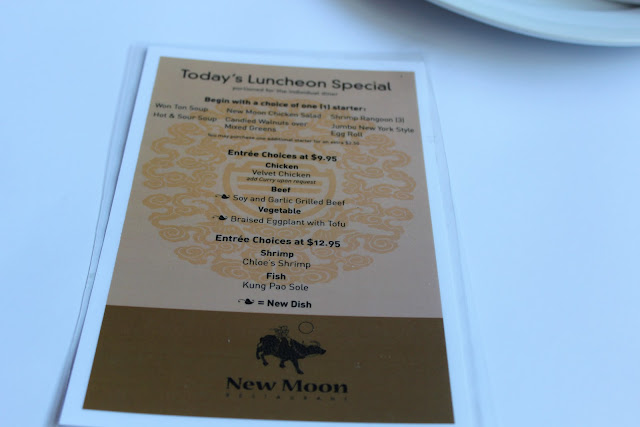 My friend Tim had told me about New Moon restaurant, in Montrose, for at least a couple of years, but I'd never made the effort. (Every trip to Montrose ended in me eating at either La Cabanita or Zeke's.) But the other day my mom was doing an errand in the area and I tagged along for lunch. 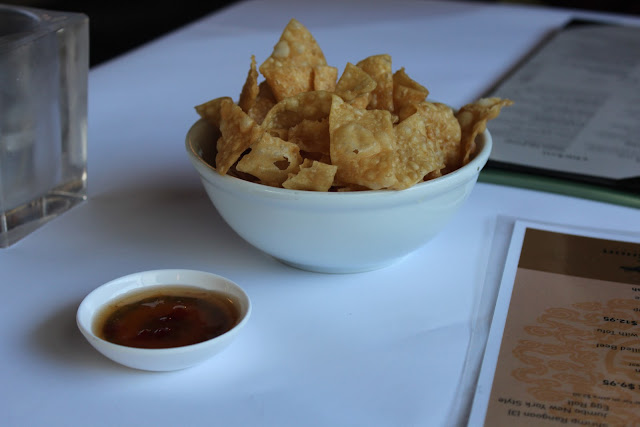 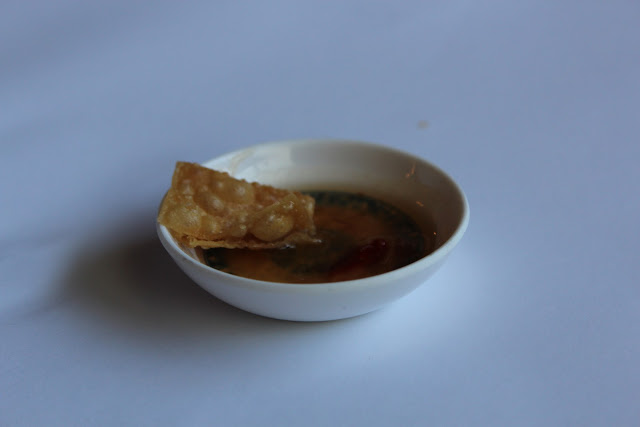 The wonton chips were delicious (if quite greasy) and the sweet dipping sauce was nice, too. 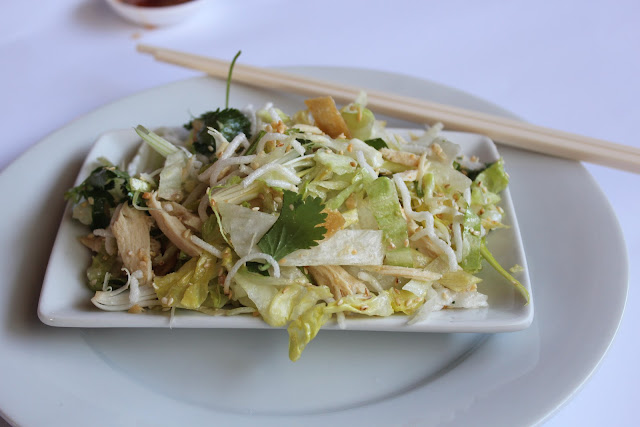 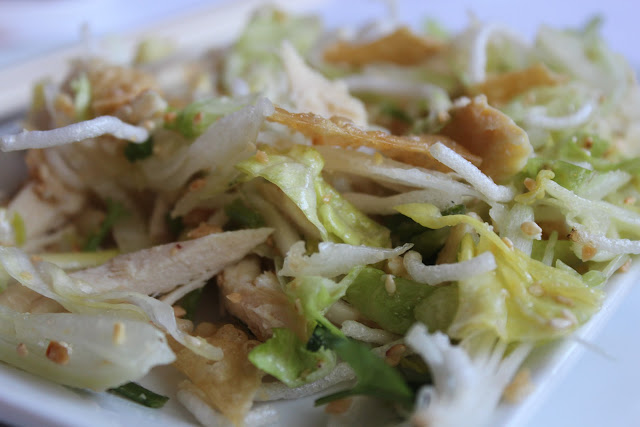 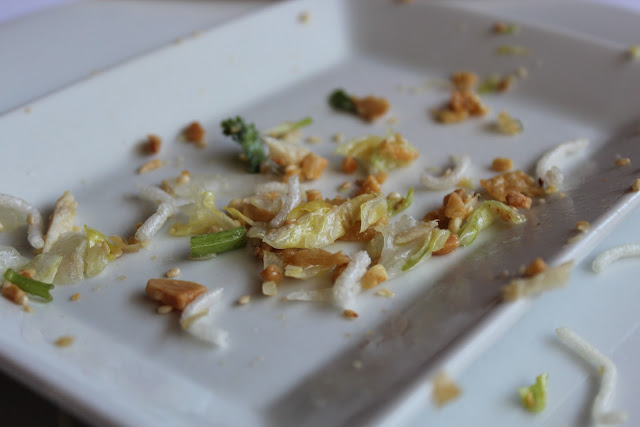 New Moon's menu calls themselves the creators of Chinese chicken salad. I Googled it; it's one of those things where no one seems to be able to say for sure, though there is evidence that their sister restaurant in Los Angeles may have indeed been the first. At any rate, I had to try it. (The available lunch specials came with one starter and the option to add a second for $2.50, which we both did.)

It was good. But I didn't like it as much as the Chinese chicken salads at Yang Chow or Fu Shing. The dressing was very light. I see what they're going for here, they want the flavors of the salad to be the main attraction, and I respect that. But I felt the salad needed a little more dressing. (So I mixed some of the sweet dipping sauce in with my salad, which made it much better.) 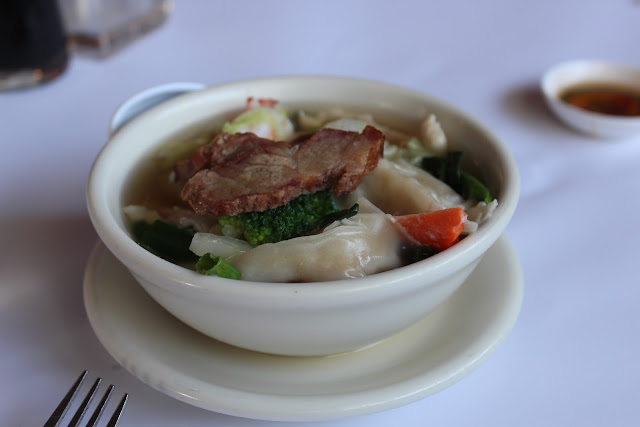 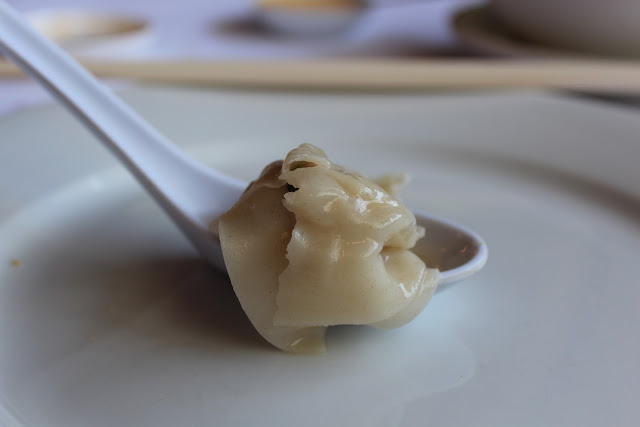 My mom had the wor wonton soup and she absolutely loved it, proclaiming it probably the best she has ever had, full of chicken, shrimp, and pork. I tried a bite with the broth and wonton. It was good, but that Yang Chow spicy wonton soup has ruined me for all other wonton soups. 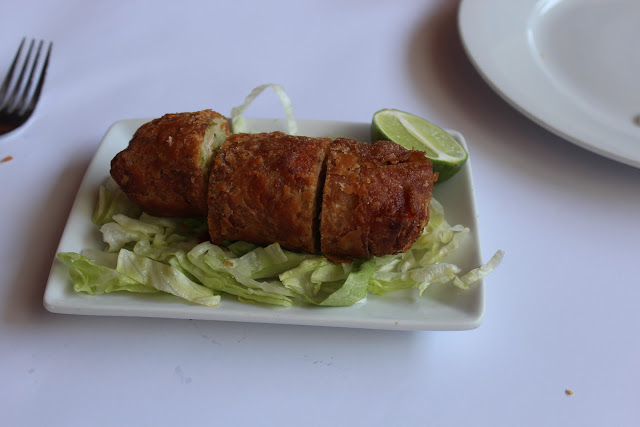 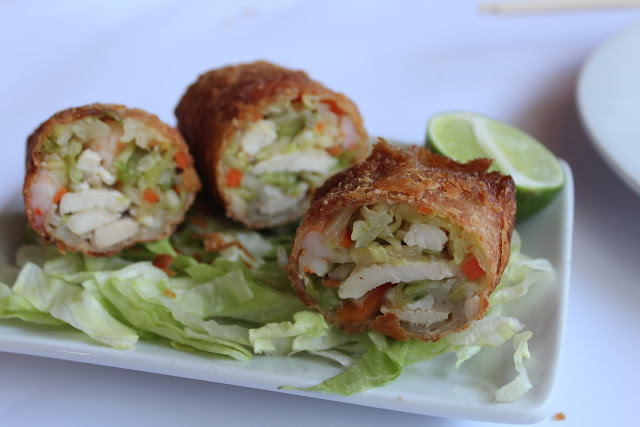 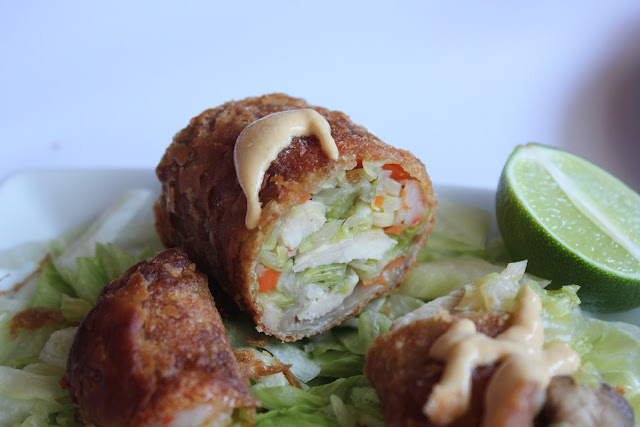 I also had the "Jumbo New York Style Egg Roll." It was full of veggies, chicken, and shrimp. I prefer the egg rolls I get at Fortune House in Brooklyn to this one, but it was a decent homage. 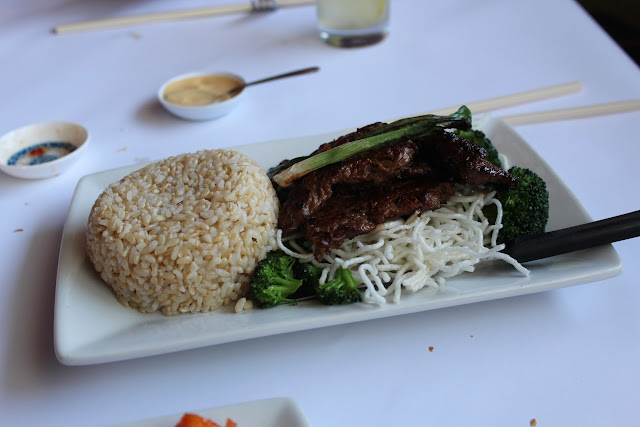 My mom had the soy and garlic grilled beef. She hated it. I tried a bite, too, and did not like it one bit either, finding the beef really tough and much too salty. The friendly waiter mentioned that a lot of people absolutely love the dish, but some people don't care for it at all. We were definitely in the latter camp, and he took it off the bill without batting an eye. 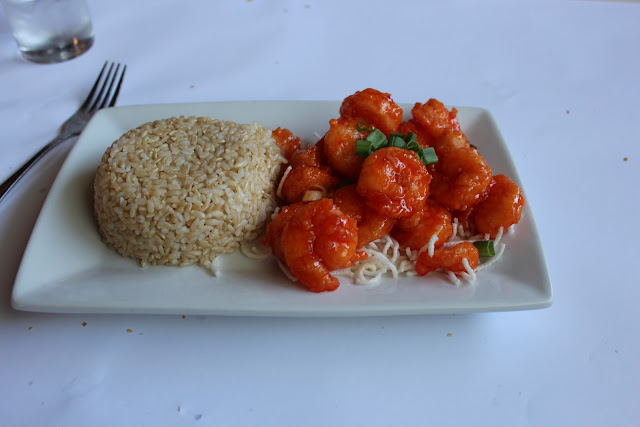 I had the "Chloe's Shrimp." I loved them. Once upon a time my favorite Americanized Chinese dish was the sweet & pungent shrimp at Panda Inn, a dish that has been gone for a long time. (They have a dish called "sweet & aromatic shrimp" these days that claims to be the same thing, but it's not.) These shrimp at New Moon are as close to those sweet & pungent shrimp as I have found in the last decade. They are quite sweet, they could have used some ginger, but delicious nonetheless. According to the menu, it's their most popular entree, a fact that does not surprise me.

I definitely liked New Moon and if I still lived in the area I would unquestionably return from time to time. I doubt I will go back on visits to the Pasadena area, as there are only so many meals I have time to eat, but my mom has already announced that in the fall when the weather gets cooler she will be returning to purchase the wor wonton soup by the quart.
Posted by JustinM at 10:00 AM

Even if they invented it don't mean they perfected it, which seems to be the case. Your shrimp look scrumptious. Also, are you back in NYC now? HEading out there end of April.