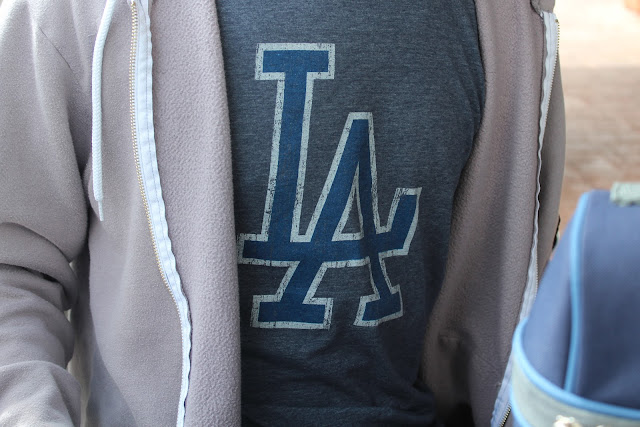 When I learned months ago that the Angels would play the Reds on opening day, I immediately thought of my friend Dave, a Reds fan. And then when I decided to come out to California for a couple of weeks, I had to make sure I watched the game with him. So yesterday I headed over to Old Town to get lunch with Bryce and Lucy at Dog Haus Biergarten before baseball started. Bryce was wearing a shirt of his beloved Dodgers. 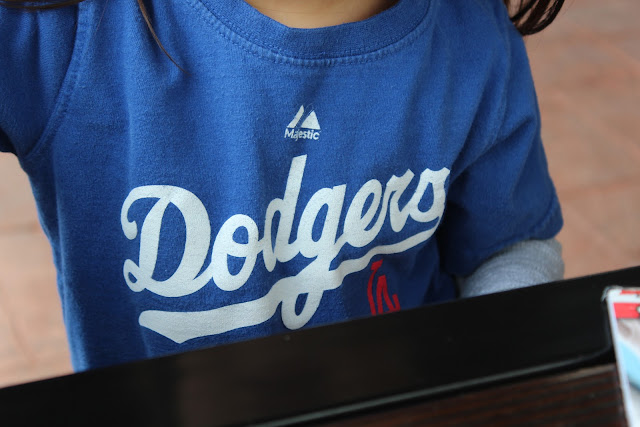 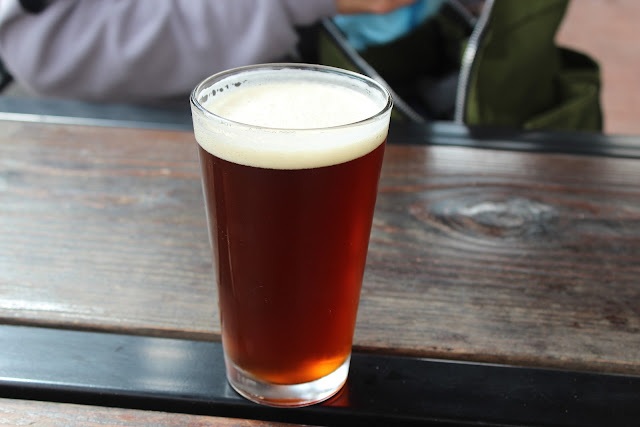 Hangar 24 to start the day. 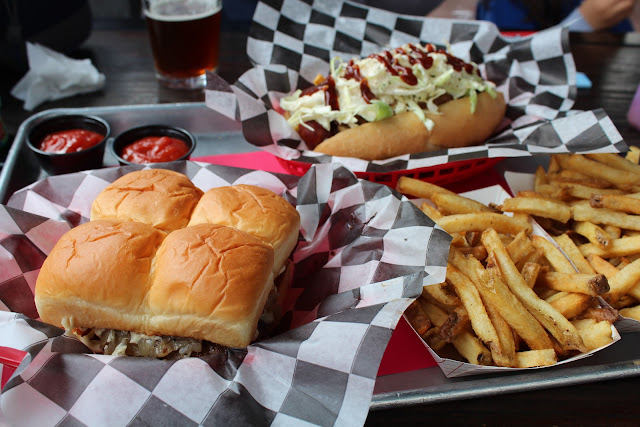 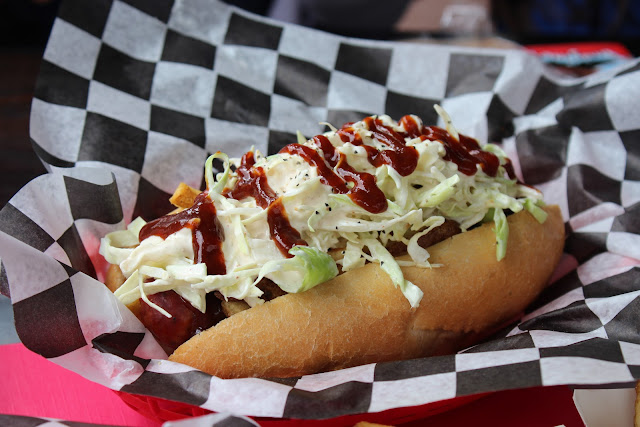 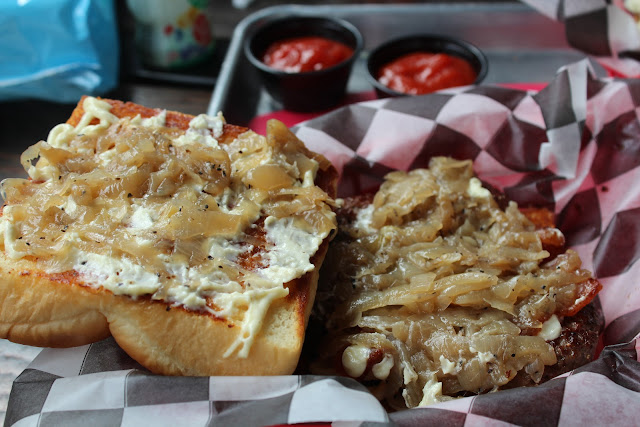 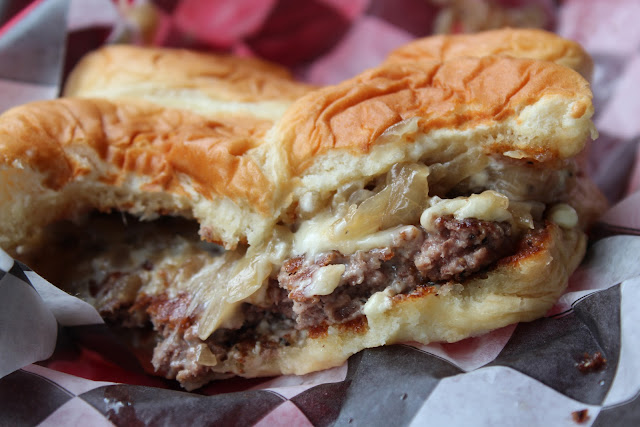 The Mr. Stivic (three-pepper kielbasa with slaw, barbecue sauce and fries) for Bryce and the Holy Aioli (cheese, bacon, caramelized onions and garlic aioli) for me. 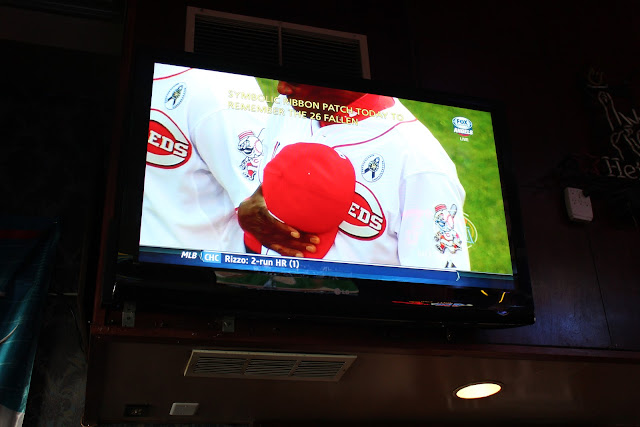 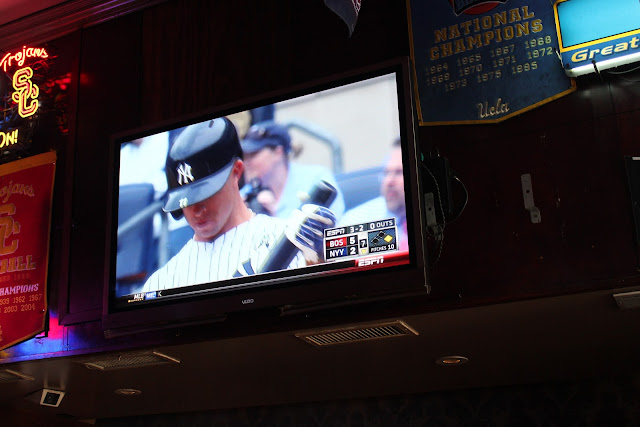 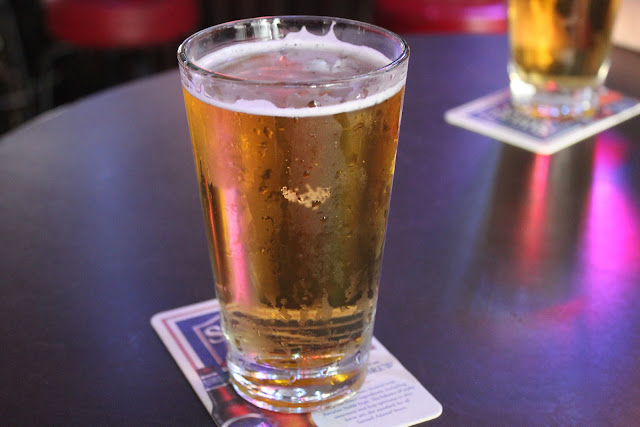 Then I hit the 35er to meet up with Dave and watch baseball. We drank Dos Equis and saw the Angels-Reds, Yankees-Sox, and Dodgers-Giants. 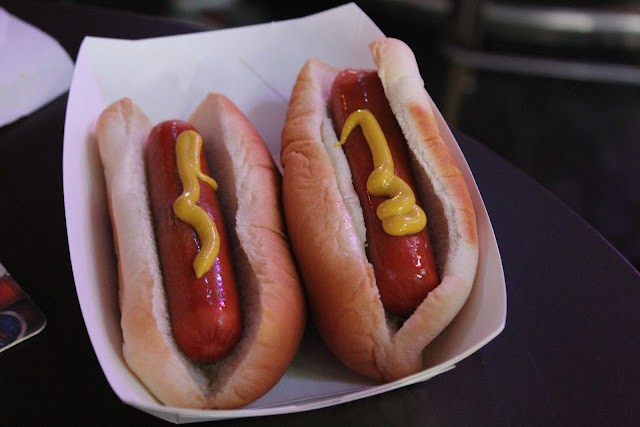 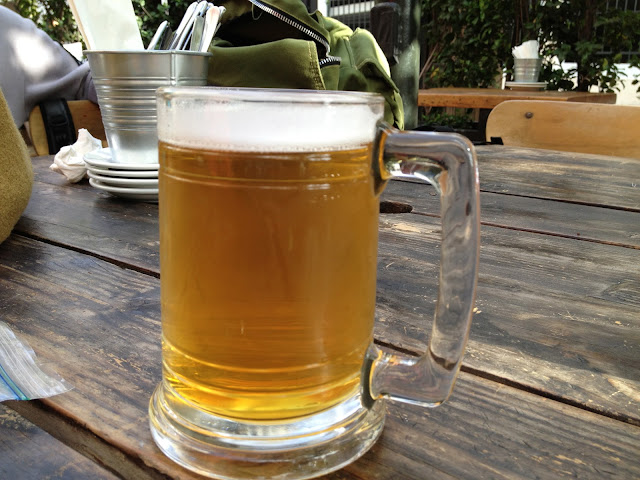 The Angels-Reds went into extra innings so we headed next door to Kings Row to watch it, meeting up with Bryce and Lucy again, as well as Tracie and Carla. I switched from Dos Equis to Noble Ale Works' "Pistol Whip'd Pilsner." 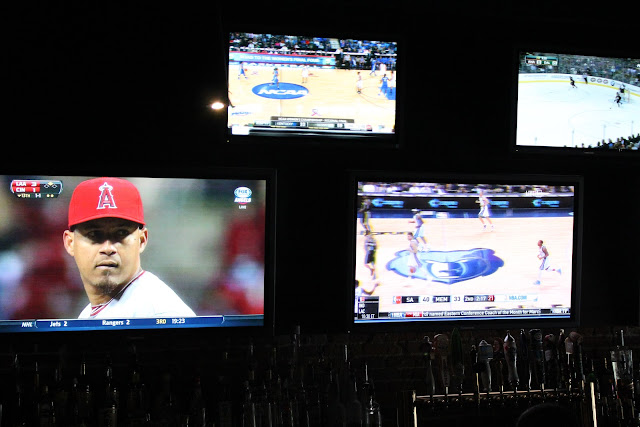 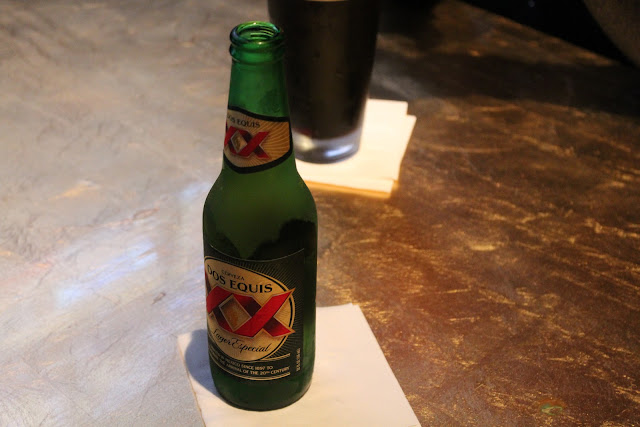 The game continued into the 13th inning and the sun went down, so it was off to 72 North, where I returned to Dos Equis. 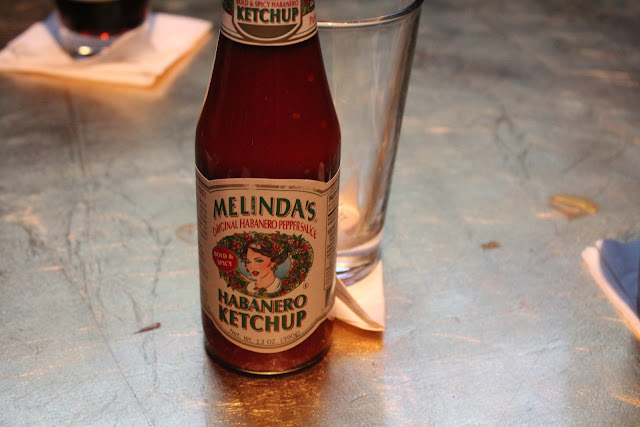 Tim showed up and gave me a bottle of habanero ketchup, because my friends like to give me condiments. 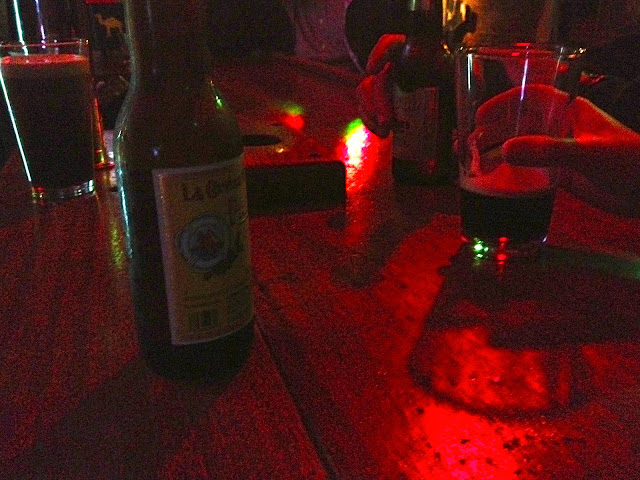 After the Angels finally won in 13, Tracie and I headed to the Old Town Pub to watch the Cardinals-Diamondbacks. I was craving a Red Stripe but they were out, so I had a Pacifico. 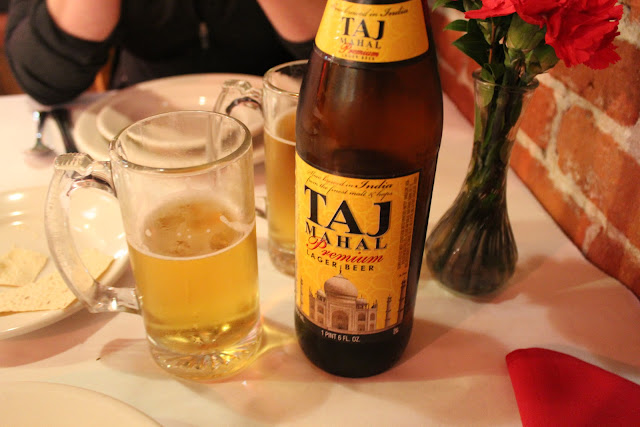 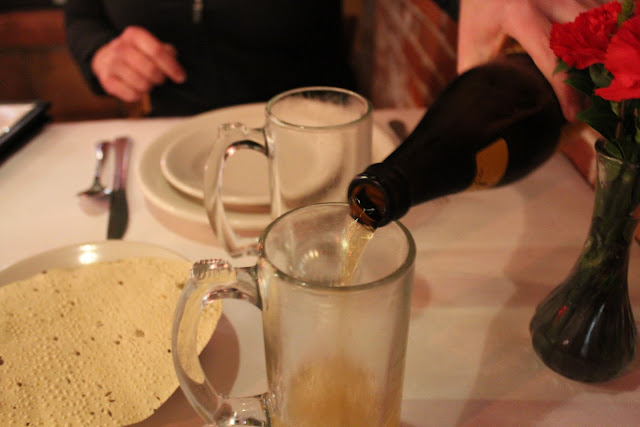 Finally, we needed dinner, so we stopped into All India Cafe. We started with Taj Mahal. 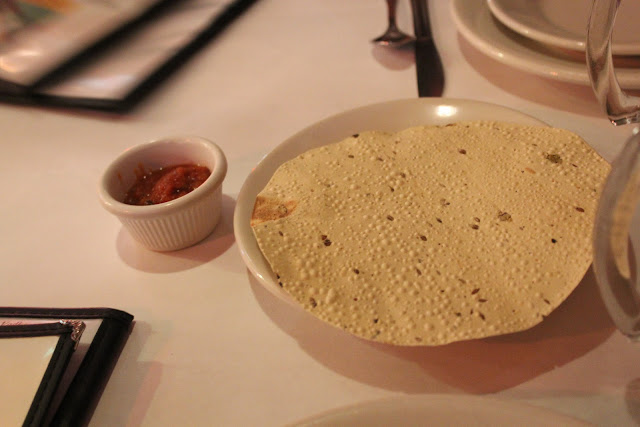 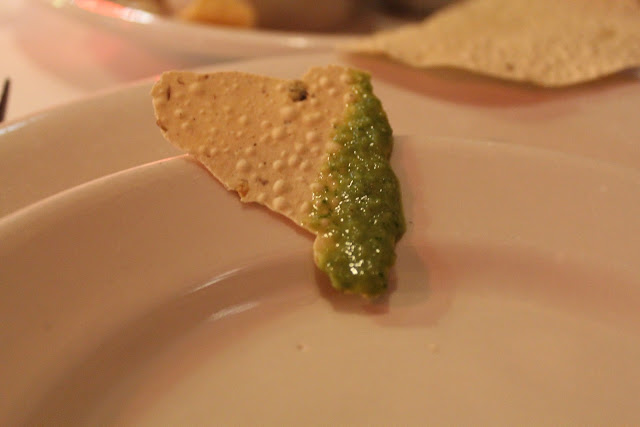 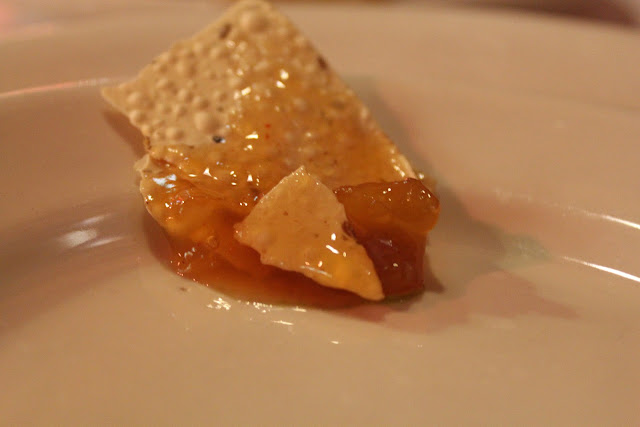 We started with mixed chutneys, two of which we loved. 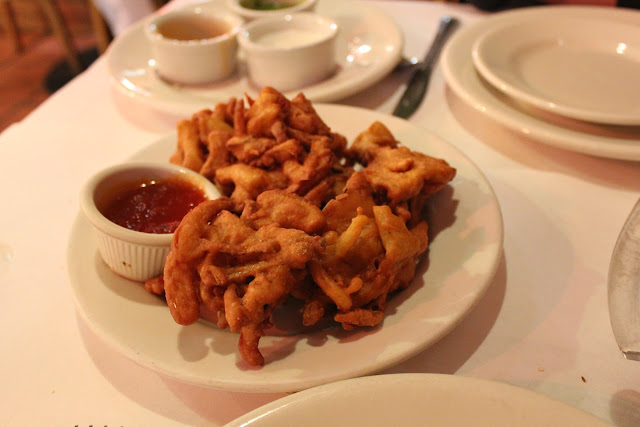 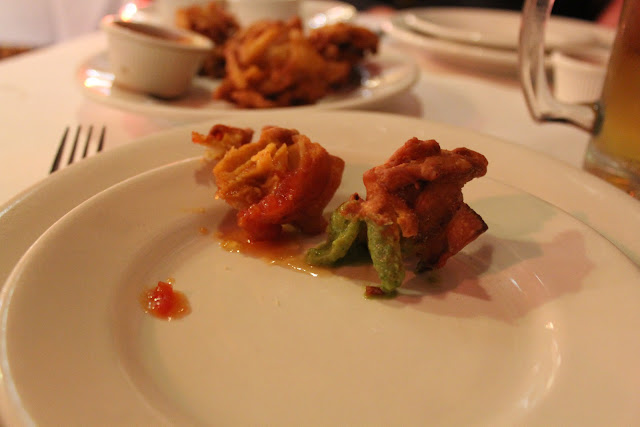 And then onion pakoras, literally seconds out of the fryer, hot and crispy outside, with juicy onions inside. 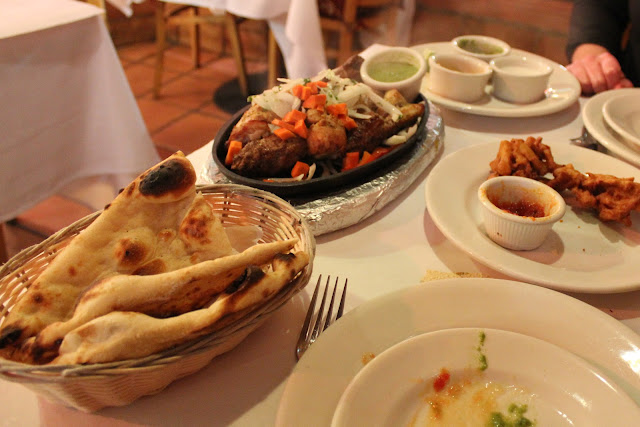 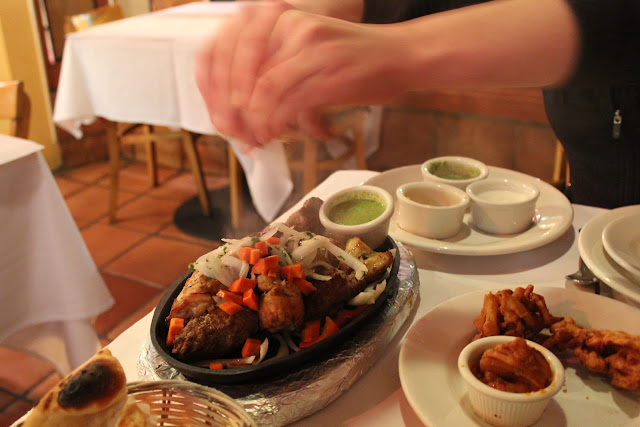 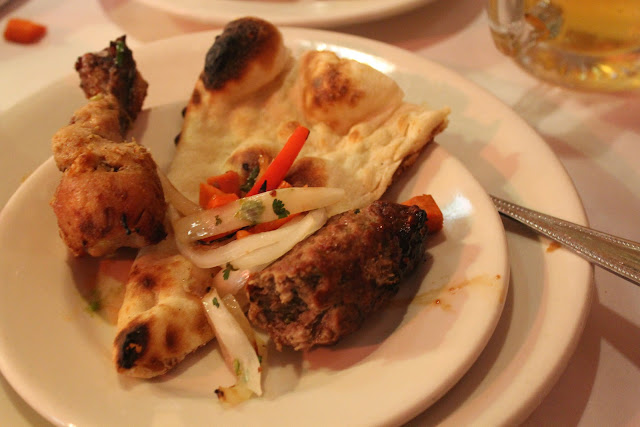 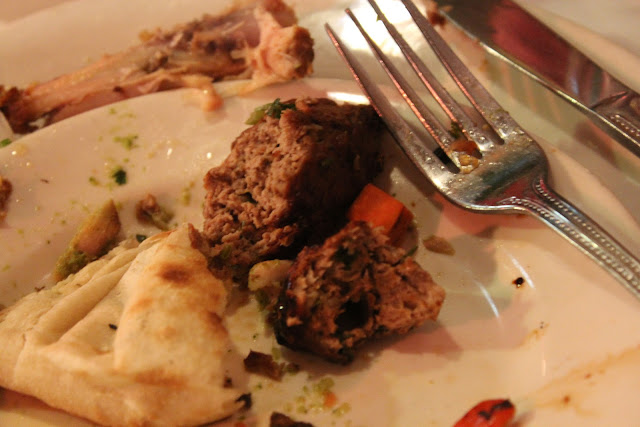 We split the Tandoori Platter: chicken tikka, tandoori chicken, sheesh kabab and boti (lamb) kabab. All of it was delicious. 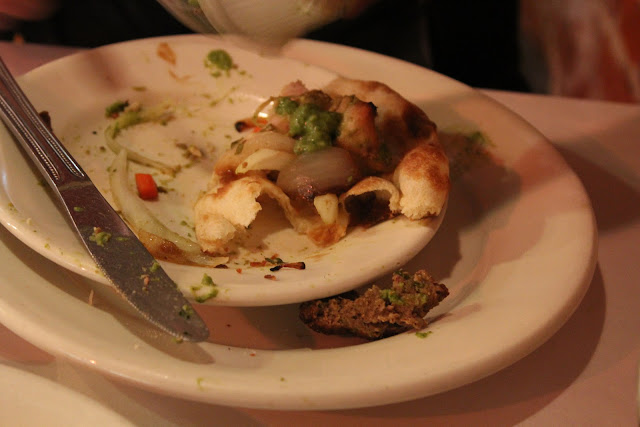 I can't argue with that.

It was a great day but I'm heading back to New York tomorrow.
Posted by JustinM at 1:00 PM

Dodgers suck... They are like the mets of cali...

She brought her lunch with her from home, although she shared some fries.

It's funny, with all that great looking food the thing that excites me the most is FREE HOT DOGS!!!

When baseeball season starts, you know all is right in the world. You sir are a true baseball fan. I spent opening day at my office desk. Had to watch the rebroadcast evening game with Kershaw banging the Giants. We got them back last night though.

I concur with Anonymous, the Dodgers do in fact suck. Although with their $230 million payroll they're more like the Yankee's than the Mets.