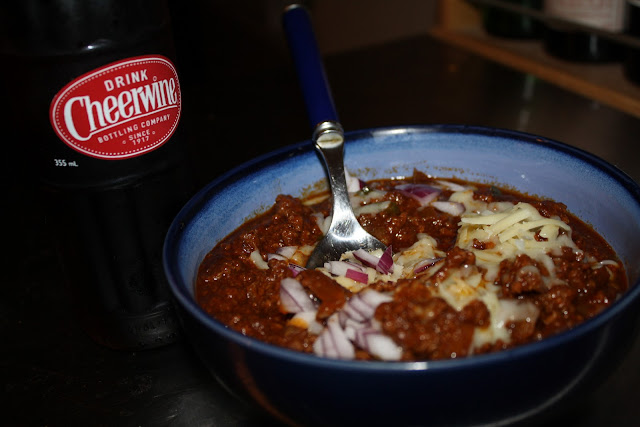 I love the first real rainstorm of the fall, and yesterday was a good one. What better thing to make than chili, I thought to myself. I make chili several times per year, but often I cut corners and cook it in the wok for just a few minutes. It doesn't really have time to meld like I want.

But every once in a while I go all-in and cook it all day in the slow-cooker. Yesterday was one of those days. 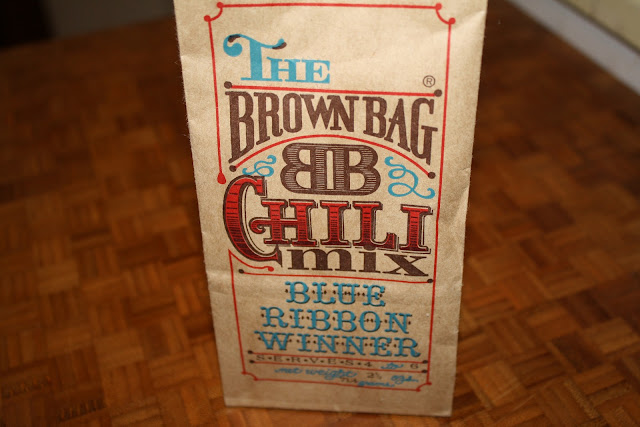 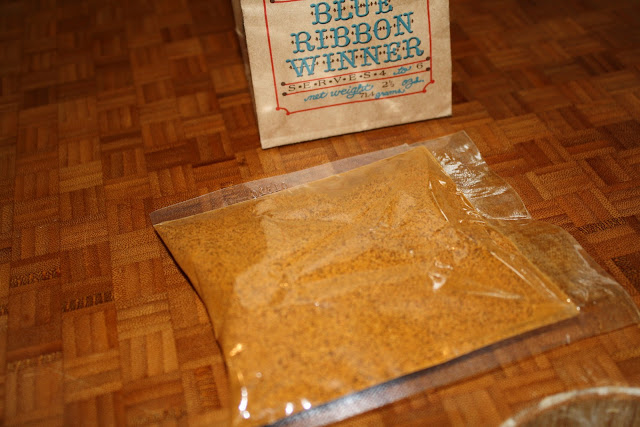 Years ago I used to buy this Brown Bag Chili Mix at the local butcher, but then it disappeared. There isn't a whole lot of information about it on the internet, so I figured maybe they went out of business or stopped distributing in this area. I moved on to another brand.

Then two days ago I discovered it at Whole Foods. I quickly grabbed it off the shelf. 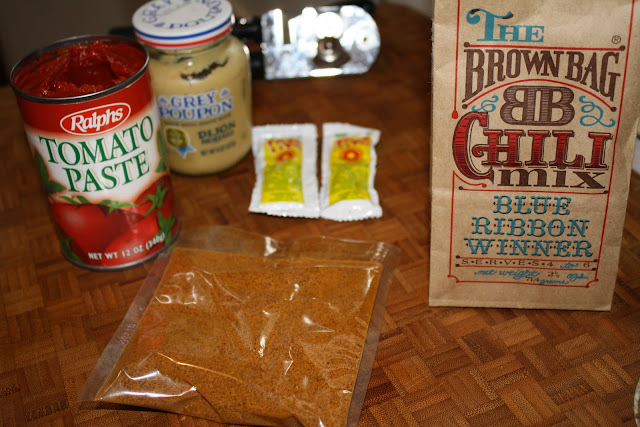 There are instructions on the package, but like the best recipes, I view them more as suggestions. For instance, it says to add 8 ounces of tomato sauce; I add about 6 ounces of tomato paste, 16 ounces of water, and then a couple of tablespoons of mustard.  (I usually use yellow mustard but did not have any yesterday so I went with Dijon.) And then I squirt in two packets of Taco Lita hot sauce. 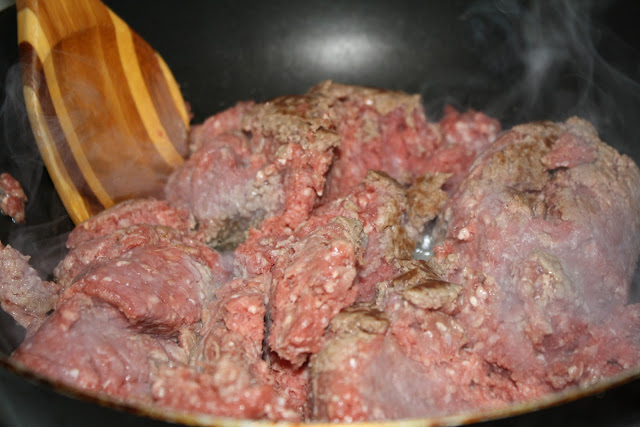 Next I browned some ground beef. After I wrote about my burger on Monday and how disappointed I was in the quality of the beef at Bristol Farms, my dad sent me an email detailing why Bristol's quality has declined over the years. So I won't be getting it ever again. I went to Taylor's and bought some of their ground beef, with which I have never once had a problem. 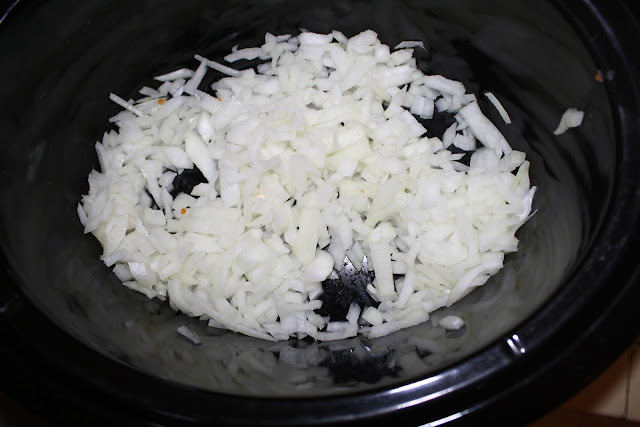 I added the chili mix and poured it all on top of an onion that I had chopped and thrown in the slow-cooker. 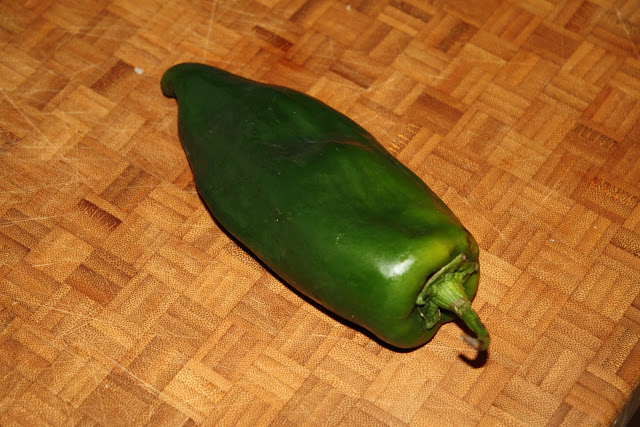 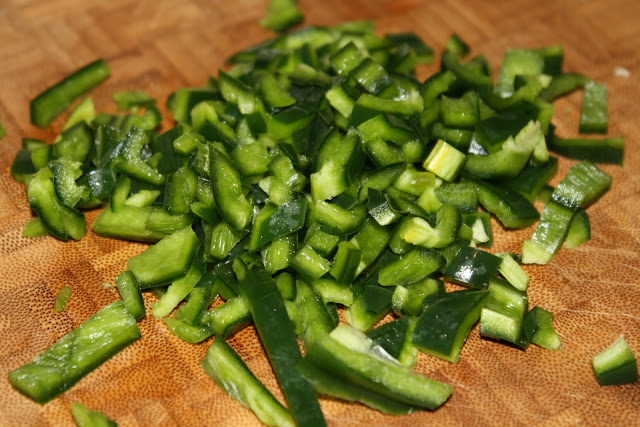 Tracie mentioned that she had a poblano pepper that she wasn't going to use. I said I would definitely take it. I diced the pepper and added that as well. 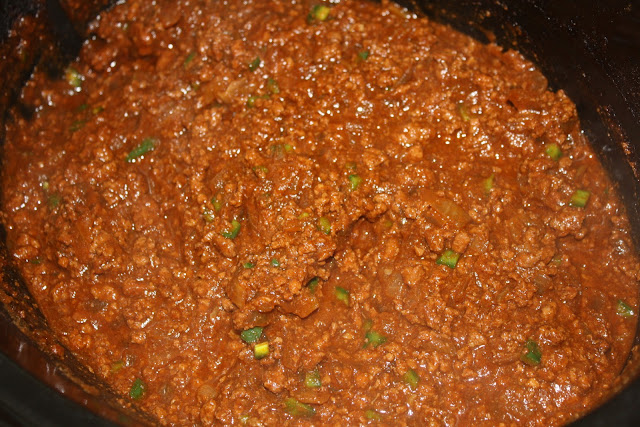 This is what the chili looked like after seven hours. You could smell it from down the street. 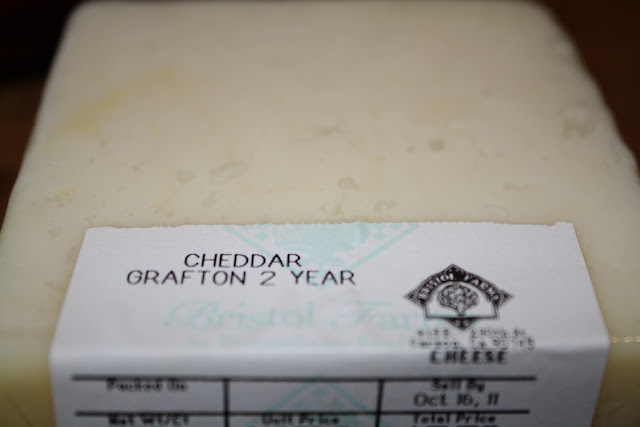 I wanted a really good cheddar to top the chili, and they don't come much better than Grafton's 2-year aged cheddar, a flavorful cheese that goes beautifully with full flavors and big wines. 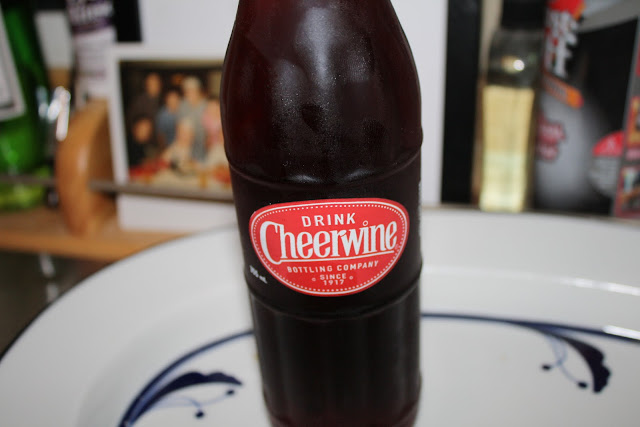 Although the only wine I was drinking this evening was Cheerwine, a cherry-flavored soda from North Carolina that has been made the same way since 1917. (If you like Cherry Coke and have never tried Cheerwine, I encourage you to try it just once.) I developed a strong craving for a bottle yesterday, so I bought two. (When I announced to Elizabeth that I had bought one for her, too, she was quite happy.) I figured, correctly, that the cherry flavor would go well with the chili. 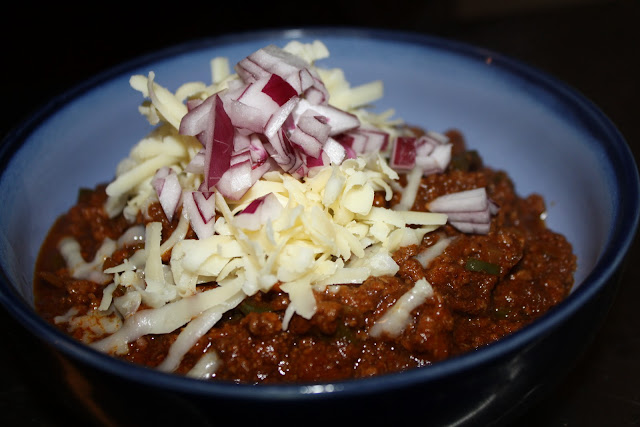 I topped my bowl with the cheddar and diced red onion. 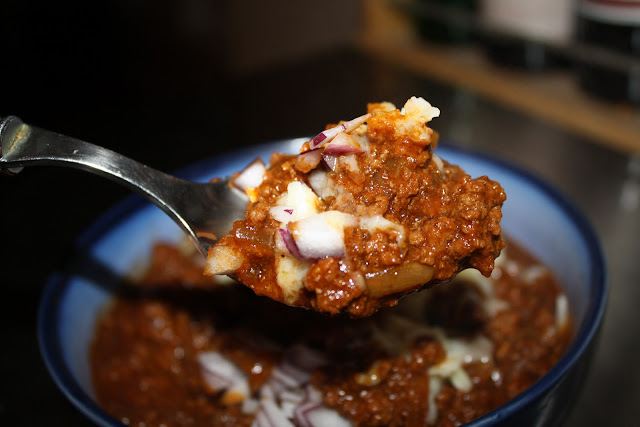 Like I wrote earlier, most of the time when I make chili I cut corners. But there really is no substitute for this slow-cooked version. The best part is that there is still lots of it left and it's not raining today. As I type these words at 7:57 AM, it is a cool, sunny morning. I'm thinking I might get some hot dogs dogs later, throw 'em on the grill, and top them with the leftovers....
Posted by JustinM at 11:12 AM

I met a pal at Le Grande Orange for a beer yesterday. I was hungry when I got there and they were featuring chili as their soup of the day.
At $6.00 for a huge bowl (I also asked for some tortilla chips on the side for dipping) it was the best and most satisfying deal of late. And it was damn good. As good as it was, your looks like it would kick its butt. And the chili dog idea - inspired!

I have never made slow cooked chili, put mustard in it OR tried Grafton...clearly, things need to change at my house. That looks like heaven.

Seriously this looks insane. I don't know why you ever get fast food when you can make things like this.

Never replied on your blog before though I do read it daily, but I just wanted to say this post now has my girlfriend going out to get supplies to make chili with. Thanks! :)

Nosh: Well, if you lived in Pasadena you could have come over for leftovers and it would have been an even better deal.

Fritos: I read a recipe years ago for hot dog chili with mustard in it, I made it, and I have never made chili without it since then. It gives it that extra tang that I love. And slow cooking is the only way to go if you want the chili to be all that it can be.

Michelle: Well, everyone seems to like the fast food reviews. And some of the time I like eating it, too!

Tony: Awesome to hear, man. Please let me know how it goes.

The chili was delicious. But that was the best Cheerwine I have had!

never heard of bristols, but as i've heard you discuss it numerous times, im curious as to what your fathers email entailed. my butcher shop has been on the slow decline, and im wondering if it might be a relatable offense.

Nothing too major, but just how they have a history of being bought by other companies and now have a major debt to service, which they do by cutting corners where they can - like quality of product. They are getting by on their name and reputation from 15 years ago, not what they are now.

Kelly and I made this tonight for the widow of Elmer Dills (the food critic). She loved it!

FYI.....I was at the Ralphs in Hastings Ranch today. They have the brown bag chili mix.

Also available at Ralph's in La Canada. Bought some last night to try this weekend. Thanks for all the great suggestions on where to eat in Pasadena!