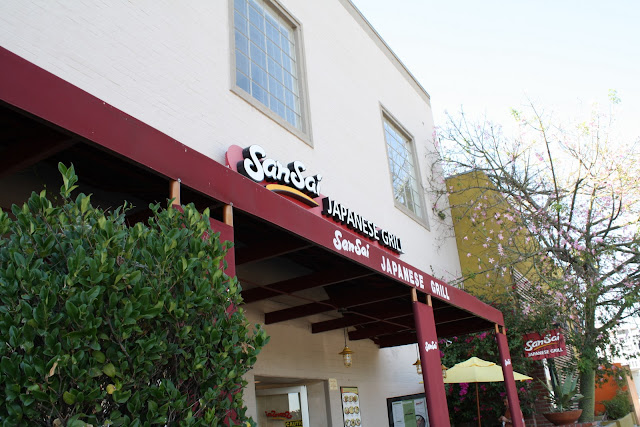 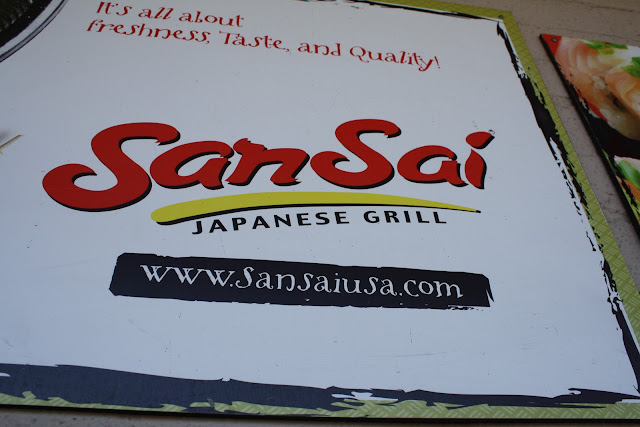 Back in June, a reader named Howard emailed me and mentioned he would like to see me review SanSai Japanese Grill on Lake Ave. I said I would, although I wasn't sure when I would get around to it. I'm not a big fan of Asian fast-casual chains. Sure, I eat at Panda Express when they come out with a new item, and every once in a while I swing by Pickup Stix to get some cream cheese wontons (when they're 25 cents each on Wednesdays), but overall those places, as well as Pei Wei, Hibanchi-San, and Yoshinoya just leave me unfulfilled. I figured SanSai would be similar. 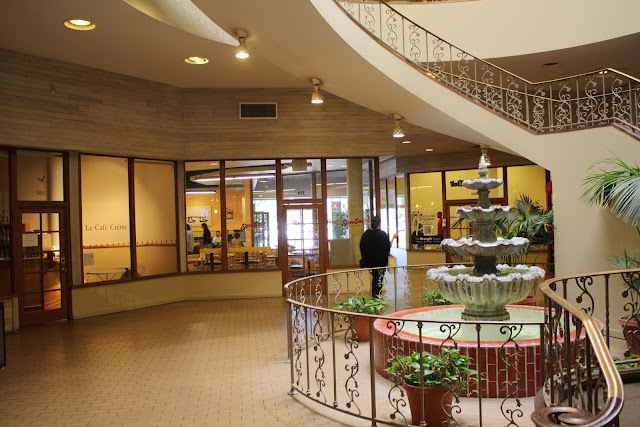 On Sunday, however, Elizabeth and I were visiting a shop on South Lake Ave (Anthropologie, of course). I was hungry and she was not. So I figured why not give SanSai a try? There is a back entrance to the restaurant on Shopper's Lane; the front entrance is in the lovely Colonnade mall.

Even though it was after the peak lunch hours, the place was crowded. I looked at the menu for a moment and decided to order a shrimp tempura plate. The entree comes with two of their "signature salads" and I was trying to choose which ones to order when I saw a plate go by. They did not look particularly good so I changed strategies. I ordered three side dishes: seafood spring rolls, potstickers, and shrimp tempura. 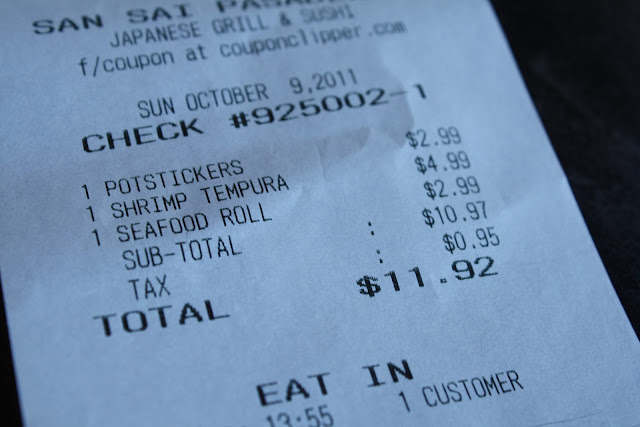 It was a reasonable amount, as long as the food wasn't terrible. We took a seat on the patio to enjoy the warm day. The food was ready in a little over five minutes. 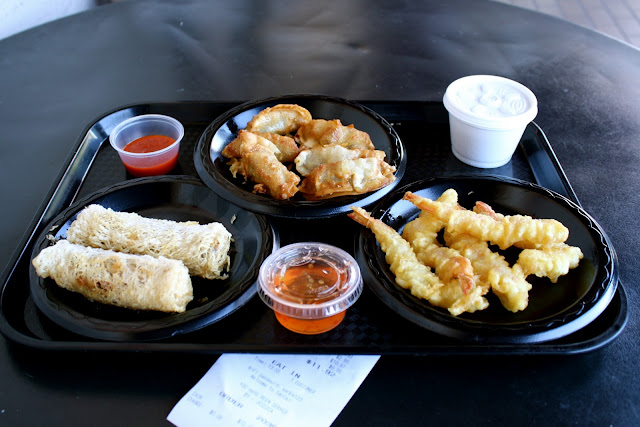 It wasn't exactly health food, but I'd walked several miles in the morning and was ready for some fried goodness. 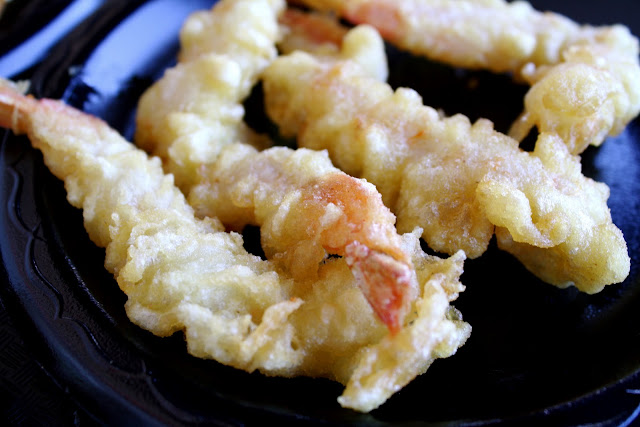 We'll get my least favorite out of the way first: the shrimp were tasty but they had not been fried at a high enough temperature and thus the tempura batter was not crispy. It was more of a soggy, semi-congealed batter. In other words, the one thing that ruins tempura for me. 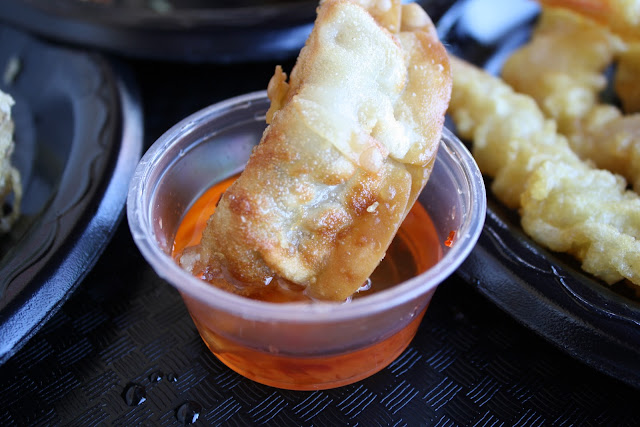 I've never had SanSai's potstickers before but I've had them hundreds of times, if you know what I mean. They are the same gyoza you get everywhere, which means they're good as long as they are cooked long enough. And these were. There was nothing memorable about them - other than the tasty sauce - but at $2.99 I would have no problem ordering them again. (I've certainly paid more than twice that much for the identical dish at other restaurants.) 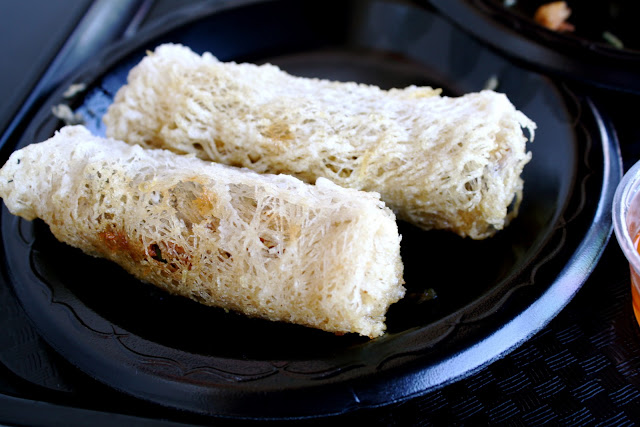 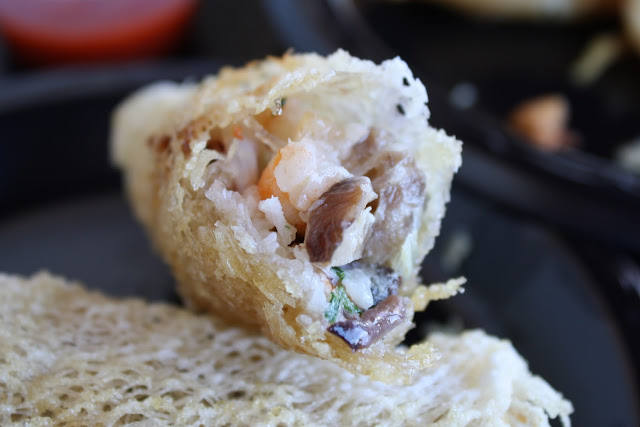 The seafood spring rolls, however, were something I'm not sure I've ever had before: wrapped in a rice noodle coating, fried crisp, and full of shrimp and vegetables. I really enjoyed them. Also costing only $2.99 (the only thing I didn't like was the most expensive thing I ordered; isn't that always the case?), I will absolutely try these again.

I didn't love SanSai, but I liked it much more than I thought I would. I will return at some point and try one of their entrees, possibly their sushi, and maybe even one of those signature salads.
Posted by JustinM at 10:00 AM

The spring rolls were good. And very interesting. I had not had them before either.

Seafood spring rolls look really interesting... I might check this out. THANKS!

As soon as I saw SanSai, I wondering if it's the same SanSai that we have here in St. Louis. Checked out the website, and not only is it the same, but for whatever odd reason SoCal and the St. Louis area are the only two places where they exist. I wonder how that happened?

That is funny, Mike. I just went and read the articles on their website. Dan Burns, a co-founder of the chain, is a St. Louis native. Once the company started succeeding in CA, he wanted to open some in his hometown.

Lots of L.A.-St. Louis harmony going on... you know, like how Pujols is going to sign with the Angels in the offseason. (Only kidding. Unfortunately.)