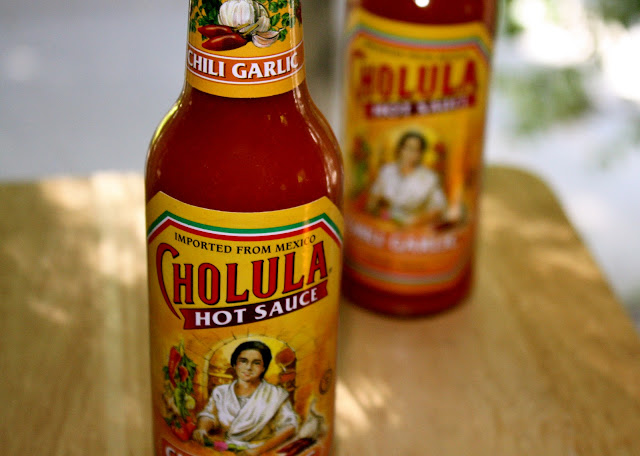 I get a few emails per week from people asking me to review products or post various advertisements on this blog, usually in exchange for something. But that's not why I started this - really I just started it to share photos with friends. It's been fun to have so many new people discover my words and photos, but still, I don't do things any differently than I did back when there were only ten people per day reading this. I don't do this for money or free stuff, so 95% of the time I say no.

But if I am asked to write about something that I already like... well, why not? And I have liked Cholula for a long time - since first trying it when I was 17 years old at Pie 'n Burger, grabbing breakfast with some friends one Saturday morning. So a couple of weeks ago when I got an email from a PR rep for Cholula, asking if I would be interested in some free Cholula for "National Chili Garlic Week," I said of course. (If you're been reading for more than a week, I'm sure you know how much I love both chilis and garlic.)

A week or so later I received two bottles in the mail. It's been a long time since I've had a the "Chili Garlic" flavored Cholula. (Many years ago I kept a bottle of the stuff at work to use with the pizza that we would get two or three times per week... and I diced up tiny pieces of garlic and stuffed them in the bottle to make it even more garlicky.)

I'd planned to write about this at the start of the week, but I had other things to write, so today I will share with you some of the things I've eaten lately: 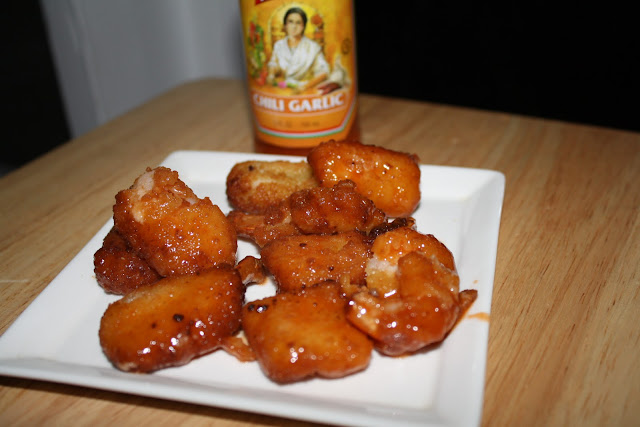 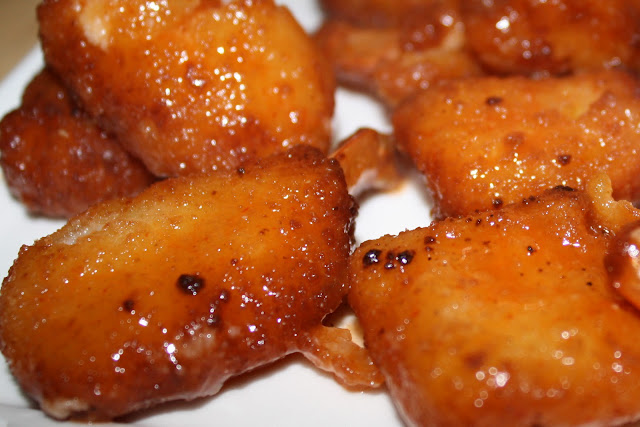 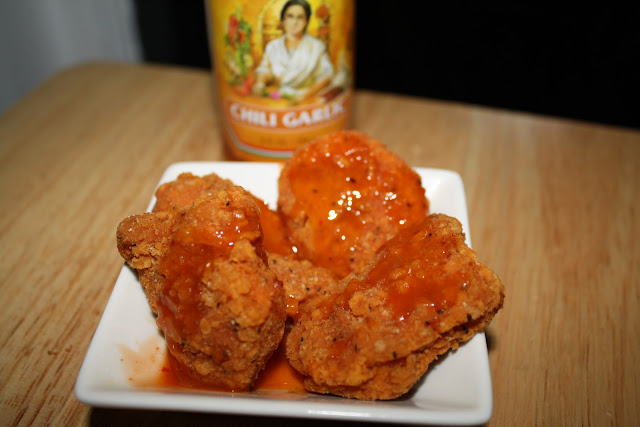 One day we went by Wendy's to get some spicy nuggets. I decided to douse them in the chili garlic sauce to see if that improved them. It did. 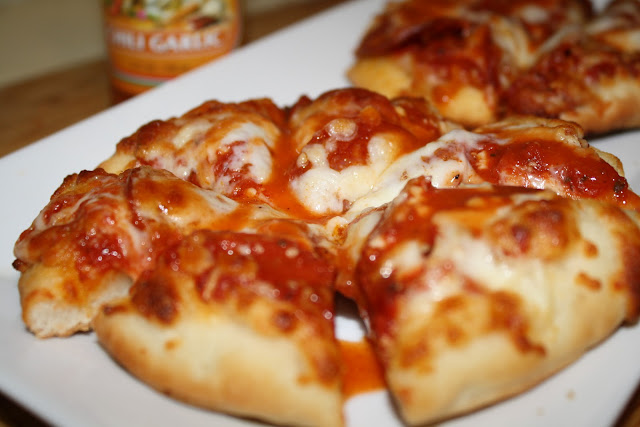 For dinner one evening I cooked some mini pizzas from Trader Joe's. They were very good but a little too doughy - there wasn't enough sauce or cheese on them. So I added several shakes of Cholula, which improved them dramatically. 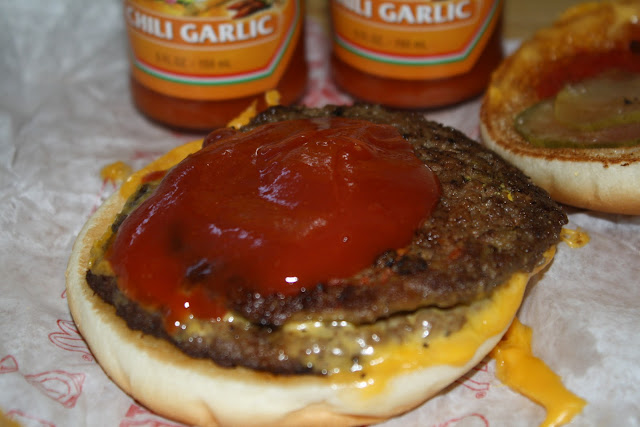 I'm not a big ketchup fan, as I wrote the other day when detailing my new love affair with Sir Kensington's Gourmet Scooping Ketchup, but there are a few things that I really like with ketchup: scrambled eggs, In-n-Out's fries, and definitely McDonald's McDouble. I don't know why, but I find ketchup (and extra pickles) complements it nicely. So this time, I mixed a packet of McDonald's ketchup with several slugs of Cholula. It was still good, but this was the only item here that I did not feel was improved with the addition of hot sauce. 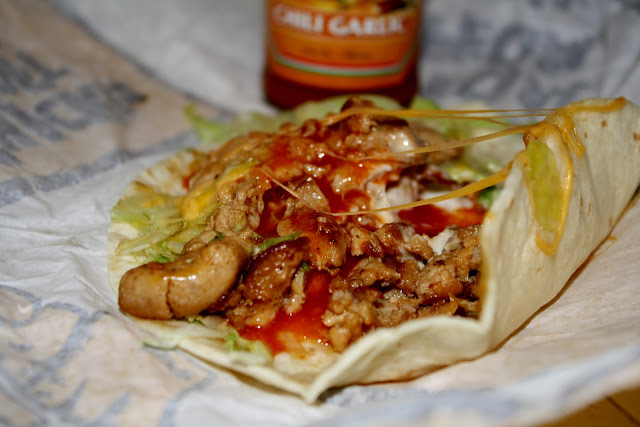 Of course I also had to try it on my beloved Del Taco chicken soft taco. And it was delicious. Del Taco should try a promotion where they serve these tacos this way; I bet it would be successful. 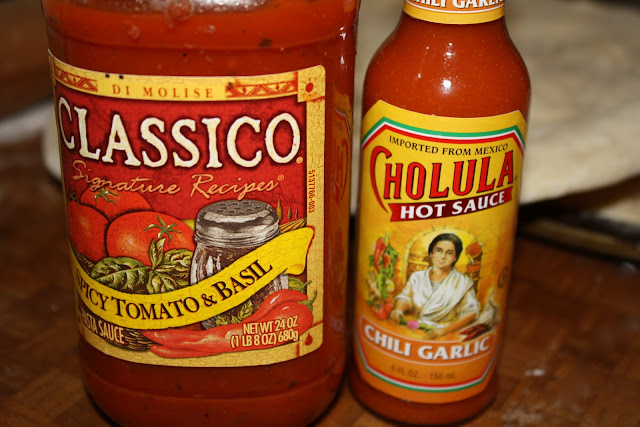 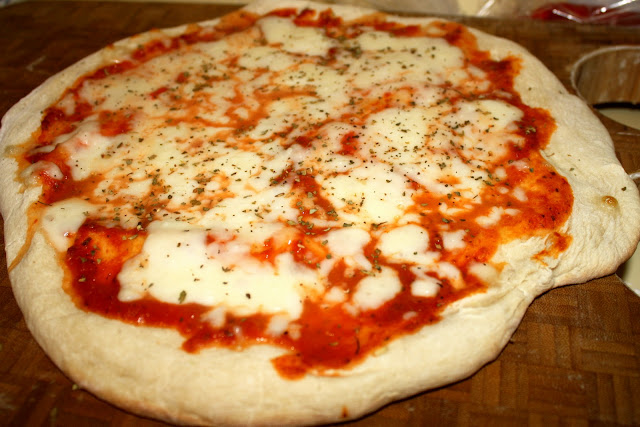 Normally, on Thursday nights, I do one of two things: go to the South Pasadena farmers market with Elizabeth or have friends over for dinner and wine. But last night was game 6 of the World Series, so I decided to keep it simple and just make a pizza at home. (Actually I made two pizzas, but I'm only showing you the one that featured Cholula.) There was nothing fancy about this: Trader Joe's dough and fresh mozzarella with some dried herbs. But for the sauce, I mixed the "spicy tomato and basil" pasta sauce that I usually use, but I added several drops of Cholula to it (before blending it in the mini-prep to make it a smooth consistency.) 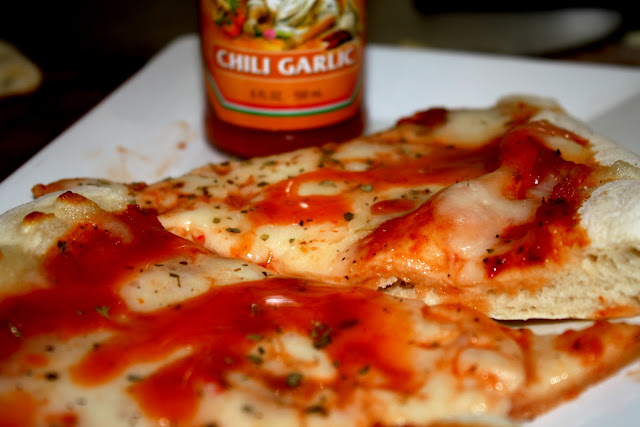 It was delicious. But once you get locked into a serious drug hot sauce collection, the tendency is to push it as far as you can. So I added more Cholula to the slices. And it was even better.

I've never seen the chili garlic version. I'm going to have to check this out. btw, that was a helluva game last nite!

Have a great weekend!

Definitely try it, it's great.

You really can't put that game into words. The Rangers had the lead not once, not twice... not three times... not four times... but FIVE TIMES. And the Cards still won. The entire first weekend of March Madness does not have the excitement of those last four innings.

cholula makes me think about cholo or chula. orale vato. i miss l.a.

Mama Cholula is so hot. Her and Tapatio need to get together... in my mouth.