Popeyes Crawfish Festival: The Most Wonderful Time Of The Year 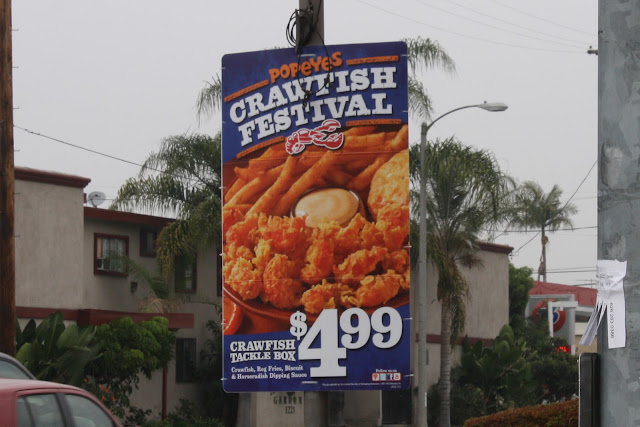 I love Thanksgiving, it's my favorite holiday. 4th of July would have to be next. Opening day of baseball season, the opening weekend of March Madness, New Year's Day bowl games... all great. But man, I love the first day of the Popeyes Crawfish Festival, too. And that just happened to be yesterday.

Crawfish were never something I thought much about until I started visiting New Orleans as an adult. And then I couldn't get enough. I ate a crawfish and fried alligator sandwich one year on my birthday; on another trip for Jazz Fest I ate several orders of fried crawfish tails at the Fairgrounds, wandering around listening to Chris Smither, Wyclef Jean, The Radiators, and for one song (which was all that we could take), the Steve Miller Band. Any list of the top 10 days of my life would probably include that one.

Two years ago, Popeyes decided to hold a "Crawfish Festival," releasing a few crawfish items. After several attempts, I was able to procure the crawfish tackle box, and I loved it. Last year I went for the crawfish po' boy and found it to be one of the best fast food sandwiches I have ever eaten. (And when it comes to fast food seafood sandwiches - which admittedly is a small sample - there is no question that it is head and shoulders above any other I have ever tried.)

Since I'd had such bad luck the last two years trying to find the crawfish items, I decided to change tack this year: I drove to a Popeyes to which I have never once been in my life. Almost all Popeyes items you see on here are from the Pasadena or Alhambra stores, but they have both been incredibly hit and miss lately. So I went to the San Gabriel location.

The girl behind the counter was friendlier than any Popeyes employee I have ever met. I inquired about the festival, was told they had them, and ordered a po' boy sandwich by itself. (The combo was $6.99 pre-tax, the sandwich a la carte was $3.99. Since I don't like Popeyes battered fries and I almost never get soda from fast food joints, it was a much better deal.) I asked if they had the "traveler" as well and she said no. I paid and stood around to wait.

A couple minutes later she told me they did indeed have the traveler, so I ordered one of those, too, for $2.99. She apologized for not knowing that.

"Yes," she replied, "and they didn't tell us anything about it." With my recent Popeyes experiences, this did not surprise me.

After a couple of minutes she started discussing the sandwich with the two cooks preparing the food. I am not fluent in Spanish like I used to be, but I could pick up enough to know that one of the cooks was claiming the sandwich is supposed to have tarter sauce on it while the other one thought it was supposed to be a different sauce. I interjected:

"It's supposed to have a horseradish sauce."

The girl picked up a container of horseradish sauce from under the counter. "This, right?" she asked.

"Okay, thanks." (The fact that I was instructing the employees on how to prepare their promotion was not lost on me.)

Not long after, my food was ready, and she handed me the bag.

"That looks good," she said as she peeked inside.

"It will be," I assured her, and took it to my car to eat. I smiled when I laid my eyes upon this: 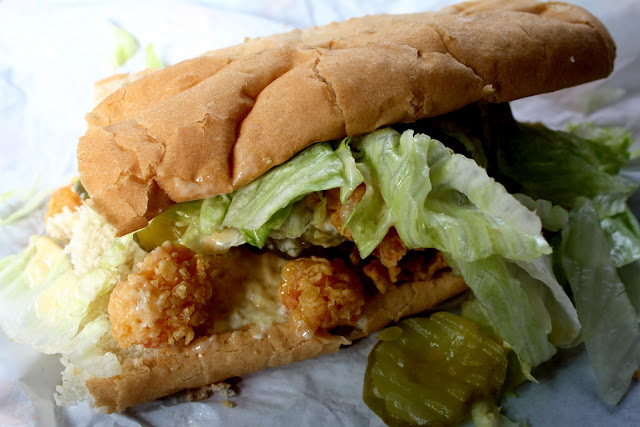 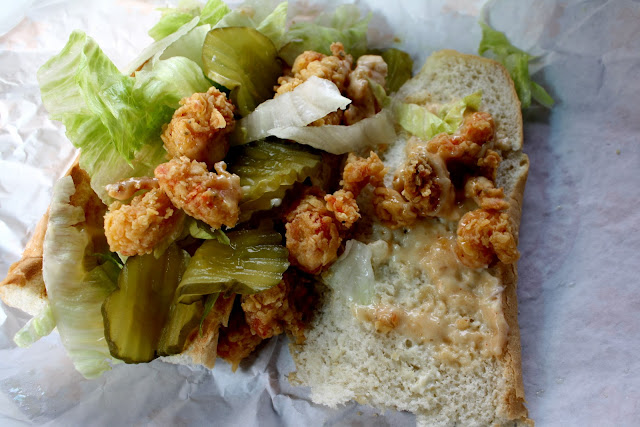 I opened up the sandwich and immediately noticed something that a lot of people have been saying about Popeyes lately: ever year that goes by, they get skimpier on their portions. I mean, take a look at my sandwich last year, the difference is noticeable. 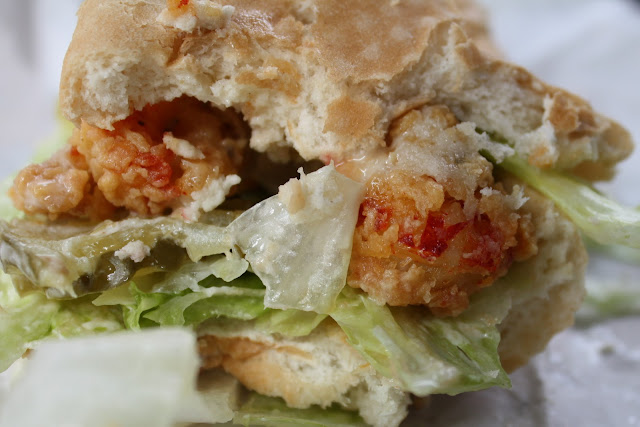 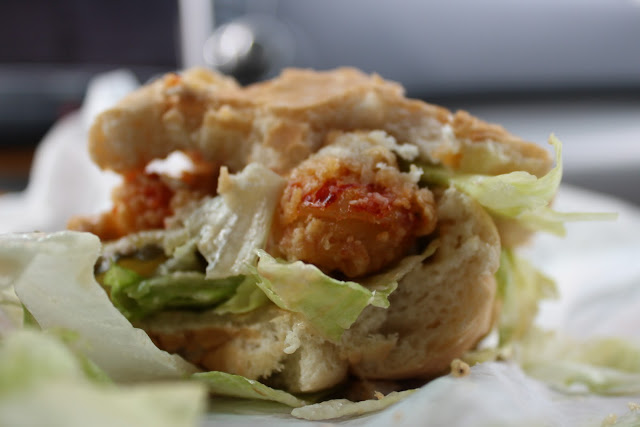 But I didn't care too much, because the sandwich was still freaking delicious. The crawfish were crispy and meaty, the bread was wonderfully soft, there were plenty of pickles and the sauce was very tasty. 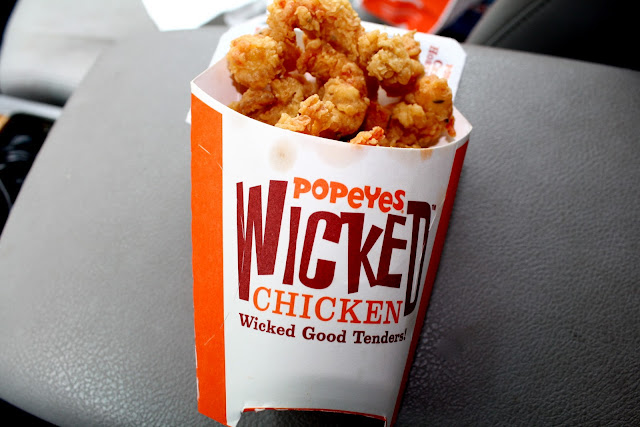 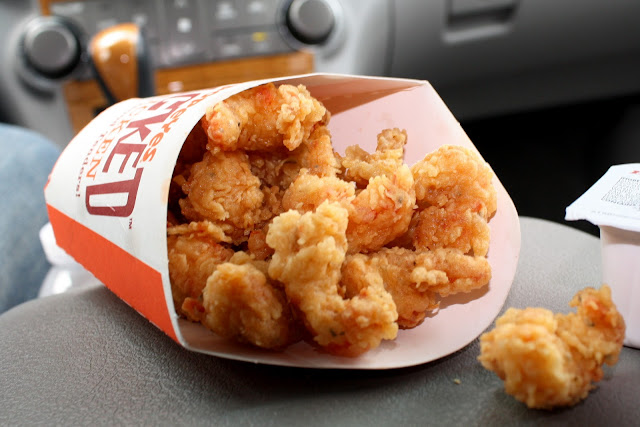 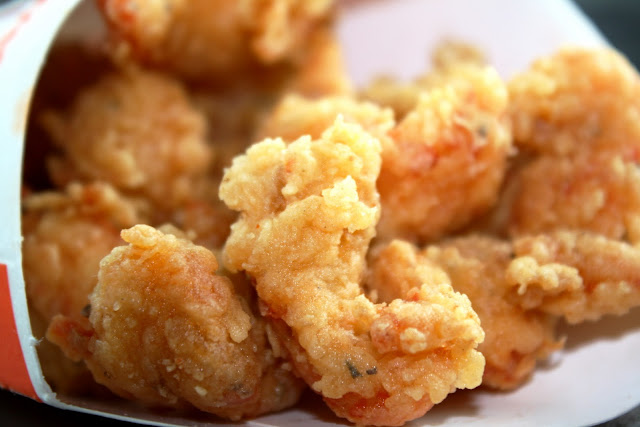 Considering the traveler was a dollar cheaper than the sandwich, I was impressed with how many crawfish were in it. I don't know as if I really needed to eat them after finishing my sandwich in an impressive - or perhaps just disgusting - amount of time, but I ate them all and still wished there were more. 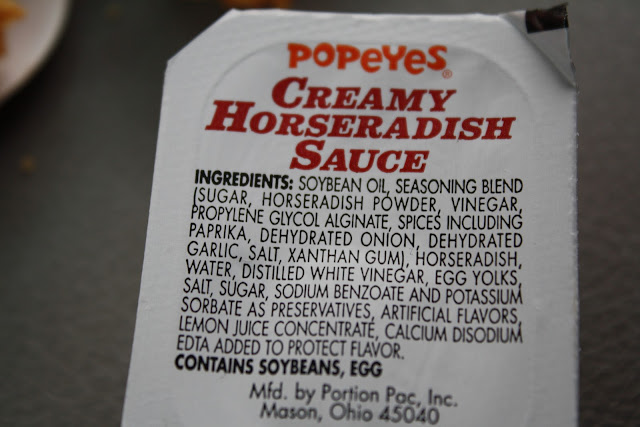 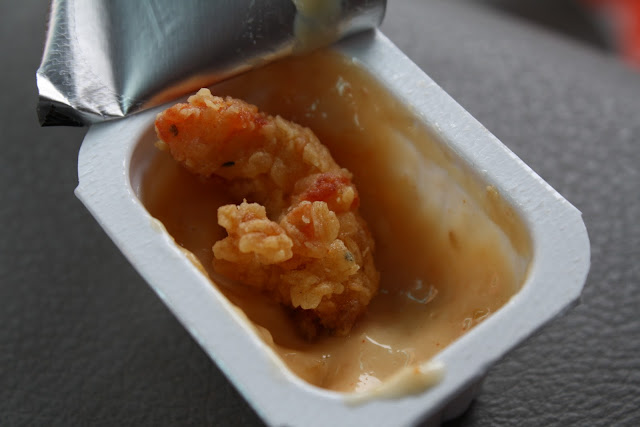 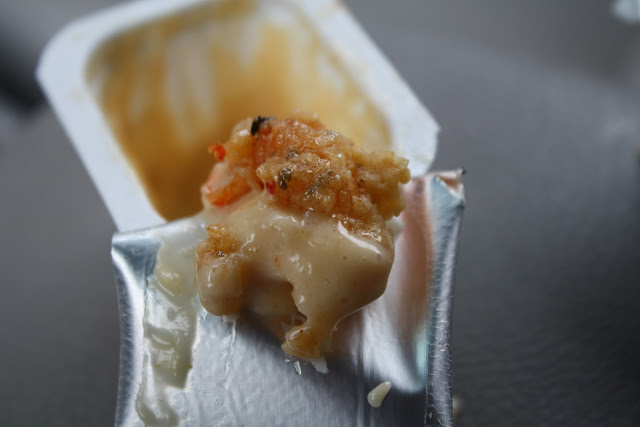 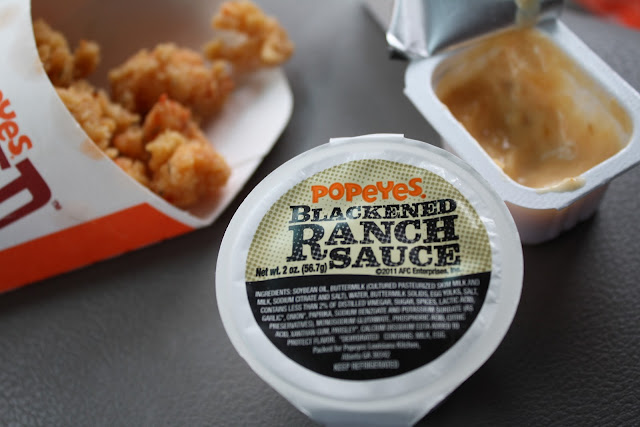 This Popeyes also had the blackened ranch sauce from the Dip'n Chick'n promotion. I thought that every Popeyes around had run out of it, but they had a lot. So I bought two of them. Sure enough, it went very well with the seafood, too.

I don't know how hard it would be for Popeyes to sell this sandwich year-round, but I'm guessing they have their reasons. Because if they could offer it all the time, I imagine they would be much more popular than they already are. I guess I have to make sure I get my fill of crawfish this year before they disappear. The promotion is supposed to be around until November 27th, but lately it seems like Popeyes has been running out of their promotional items before the promotion expires. Hopefully not with this one...
Posted by JustinM at 10:00 AM

The crawfish that Popeyes is serving is frozen Chinese crawfish. Louisiana crawfish is in season from late spring to early summer. Do yourself a favor and try and get some fresh Louisiana crawfish in season (unless you want to spend beaucoup bucks, you'll have to settle for packaged tail meat). You will be amazed how good a crawfish quesadilla is.

A little off topic, but I can't believe that people are still afraid to eat gulf seafood. Since the Spoil (that's what we call that MFn BP thingy), gulf seafood has been relentlessly tested. Less than 1% of imported seafood is screened. I can't begin to convey how deplorable the conditions can get in Chinese aquaculture (um... that water is brown for a reason). I don't want to eat crawfish or tilapia that was raised in a sewer. Not to mention the Chinese are dumping crawfish (and shrimp) into this country at an artificially low price and that practice really squeezes the local fishermen.

That looks fantastic! Was hoping you'd write about them again this year.

Your pics get better every year!

PP- u should do training for popeye's

If you ever make it to Las Vegas, venture five minutes off the strip to Hot 'n Juicy Crawfish. If you can get over the fact they serve them whole, you won't regret it. Amazing.

In today's NYT, the CEO seems busy with a number of things, not withstanding the QC of his restaurants: http://www.nytimes.com/2011/10/25/business/popeyes-executive-ailing-on-a-plane-finds-little-sympathy.html?_r=1

Brad: Thanks for the info. I've purchased bags of crawfish tails before, but I think they were from China, too.

Michelle: I'll do it again next year, too.

Anon: Thanks. It's the third camera in the last two years. But there won't be a new one next year.

Anon: I'd do it for free food.

Stephen: My favorite part: "But they did want some Popeyes coupons, which can make getting through security a breeze."