Getting Closer to the Perfect Burger 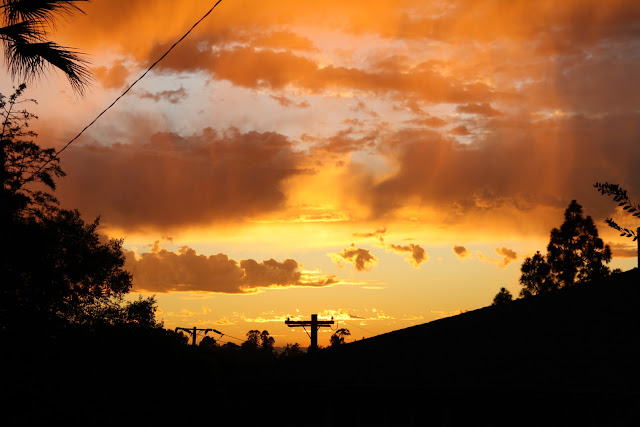 A week ago my friend Tyler asked me for some advice: he was being challenged to a burger-making contest and he wanted to run a few questions by me. He already mostly knew what he was doing, I just gave him some tips. (By the way, he won.) So that got me thinking about making a burger, trying once again to get closer to making my ideal version. Then, when I wrote about the Carl's Jr. Steakhouse Burger, the first comment was from a reader suggesting it was time for me to make another burger. I promised I would.

Friday evening, the last day of September, the first day of the baseball postseason. The above picture was the view out of my kitchen window. What better time to work on making my perfect burger? 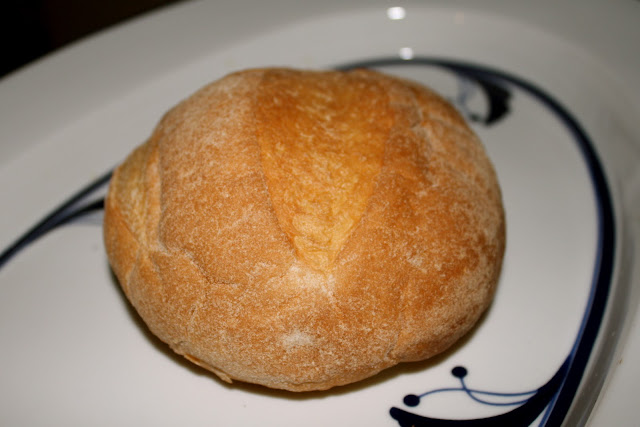 The telera roll. I think I have found my favorite roll for a burger, from SoCal Bakeries. 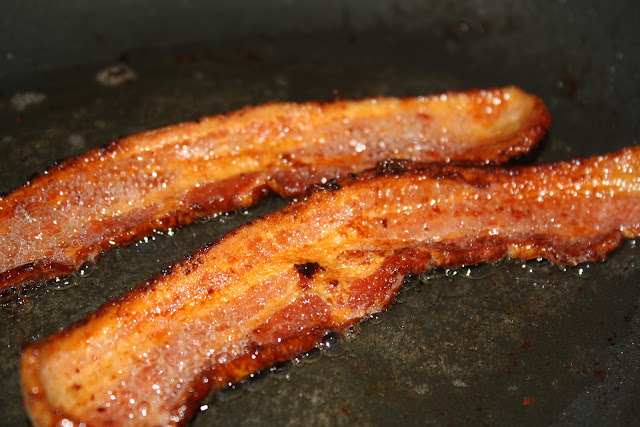 I cooked two pieces of bacon over a relatively low heat, making sure they did not burn at all. When they were a dark-golden brown, I removed them. 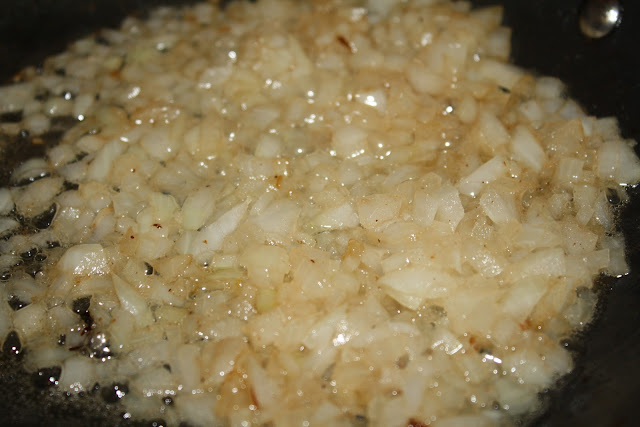 The nice thing about cooking the bacon slowly in a pan is that your are left with a pan of bacon grease. I diced up half an onion and sauteed the pieces in the grease until they were soft. 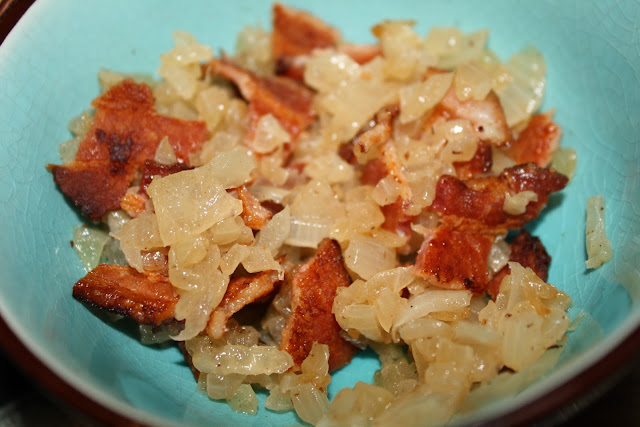 Then I crumbled up the pieces of bacon and mixed them in with the onion. 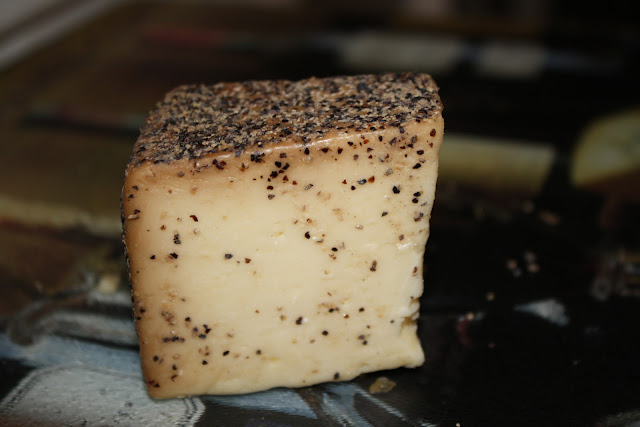 The cheese I selected for this burger was Trader Joe's Toscano with cracked black pepper. 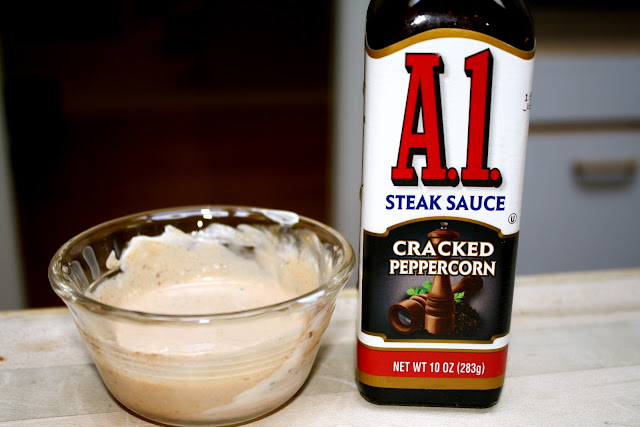 A couple of years ago at Firefly Bistro, I had a burger with "A.1. aioli." I'd never thought of creating something like that, but it was fantastic. So, I reasoned, why not try making it with A.1.'s "cracked peppercorn" sauce, which I like even more than the original? 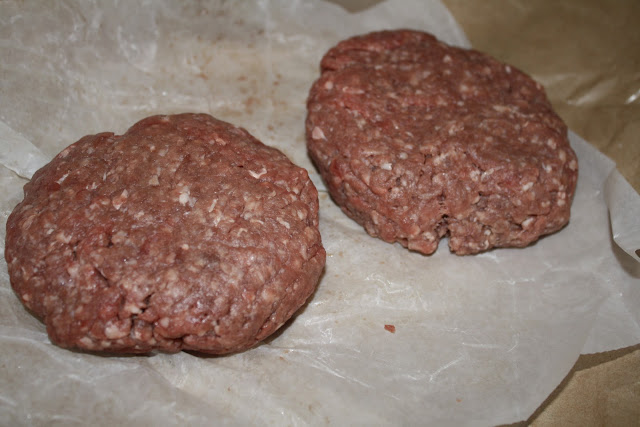 I selected 22% fat ground beef from Bristol Farms, searing the patty in a very hot pan and then finishing it in the oven. 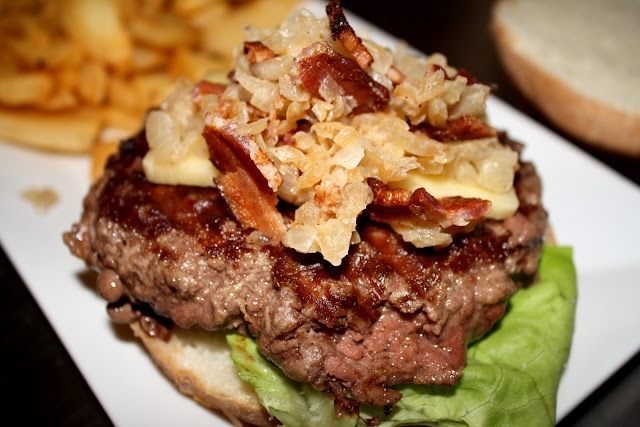 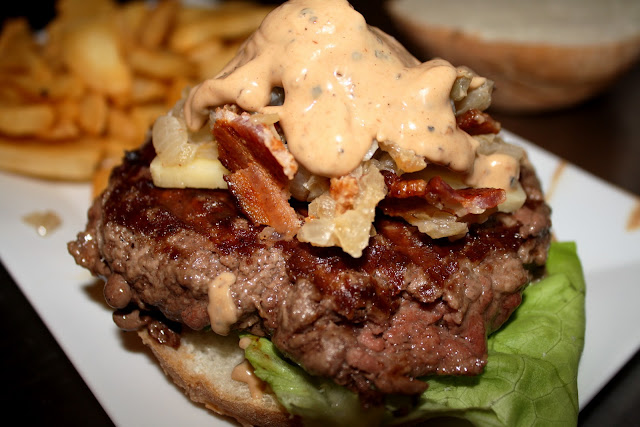 I put a piece of butter lettuce on the bottom bun, then placed the cheese on top, followed by the bacon/onion mix, and finally the A.1. aioli. 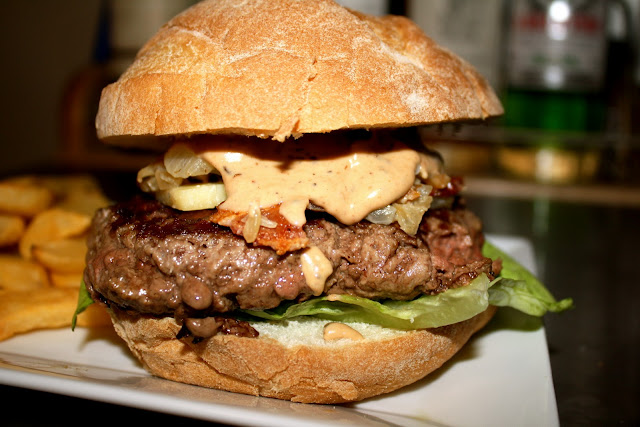 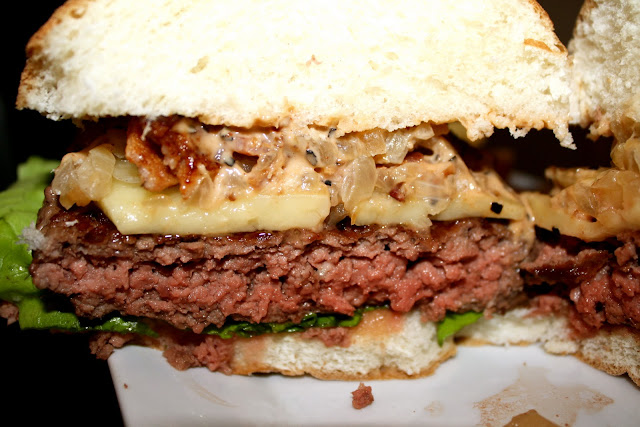 Was it good? Oh hell yes. Was it perfect? Not even close. The two main problems were that the bun, which I'd had for two or three days, was past its peak of freshness. When I inspected it before deciding to use it, I realized it wasn't as good as it had been two days earlier, but didn't think this would matter all that much. It did. And the beef wasn't as good as I'd hoped it would be. (Like many other products at Bristol Farms, the beef quality just isn't what it used to be, even though the prices still are.)

I realize how it sounds to write that the two main problems with this burger were the beef and the bun. That's like saying the two main problems with the UCLA football team are the offense and the defense. Some of the touches I added were great, and I'm definitely on the right track here towards creating my masterpiece. I already have a couple of tweaks in mind. And don't get me wrong, this was still a great burger, the best one I have had in weeks if not months.

But this was not my destination of the perfect burger. It was just another stop on the journey.
Posted by JustinM at 10:10 AM

You forgot coaching. Would not be surprised to see ol Rick and the boys drop one to Washington State this year. Anywho...

What are your thoughts on Potato Rolls for burgers? Here in the mid-atlantic we swear by them.

And what is Toscano cheese? I've never heard of it.

Nothing would surprise me with UCLA. They could go 7-0 or 0-7 and you couldnt get me to bet either way.

I love potato rolls. I often use small ones for mini-burgers. But Telera rolls are just as soft and don't get potato flour all over the place.

The A-1 aioli . . .perhaps you should try A-1 with sour cream instead of mayo.

Beautiful: sunset, onions, open-faced burger (that top bun may be too tall).

You have identified one of these things I need to modify.

too much bread on the top half... and you MUST butter and toast the bun in a frying pan.

No, I definitely do not need to do that.

I love your photos. Sunday was an awesome sunset.