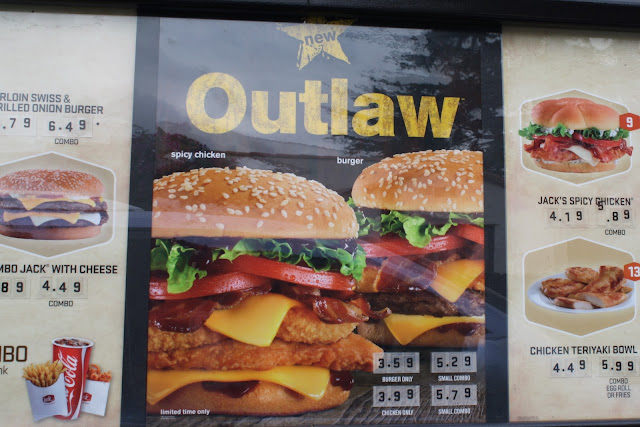 Something about the name bothered me when I first heard that Jack in the Box was planning to release a new product called the "Outlaw Burger," as well as the "Outlaw Spicy Chicken Sandwich." At first I thought that perhaps I just wasn't getting the whole "outlaw" concept. Then I read this in the press release: "Our new Outlaw Burger and Outlaw Spicy Chicken Sandwich feature a mouthwatering combination of bold flavors reminiscent of an old-fashioned barbecue."

Well, okay. It doesn't make complete sense, but I can kind of see what they're going for.

(Did you ever see the movie Wonder Boys? It's one of my ten favorite movies. There is a scene when a pretentious writer, played by Rip Torn, is giving a speech and asks: "What is the bridge from the water's edge of inspiration to the far shore of accomplishment?" The character played by Tobey Maguire cannot help but laugh at the utter ridiculousness of such a question and let's out a loud, involuntary laugh. I had the exact same reaction when I came across a gem of a line in the press release that claims the Outlaw sandwiches' tastes are "Inspired by the kind of bold flavors that emanated from chuck wagons and open prairie campfires.")

But then, thanks to Marvo at The Impulsive Buy, I realized what the issue was: these aren't new. They came out five years ago. I didn't blog back then so I didn't have any strong desire to try them, but I do remember thinking they looked all right. Yesterday I decided to give the chicken sandwich a try. 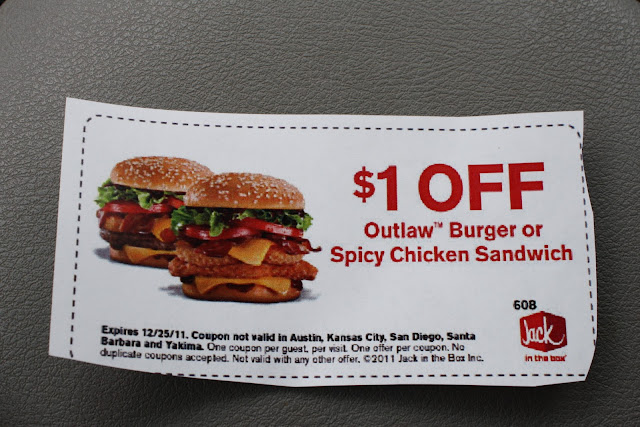 Plus I had a $1 off coupon. (Check out the fine print. If you asked one million people to guess the five cities in which the sandwich would not be sold, how many would get the right combination? I say none.)

I ordered the chicken sandwich and nothing else; the total with tax was $3.25. 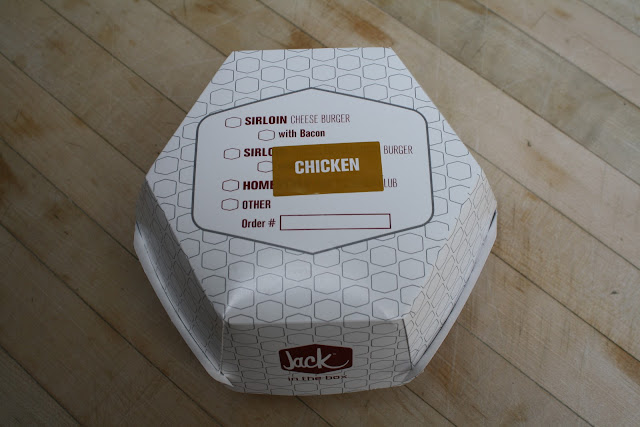 The sandwich came in the same hexagon box that most of their large sandwiches come in. I'm not sure which is more wasteful: this or the little sleeve that the Wendy's burger came in yesterday. This seems to waste more material, but then again it also serves a purpose, which the Wendy's sleeve did not. 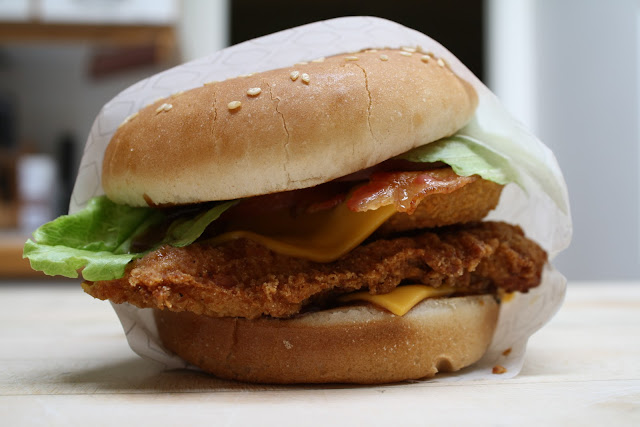 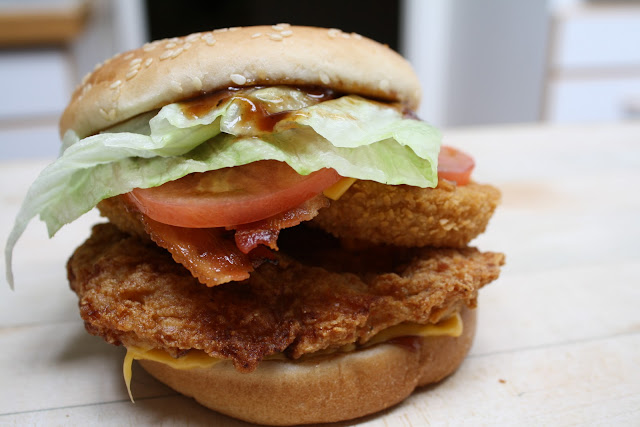 As you may be able to tell, it's the Jack's Spicy Chicken with a bunch of other stuff piled on top: onion rings, bacon, lettuce, American cheese, and a "Bourbon BBQ sauce." 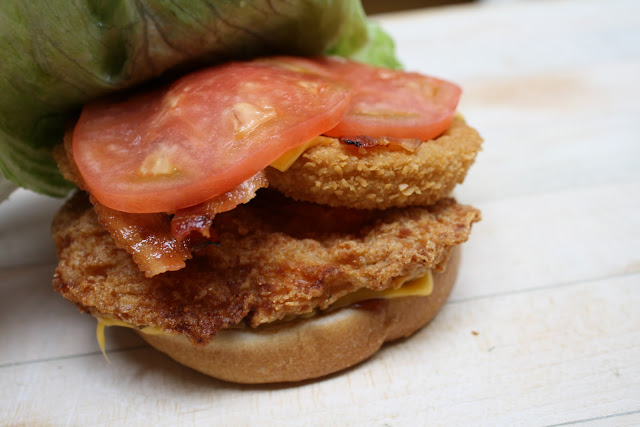 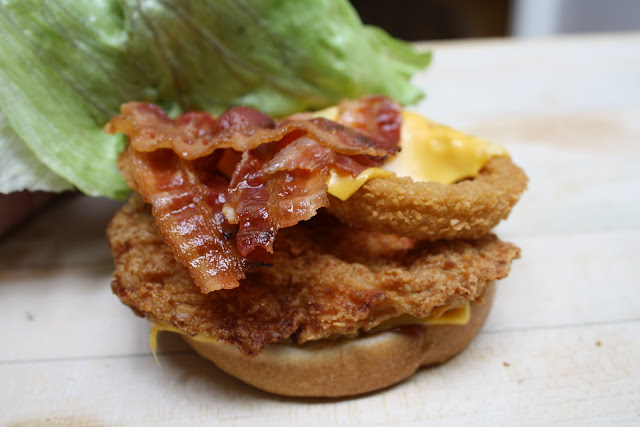 I took off the tomatoes and expected to take off at least some of the bacon (most likely all of it)... and was shocked at how good it looked. No, this will never be confused with the thick slices of Amish bacon that I cooked for the burger I made Monday. But by fast-food-bacon standards, this was very good looking. 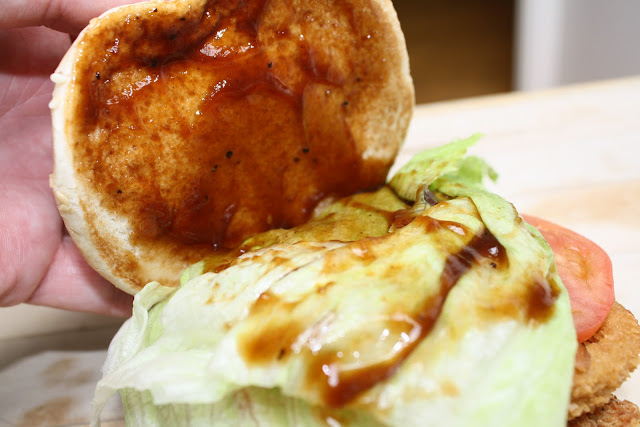 There was a fair amount of sauce slathered on the sandwich, but I enjoy Jack in the Box's barbecue sauce, and this was the same tasty sauce that appeared half a year ago on the Bourbon BBQ steak sandwich. 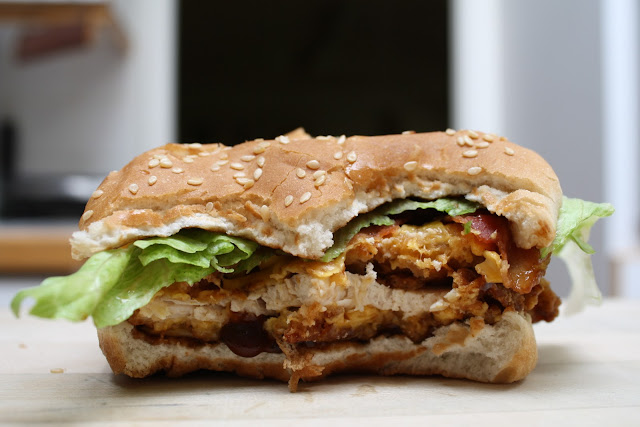 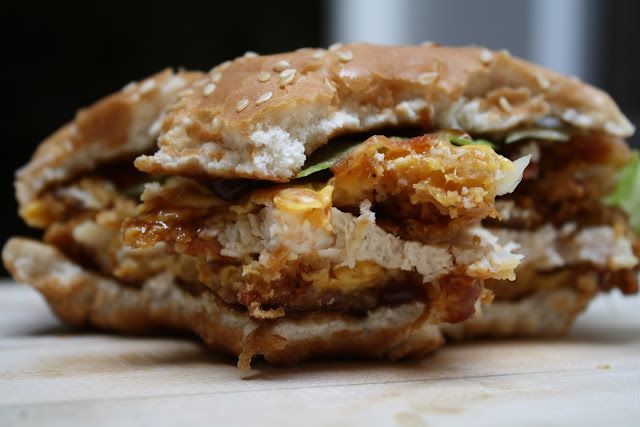 There are no surprises here: if you like Jack's Spicy Chicken - and I most certainly do - and the additional toppings don't sound bad, you're going to like this sandwich. The chicken was spicy, the sauce was tasty, and the onion rings were decent, if nothing special. The bacon was as good as it looked. The American cheese added nothing to the sandwich and I think it would actually taste better sans cheese.

Will I be getting one again? Probably not. There are too few meals in life to go back and repeat a fast food sandwich unless I love it. But I would certainly have no problem eating this again. I have always liked Jack's Spicy Chicken, and the addition of onion rings, a Bourbon BBQ sauce, and well-cooked bacon were all pleasant.

Jack in the Box is food of the GODS. I miss those tacos, potato wedges and oreo shakes so much.

Fritos: Those are my three least favorite things at Jack!

Nosh: Unfortunately, as happens with almost all fast food sandwiches, the bun sucked.

When I was a teenager, the whole Jack's vs. Wendy's spicy chicken sandwich argument was just as passionate as Dodgers vs. Angels. And, as happened with baseball, I was in the minority in preferring the Jack's sandwich, which I still do.

the actual sandwich looks like the actual picture at least! good work here, due diligence.

This sandwich is seriously one of the best sandwiches I have had at Jack in the box, or any fast-food restaurant. So good! Way better than the hamburger version. Pick one up today!

I haven't been to a Jack in the Box branch, but I've to say, the outlaw burger sure looks delicious. Bacon, cheese and chicken make for a very tasty combination! =)

I've had several of these, they are quite good! I certainly wouldn't complain if this was made a permanent menu item. Best bang for the buck in fast food, I think. It's surprisingly much cheaper than lesser sandwiches like the sirloin and swiss.

BTW I take the tomato off my sandwiches as well. High five! :p

Have you had the burger version or only the chicken? I really dislike JitB's meat so I've never tried the Outlaw burger.