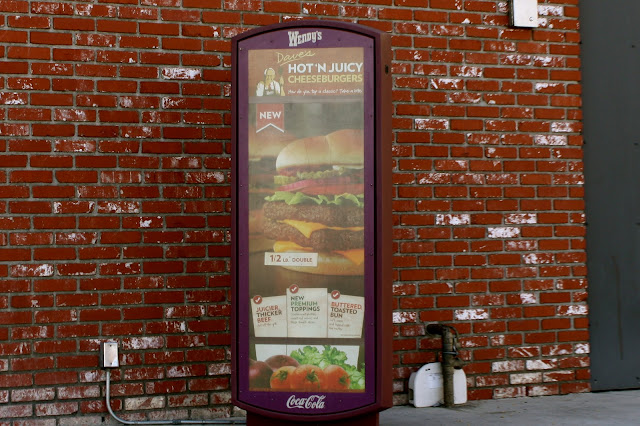 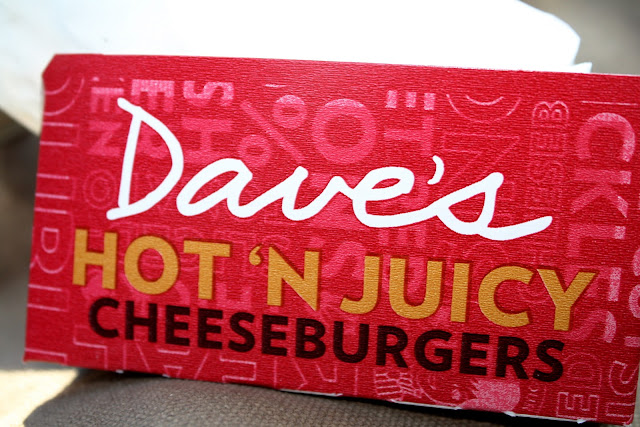 I first heard rumor of Wendy's upcoming, improved, "premium" burger line back in November of last year. In the ephemeral world of fast food promotions, an eleven-month advance notice is a lifetime, comparable perhaps to the 15-year wait for Guns N' Roses' Chinese Democracy, or however many years we're going to end up waiting to see Manny Pacquiao and Floyd Mayweather fight.

Although the official release date wasn't until October 3rd, pictures of the new burgers have been ubiquitous on the web. Apparently every Wendy's in America, other than the one by me, started selling them early. Hell, Wendy's website started featuring the new burgers weeks ago. Twice I went to my local Wendy's and was told "Nope, not ready yet."

So yesterday, while I was trying to decide what to do for lunch, I remembered that it was the 3rd of October. I put East Autumn Grin in the CD player (if you know why, you are a musical kindred spirit) and headed down to Wendy's, halfway expecting that they still weren't going to have these burgers.

But they did, and they offered them in several variations: one, two or three patties, all available with or without bacon. I ordered a single patty, no bacon, for $3.49. And when she asked me if I wanted cheese on the thing - I wasn't expecting that - I instinctively said no. (Although I love cheese on burgers, I don't usually enjoy the cheese that restaurants use, and almost never the cheese that fast food places use.) Only after did I realize the folly in writing about something called a Hot N' Juicy Cheeseburger and omitting the cheese. Whatever. It's a free blog. 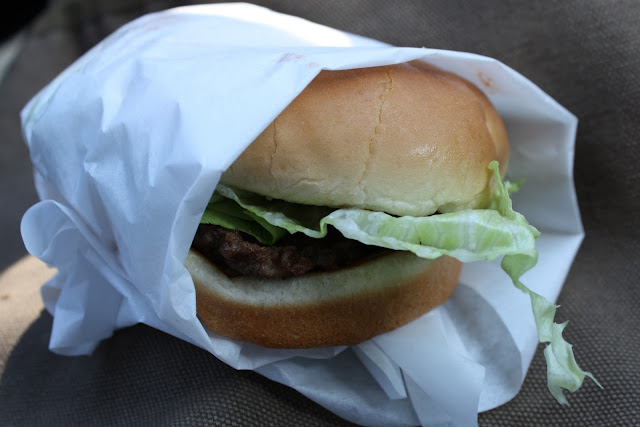 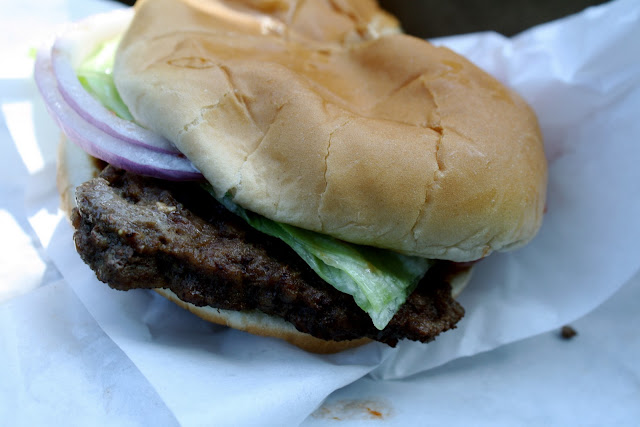 The burger was wrapped in paper and stuffed into the cardboard sleeve you see in the second picture at the top of the page. While the paper is a cute (if completely unnecessary) touch, I cannot understand the point of the cardboard. I guess someone at Wendy's thought it looked better that way. 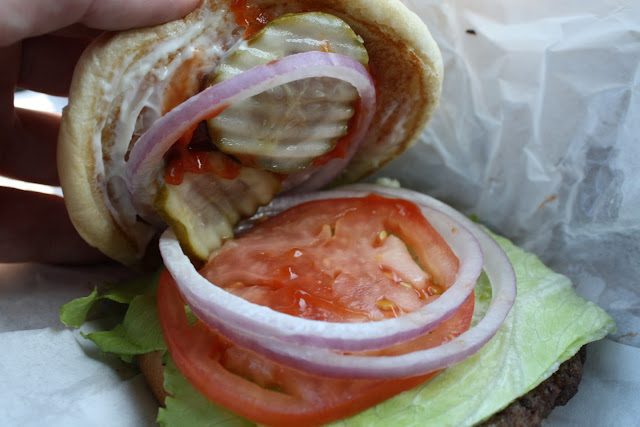 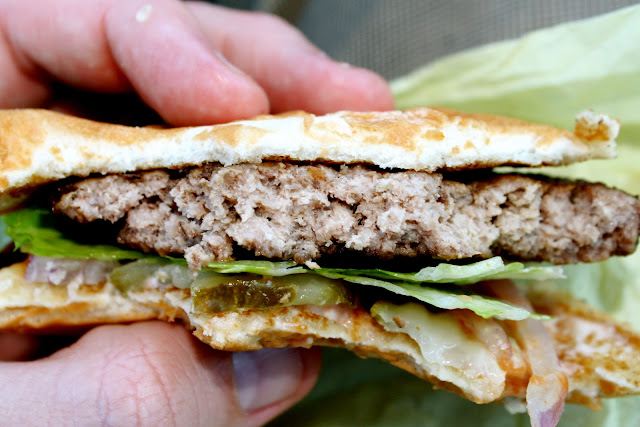 The bun was nice and soft, but the two things that Wendy's claims the bun to be - "buttered and toasted" - are not true. The pickles and red onions were a nice touch, definitely above-average quality for a fast food burger. But the patty? I mean... yes, it was thicker than Wendy's burgers used to be. But putting the word "juicy" in the title almost leaves room for legal action. If this thing had been any more dry it would have been jerky. The dryness was somewhat offset by the deluge of ketchup and mayo, but that's not really a good thing.

It was too difficult to finish the burger. Maybe if I had purchased a drink I could have choked it down, but it just wasn't pleasant.

So it's hard for me to accurately give an opinion on Dave's Hot 'N Juicy CheeseHamburgers. I thought this one I had was lousy... but this can't be what they're all like, can it? This can't be what the chain had in mind when creating a burger to compete with the Five Guys and In-N-Outs of the fast food world. Because this is not something that I will ever order again and I don't see any reason why someone with access to those two beloved chains should ever purchase one of these Wendy's burgers.

I suppose, after waiting almost a year for these new Wendy's burgers, there was no way they would live up to expectations. But I had no idea just how disappointing they truly would be.
Posted by JustinM at 11:01 AM

Yay for the Matt Ryan reference and the review. Wendy's was always my favorite drive through burger. That was until I tried one of the new burgers. TWICE. I would call it worse than lousy if I could think of a good adjective. Except the removal of mustard, everything they did sounds like it would make the burger better. I am glad to know someone out there has the same feeling about it.

I tried it too and thought it was awful.

Truth me told, a regular Carl's Jr. Big Hamburger has always hit the spot for me, although a western chain called Arctic Circle does outstanding Black Angus burgers.

CEN: You have more patience than I. I will not be trying this a second time. And great to know there's another Matthew Ryan fan out there.

Michelle: Okay, maybe I'm wrong, maybe they can all be that bad.

Adam: That's a difficult question because I don't really think any of them are good. If Del Taco counts - I know it's not a national chain - I will answer that. If not, I will say the McDonald's McDouble. I like the bun and the onions.

If you had asked me five years ago I would have answered Wendy's without hesitation. But lately I really seem to dislike their beef.

But really the only time I ever eat a burger from one of those national chains is when I'm going to write about it. There are quite a few burgers stands in my town that are really good and no more expensive than fast food chains. And there is both an In-N-Out and a Fatburger within two miles of me.

Maybe the cardboard thingy doubles as a barf bag.
Wendy's is gross.

ive had a few of these. i thought they were fabulous.

The bun looks kinda toasted though, maybe that's just me.

Nosh: Lately they have been, and that's a shame. Dave Thomas was legendary for visiting locations and showing them how to make things properly. I doubt he would like what is happening to Wendy's.

Anon: Good to hear. Hopefully yours were cooked better than mine.

Charlotte: I suppose it kind of does, with the way it is crumbling. But, as I wrote, it was not.

Did you visit the Alhambra Wendy's?

I find that location to be a bit hit or miss.

The Monrovia location seems to be more consistent.

This location was the Alhambra one on Atlantic; I visit that one and the Monrovia location on occasion and I agree with you completely.

But I also find they are both equally filthy inside.

What is this "CD Player" thing you speak of? :)

Even when I was typing it, I realized how anachronistic it sounded. But I never got on the mp3 player train. I own one (actually two) that I was given as a gift, but I still use CDs.

A little late on this - but next time you find yourself check out the Garlic Steakhouse burger. I really, really enjoyed it.

Find yourself at Wendy's, that is.

I would love to try it - I went to three different Wendy's around here; none had it. Where did you get it?

I was on the way to Vegas over the weekend and they had them at a Wendy's on the way there. Just saw they are testing them out at some locations. Best fast food burger I've had in a while.