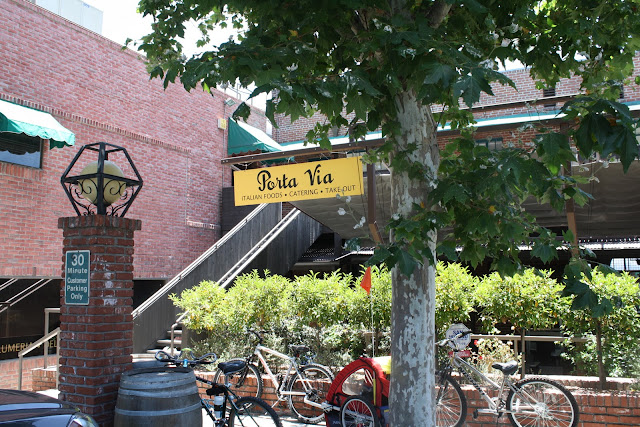 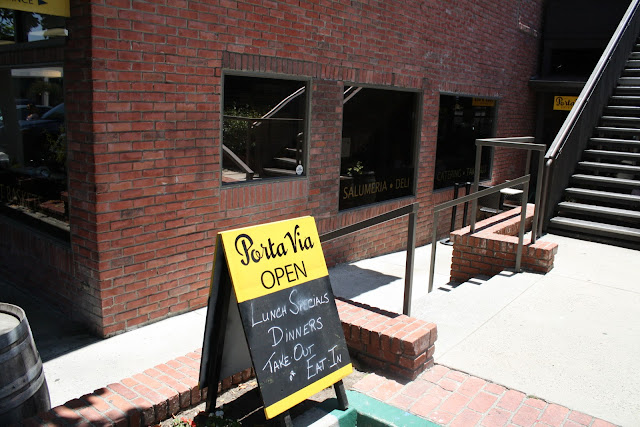 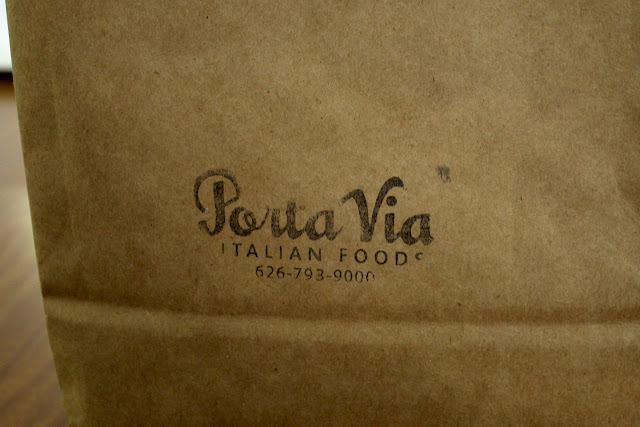 There are some places that I just don't think about as much as I should. Sometimes months go by without me visiting; sometimes years. And then I return and I say "Why don't I come here more often?" There may not be a place in Pasadena at which that happens more than Porta Via. It's been open just over four years, and I've probably been there twenty-five times... but fifteen of those trips were in the first four months that it was open. Tracie and I stopped by several times for a cup of coffee, and more than once in that fall of '07 I picked up red-wine-marinated tri-tip and meatballs to take over to watch UCLA football games with my parents.

But I just don't make it back much these days. And I have no good reason why.

I've written of the place four times: In December of 2008 when I had take-and-bake pizza; in September of 2009 when I took Elizabeth's sisters there for lunch; in November of 2009 when Elizabeth had a pancetta BLT ("The best BLT I have ever had") and I had meatballs; and this past June, when I had an amazing turkey dip.

Yesterday I was picking up lunch for my mom and myself and I suggested sandwiches. It just so happened that I was only two blocks from Porta Via, so I decided to head there. It was noon - and it was packed. (But, I'm happy to report, their system of taking and filling orders is much improved from those early days, when a good-sized crowd meant throwing a couple elbows at those who were attempting to cut in front of you.) In less than five minutes I was able to place my order: a rosemary ham panini and a Kobe roast beef sandwich.

I stood off to the side for perhaps ten minutes - probably a little longer, actually - before I received my to-go bag. In the five minutes it took me to drive to my mom's work, my car was perfumed with an amazing aroma of rosemary ham and roasted peppers. That was the sandwich I got for my mom, but I won't lie: I considered taking it and telling her I bought her the roast beef sandwich instead. 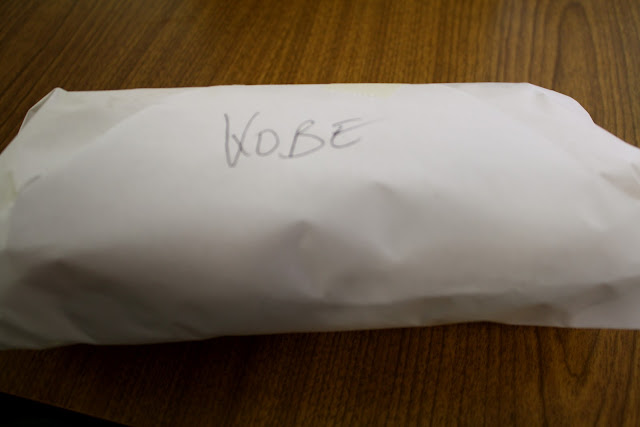 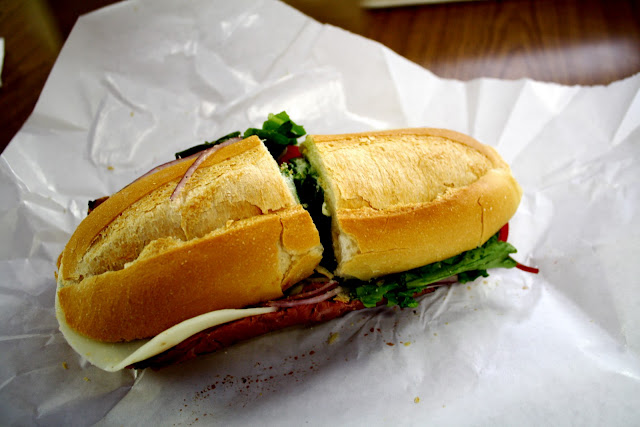 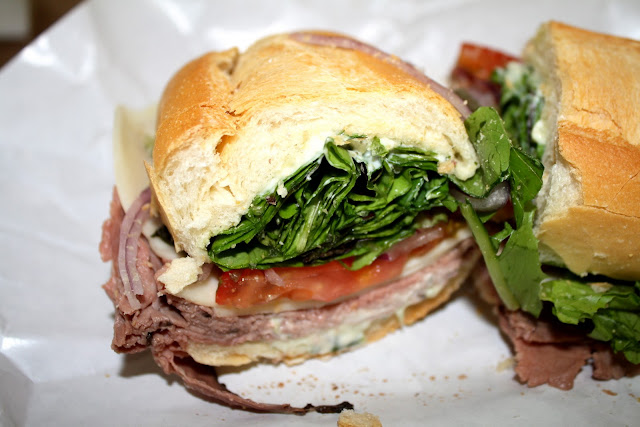 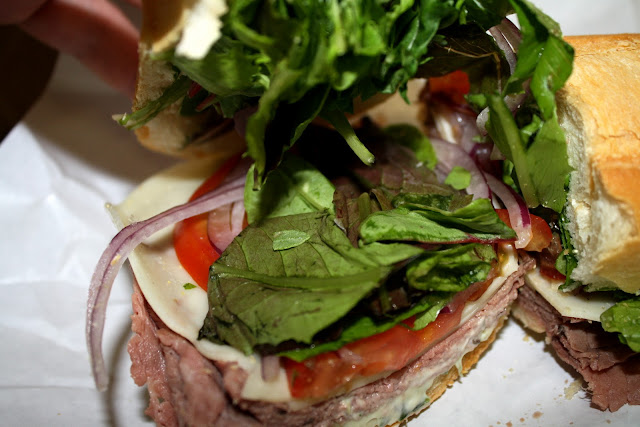 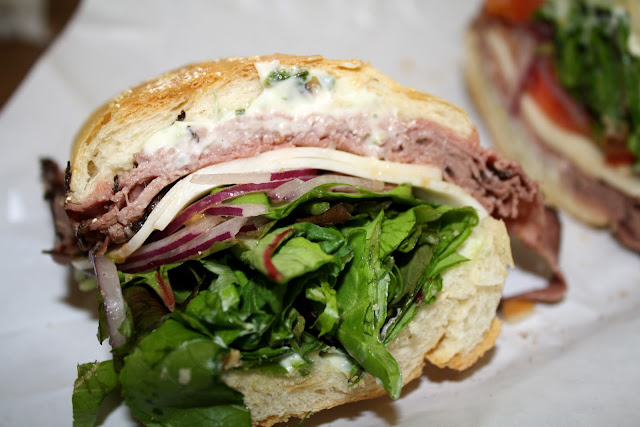 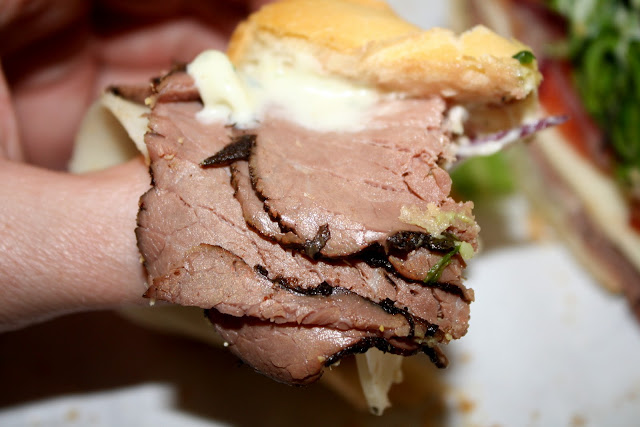 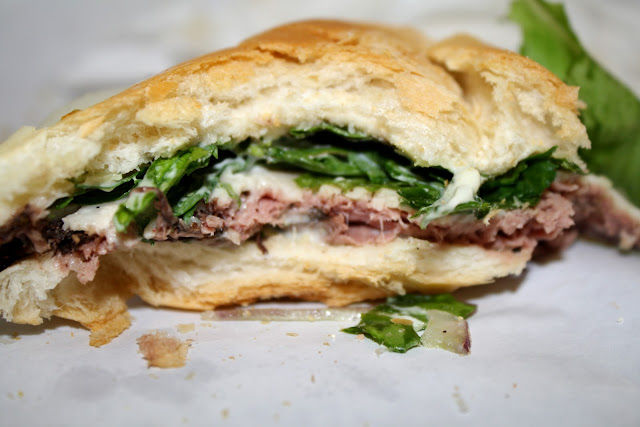 But I'm glad I didn't lie, because my sandwich was fantastic. I'm no expert on roast beef sandwiches - if you don't count Arby's, it's been more years than I can remember since I've ordered one - but I feel comfortable calling this one the best I have ever had. I allowed my mom to take a bite with the tomato still in the sandwich - "It's better that way," she proclaimed - but I removed it right after.

The bread was crusty on the outside and soft inside. It could have been softer, but that's a minor quibble. The Kobe roast beef was melt-on-the-tongue soft, the red onions were a nice, crunchy touch, and the pesto aioli tied it all together. At $8.95, this was only one dollar more than a similar sandwich I had earlier in the week from a more famous place, and this was much better. 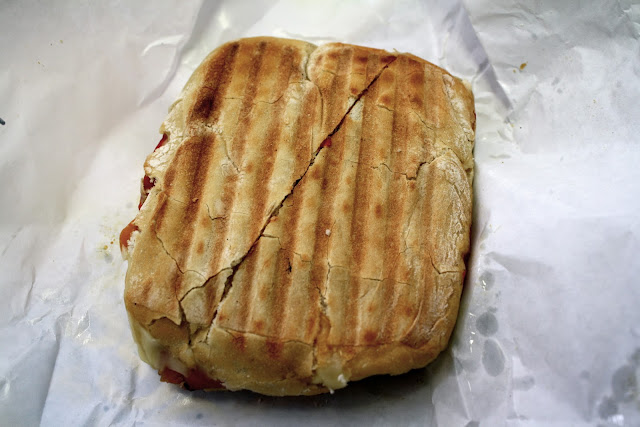 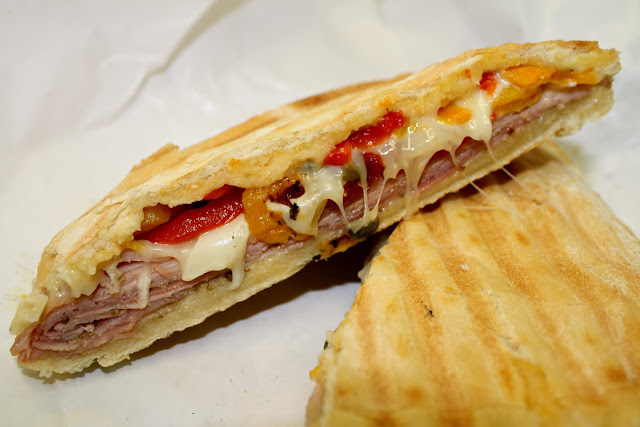 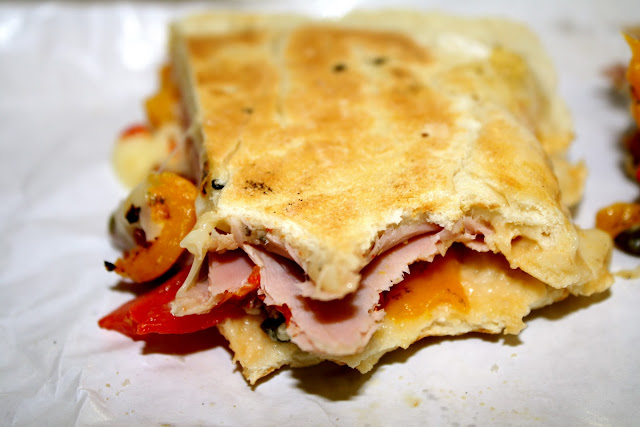 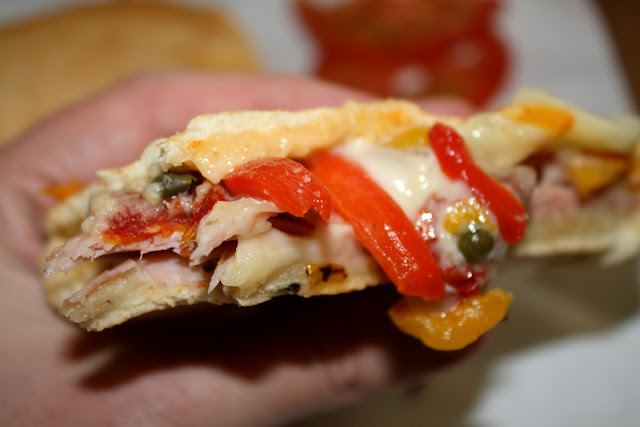 My mom had to answer a phone call, so I helped myself to one (well, maybe two) bites of her sandwich. It was every bit as good as it smelled. The gooey Fontina cheese, the roasted peppers, and yes, even the oven-roasted tomatoes, were an incredible combination. The ham was noticeable, mostly for the rosemary flavor in each bite, but other than that it was not the dominant flavor. (There was also honey mustard in the sandwich, but I did not taste one bit of it - not that I care. I like honey mustard... but not as much as I like roasted peppers and cheese.)

The next time I'm helping my mom with something and it's lunch time, I will make sure I suggest Porta Via. I have to get back to going there more than once or twice per year.


UPDATE
My mom sent me an email this morning that she had read my blog and the sandwiches looked so good that she wanted more. I said okay. I didn't have my camera with me so I used my phone camera, which is why the pics aren't very good. 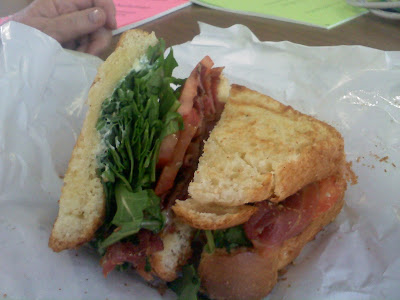 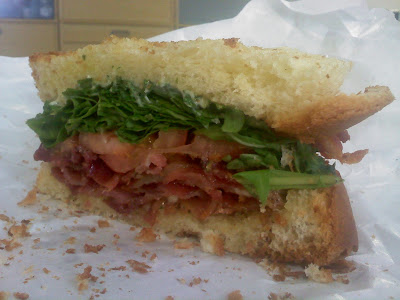 I thought for sure my mom would get the panini again, but she asked for the Italian BLT - featuring pancetta. She loved it, especially the bread. "The only thing that would make this better would be if it had avocado on it," she said. I almost threw up. 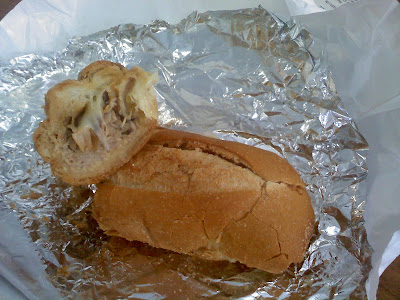 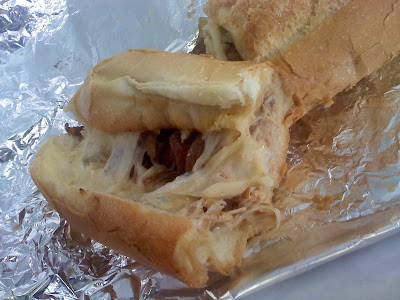 I went for the turkey dip - a bit of a misnomer since there is nothing into which you dip it. The juice is all on the inside, with caramelized onions, cheese and turkey.

We both loved our sandwiches... but I think we liked yesterday's lunch more.

Oh man. Me want those.

I must go there for their Italian sub sandwich; I had left them off the list in my quest to find the best.
Did you ever try the BLT at The Stuffed Sandwich? I know you've been there - theirs is the best I've had. Not as fancy as P.V., but all killer, no filler!

I haven't been there in ten years! I think I should go again soon.

PSC makes a pretty good Roast Beef sandwich. Its called The Big B.

That's another place I don't make it as much as I should. But I don't like the layout there as much as I do Porta Via.

I want a turkey dip or roast beef sandwich now!