I stopped by Zankou Chicken for a late lunch on Friday and got my usual order: a chicken tarna wrap (no tomatoes) and an 8 oz container of garlic sauce. While waiting for my food - the place was packed as usual - I chatted with a guy about the garlic sauce after he had admired my buying an entire container.

"Hey," I said, "I could eat this stuff on anything."
"Anything?" he replied.
"Well," I backtracked, "maybe not anything."
But a few minutes later as I sat in my car eating my wrap, I thought to myself: wait, maybe I can eat this on anything. So I decided to try over the weekend.
Friday night I picked up some McDonald's; I ordered a chipotle chicken snack wrap and some McNuggets. The Zankou sauce was great in the wrap. The spiciness of the barbecue sauce and the smooth, explosive garlic flavor of the paste were an extreme and yet still delicious combination.
I spread some garlic sauce on a McNugget. It was okay, but not great. The sauce goes better with the Zankou rotisserie chicken than the fried McDonald's kind. But then I put some garlic sauce on a McNugget and topped it with hot mustard. The conflation of the two sauces made this the best McNugget I have ever eaten. 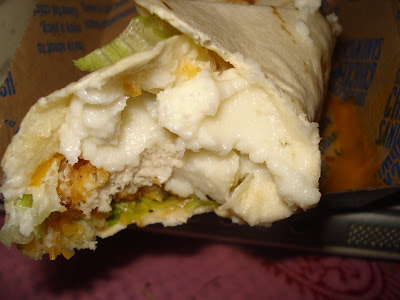 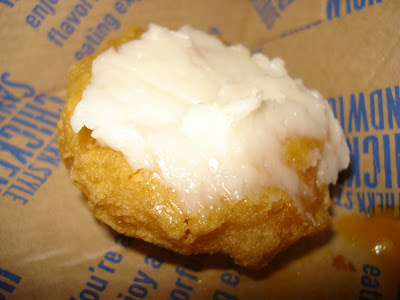 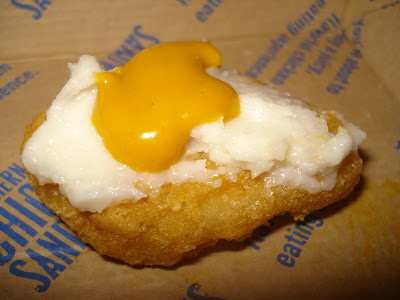 The next morning, while watching College Game Day, I ate some leftover McNuggets for breakfast. I ate one of them with the hot mustard and garlic sauce combo. Still good. But then I put together a McNugget with garlic sauce and some chopped peppers and pickled turnips from Zankou. It was outstanding.

"You're a freaking genius," Elizabeth said. (Actually she said I was a complete moron, but I'm pretty sure she meant genius.) 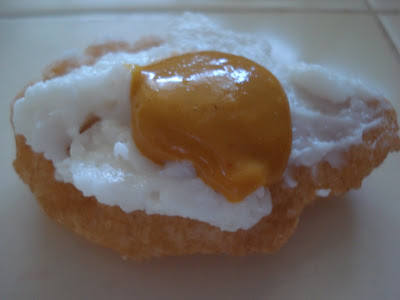 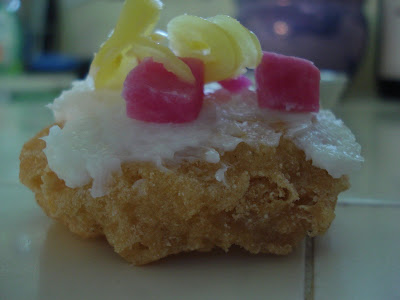 Saturday afternoon I went to the Rose Bowl for the UCLA-UW game. I had two hot dogs and two beers, and the whole time I was wishing I had brought some garlic sauce with me for the dogs. Oh well, next time.

That evening I was telling a friend about the experiment. "You should go by Burger King," he said. "You hate that place. See if the sauce makes it better."

This was one of the best ideas I had heard in years. I would try food from one of my least favorite places, mix it with one of my favorite things, and see how it turned out. I ordered the Steakhouse XT burger and some chicken fries, which are perhaps my least favorite fast food item ever.
The Zankou sauce helped the burger a lot. The patty still had the typical (lousy) Burger King taste, but the peppery sauce went very nicely with the garlic sauce. The chicken fries were also much better (although they still weren't anything special.) 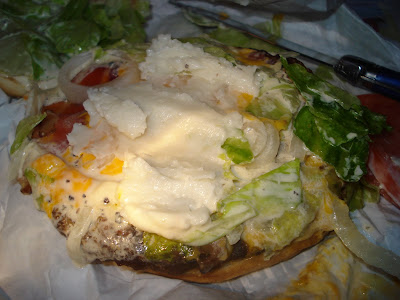 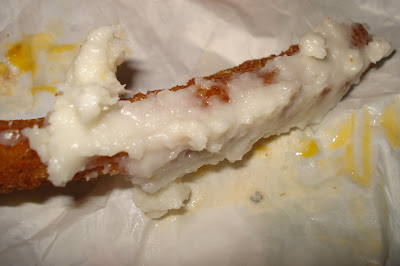 For dinner last night, we cooked some snacks in the oven, but I also microwaved a White Castle hamburger. I added some hot pepper rings to it and a very healthy amount of garlic sauce. It was messy, very pungent, and very, very delicious. If White Castle and Zankou Chicken ever join forces, they could become more powerful than Google. 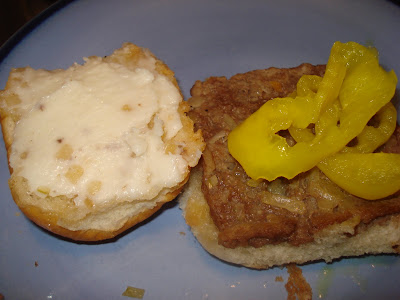 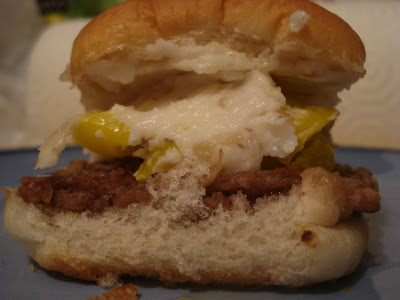 That settles it, I thought to myself. I could eat Zankou garlic sauce on anything. But then I had a thought - an idea about a food that I have loved my whole life. Garlic sauce couldn't possibly be good on it... could it? 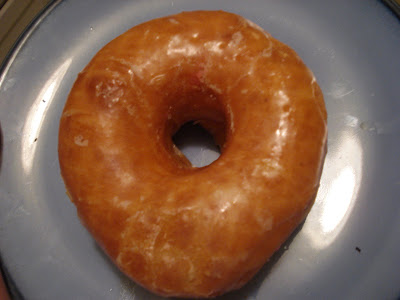 A glazed donut. I don't know how many of them I have eaten in my life, but it's not a small number. I have never put anything on one - never even considered it, actually. But there I was standing in my kitchen, a knife covered with garlic sauce hovering over a perfectly good donut, wondering if maybe I was taking the whole thing too far. 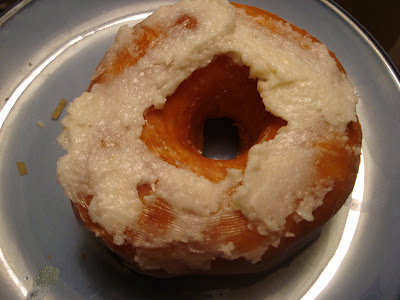 Well, whatever. I spread the sauce on and took a bite. This next sentence may well be the most predictable one that will ever appear on this blog. It was horrendous. Absolutely disgusting. One of the worst things I have ever eaten.
-
"This is awesome," I said to Elizabeth. "You should definitely try it."
-
"Absolutely not," she said. "That looks vomitous." (I'm not sure if "vomitous" is actually a word, but I just spent 20 minutes browsing Thesaurus.com to come up with a better adjective for how this tasted. I could not. It was vomitous.)
-
So, as it turns out, I can't eat Zankou garlic sauce on anything.
Posted by JustinM at 1:41 PM

The last experiment with the garlic sauce was definitely questionable. But at least you didn't think it was delicious and start a trend of putting garlic on perfectly good donuts.

I have a new idea for a food group to try -- go for a month without eating anything fried, greasy, salty, covered with a sauce, or is the color brown. Can you find healthy food?

Have you figured out how to make the sauce? I've been working on that for years.

I too love that stuff, but I do have to make sure nothing is up on my social calendar for a few days afterwards. Sweating garlic is not a good thing.

Years ago my boss was Armenian and I went over to his house one night for dinner. His wife had made a very similar sauce and she gave me the recipe. But I never make it quite as well, even when I add more garlic. It's easier for me to just buy a container for $5 and use it throughout the week on, well, almost anything.