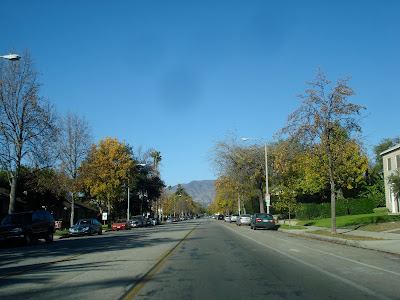 Thanksgiving has always been one of my favorite days of the year. There is no pressure to buy presents and attend lots of parties, like at Christmas time. It's just about football and eating and hanging out with people. This year I went to my friends Jim and Rachel's house. It was a gorgeous day as we drove up Marengo. The idea that it can be 82 degrees on Thanksgiving is still a little foreign to Elizabeth, but I am just fine with it. 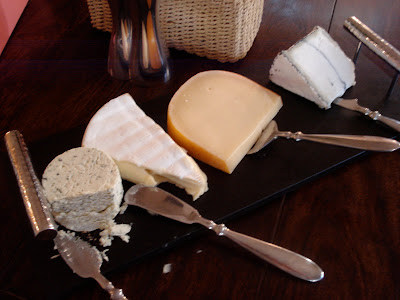 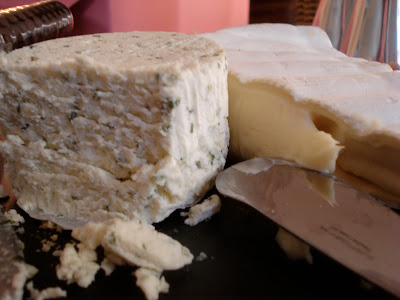 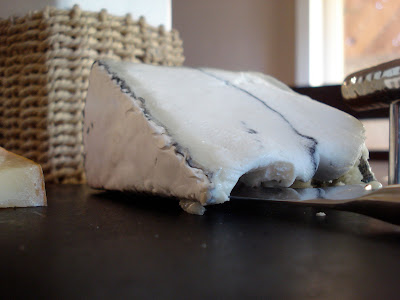 There was a platter of cheese laid out for appetizers. We all love cheese and seem to eat it for any occasion. I was outside for at least a couple hours, though, so I couldn't eat very much of it. (When I fry a turkey I am always pretty safety-conscious. I don't leave the oil unattended once the flame is lit and I never leave the turkey once it's submerged in the oil, which means I miss out on some of the football and a lot of the snacks. Oh well. I suffer for my art.) 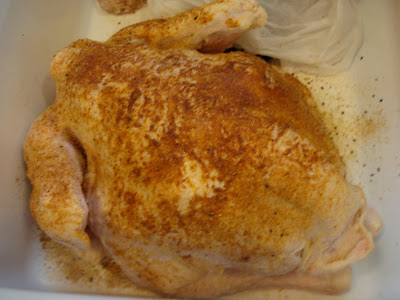 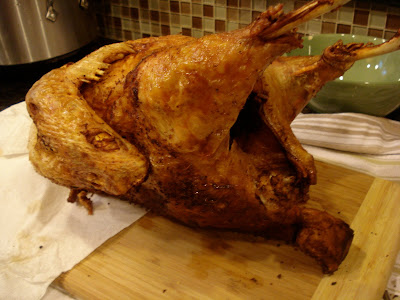 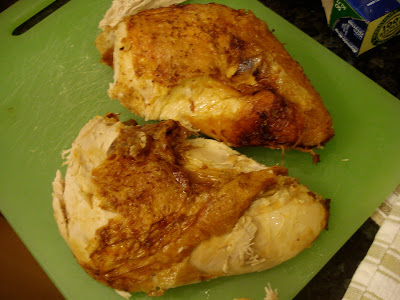 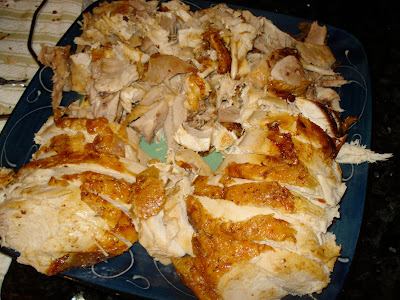 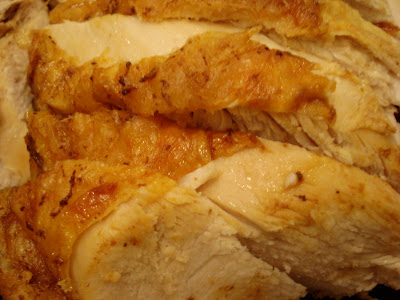 I had purchased a turkey from Trader Joe's the day before Thanksgiving a let it thaw for quite a while, although there were still some pieces of ice in the bird when I started prepping it. I ran water all over the inside and out to thaw it, then put a rub all over the turkey and let it sit while the oil heated up.
There was probably still a little ice left in the turkey somewhere, because it immediately stated spitting oil out of the pot. Not a big deal - I had turned off the flame thinking this might be a possibility - so I just made sure the oil wasn't all over the burner and re-ignited it. But there was a fair amount of oil that had spilled onto the patio, so rather than take pictures of the turkey as it was frying, I did a couple things to help clean up the oil.
After about an hour I took the bird out and let it rest for a while. When I fry a turkey I like to take off the entire breast and chop it into thick pieces so that everyone can get a piece of skin. (I'm not a big fan of the skin, but Elizabeth loves it, so I gave her mine.) I sneaked a few pieces of turkey before plating it all; it was great. 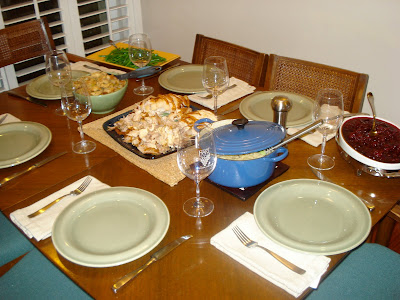 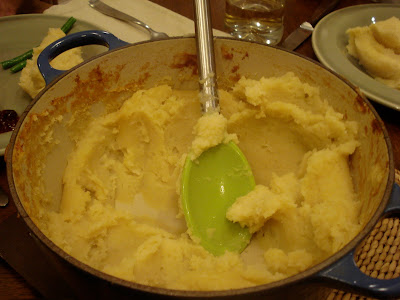 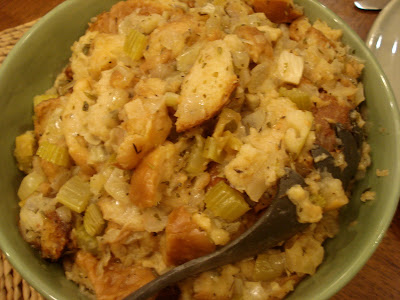 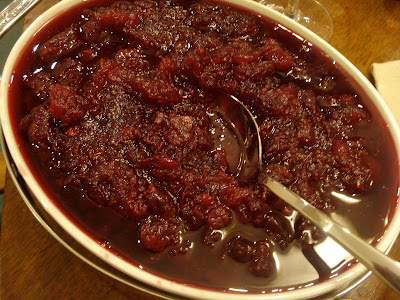 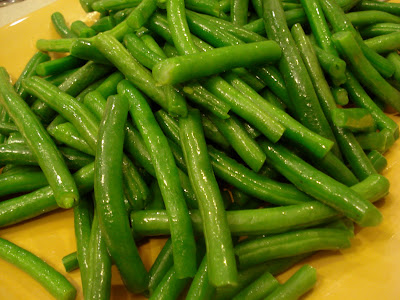 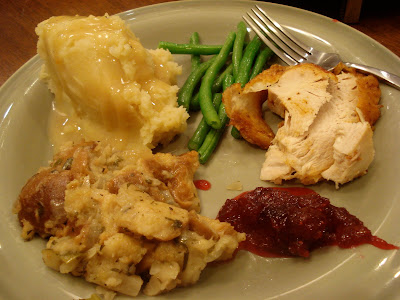 There were 6 of us in total at dinner. Our friend Tracie, who was down in San Diego County, did not join us but made us her famous mashed potatoes. They are about as good as any I have ever had. Rachel was very sick and apologized for the dishes she made, although it certainly wasn't necessary. The stuffing was more moist than usual, but I thought it was great. (Rachel wished she'd added more bread.) The green beans were definitely undercooked, but that's how I like them. I much prefer beans with a little snap to them rather than completely mushy. Jim made the cranberry sauce, a recipe with a lot of Jack Daniels in it. I have never liked cranberry sauce but I tried it. It was very good. The booze was definitely noticeable.
We all cleaned our plates. My friend Murph cleaned four or five plates, actually. When everything was laid out on the table before the meal we thought we were going to have enough leftovers to feed twenty people, but we actually ate a lot of food and didn't have as many leftovers as we'd expected. We all took some. Kevin later informed us that he was hungry when he got home so he ate his that night. Jim ate his the next morning for breakfast, with a slice of pie. I put a bunch of leftover turkey on a piece of garlic naan and baked it in the oven for lunch the next day. It was awesome. 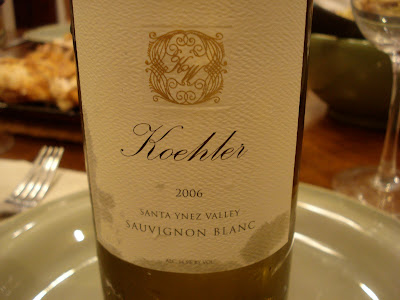 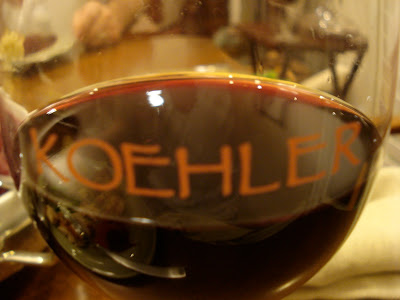 Back in April, Jim and Rachel got married at the Koehler Winery in Los Olivos. So we opened up a couple bottles of Koehler wine - the Sauvignon and the Cabernet. 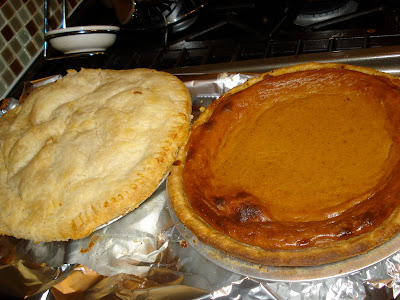 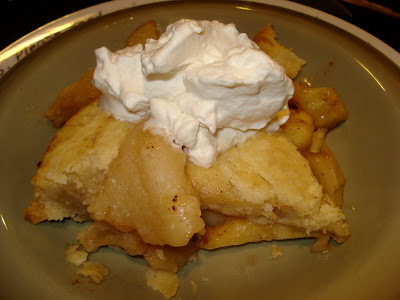 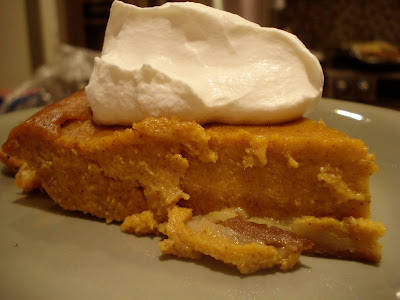 We had considered making pies - like we have in years gone by - but Rachel's uncle gave her an apple pie earlier in the week and Elizabeth and I decided that rather than buying all the ingredients and possibly making a sub-par pie, we should just buy one from Pie 'n Burger. So I went there the day before Thanksgiving and bought us a pumpkin pie, fresh out of the oven.
Now, I am not a pie person - not even a dessert person, unless it's cotton candy or homemade ice cream. But both pies were fantastic. My favorite was the apple so that's what I had a slice of, although I took a couple bites of the pumpkin.
After dinner we all watched National Lampoon's Christmas Vacation, then Elizabeth and I went home completely full and went to bed early. Another great Thanksgiving.
Posted by JustinM at 11:19 PM

This was my first official time having a fried turkey and I must admit is delicious. All the sides were fantastic, and I'm so glad we decided to get a pumpkin pie from Pie and Burger. They make the best pies! It was a great Thanksgiving.

Oh wow, your pics are getting me hungry again. Thanks.

I think only today have you started to eat again.
What's for next year? BBQ Turkey?!

No, I've been eating pretty much nonstop since Wednesday. A few of my best friends from high school were in town for the holiday and we ate and drank together all weekend for the first time in years. It was a great time, but I am worn out now.

I fry a turkey every year. If my friends wanted me to BBQ one instead, I would, but the fried turkey is requested every year.

Everything turned out fantastic- the stuffing, mashed potatoes, beans, just great. And easily that fried turkey was the best turkey I have ever had in my life. Can't believe I forgot to bring home leftovers.