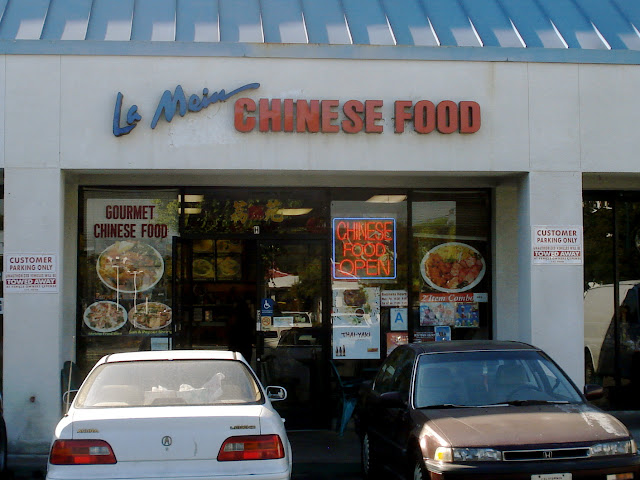 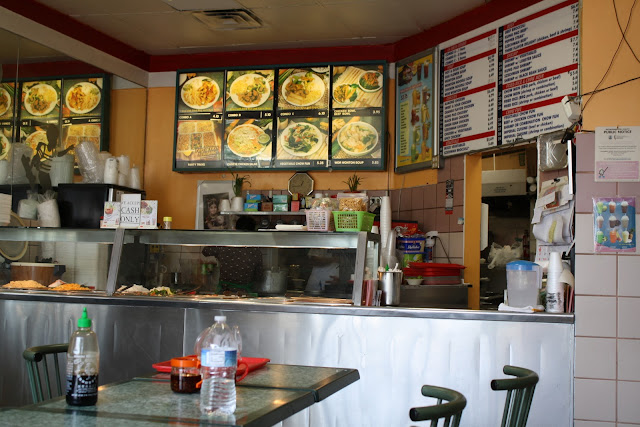 A dozen years ago I was staying with some relatives on the Central Coast and I offered to buy them dinner for putting me up for a few days. We decided to get Chinese food. "This isn't going to be as good as what you get down your way," my cousin Alex told me, "but I think it's the best of what we have up here." We ordered three chicken dishes - General Tso's, lemon, and sweet & sour. I will never forget the sight of the food as we opened the styrofoam containers. The chicken was all exactly the same: overly-breaded chicken cutlets cut into uniform strips. The only difference was the sauces poured over each, all of them thick and sugary and roughly the consistency of that neon slime I used to buy out of vending machines when I was a kid. The food coated my mouth like cough syrup and made me gag with each bite.

Well, I thought to myself, if you live another 70 years, you'll never have a worse Chinese meal.

But we'll come back to that.

I have noticed La Mein for years. It's in a shopping center on Fair Oaks that I visit every once in while - every couple of months I go there for a sandwich from Subway, and whenever my friend Troy comes back to visit from Dallas he begs me to go to El Pollo Loco with him. La Mein always seems to have a good crowd. So the other day, when I was out for a walk and the desire for Chinese food hit me, I considered ducking into Golden China. But I had worked up quite a sweat doing some hill climbs, and I didn't feel like sitting down in a restaurant. I figured it would be the perfect time to try La Mein.

It was crowded when I walked in but there was one small table vacant. At the counter I decided to get a two-item combo: black pepper chicken and orange chicken with fried rice. I started to get a hint as to why La Mein is so popular when she told me the price: $5.55. 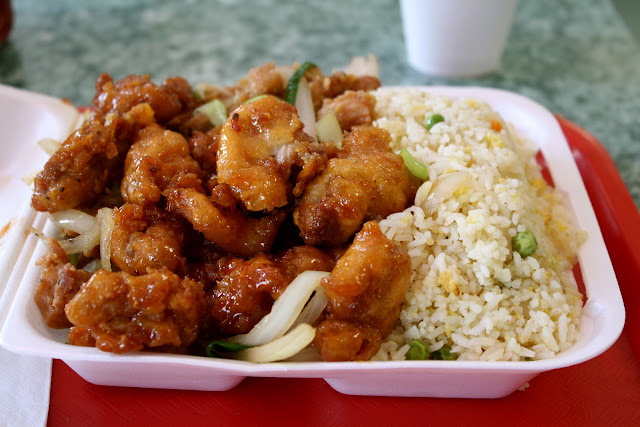 And then I really started to understand when I opened the box. Are you freaking kidding me? A couple of times over the years I have ordered three-item combos at Panda Express and received less food than this two-item combo. (And paid several dollars more.) The top of the styrofoam actually bulged against the bulk of the food inside. 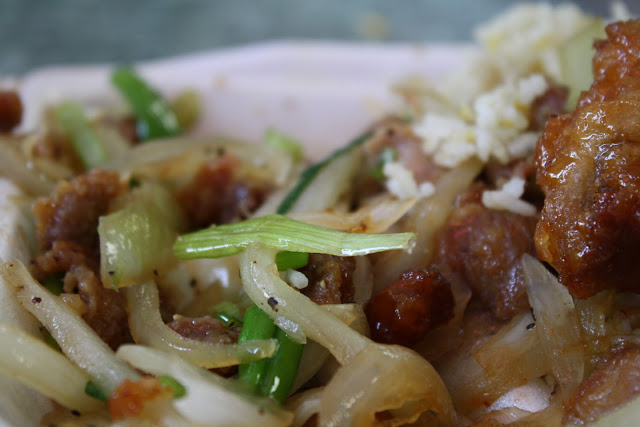 The woman spooning my food into the box had asked me if I like onions, and when I said yes she poured in two giant servings. And they were okay. Unfortunately, that was the only tolerable part of the meal. 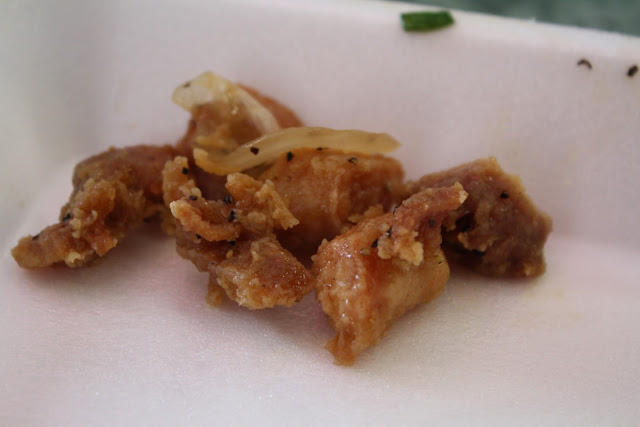 The black pepper chicken was really only salty, and too tough to chew. In those supermarket vending machines I mentioned earlier, next to the one dispensing slime, was always one containing SuperBalls. You know, those compressed synthetic rubber balls that, if hit with a tennis racket, will fly 100 feet in the air then bounce perhaps 90 feet upon landing. This chicken was more or less that consistency. 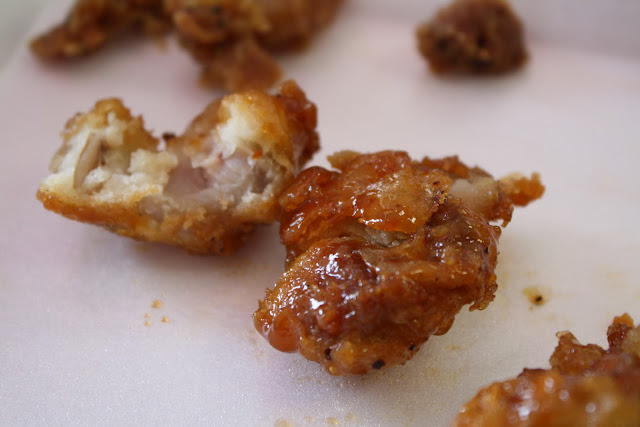 But the black pepper chicken was like Thomas Keller's fried chicken compared to the orange chicken. I just... I am not sure if I can convey how awful it was. But I will try: the dark meat chicken was rubbery in some parts but completely solid in others. And the coating was without question the most sugar-filled chinese food I have ever tasted. At one point I bit into a piece and got only batter in my mouth; it tasted like rock candy. The sauce was syrup.

I have eaten orange chicken at dozens, perhaps more than one hundred restaurants. This was the worst I have ever had, and it's not even close.

The whole time I was at La Mein - and I'll be honest, it was less than eight minutes; I couldn't eat more than a few bites of this food - the place was busy with customers. Maybe the food isn't always this bad (although I have a hunch it is). But it's cheap and there's lots of it.
Posted by JustinM at 10:00 AM

Your description of the identical chicken at that other restaurant reminded me of a notorious place in southeast Portland, Wong's Garden.

Basically Wong's got plenty of foot traffic from being right between my college and a Safeway. The food, though, was unthinkably bad: the only difference between the orange, lemon, and sweet and sour chicken was that the first two had a single slice of fruit on top of the neon sludge. Some of the deep-fried food was predictably okay, but even the egg rolls were better at Safeway.

It did have its supporters. One of my good friends spent three or four years in China post-Portland, surrounded by great food, and yet he still considered Wong's to be among the best Chinese food anywhere. He's a guy who once took me to Carl's Jr. for a surprise dinner, though, so that should tell you something.

Only kidding. I'm not sure if you've seen me write that I've been to Portland many times - more than any city outside of Southern California. My brother went to Willamette and whenever I'd visit him (several times per year) we'd go to Portland. He had several Asian places he liked there, but with only one exception I was not a fan of any of them. (But none sound as bad as Wong's.)

I think these places get away with serving such horrible food because it's cheap and there's lots of it. I don't want to get too descriptive about the crowd at La Mein because I'm not sure how to do it without sounding like an elitist asshole. But it was obvious that they cared about quantity and not quality.