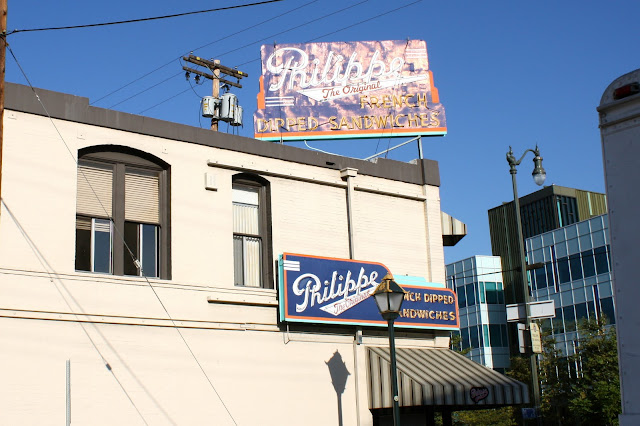 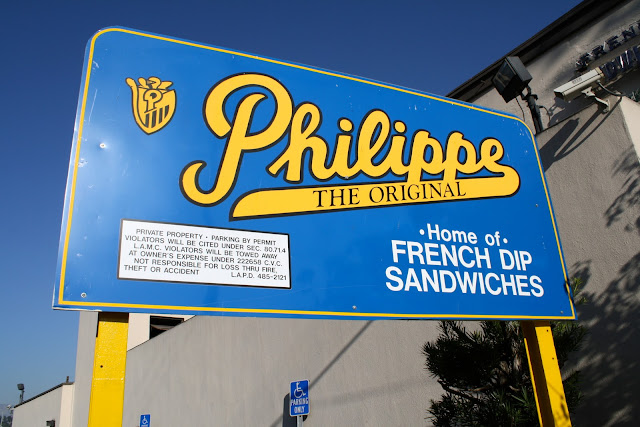 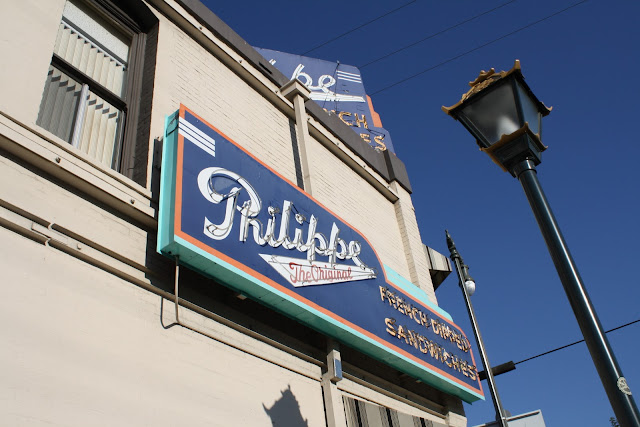 The first time I took Elizabeth to Philippe's, almost four years ago, one of her first reactions was: "My dad would love this place." So there was no question we were going to be doing that at some point over the week they were in town. On Friday we all drove out to the Westside - Santa Monica Pier to be exact - and then cruised back to downtown on Wilshire. I suggested we go by Philippe's for lunch. It was in the afternoon and I figured we might have beat some of the crowds.

In all of my visits to Philippe's, it was the most crowded I've ever seen it. 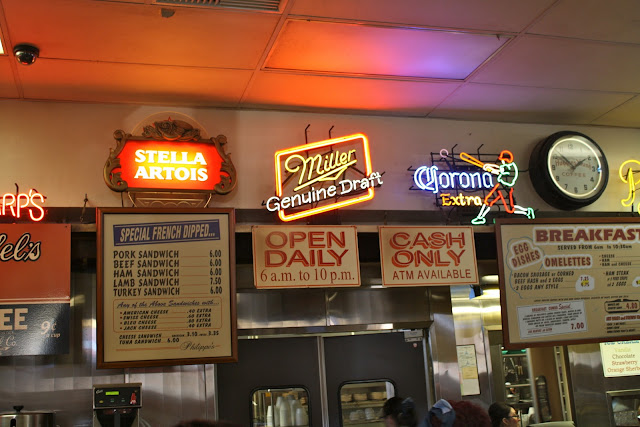 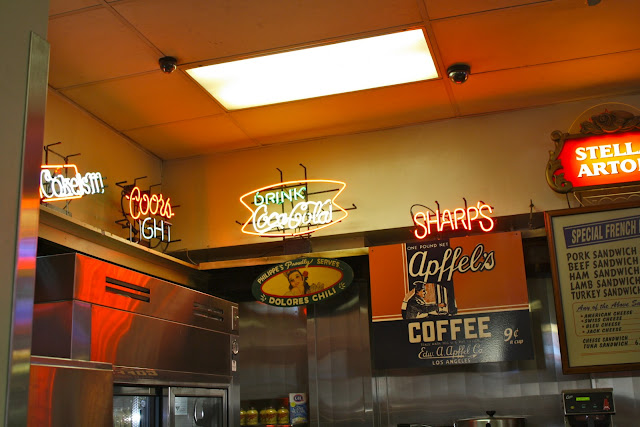 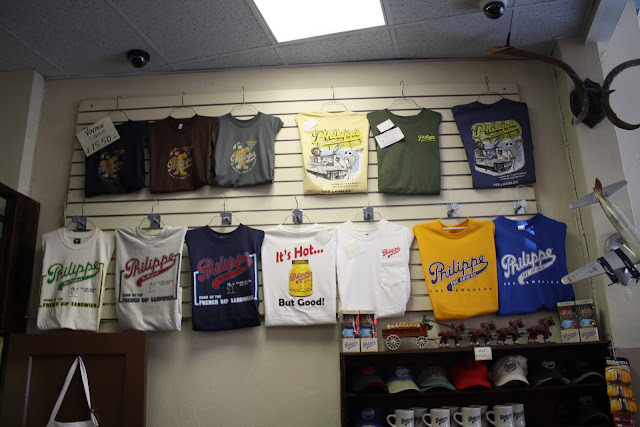 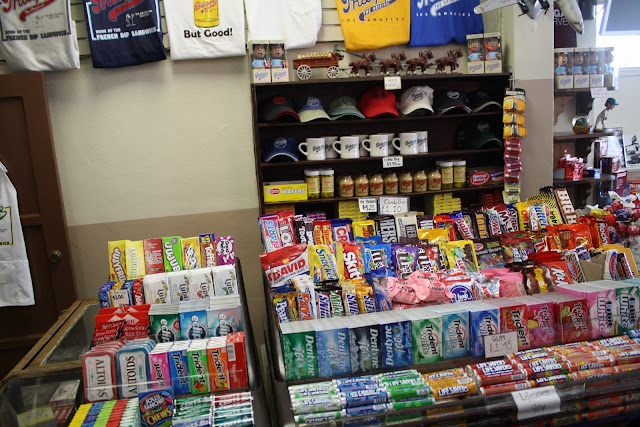 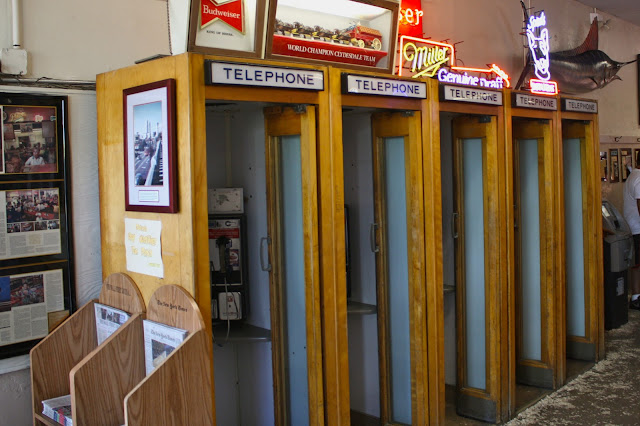 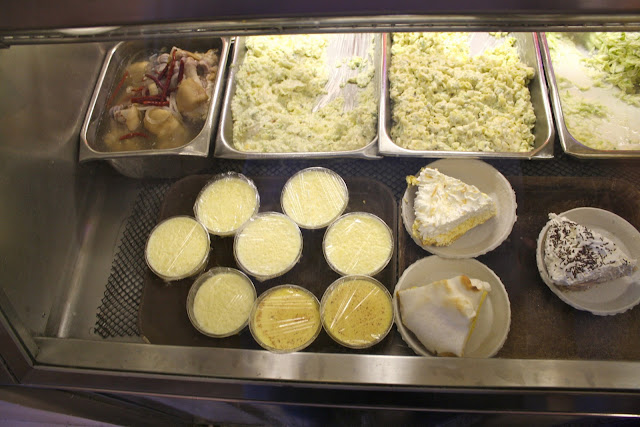 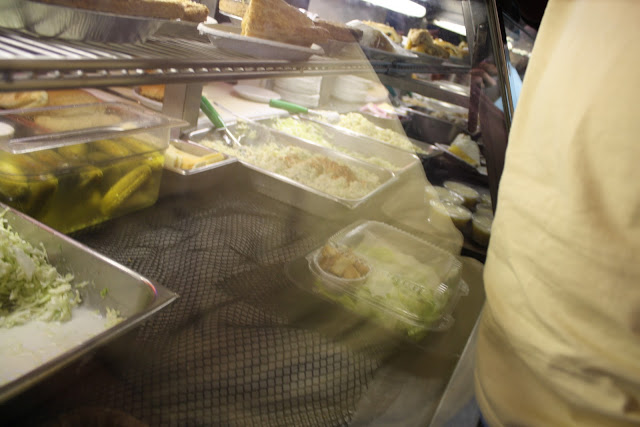 We stood in line for quite a while. Elizabeth and Kathy went to find us a table (we had to sit upstairs; my first time ever) while Rick and I waited. I told him how my mom has been coming here her whole life and how my dad used to come here with his dad, an L.A. County Sheriff's Deputy who sometimes worked at the nearby Hall of Justice. I pointed out that Dodger Stadium was just up the hill and that on game days the lines are just as long. We chatted with a man and his son in line ahead of us. We inched forward every few minutes.

"Hey," he said, "I've been around the block a few times. When there are this many people in a joint at two o'clock in the afternoon, it's because it's good. And I don't mind this kind of communal wait, it's all part of the experience." 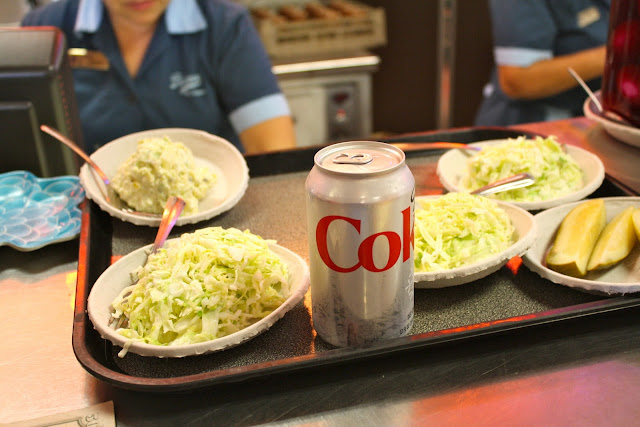 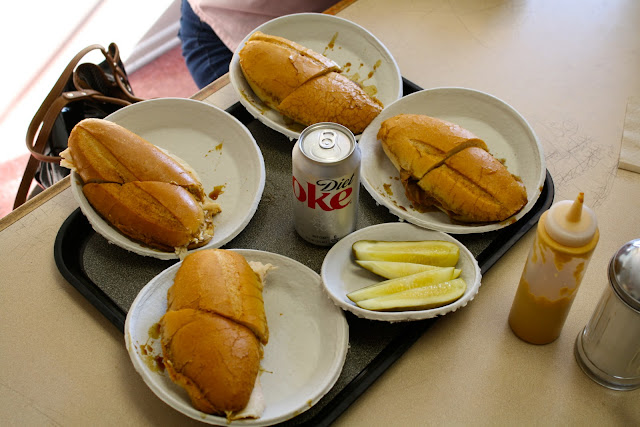 4 sandwiches (beef for Rick and Kathy; turkey for Elizabeth and me), three iced teas, one Diet Coke, three cole slaws, one potato salad, and, even though I told Rick we did not need it, a pickle. Total cost: 35 dollars. That's a good price if you merely like your meal. But it turned out that all four of us loved it. 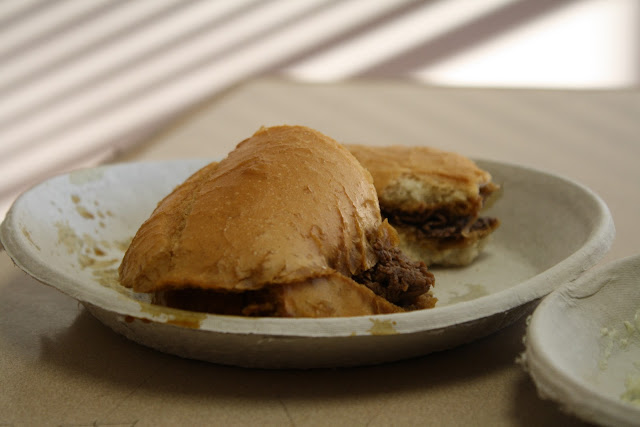 This is the only picture of the beef sandwich I took, as I was busy devouring my own sandwich. 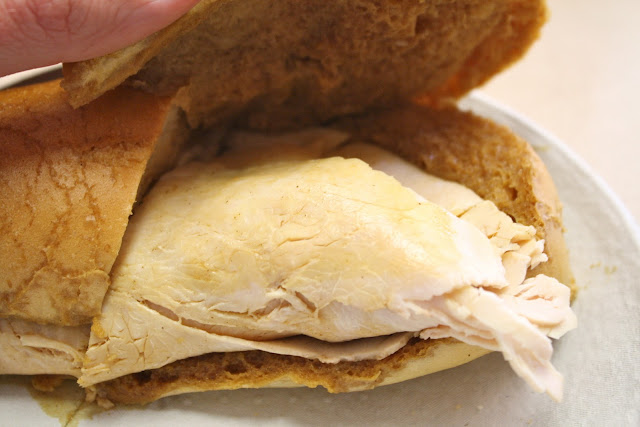 My beloved turkey sandwich, double-dipped. Man, I love this thing, and if I had to eat it as is, I would not have one complaint. But I don't have to eat it as is. 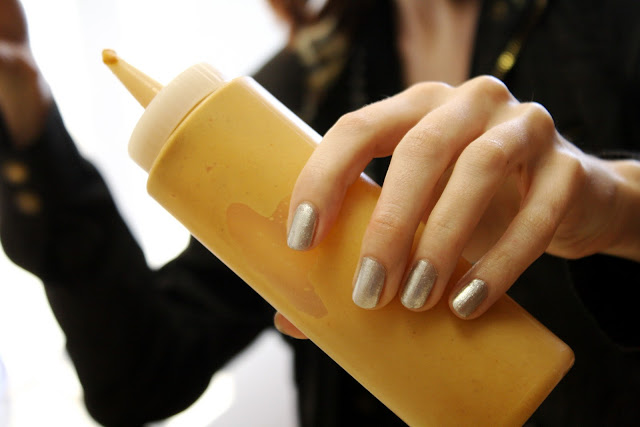 Because every table has a squeeze bottle of Philippe's ridiculously-hot-but-oh-so-delicious mustard. 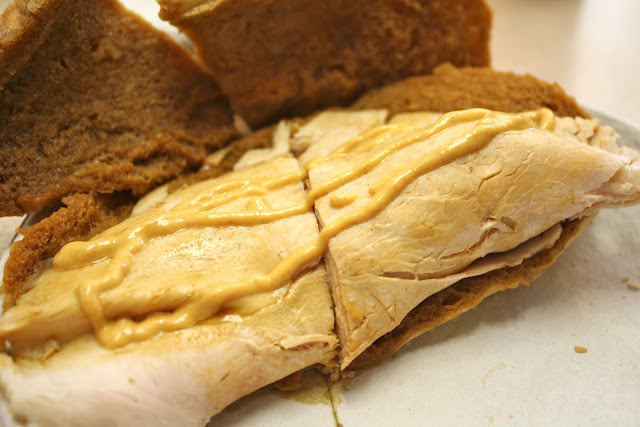 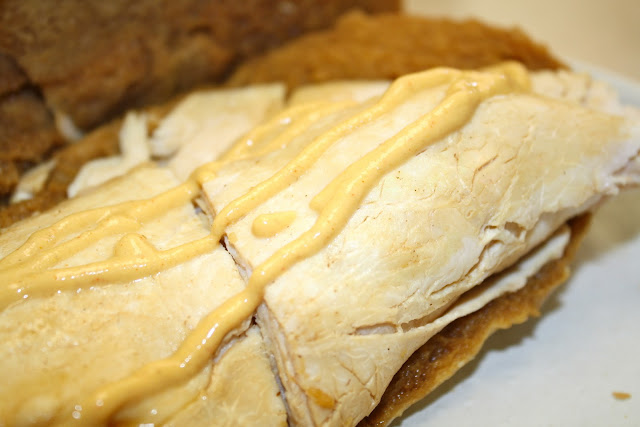 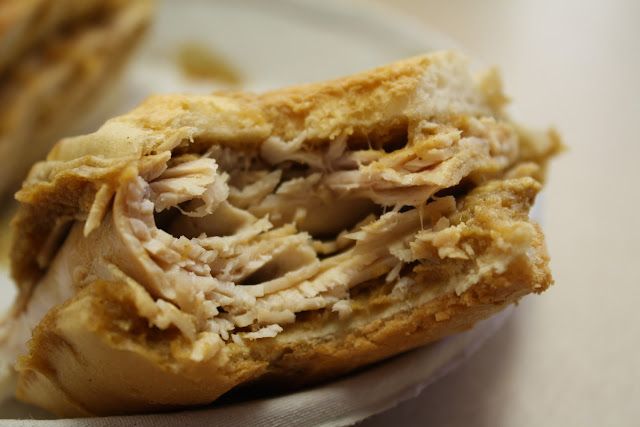 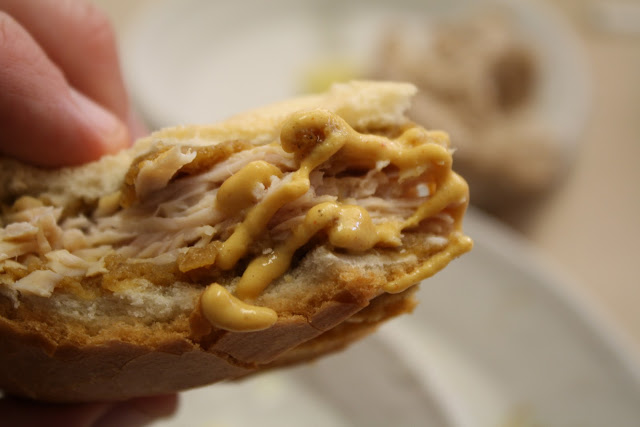 Each bite of the turkey and mustard combo is good, but every few bites you hit a piece of the mustard that is particularly spicy and immediately clears out your sinuses. 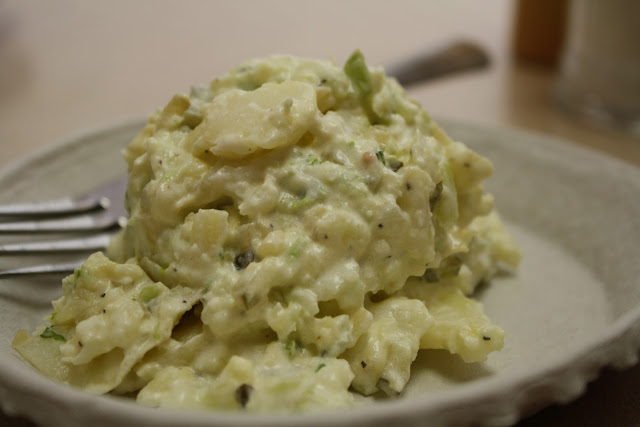 I don't think I've ever had the potato salad before, but Rick enjoyed it. 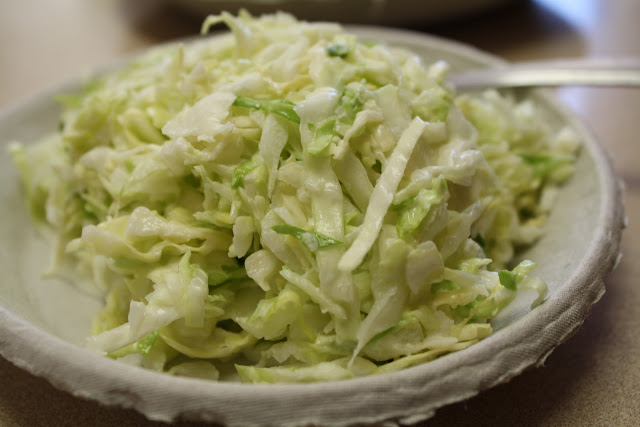 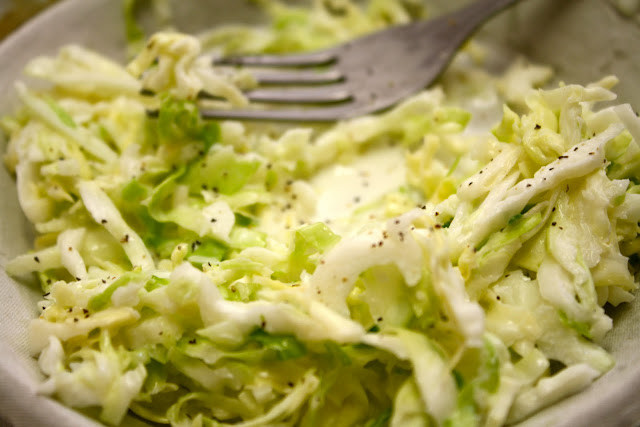 The reason I've never tried the potato salad, though, is that I always get the cole slaw. It's runny and it's mostly mayonnaise-based, which are both things I don't normally like in a slaw... but I love this one. I can't explain it. Perhaps it's because the cabbage is always so fresh. And, sprinkled with several shakes of pepper, I like it even more. 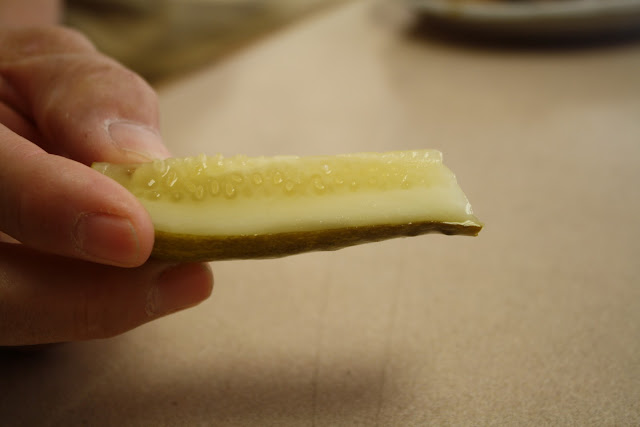 The pickle, however, was kind of soggy and, though I took a bite of it, it did not go anywhere near my sandwich. Rick held it up and I took a photo. "Is a picture of my pickle going on the internet.... again?" he asked. (He makes hot daughters, not funny jokes.)

Elizabeth and I loved our meal, just like we always do at Philippe The Original. And our East Coast guests? They loved it as well.

"This is the second-best French dip I have ever had," Rick said. "And I've had a lot of them. What a great lunch."
Posted by JustinM at 9:00 AM

It looks so good, love your pictures! I'm going for lunch today!!

Great post on Philippe's! Thank you. I handle their marketing and would love to use your blog as a guest post on our blog page.

Love the hot mustard. And next time you're in DT and you have a little time you should take Elizabeth to Starlight Nail and Hollywood Beauty they are right down the street from Philippe's. I think she might enjoy it.

mmm i never made it to Phillippe's when I lived in LA and always regretted it. Good thing I will most likely be moving back and will try to take my Justin to this spot when we're back for x-mas. Lamb sammie all the way for me.

What do they mean when they call themselves "Phillipe the Original"? The Original, what???

It's the original french dip. Though Cole's might be the real original. Just call it Famous Maybe Original Philippe's.

I have to say, when I went there a few years ago I was a little put off by the coleslaw. The sandwich was great, but the slaw was extremely tangy, just some sort of unusual recipe. I like those egg-carton-like bowls they use, though. I'll give it a try again this summer, along with the other creamy salads.