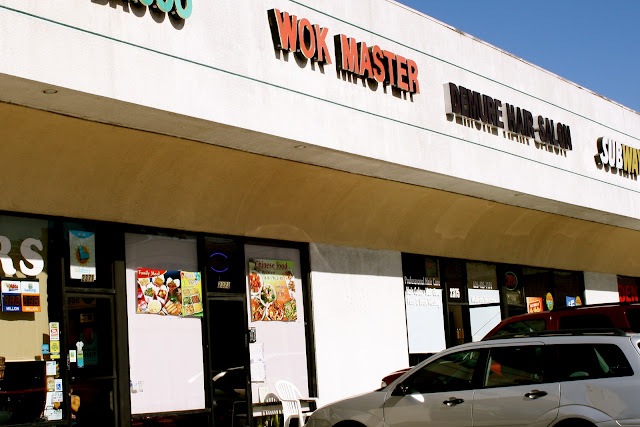 After I wrote about La Mein the other day, a reader emailed me to say I should give Wok Master a try, specifically for the orange chicken. It's a strip mall on the corner of Sierra Madre Blvd and Colorado, but I'd never considered going there. Years ago - I'm talking more than a dozen years ago, maybe even back when I was a teenager - I ate at a takeout Chinese place in this strip mall and it was (well, until La Mein the other day) the worst Chinese food I have ever had in the San Gabriel Valley. It was the kind of place with steam trays filled with food that appeared to have been sitting out for a day or two. I guess I assumed that place must have been Wok Master.

But as my dad has long told me: never make assumptions, they're always wrong. 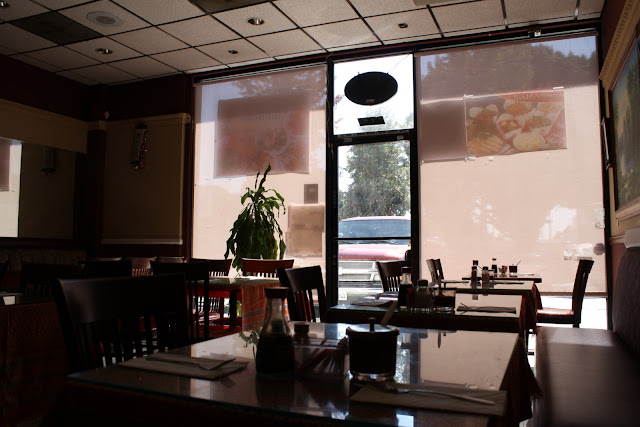 Wok Master appears to do a brisk take-out business, but it's not the place I ate in all those years ago: there is a not-fancy-but-not-shabby dining room with sit-down service. 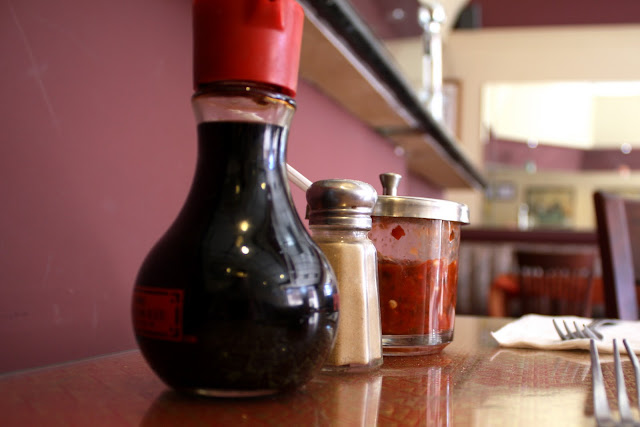 I wasn't in a hurry so I decided to eat in. 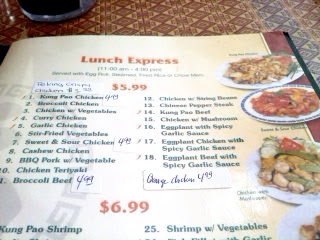 I took a picture of the menu with my phone, not my camera. So it's not very good. I asked the waitress what the most popular items were. She said "All the ones with a handwritten price. We lowered the prices on our most popular items to make it even easier for people."

And, as usually happens at places like this, she told me the two most popular dishes were the orange chicken and kung pao chicken. Since the reader had recommended the former, that's what I ordered. She asked what kind of soup I would like and I said hot & sour. 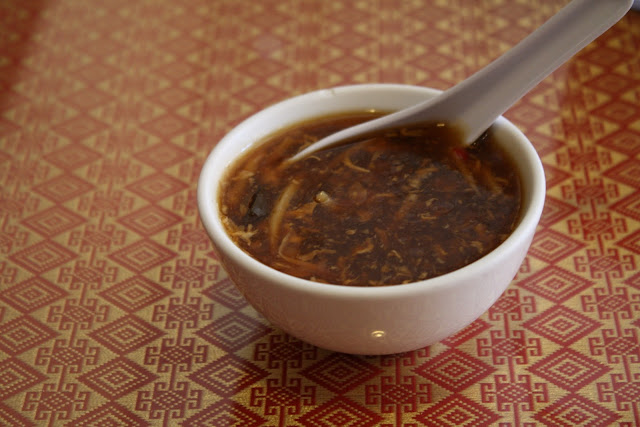 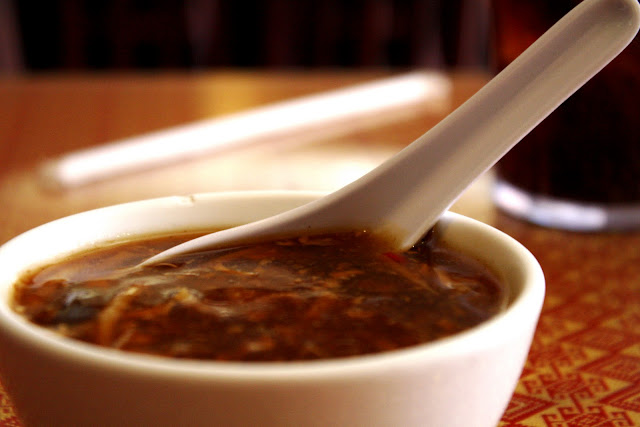 She brought me my Diet Coke within 30 seconds and my soup within one minute. I ate the soup but there was nothing special about it. If I ranked all of the hot & sour soups of my life on a scale of one to ten, with one being the gelatinous, flavorless junk in which you can stand up a fork and ten being the spicy, hot liquid that gives a euphoric feeling, this would be a 5. In fact, from now on I can simply judge hot & sour soup by saying it's either better or worse than this. 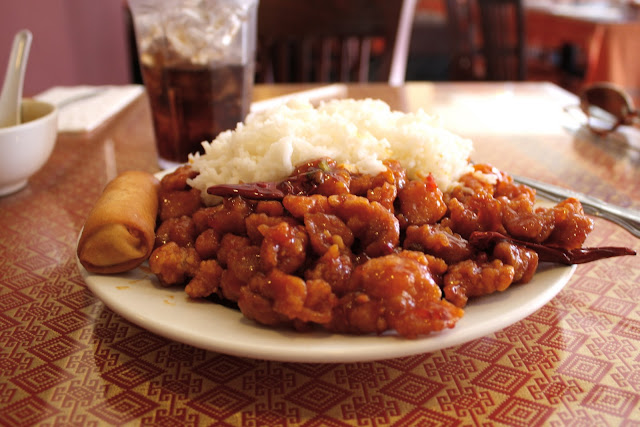 I actually let out a small laugh when the plate was set down in front of me. This picture doesn't do justice: the chicken was piled three inches high. The rice was piled on top of even more chicken. All this for only $4.99? 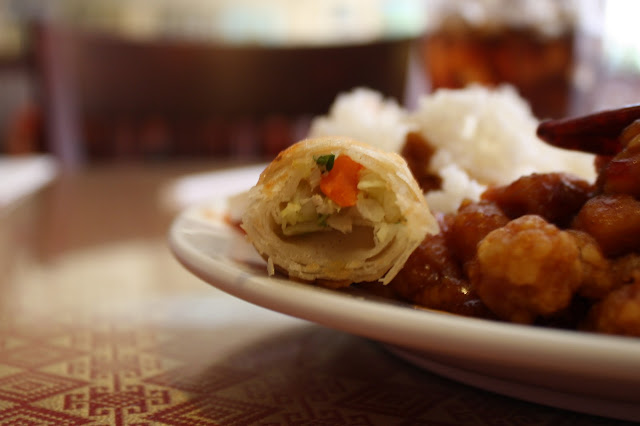 The egg roll was not good. It was over-fried and had almost no flavor. I used some of the chili sauce on it, but that barely helped. Do you remember my categories of egg rolls? I will post it again:

5) The best. These have just been fried in front of you, the oil burns your fingers and probably your mouth, but they are so damn good you don't mind. My cousin June's egg rolls and the egg rolls at the Portland Saturday Market are the only two I can think of offhand that belong in this category, although I have probably had two or three other orders in my life that would have received this exalted ranking if I'd thought of it at the time.

These egg rolls belong in the third category. 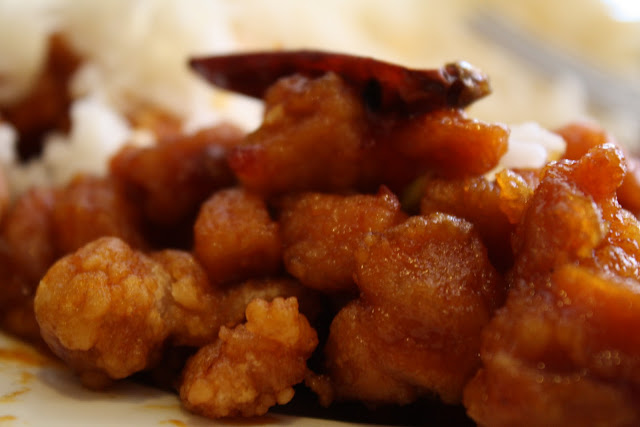 But really, when you only get one egg roll and it's included with the meal, does it matter how good it is? Not to me. The chicken was what I cared about. And it was quite good. I would not call it great, but it was tender and juicy. There was no pool of oil at the bottom of plate, like one or two other places I could name. And the sauce was very good. It wasn't too sweet - it was a far cry from the rock-candy-tasting sauce I had the other day - and it didn't overpower the chicken.

I could only eat about half the chicken and the waitress boxed up the rest for me to take home. 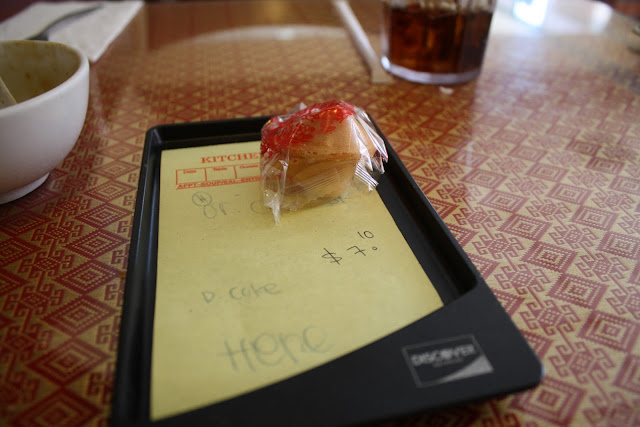 The total for all that was $7.10. What exactly do you tip in a circumstance like this? I sat at a table, the server was friendly and answered my questions, she refilled my Diet Coke twice, and she boxed up my leftovers and put them in a bag for me. 20% of $7.10 is $1.42. That doesn't seem right. 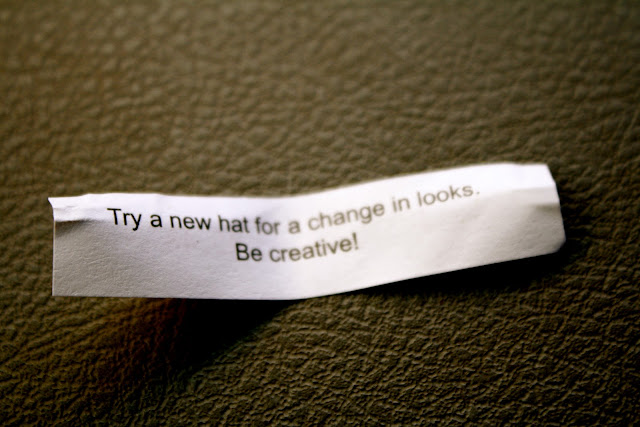 I opened my fortune in the car. Funnily enough, I was wearing my Quakes hat. For those of you who aren't baseball fans - or more specifically minor league baseball fans - the Rancho Cucamonga Quakes were the Angels Class A - Advanced team for a decade, from 2001-2010, before switching to the Dodgers last season. And I've had my hat since 2003 - it's super comfortable. (I somehow have misplaced the Shawn Wooten bobblehead I received the same night I bought the hat.) But I'd just been thinking, while looking in the mirror at Wok Master, that it's probably time to let that hat go.

I really liked Wok Master. If it were closer to me I could see myself going there much more frequently and trying out their different items. But being where it is and being how many similar places there are in the San Gabriel Valley, I realize it might be quite a while before I make it back.
Posted by JustinM at 10:54 AM

That looks like my kinda orange chicken - not the huge battered pieces you showed the other day.

I'd probably have made it an even $10 in that situation.

Michelle: That chicken the other day was an abomination. I'm not a Panda Express fan, but their orange chicken is 100x better than that stuff was.

Charlotte: That's what I would normally do, too, but while I was dining, five people picked up takeout and not one left a tip (although one paid by credit card so I guess he could have). Considering my drink was constantly filled and they gave me enough food for two meals, I made it $11. A little karma never hurt, right?