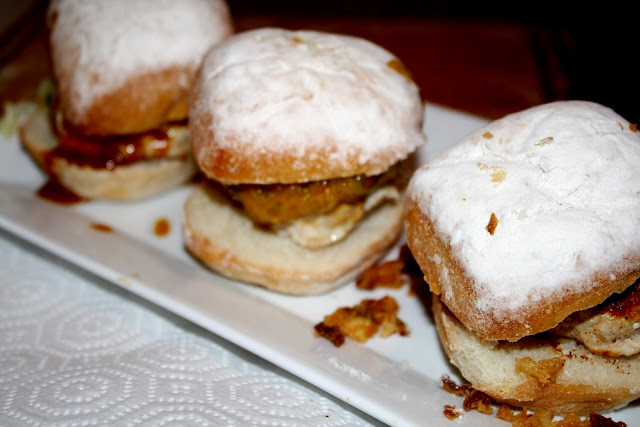 There was a time, like many people when they were teenagers, when I could eat anything I wanted. Lunch was often Taco Bell or Burger King (on the days when my high school cafeteria wasn't serving fried chicken sandwiches or burgers); dinner was often a Jack's Spicy Chicken, toasted raviolis, fries and a Dr Pepper.

Of course, in-between those two meals was usually an hour of weight-lifting and two hours of basketball practice. I weighed 155 pounds and I could dunk a basketball. I'd be willing to bet neither of those things happen ever again.

Then high school ended but I kept getting older. Funny how that happens. And I wasn't doing 1/10 of the exercising that I used to. But my diet didn't really change. Actually, that's not true, my diet did change: I started drinking beer much more frequently. A couple of years later I said to myself "You're going to be 21 in six months. You're going to start going to bars. You gotta look better than this."

So I went on a big diet for several months. I won't go into all the details but I will tell you two, because they were huge: I stopped drinking beer and eating fast food. I had jury duty that spring, back in the days when you had to go in every single day for two weeks straight. I made the effort to not have a drop of alcohol or any fast food during those two weeks, and I lost at least 15 pounds doing nothing else.

And that's when I fell in love with turkey burgers. I tried the frozen kind from Costco and thought they were fine, but I was watching Food Network - this was back when Food Network was not just a bunch of reality shows and travel shows, but actually showed you how to make things, and I'm not ashamed to say I often watched it four hours a day. (Well, maybe a little ashamed, but I'm amongst friends here.) One morning I saw someone take fresh ground turkey, mix it with onion and cilantro, and grill it. I became addicted. I would buy the 99% fat-free turkey from Jennie-O, add those two things and slather it with Sriracha. Sometimes I'd eat two... it was still less calories than one Jack's Spicy Chicken.

Long story short (er, shorter,) I lost 50 pounds in six months. These days I don't do nearly as much healthy eating as I did back then - probably not a surprise to you, dear reader - but every once in a while I still crave a good turkey burger. Last night I decided to make some. 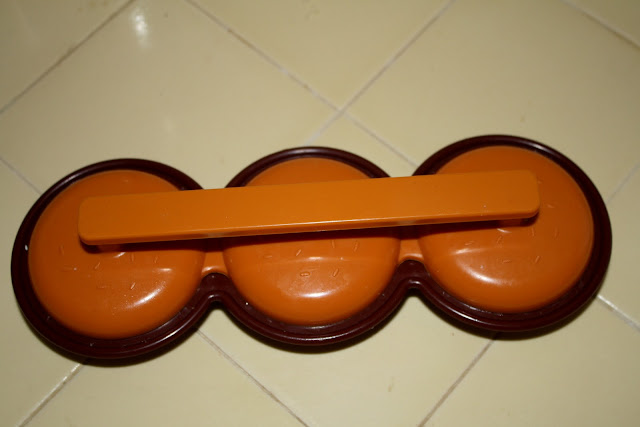 Back in July, on my birthday, I went to lunch with my parents and walked around Old Town. At Sur la Table they bought me this little plastic slider press. It was only ten bucks and they asked me twice "Are you sure you don't want anything else?" but I didn't: that was great. I envisioned myself making sliders every day. In actuality I've only used it once, making sliders for a big party two months ago. I decided to use it once again. 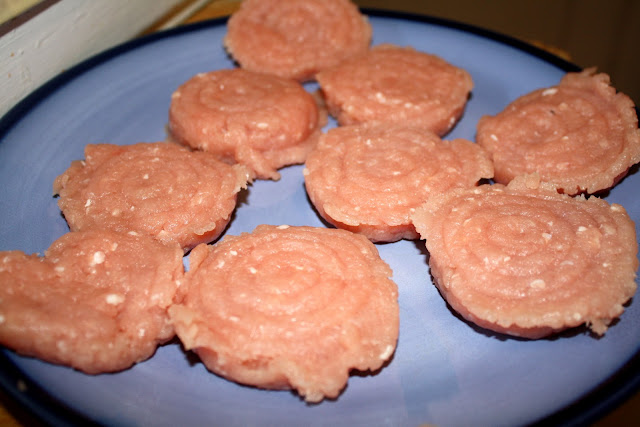 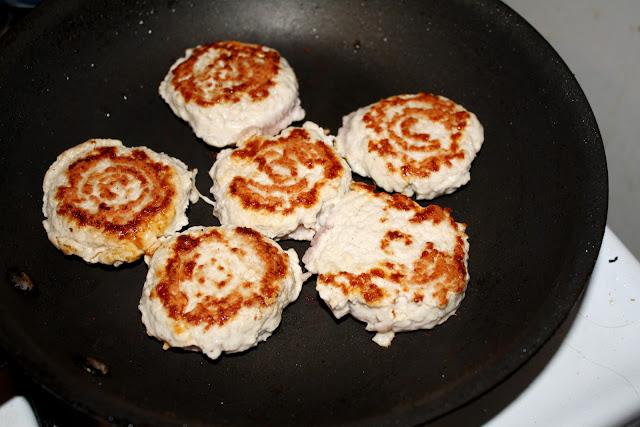 I cooked six of them in a pan: five for me and one for Elizabeth. (Only kidding.) 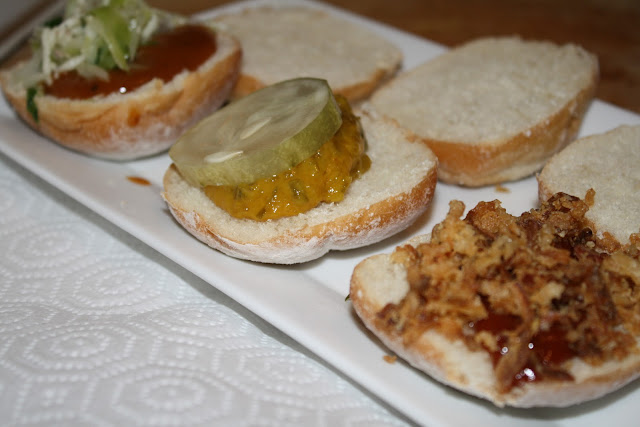 You probably won't be surprised to learn that I decided to make three different varities of the mini burgers. I used soft potato rolls for each. 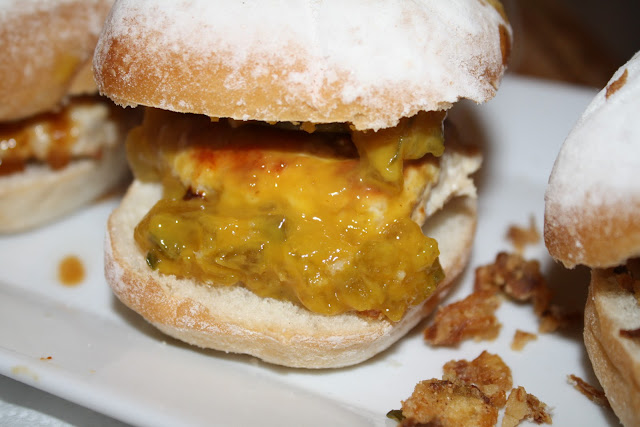 This one was topped with a thick slice of deli pickle and E. Waldo Ward's mustard relish. It was great and the messiest of the three, but not my favorite. 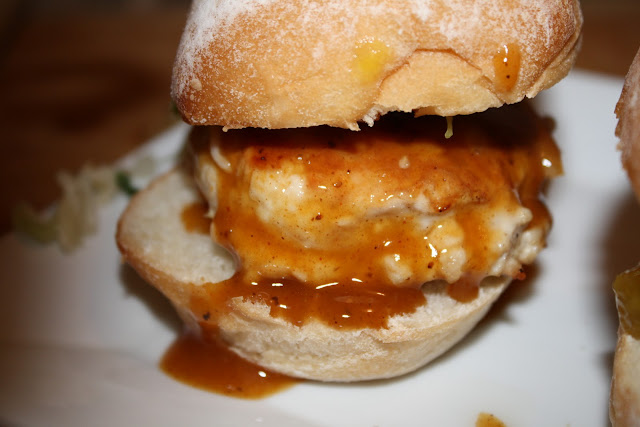 This one was topped with fried onion pieces and Gates barbecue sauce, which is my second-favorite tomato-based bottled barbecue sauce in America. (The only place I know of that sells it in Pasadena is Barbeques Galore.) This was not quite as good as the first one, and definitely not as good as the next. 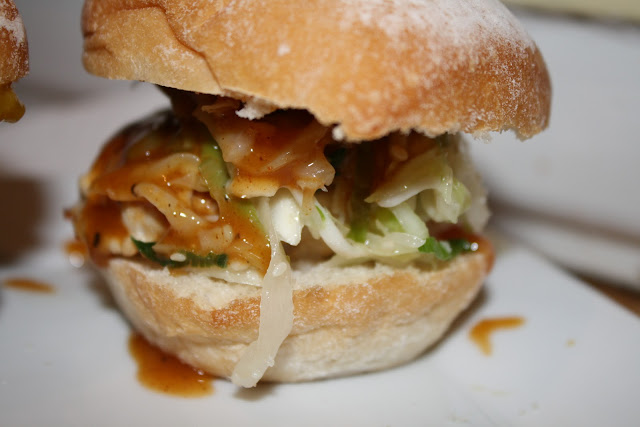 My favorite was the mini burger topped with Bristol Farm's peculiarly-named "Chinese cole slaw" and the The Salt Lick's mustard-based barbecue sauce. 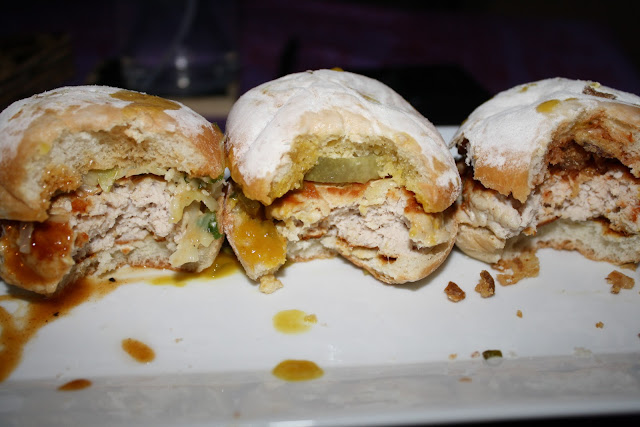 I have three patties left (although only two buns) so I'll probably make them for lunch. Actually, I might go make them for breakfast right now. 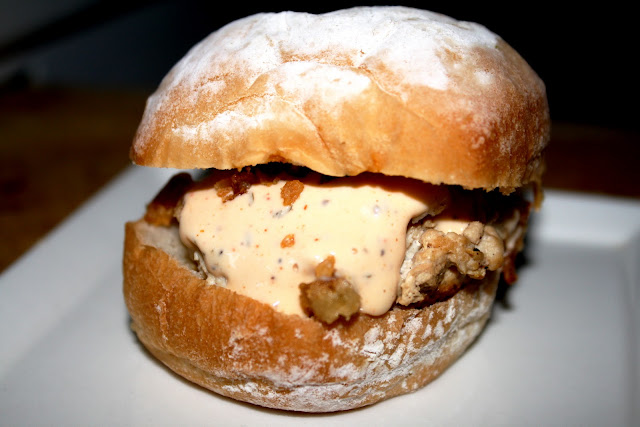 Yeah I went and had another one for breakfast, only this time I used the last bit of Popeyes "blackened ranch" sauce with fried onion pieces. Awesome.
Posted by JustinM at 10:45 AM

Have you tried the Gates Extra Hot? It's sooooooooo good. I'd be more than happy to send a bottle your way.

Yes, I have tried all the varieties, but to be honest I don't remember any of them other than the original. I will pick up a bottle of the extra hot one of these days, but thanks for the offer.

By the way, when you say you would be happy to send me a bottle, do you live in Kansas City?

Yes, I am Kansas City born and raised.

pp you drank alcohol before the age of 21? IM CALLING THE POLICE RIGHT NOW!

Great looking burgers, Justin. I grew up eating turkey burgers, but now that I've learned ground sirloin ain't bad for you, I like to make my burgers out of beef (also go free range bison on a splurge.) But 93/7 turkey is usually cheap, and it's so adaptable. What bothers me are people who think they have to make a meatloaf out of each burger because "it'll dry up." Why don't they just watch it a little closer when they cook it? By the way, those buns look outstanding!

Anon: Oh come on. It's not like I was using a fake ID that said my name was Justin Abdul Jabbar to go out and buy beer.

Oh, wait. I was. But I'm pretty sure the statue of limitations is up on that one.

Adam: Hi there. I really like bison burgers but I haven't had one in years. I should change that soon. The buns are awesome for sliders. I don't think enough people/places use potato flour buns.

I always get my Bison from a farm in MD. Been there myself. I'd pass on the stuff they have in most grocery stores because you don't know what cuts they are using. Try to find something that is in the 88-92% lean range. I don't think there is abig difference betwene organic vs. non-organic, but I like the taste of free range better, because the Bison get a variety of different grasses and provided feed.

I've also been known to throw some Bison liver and testicles on the grill. Very, very good eats if you can stand the somewhat, uh, unsual texture and foul smell.

Thank you. But I cannot.

Turkey burgers don't usually do it for me, but damn...that breakfast one with the blackened ranch sauce look really, really good!