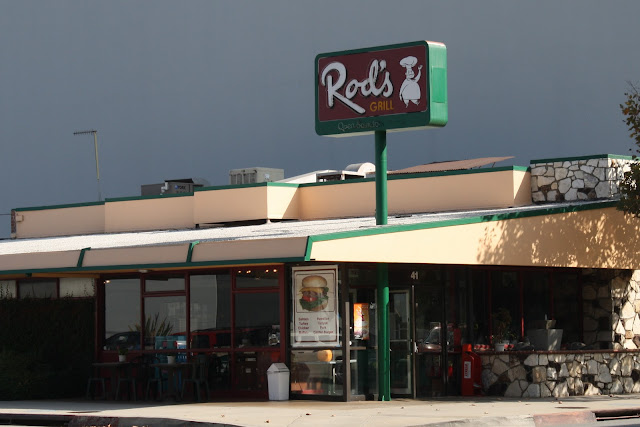 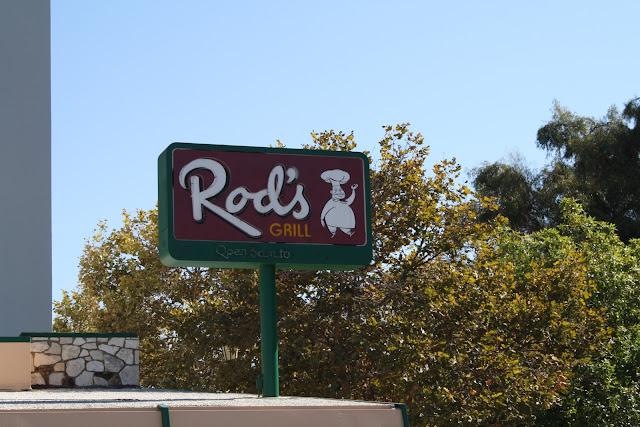 Rod's Grill has been in Arcadia, on Route 66, for more than half a century. I went there a few times as a teenager - probably for no other reason than that it's cheap - but don't remember ever going there as an adult. There are plenty of reasons for that: I always preferred Conrad's when I was in a diner mood; Rod's is often crowded and I don't like waiting; it's the only restaurant I can ever remember my dad flat-out saying "I hate," so I thought maybe he knew something about Rod's that I didn't and I should stay away.

But Elizabeth loves diners and I have told her for more than a couple of years that I would take her to Rod's one day. Not long ago we were going to the mall in Arcadia and both quite hungry. I drove to Rod's, parked a block away - it was, of course, crowded and there were no parking spaces - and we stood around inside for a few minutes waiting for a table. 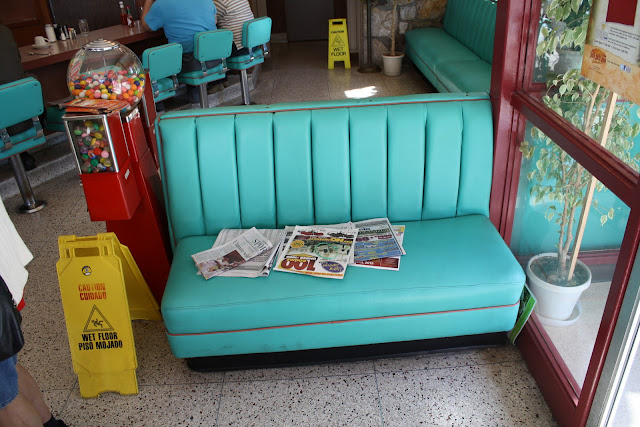 I will say this: Rod's is authentic. These teal booths and chairs are not there in any kind of hip way; someone at some point thought they looked really good. The customers were exactly what you'd expect: a few guys from the race track who were done working for the day, and old people. Lots of old people. Elizabeth's and my ages added together are 64 - that still would be below the average age of the diners on this morning. 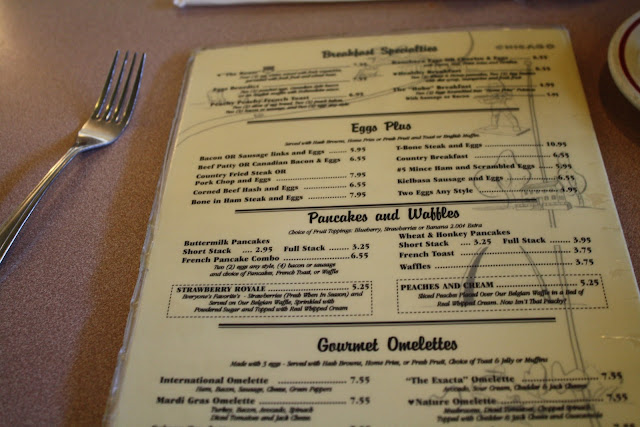 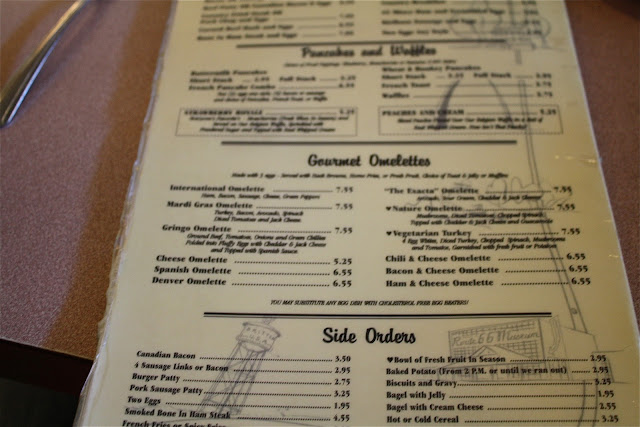 The menu is straightforward, with most of the items between four and seven dollars. The most expensive item, the steak and eggs, tops out at $10.75. 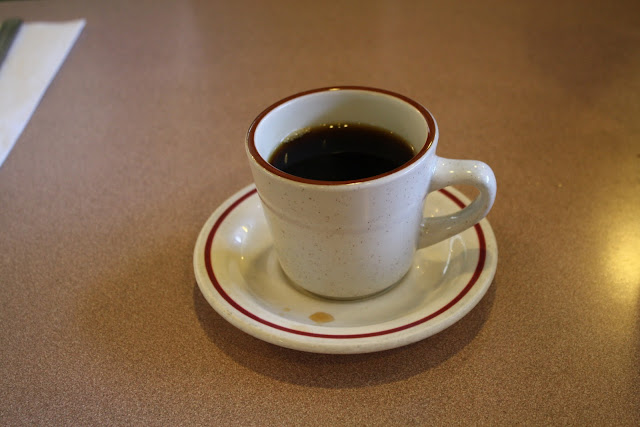 Ever see the movie "Harper," where Paul Newman plays a private eye who badly needs a cup of coffee and has to fish the previous day's coffee grounds out of the trash and re-use them? I imagine that's how this coffee was made. I'm sure at some point I've had worse, but I don't remember when. 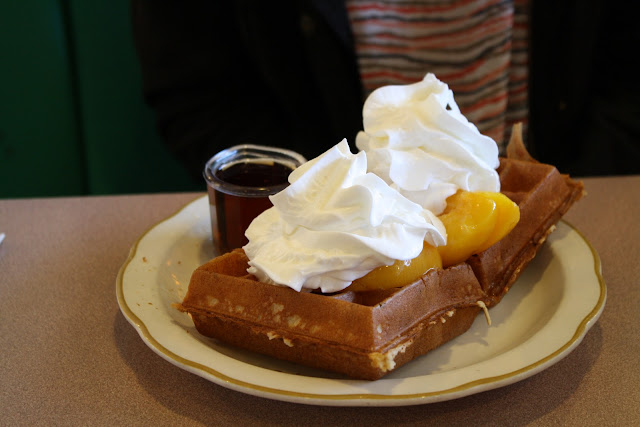 I'm certainly glad we cleared that up.

"I guess I'll take the peaches," she said.

And she liked the waffles, though the obviously canned peaches didn't have much flavor to them. 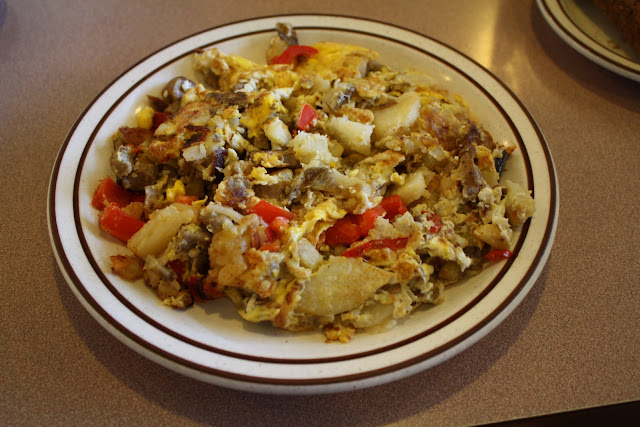 I ordered the "Hobo Breakfast," partly because I loved the name, but mostly because it sounded like the kind of breakfast I would make at home: scrambled eggs mixed with potatoes and peppers. You have the option of adding bacon or sausage for a buck more, so I opted for the latter. 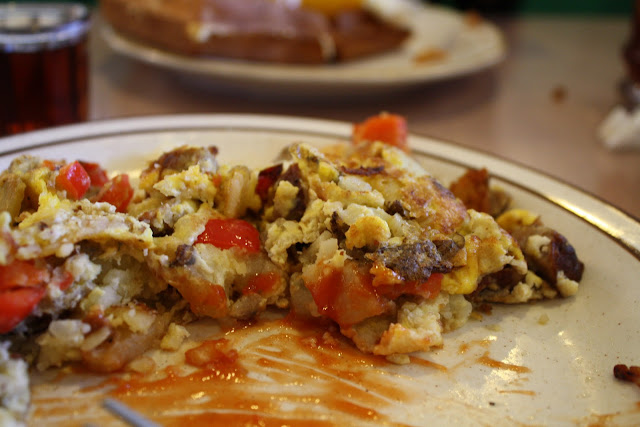 It was fine. Pretty much exactly what you'd expect. The only complaint was that it was dry and a little bland, so I added a couple drops of ketchup and several slugs of Tabasco. I ate the whole thing, though that had more to do with my hunger than the enjoyment of the meal.
I can't really praise or criticize Rod's. It is what it is. It's not very good but I can't imagine anybody walks through those doors expecting it to be. It can't hold a candle to any of the diners that I ate at in New York last year, and it can't compete with Roady's out in San Dimas. Rod's serves regular food to regular people and charges regular prices. (Even with the tip the meal was less than twenty dollars.) I can certainly understand the appeal in that.
But I made it through fifteen years of adulthood without eating at Rod's, and I know I will never go back. And I'm just fine with both of those things.
Posted by JustinM at 10:20 AM

I just have to say: i love your blog. Never stop writing! i drink my tea and read my list of food blogs every morning!

I agree! I never know if it's going to be fast food, a restaurant, a fancy dinner you've cooked. It's always a great surprise!

i hate when they put canned fruit on waffles or pancakes. gimme fresh, baby! fresh fruit or nuthin!

The teal booths had me at first sight. I also like how Elizabeth's waffles look so perky and fluffy. Well, that came out kind of odd sounding.

I remember going to Rod's with my dad as a kid. I was always excited to go cause we would sit at the counter and I always got to order from the regular menu....no kids meals for me.

The food is just OK now.......but I mainly go back for the memories.

I love the name :D, too bad about the underwhelming food.

Melissa: Thanks for the compliments.

Michelle: To be honest, most of the time I don't decide until I wake up in the morning.

Anon: I don't really like fruit at all, but if I did, I would agree with you.

Anna: Elizabeth's waffles are always perky and fluffy and sometimes she lets me touch them.

Matt: I can understand that. I bet a lot of people around town feel the same way about Rod's.

Rodzilla: Is there a restaurant anywhere in America called Rodzilla's? Because that would be awesome.

Like Matt, I have childhood-in-Arcadia memories there but I haven't been there in years, and I would be very, very sad if Rod's went away.