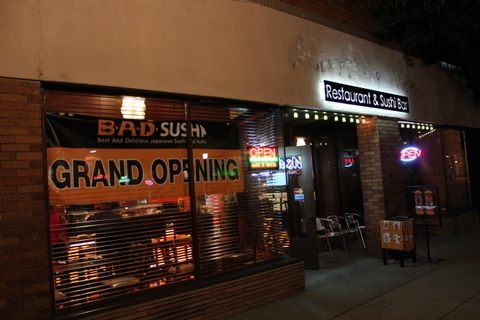 Tracie and I were out the other evening when it came time for dinner. I had noticed that yet another restaurant space has changed in the last few months: Cha Da Thai has become BAD Sushi. I loved the name - well, until I found out that it stands for "Best And Delicious" - and wanted to give it a try. 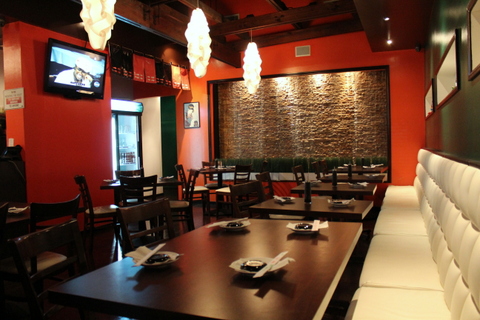 There were several tables occupied when we walked in, but all had disappeared by the time we finished dinner, which is when I snapped this pic. (It looks relatively the same as Cha Da, including the waving porcelain kitty, which made Tracie quite happy.) 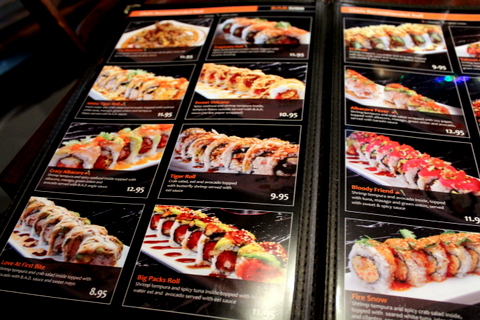 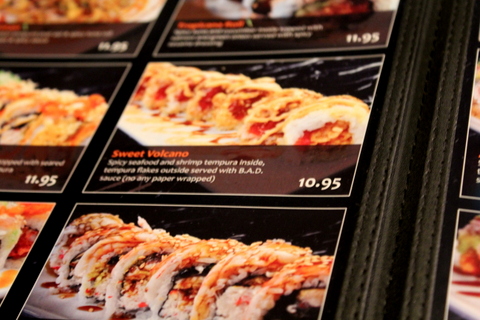 Normally I do not like menus with pictures, but I make one exception: sushi restaurants. (Part of it is that I have had too many sushi rolls advertised as not having avocado but that arrive with it anyway, so I like to see the photos.) 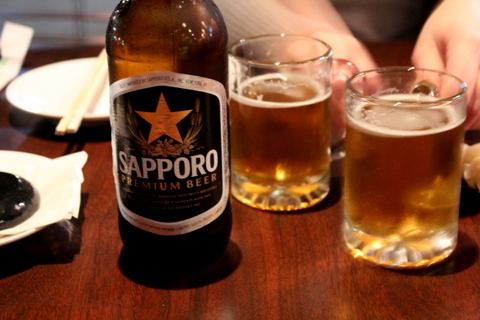 We started with a large bottle of Sapporo. There would be more. 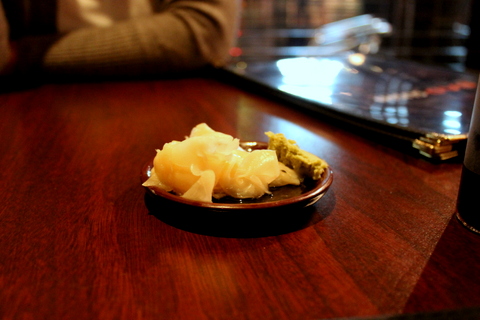 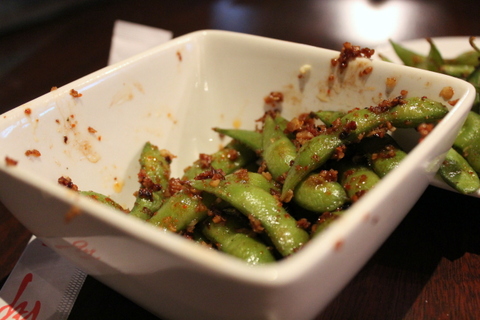 While I was in the restroom, Tracie ordered the spicy edamame, thinking I might like it because it's spicy. But I do not really enjoy edamame. Still, I tried these... nope, didn't like them. But she loved them. 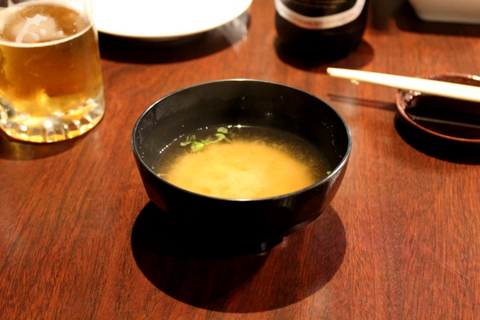 The soup was good, nothing too special about it. 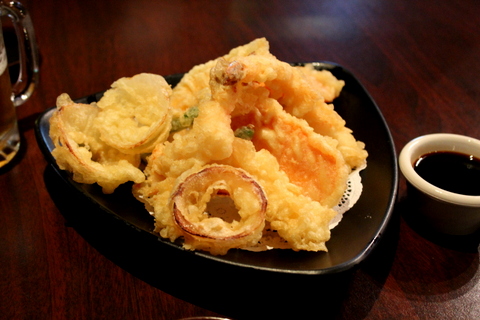 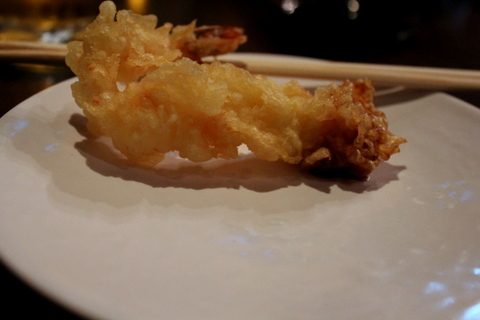 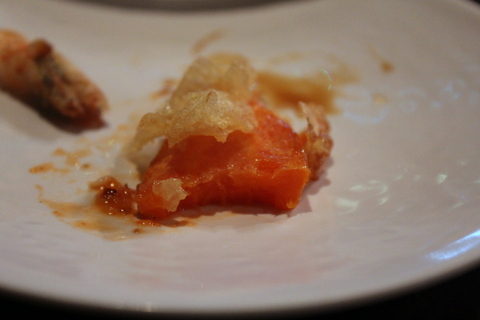 The tempura appetizer is where things started to pick up considerably. The batter was extra crispy - as crispy as any I have ever had - the veggies were fresh and the shrimp was juicy and tender. We devoured the tempura. 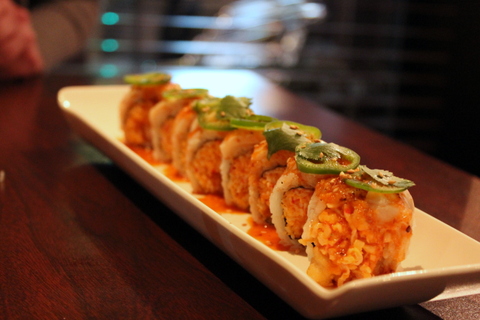 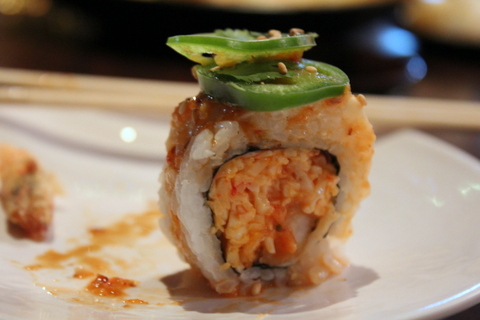 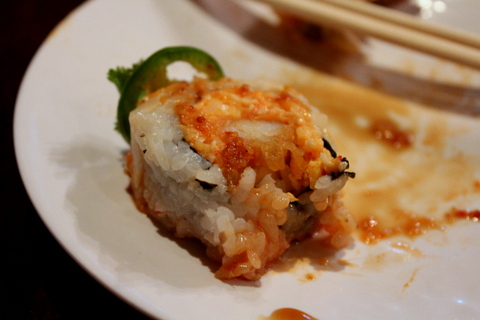 Then came the "Fire Snow": shrimp tempura and spicy crab, with seared white tuna, cilantro and jalapeno. This was one of the five greatest sushi rolls I have ever had. In fact, if you told me right now that I could have any sushi roll of my life placed before me, I would choose this one. Just outstanding. 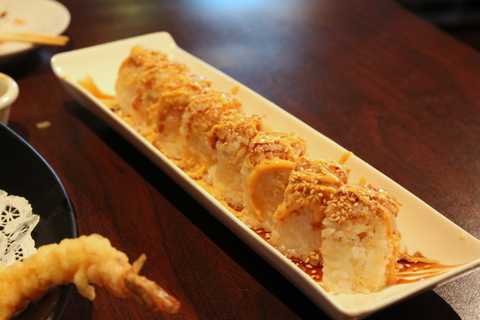 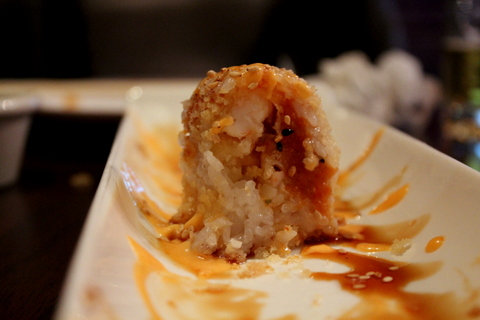 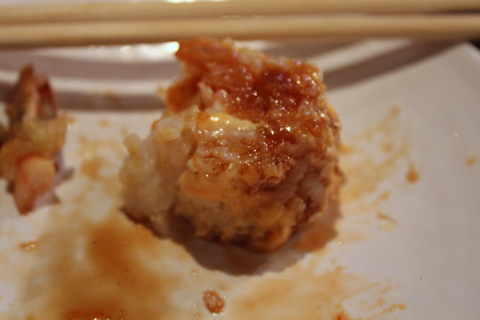 We were pretty full at this point, but still we had ordered the Sweet Volcano: spicy seafood and shrimp tempura inside, with tempura flakes outside and "B.A.D." sauce. We (well, mostly I) still ate all of these, because they were outstanding, too. If I hadn't loved the Fire Snow so much, I probably would be wanting this roll in front of me at the moment instead.

This was an outstanding dinner, one of the best sushi meals I have ever had. Now, we'd had a few drinks before going out to dinner, and I was quite hungry, so I certainly admit that might have colored my perception a little. But in the last week I have recommended BAD Sushi to six different friends. All of them have eaten there and raved about the place, too.

I only have one more week in Pasadena and several more places I want to eat. As I have written, I do not plan to repeat any meals. But if I do, it's going to be BAD Sushi.
Posted by JustinM at 1:49 PM

no pic of the kitty??

I was going to take one before we left and I forgot. Completely my fault.

Are you ever going back to NY?

Yep, one more week. It does feel like I've been here three months, not three weeks.

I just wanted to leave a comment to say how much I enjoy reading your blog.
I would definitely enjoy eating at your restaurant. Or if I had one, I think you could be a very successful manager. Just saying. Have a nice day!

Yeah Justin, I love your restaurant too!!!
Keep up the good work! ;