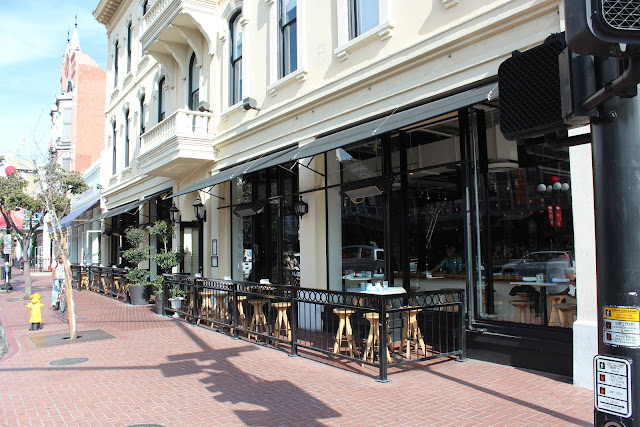 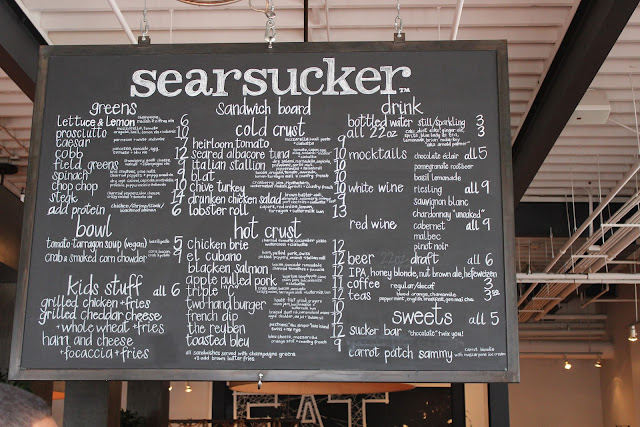 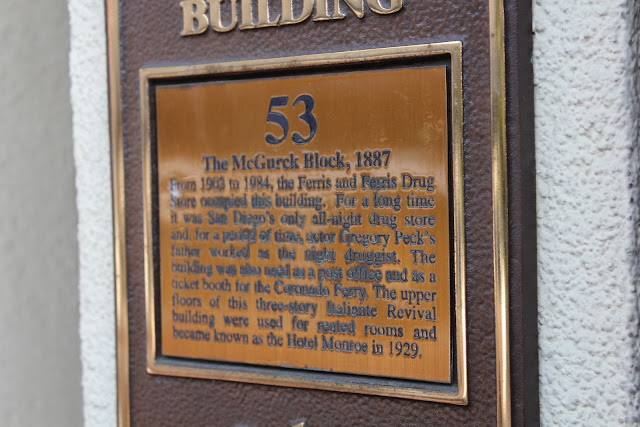 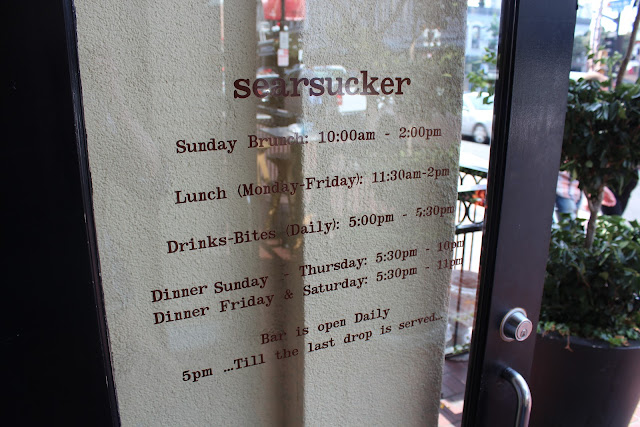 Zach told me the names of two or three restaurants he wanted to try in San Diego; I chose Searsucker in the Gaslamp Quarter. We arrived only a few minutes after they had opened. It looked liked there was a crowd already gathered, although it turned out it was just one large group. They were ordering at the counter just inside the front door. Zach asked an employee if there was full service as well. She said yes so we took a seat at the bar. 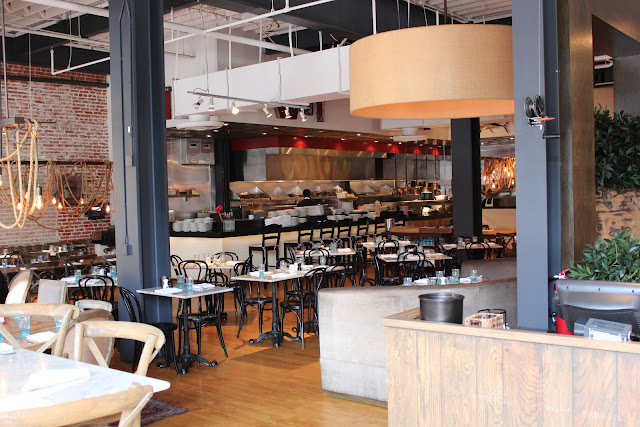 The restaurant is attractive, one large room sectioned off into different areas with various design features. 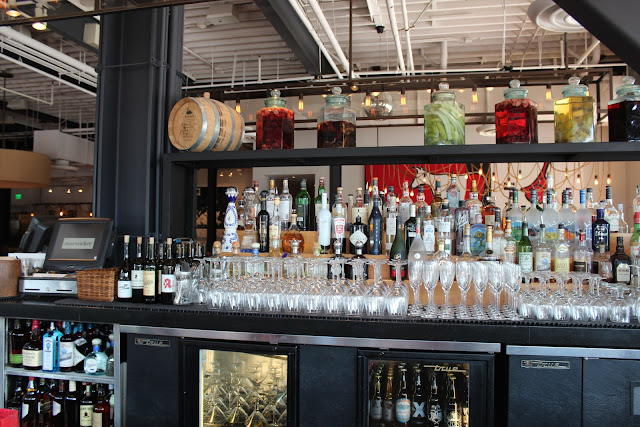 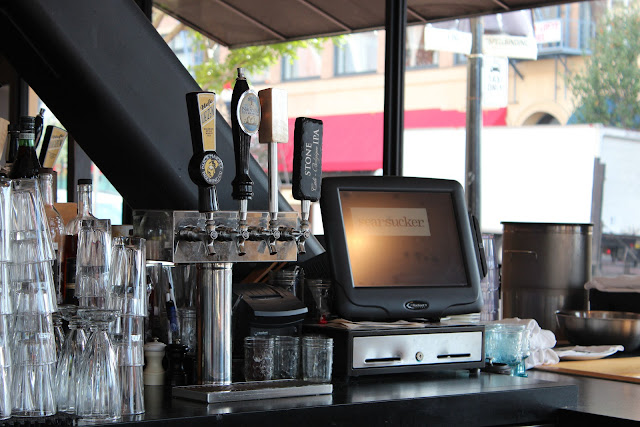 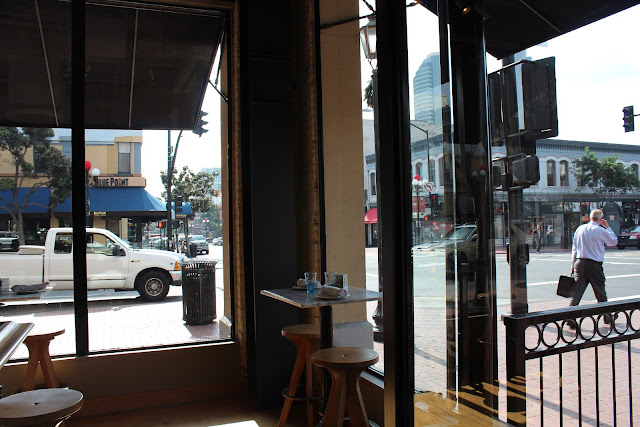 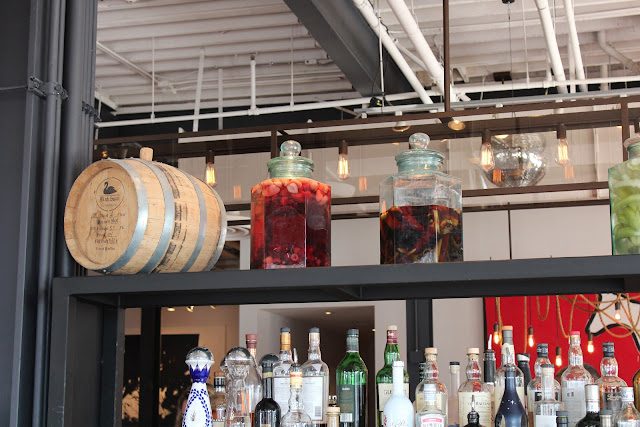 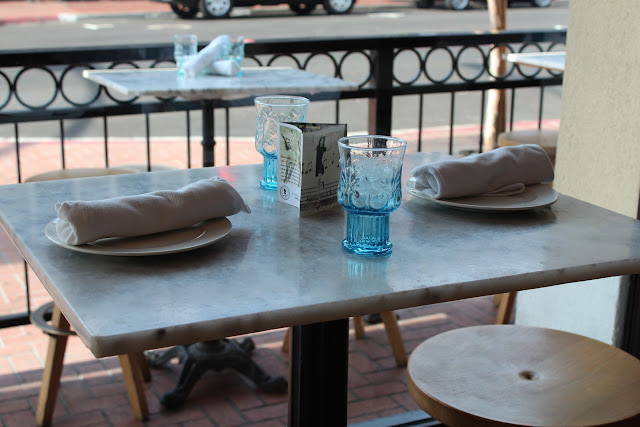 The bar was cool, too, in the corner of the restaurant, looking out at people walking around the neighborhood. 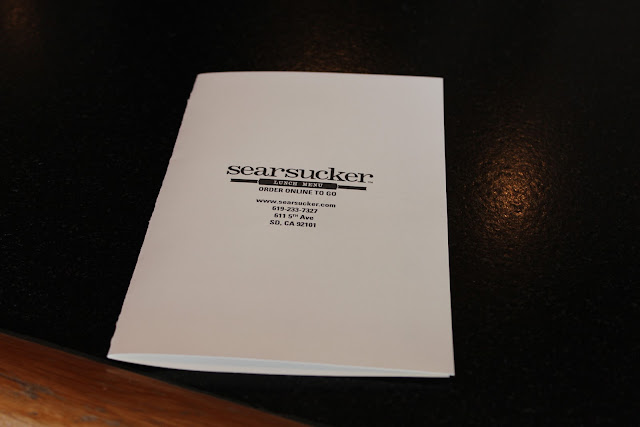 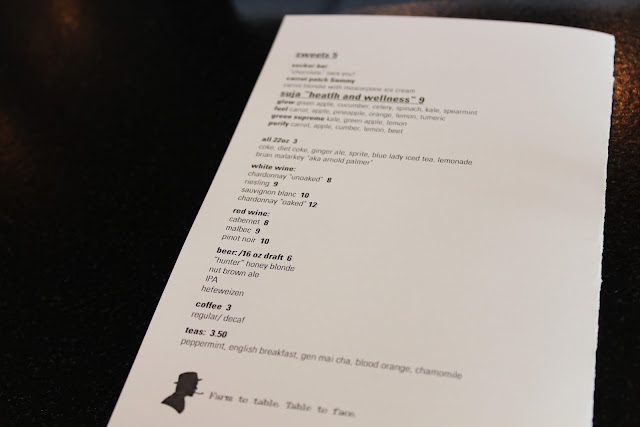 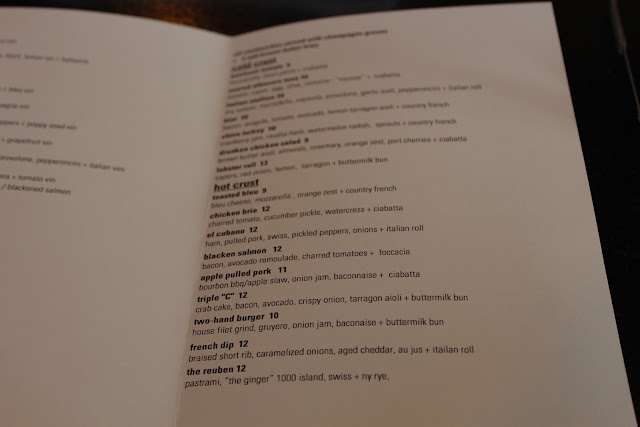 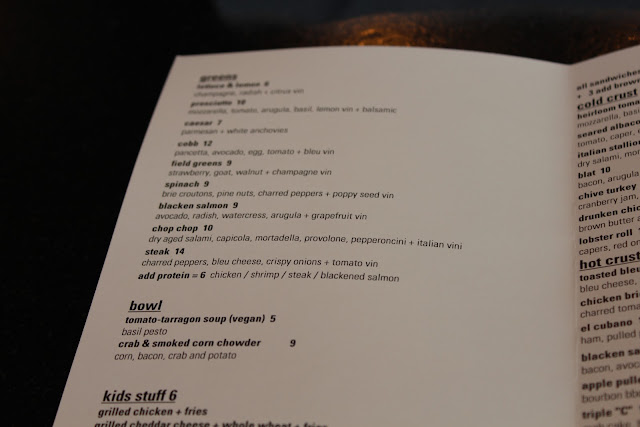 This is one of those menus where I was having a really hard time with the menu. The sandwiches all sounded so good. A Reuben, a pulled pork, a Cuban, a burger, and a French dip? I went back and forth a few times, but the pulled pork kept calling out to me. I mean, it was described this way: "bourbon bbq/apple slaw, onion jam + baconnaise on ciabatta." Does that sound like something you think I would like?

If this had been dinner I would have started with a bowl of the crab & smoked corn chowder, but I didn't have enough of an appetitie yet. 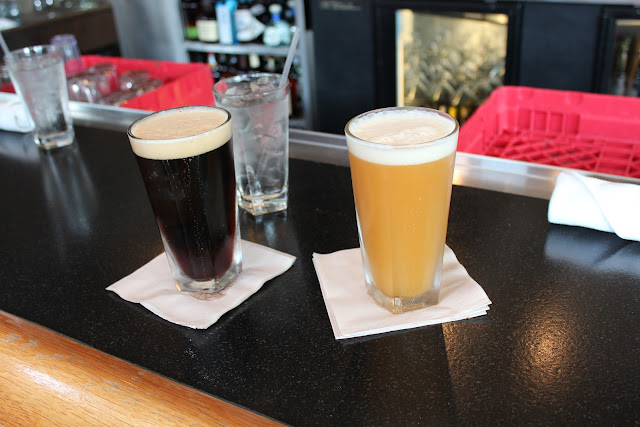 Zach started with a Nut Brown Ale; I had the Black Market Brewing Hefeweizen. 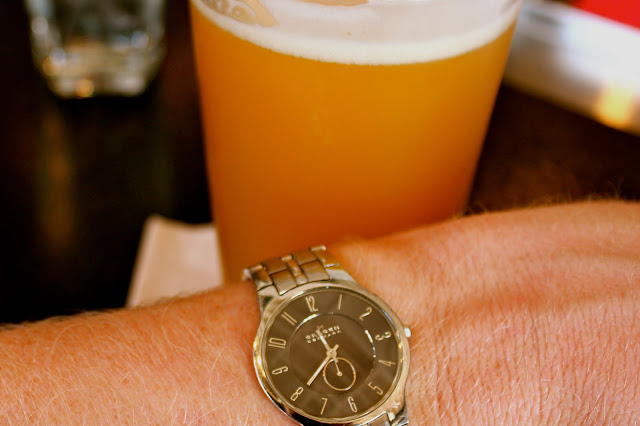 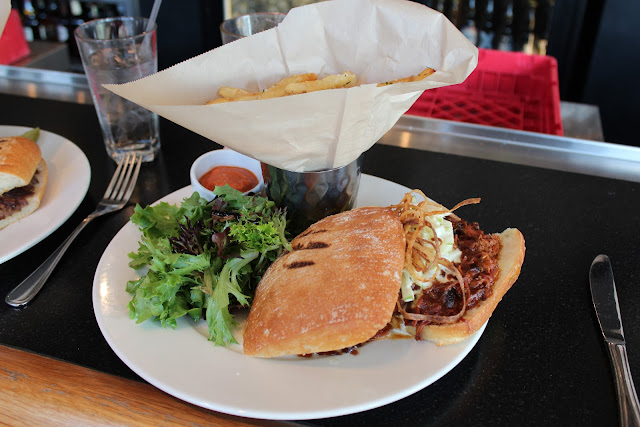 The food looked good when it arrived. 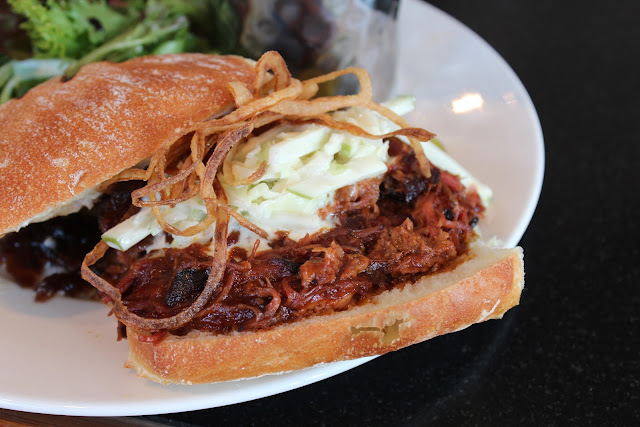 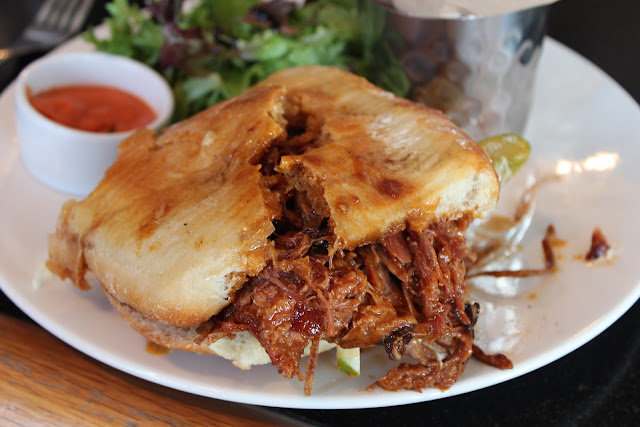 And it was delicious. The pork was tender and the slaw and pickles were great. The only thing that keeps me from calling it a great sandwich is that the whole thing was drenched in sauce. It was good sauce, to be sure, but it was so messy (probably one of the five messiest sandwiches I have ever eaten) that the bread got soaked with sauce to the point that it was breaking apart after the first bite.

Of course, I have never been a fan of ciabatta bread being used in barbecue sandwiches because I don't like the contrast of hard bread with soft 'cue, and this sauce-drenching certainly took care of the bread being too hard. But overall, I would have preferred that this thing had been just a little less messy. 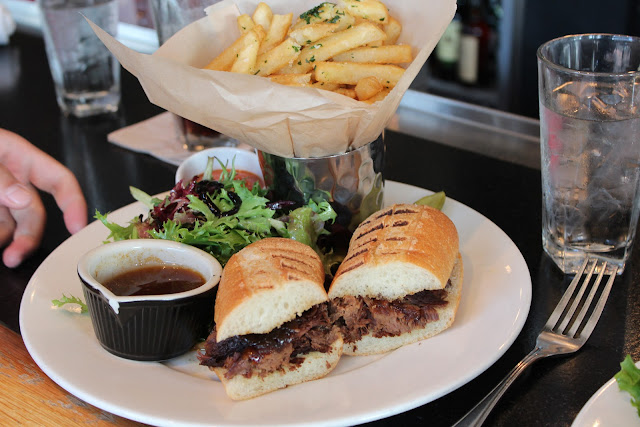 Zach had the short rib French dip. He offered me a bite so that I could write about it, but I had enough to deal with on my plate so I said no thank you. For the record, he really liked his sandwich, too. 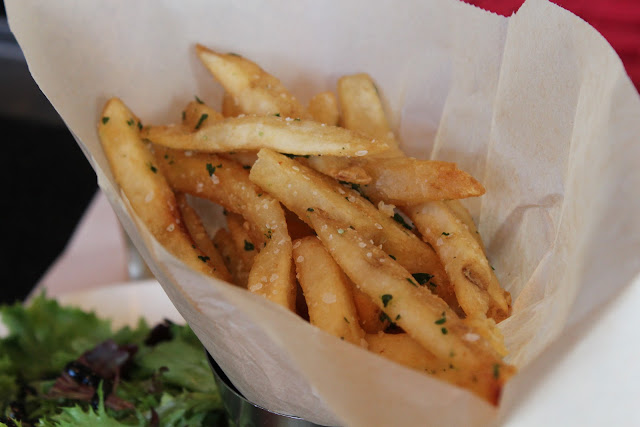 And the fries were delicious, though neither of us could completely finish them.

I definitely liked Searsucker. It's possible (maybe even probable) that if I were able to eat there repeatedly, making my way through the five or six sandwiches that sound so good, I would even say I love the place.
Posted by JustinM at 7:00 AM

i hate when things are oversauced. i always get sauce on the side when possible.

I assumed (correctly for once) that the bourbon bbq sauce would be good. And it definitely was. There was just too much of it.