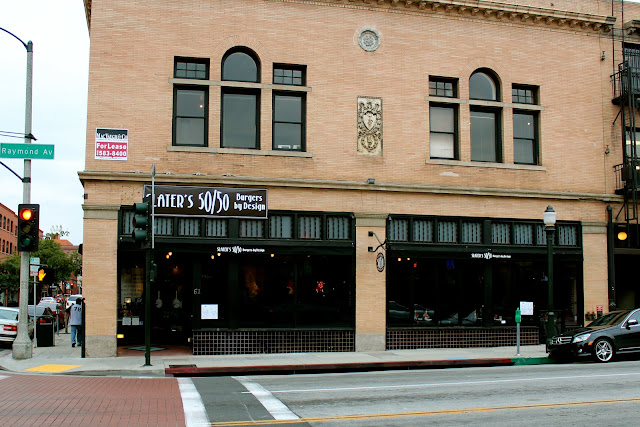 Another of those locations that's been many things over the years, none of which lasted long. A couple years back it was Vive, a place I knew nothing about, other than that an acquaintance took salsa lessons there every once in a while. It was Nonya for a while, though I only visited once, when a guy I knew was DJing. I was 26 and the oldest person in the restaurant. (Except for my friend Dave, who was at the time the CEO of an Inc. 500 company yet for some reason wanted to dance in the strobe light. It was a strange night all around.) And once upon a time this location was a restaurant called Boomerock - where you cooked raw meats yourself on hot stones. (I am not making this up.)

And now it's Slater's 50/50. I had read many blurbs over the last couple of years about the Slater's locations down south, but in truth I didn't know much about it other than the fact that they offered some crazy-sounding burgers, e.g. a "corned beef and Guinness burger" last St. Patrick's Day.

The 50/50, I learned upon visiting, comes from their signature burger blend, a mix of 50% beef and 50% bacon. The other day my friend Carla and I stopped in for lunch. 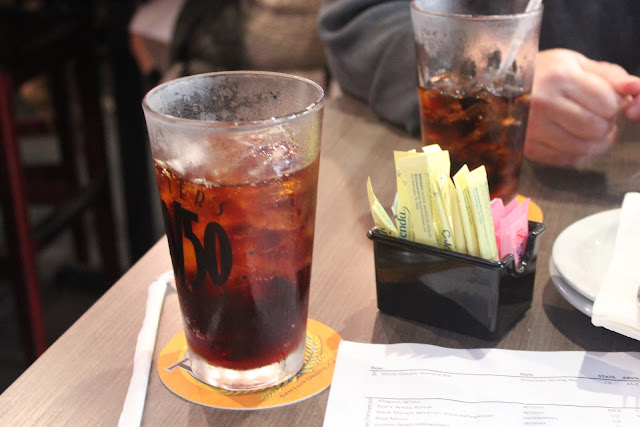 It looked like there were over 100 beers on tap, some of which I love - Abita Purple Haze, Bear Republic Racer 5, Deschutes Black Butte Porter, Sierra Nevada Celebration - but this was only a little after noon and I wanted caffeine. I had an iced tea. 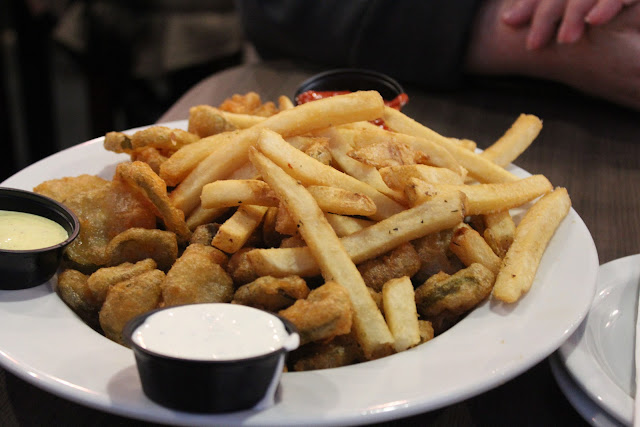 We decided to create an appetizer trio: fried pickles, beer-battered jalapenos, and fries. The beer-battered jalapenos were by far my favorite of the bunch. Crispy outside, spicy inside. The pickles themselves were decent, but the batter was very greasy and barely adhered. The fries sucked; they are the same fries you find at truck stops across the country. 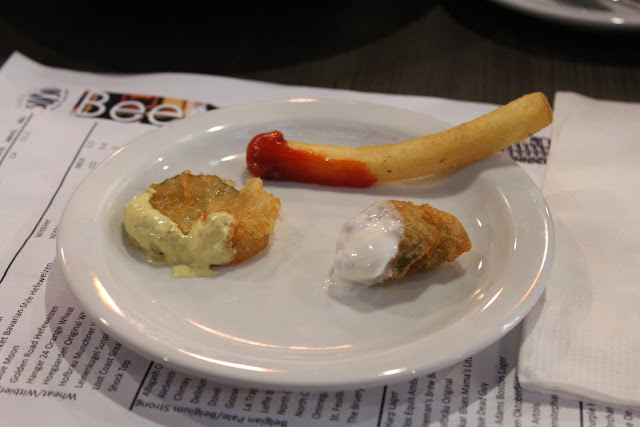 The good news? The sauces that accompanied the appetizers were very, very good. The bacon ketchup served next to the fries was not some sweet tomato goop with a slight taste of bacon; this had real bacon in it, and lots of it. It was the best bacon ketchup I have ever had, which is a larger sample size than you might imagine.

The cilantro-lime sour cream meant for the jalapeños was likewise delicious. I have never really used sour cream as a dip, I prefer it (when I use it) mixed in with other things. But I had no problem dipping into this.

And my favorite of the bunch was the "original mustard sauce," advertised as accompanying the fried pickles but really going wonderfully with all the items. This was one of the best mustard sauces I have had in a long time. 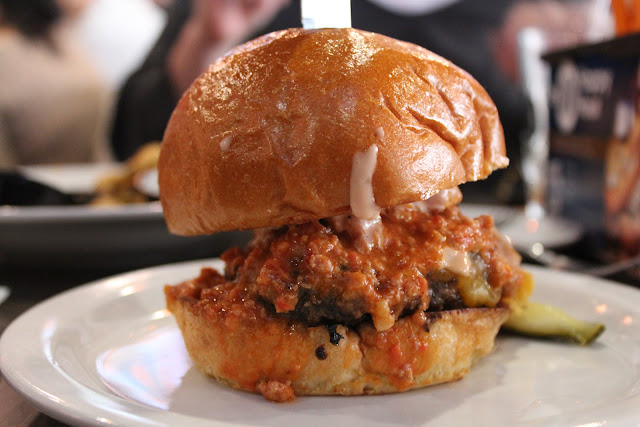 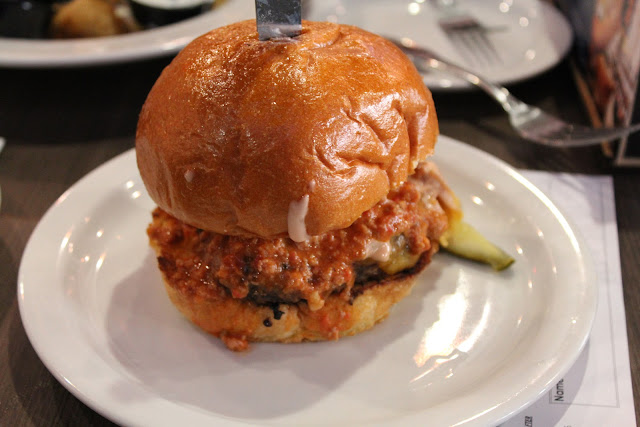 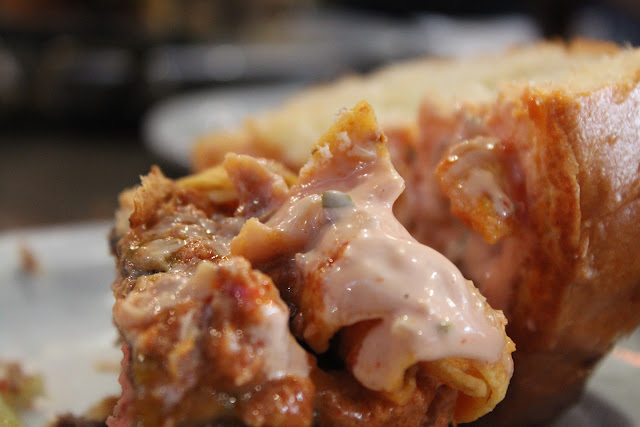 I ordered the Fritos Crunch Burger: a beef patty topped with cheese, Fritos, chili and 1000 Island dressing. You have your choice of 1/3 pound, 2/3 pound, and full one-pound beef patties which they claim are the weight after cooking. I opted for the 2/3 pounder.

The bun was fantastic, soft and sweet. But that's the only part I really liked. The toppings were meager: I was hoping that something with "Fritos Crunch" in the title would have more than the tiny scattering of Fritos I counted. There was so little chili that I could not even detect the taste of it. And it was overcooked: 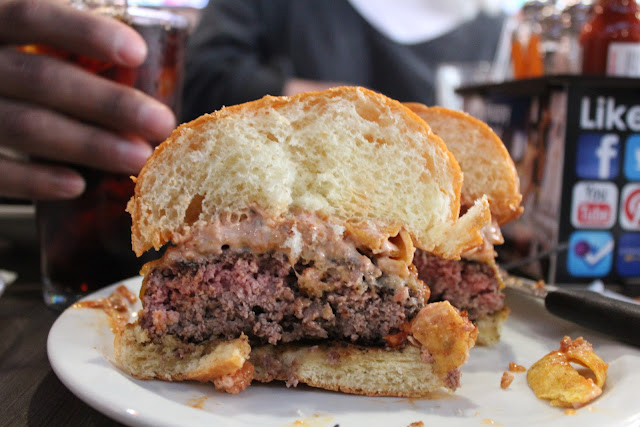 I ordered it medium-rare and this is what it looked like - between medium and medium well.

But at least it wasn't as overcooked as Carla's: 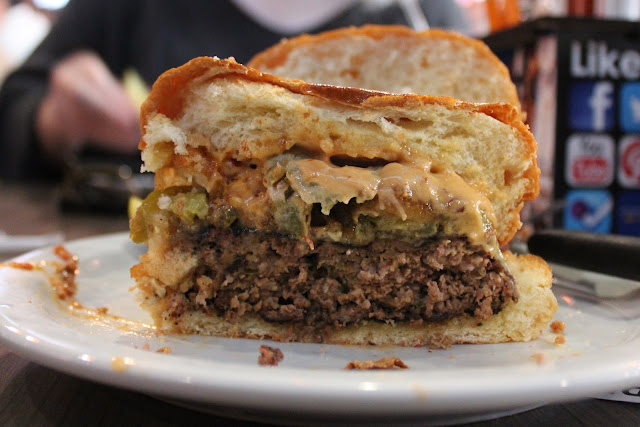 Her burger, also ordered medium-rare, did not have any touch of pink to it.

Now, after a few minutes a manager came by and asked how the burgers were.

"Pretty good," I said, "but very overcooked. He apologized and immediately asked if we wanted them remade. I give him credit for that. But we had waited half an hour to receive these and I certainly did not want to wait any longer so I said no thanks.

And it's not like I was lying to him: my burger was pretty good. The beef was tasty; it wasn't dried-out despite being overcooked. The toppings were good... there just weren't enough of them. This was not bad by any means. It just wasn't anything special, and I had thought there was a chance it would be.

Carla's burger, of which she gave me almost a quarter, was more of a letdown. Named "The Flamin' Hot," the burger was advertised as coming with beer-battered jalapenos, fire roasted green chilis, pepper jack cheese and chipotle adobo sauce... all on a patty with habaneros mixed in. After she'd ordered it, the waitress started telling tales of previous customers who had ordered it and then found it so spicy that they required multiple glasses of milk to eradicate the pain. We got a little nervous.

Well, you can probably guess what's coming: neither of us found it to be the least bit spicy. Carla wondered aloud if perhaps they had given her a patty made for someone else, like maybe they had taken a well-done patty without habaneros and placed it on her burger. So we sawed off a little bit of the patty and tried it by itself. It did indeed have peppers in it... they just weren't very hot. Either they weren't habanero or it was some kind of diluted habanero powder. (Actually, now that I think about it, the menu did not claim that they were habaneros... that was something the waitress told us. Maybe she confused the kind of peppers Slater's uses?)

The service was two-fold. When we sat down, the waitress was upon us quickly, we received our drinks quickly, a manager came by to say hi, and our appetizers came out in just a few minutes. But then things took a turn for the worse: our entrees did not come out for half an hour, as I mentioned, and we did not see a server again after that. We finished our food and sat there with empty plates in front of us for 15 minutes - despite the server repeatedly walking by our table - before a busboy finally noticed that we were completely done. We sat there for another eight minutes, without a thing on our table, before we were finally able to get our check.

Even if I still lived in Pasadena, I said I did not think it would be worth visiting Slater's again for a meal. There are still some very good independent restaurants in Old Town; it hasn't been completely taken over by chains, though that seems to be the direction of things. But I also announced that I wouldn't mind returning to Slater's one day for a beer at the bar. I would not have to wait long. 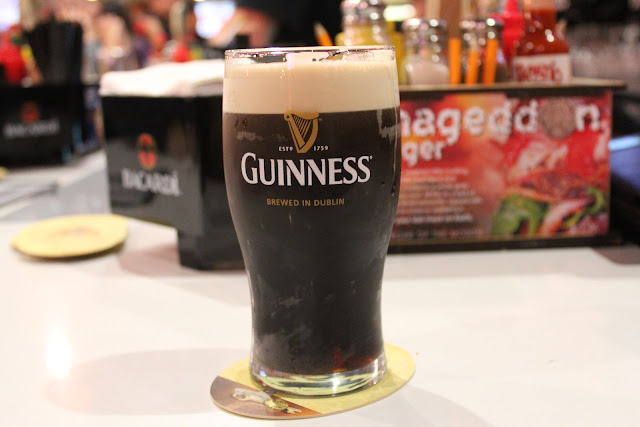 Two nights later I was walking up to the Gold Line when I spotted my friends Ed and Alan at the bar. I stopped in to join them for a pint of Guinness. This was 10 o'clock on a Wednesday and the place was packed. There were five bartenders working, so it was quite efficient, but not really my style. Once upon a time I loved a loud bar with lots of TVs showing sports - and this is an outstanding locations for doing that - but these days I prefer a place where you can chat with friends or the bartender. My friends and I had to yell at each other and the bartenders did not seem at all interested in us (though I admit it's possible they were just really busy).

Overall I was pretty underwhelmed by Slater's 50/50. Nothing stood out except the specialty sauces for our appetizers. I am not alone in my opinion; I received text messages from two friends shortly after my visit, both who experienced the place on their own and both who had similar opinions:

I like the concept of Slater's 50/50: quality burgers with interesting toppings and more than one hundred beers on tap. But I have a suspicion that the concept is the best thing about the place.
Posted by JustinM at 10:00 AM

I have been looking forward to the advent of this place for a long time -since you told me what the 50/50 actually meant. Now I can't wait to go anywhere but there. It really sounds dreadfully disappointing.

I hope to make it to Slaters 50/50 some day! The sauces sounds great and I like the sound of that bun.