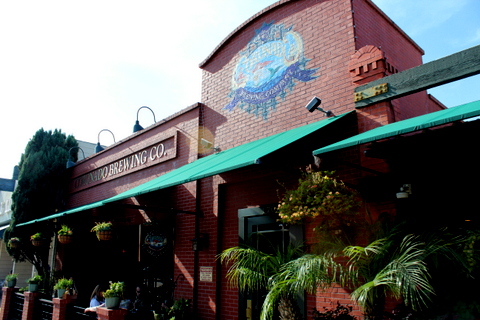 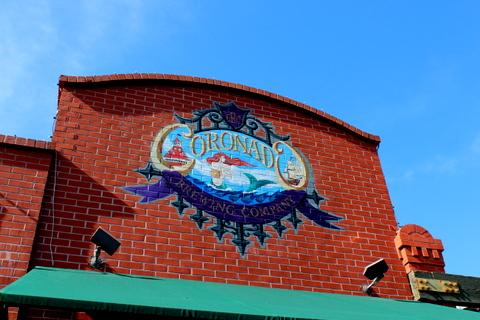 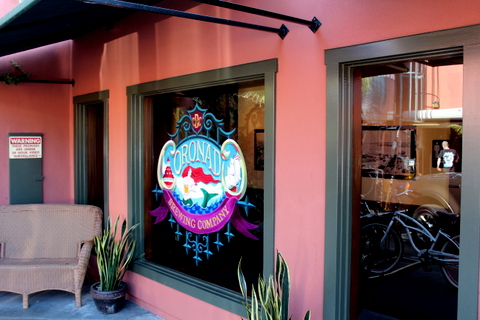 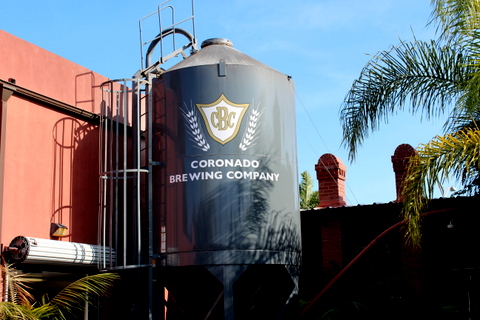 Last Christmas I had planned to head down to San Diego County and hang out with my friend Zach - one of my best friends from high school - for a few days. But a veterinary emergency came up and I had to stay close to home. (Elizabeth was out of town.) Then I tried to sneak in the getaway right before we moved to Brooklyn, but I just couldn't find the time. So while being back in Pasadena for a month-long vacation, I made sure I did the trip this time.

I took the train down to San Diego early Monday morning and met up with Zach and his girlfriend, who graciously agreed to drive us around. Our first stop was Coronado Island, where it was 72 degrees and sunny. We decided on lunch at the Coronado Brewing Company. 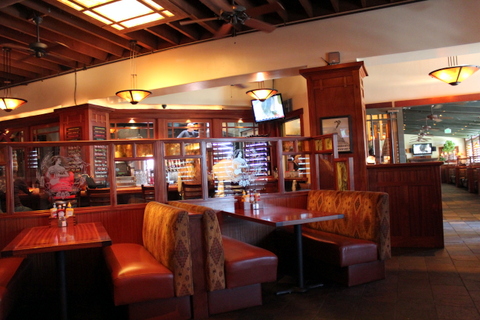 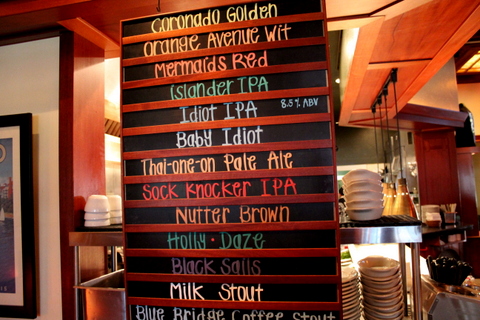 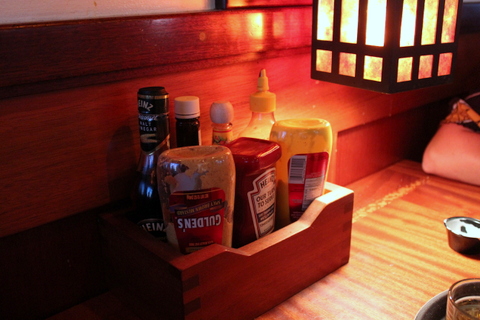 It was dark inside, almost elegant. 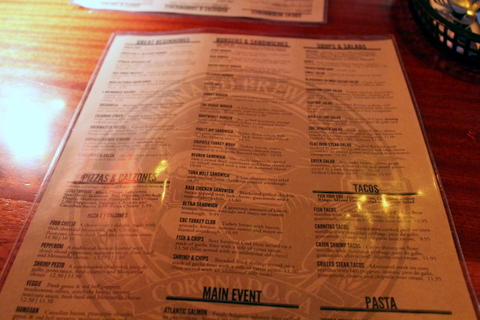 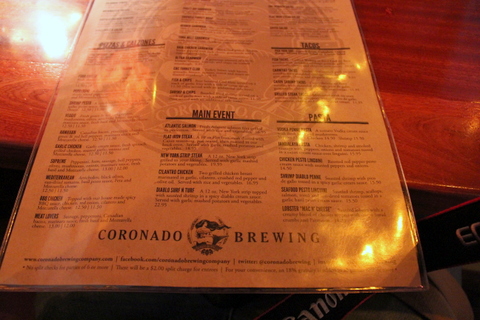 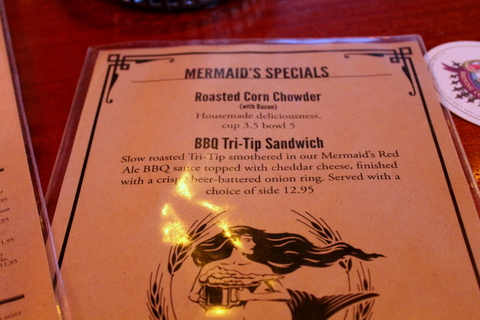 Nothing too surprising on the menu. It's been about a decade since I've been a regular at brewpubs; I stopped going because with very few exceptions I was consistently disappointed in the quality of the food. BJ's, Rock Bottom, Old Chicago, The Ram, McMenamins... I just got tired of it.

This menu was what I was expecting: appetizers, pizza, burgers & sandwiches, and a few other things thrown in for good measure.

While I was browsing the menu, Zach returned from the restroom.

"You gotta check out the signs in there," he said. So I did. 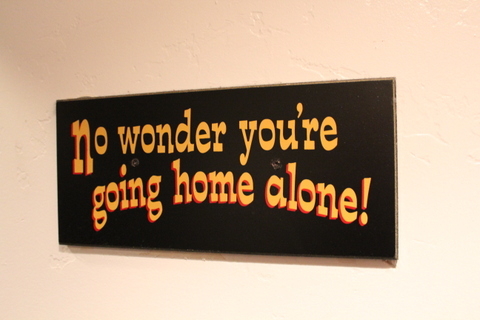 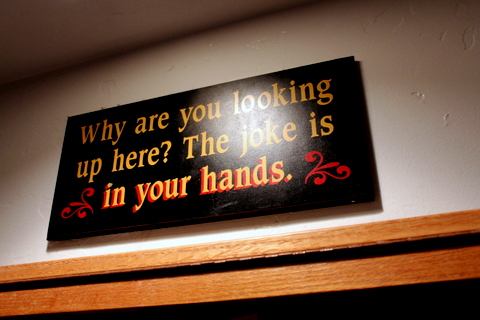 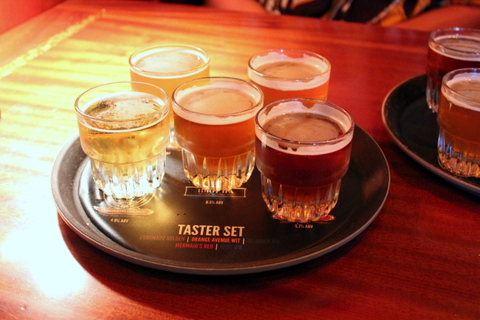 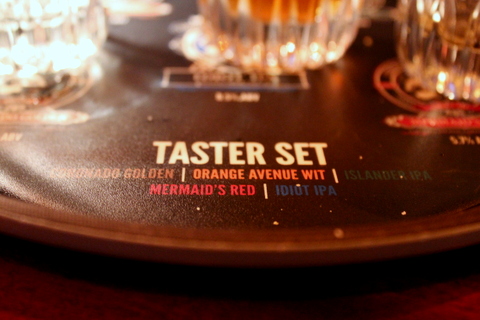 We started with a taster set of beers: Coronado Golden, Orange Avenue Wit, Islander IPA, Mermaid's Red, and Idiot IPA. The last one was the only one I did not care for, a extra-hoppy, 8.5% abv beer that had too much going on for my taste.

We finished the tasters and selected some more. 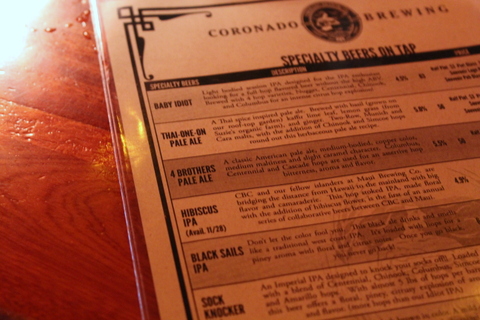 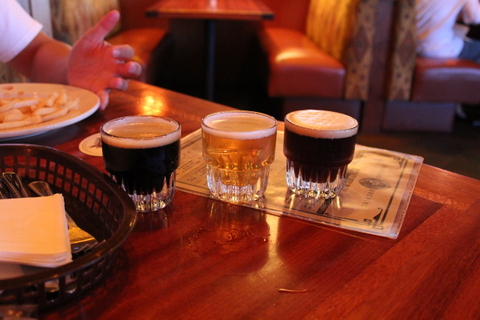 We chose three: Thai-One-On Pale Ale, Nutter Brown, and Milk Stout. The latter two were good but not spectacular representations of their style. The Thai-One-On, however, was like no beer I have ever tried. Kaffir lime and lemongrass were not only noticeable at first taste, they were practically punching you in the mouth. I have had Thai soups that were not this aggressively flavored. I could not tell if I loved or hated this beer. I suppose it would be a nice complement to many dishes, but I can't imagine drinking more than a taster of it. 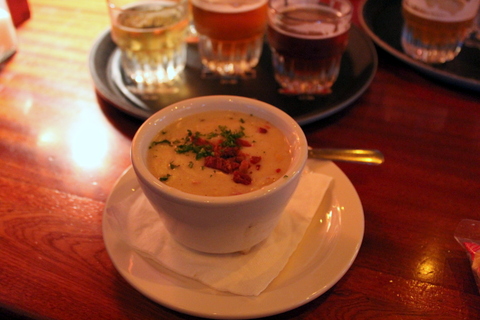 One of the specials of the day was a corn chowder with bacon, and Zach and I each got a cup of it. I liked it. I can't really be any more effusive than that, but still, I wished I'd ordered a bowl instead of a cup. 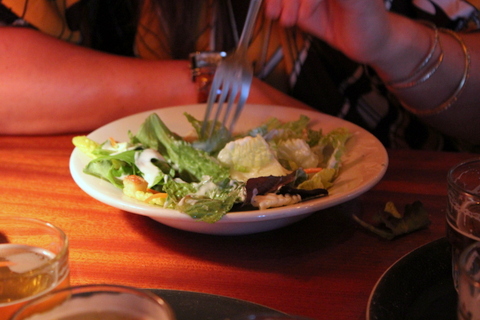 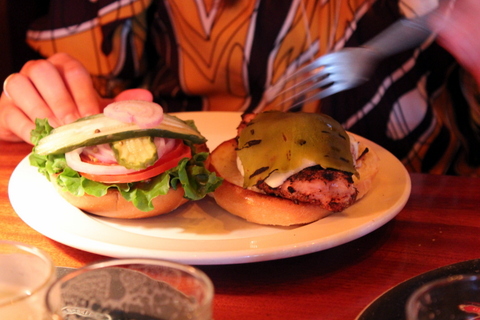 Jenna started with a house salad and had the Baja Chicken Sandwich: a grilled chicken breast with guacamole, cheese, and a roasted green chile. She liked them both. 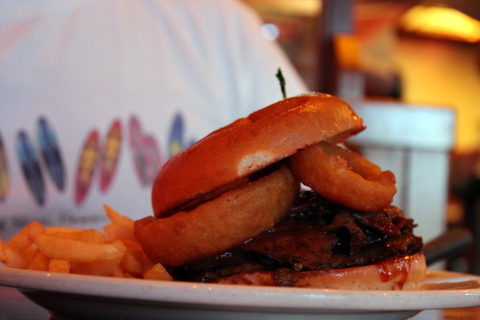 Zach had the sandwich special of the day - tri tip, with beer-battered onion rings and barbecue sauce. It looked good to me, and he definitely enjoyed it. 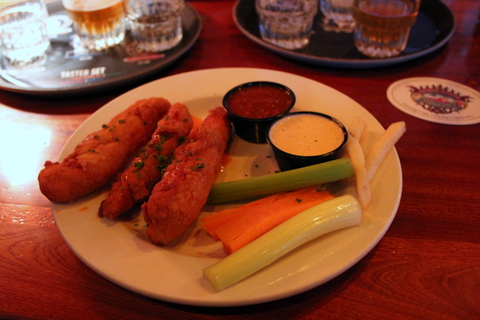 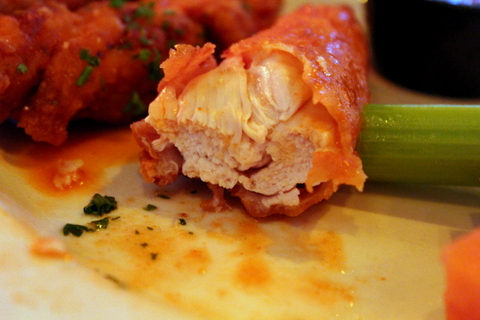 I opted to just get an appetizer to complement my soup. I chose the three-piece chicken strips, with "hot" sauce, the middle of the three levels of hotness. I inquired of the server about the hottest sauce, the "volcano." She told me that it's really hot and that most people who order it wish they hadn't. I was waffling, trying to decide if I should order that, when she said "I tell you what, get the 'hot' version and I'll bring you a side of the 'volcano.'"

This was a good call on her part. The hotter of the sauces was blistering. I liked applying small amounts of it to each strip, but if they'd been tossed in this sauce it probably would have been too much. The chicken, on the other hand, wasn't very good. It had been overcooked. It wasn't inedible or anything, it just was too chewy.

But, as I wrote, that's why I stopped eating at brewpubs with any frequency. This is the kind of food I have to come to expect. Nothing bad, just nothing very good. Food to serve the main purpose of soaking up the alcohol perhaps. (Although I admit I didn't really make an adventuresome order; Zach and Jenna were certainly more pleased with their food than I was.)

Still, I would put Coronado Brewing ahead of those chains I mentioned earlier. I liked almost all of the beers, the service was great, and the atmosphere pleasant. It was hard to complain too much on a 72-degree late November day.
Posted by JustinM at 11:33 AM

in my neck of the woods. I haven't been to the restaurant yet, but the island is quite nice.

did you stop anywhere else in SD?

Those bathroom signs do seem like a poor business decision, unless they're going for a frat house atmosphere. The tri-tip looks tasty, though!