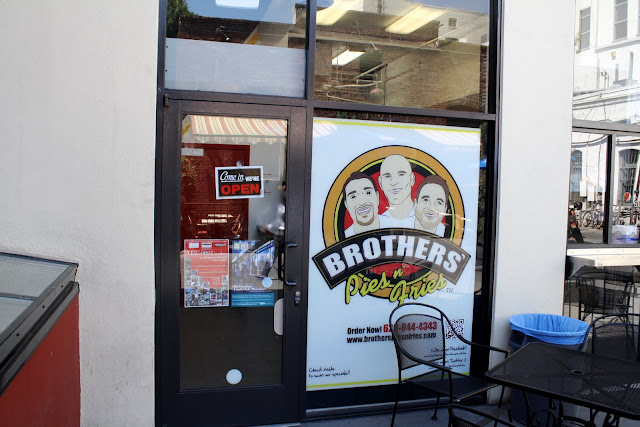 Here's a first: I'm going to write about a place for the first time and two meals separated by more than a year and a half. I'll explain.

Once upon a time, I loved eating pizza in Old Town. I have mentioned more than once that my favorite pizza in town - and probably in all of California - was the Mt. Etna at La Fornaretta, now the Scientology reading room. There was a pizza with prosciutto and french fries (much better than it sounds) at Breadcrumbs, which only lasted a few months and is now Umami Burger, after being many, many restaurants over the years. Bada Bing always had reliable pizza-by-the-slice. It's Pinkberry now. The Kitchen Italian Cafe was very good, too, though I have not been there in more than four years, as the quality declined slightly and the service declined greatly.

These days, the only place I get a slice in OT is at a bar that makes decent bar pizza. It's just fine, but Old Town is definitely not the pizza destination I once regarded it as.

In the summer of 2011, my friend Dave and I grabbed a burger at Jake's. Afterwards we noticed a sign on a small storefront down the alley, proclaiming "Brother's Pies and Fries, Opening Soon."

"That sounds like an East Coast place," Dave said. I hoped that was true.

A week or two later, I read that Brother's was open, and Elizabeth and I stopped in for a bite. It was obvious they had not been ready to open. We ordered two slices of pizza, two small drinks, and one order of their second-smallest size of fries. I was slightly surprised when the total for those items was more than twenty dollars, but I had no idea what they were going to be. I literally had no preconceptions about the food. Maybe twenty bucks and change would actually be a good deal for what we were about to get. 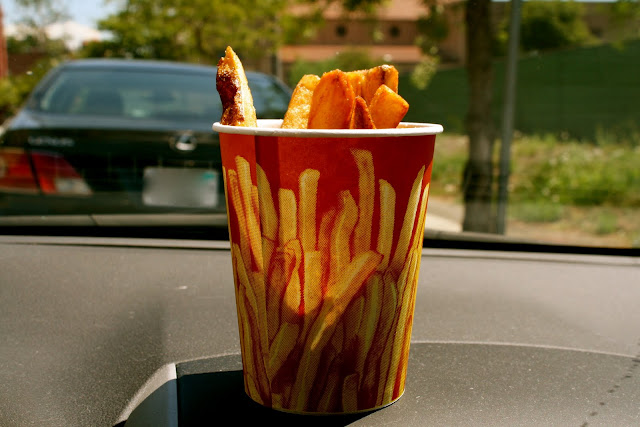 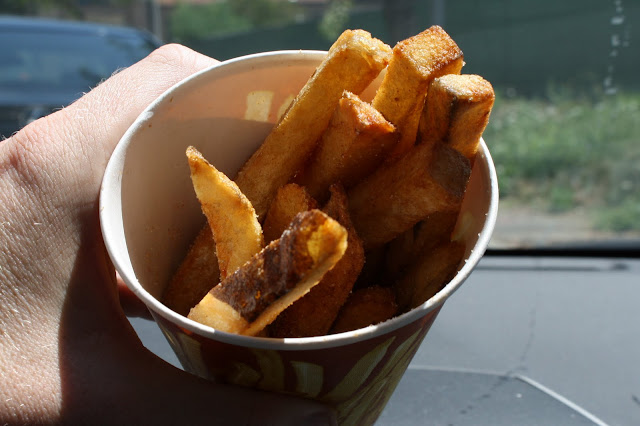 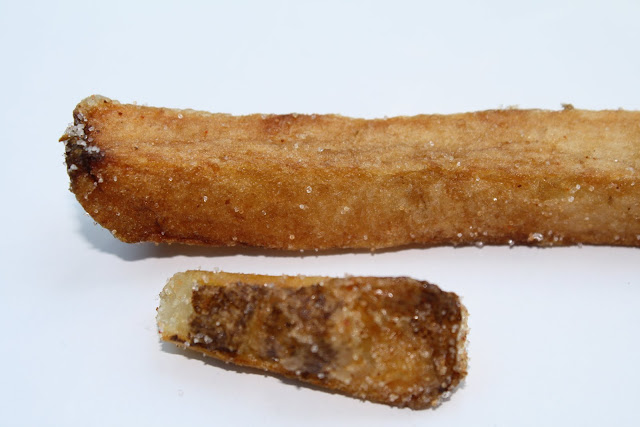 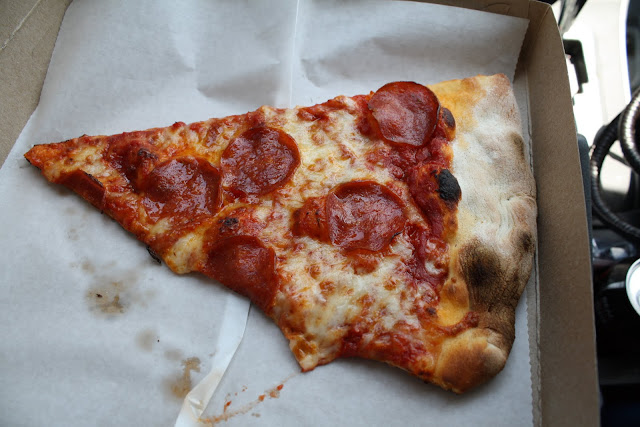 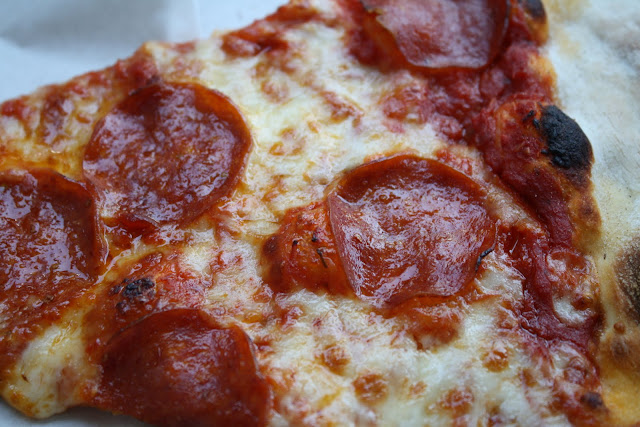 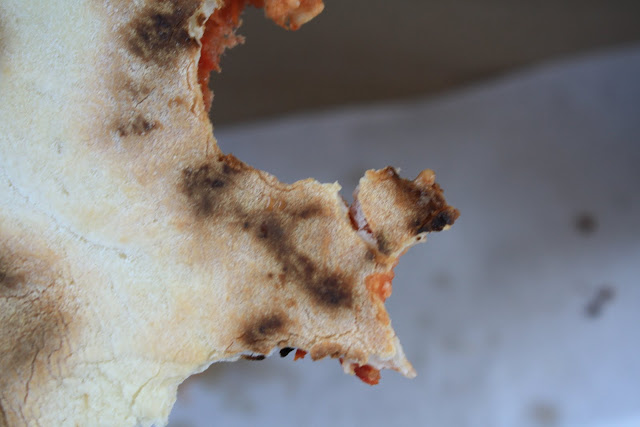 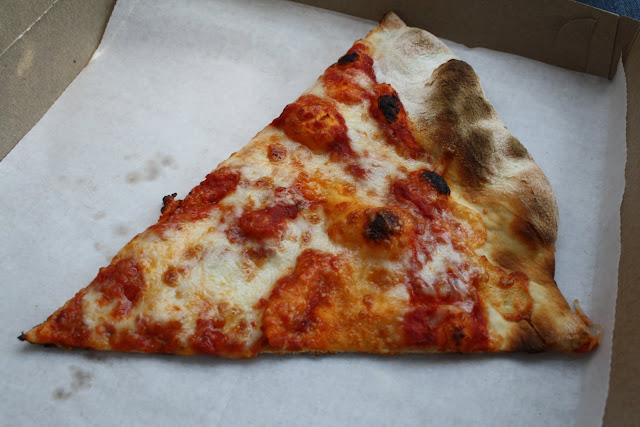 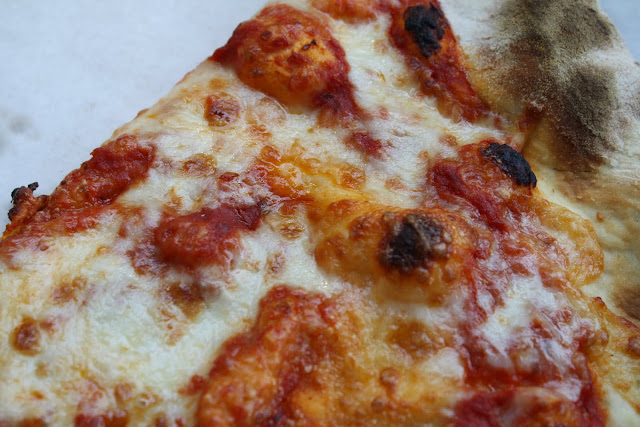 The fries were terrible. The cup - which cost six dollars - was barely half-full, and the potatoes were room temperature and mealy. (According to their website, the price has been lowered to $4.50 now, though that still seems high for a half-full cup. We did not remove a single fry before taking those picture.) My slice of pepperoni pizza was actually decent. Not very good, but decent. Elizabeth did not like her slice of cheese at all; she wouldn't finish it so I did, and it was certainly not as good as my pepperoni.

But I never wrote about the place. As I mentioned, they were brand new and obviously they should not have been open. True, they had no problem taking my money in exchange for their product, but still. I really wanted the place to succeed. I remember when Old Town wasn't just an outdoor mall full of chains, and I loved the idea that a mom-and-pop pizza joint was opening in town. I don't pretend that me giving a bad review of the place to my 20-25 readers would affect their bottom line in the slightest, but I still didn't want to do it. So I just let it go.

Then a couple of weeks ago I was in Old Town, craving some al pastor tacos. I headed to King Taco. They had closed early at 3PM, something about "holiday hours." I had not eaten a thing all day and was in need of something quickly. I decided to give Brother's another try, figuring that after a year and a half, if they were still open they had probably improved. 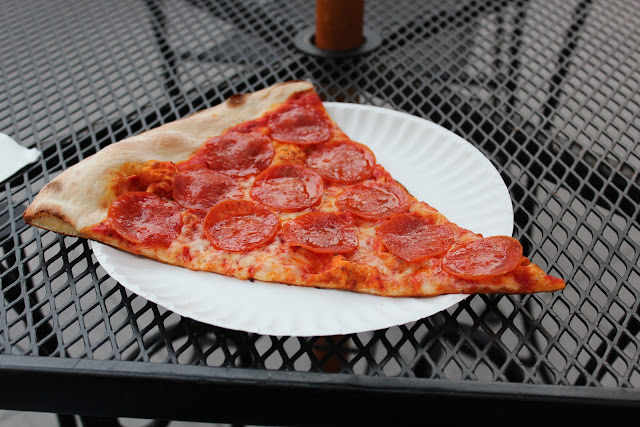 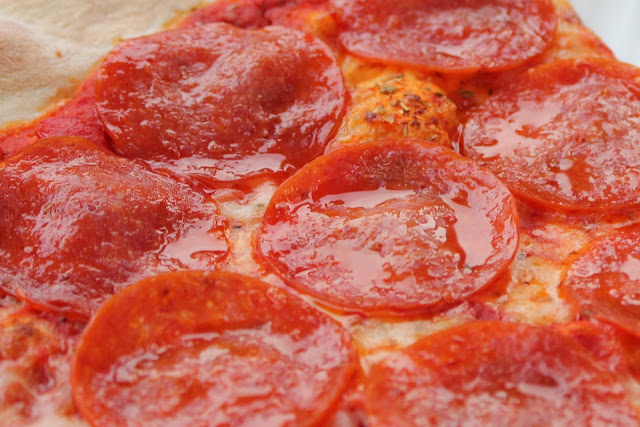 Well, this is what I got. $4.61, barely any cheese, ultra-greasy pepperoni. Res ipsa loquitor. I don't mind telling you about that first visit now, because nothing appears to have changed with the place.

Brother's is open until 3 AM on Fridays and Saturdays, and I'm guessing that's the time to go. (I'm also guessing that people aren't the best judge of quality or thinking about cost at that hour, if you know what I mean.) There was a time in my life when I might actually be out at 2 or 3 AM and in need of food, and in those days I imagine I would have been a fan of Brother's. But this was a sober, weekday afternoon.

There will not be a third trip for me, but I'd be lying if I said I still didn't want the place to succeed. On both occasions the employees were very friendly. It's not really bad pizza - there is another place a couple blocks away serving pizza by the slice that is truly bad pizza - it's just not very good. But if a person has never had great, East Coast-style pizza, I could see how they might be confused into thinking that this is it. So if other people like this pizza and don't mind shelling out more than four and a half bucks for a slice, great.

If I had paid that money and been handed a slice like that I think I might have thrown it at someone.

I have not been there in a long time, long before there was a blog. I remember liking it, but I would never consider a pizza the best if it's thick crust.

Mama's Brick Oven is pretty damn good, and for delivery pizza it's fantastic. I like Tarantino's for dine-in or pick-up quite a lot too. I've never had a real knock-my-socks-off pizza anywhere around Pasadena though.

True, everyone has thier likes and dislikes. I personally love Sicilian style pizza. Petrillo's also has the classic antipasto and Italian dishes alike.

SuperLarge: Definitely. Mamma's & Tarantino's are better than anything in OT. I wonder if you ever got to try the Breadcrumbs pizzas - I think you would have really liked them. I also loved Bono Corso's pizza, but I think that closed 9 years ago.

Anon: I like thick pizza, be it Sicilian or Chicago style, but I always feel like I am eating more than pizza, like it's a lasagna. I wish I could remember more about Petrillo's though. If I were still in Pasadena I would be going there tonight.

Just wanted to let you know I stumbled across your blog a couple of months ago and have been reading it regularly ever since. Great job!