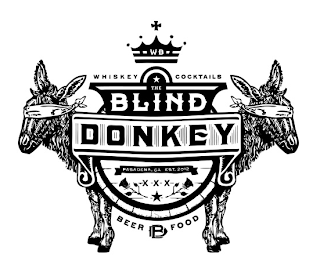 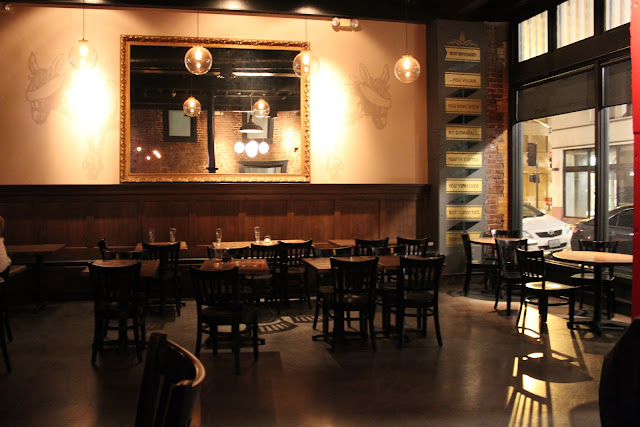 Would it surprise you if I were to write that this location on Union has been many things over the years? Probably not, right? Probably not.

It was Dish a couple years back, a restaurant I wanted to like - the food was pretty good - but just couldn't because of the cold vibe. (In addition to other things, one night the owner personally greeted every single customer at the bar except Elizabeth and me, which did not seem possible without it being intentional.) It was Cafe Brenart, a restaurant that fancied itself an art gallery as well. It was not for me, though I admit perhaps that says more about me than the place. It was Cafe Atlantic, where a few years ago I had the second-best Cuban sandwich of my life on one occasion; on another I had the single worst Cuban meal of my life.

Now it is The Blind Donkey, from the creators of several other bars in Southern California. I visited it three or four times over my stay in Pasadena. Their specialty is whiskey but I have not ordered a whiskey in almost 9 years and I did not on any of these occasions. But the list looked pretty nice. 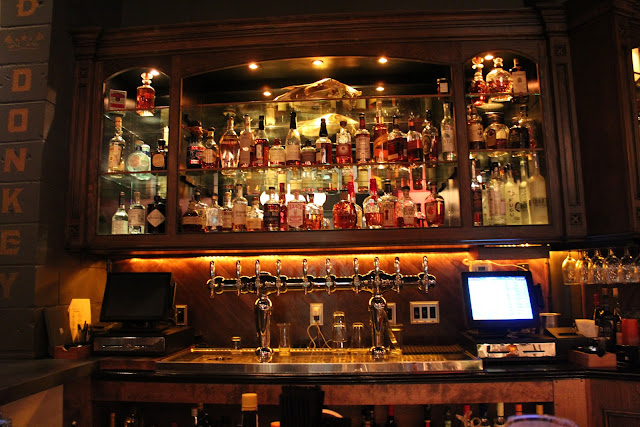 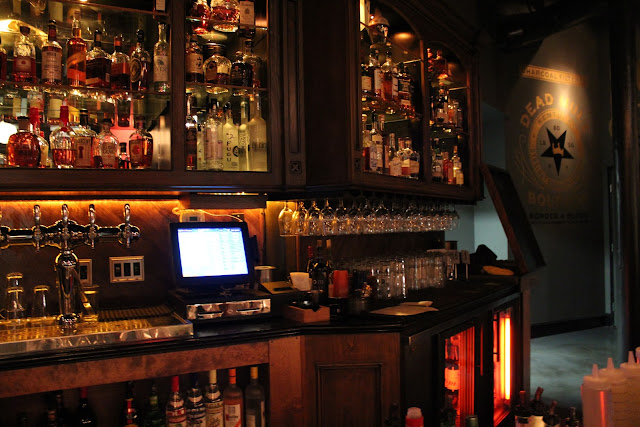 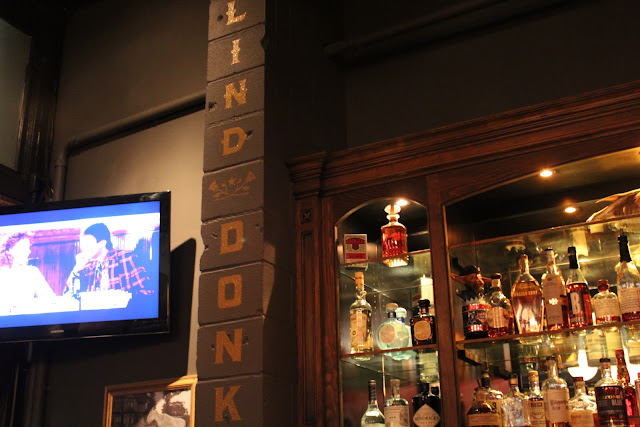 It looks great inside, no question about that. 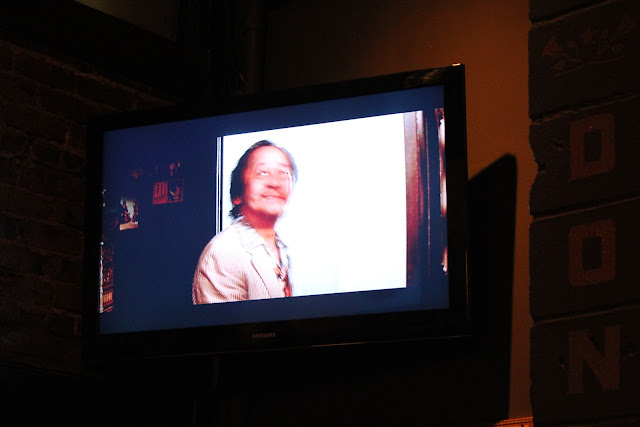 Q: Is there anything better than a bar that shows Big Trouble in Little China?

A: Only a bar that shows Captain Ron or Hudson Hawk.

(I once revealed to Elizabeth that I had a Captain Ron movie poster on my bedroom wall as recently as the age of 24. She shook her head in a very disapproving way.) 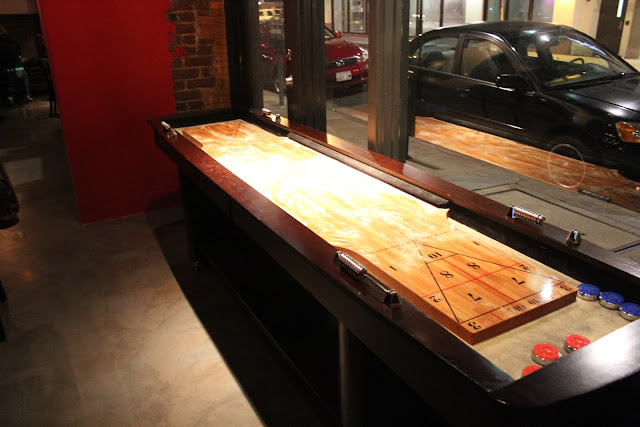 On this occasion, Bryce and I sat in the corner of the bar, by the table shuffleboard. 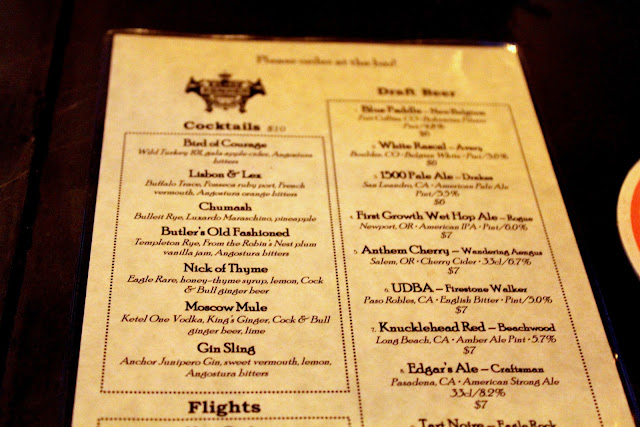 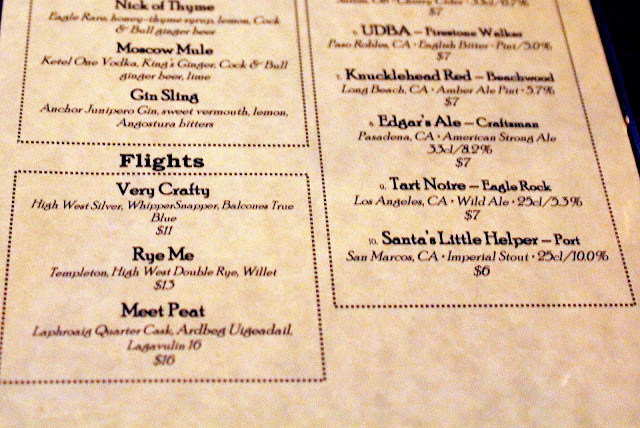 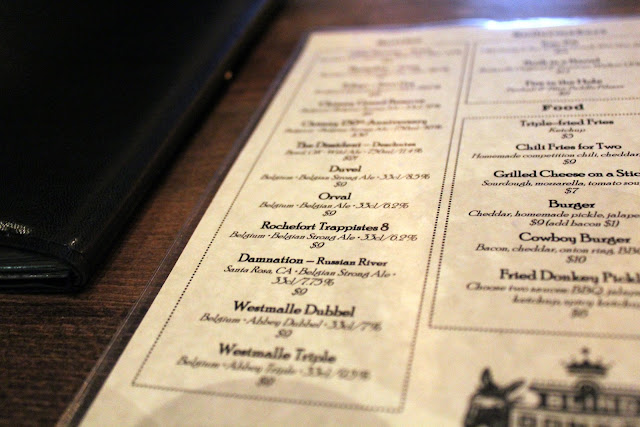 Something jumped out at me right away.

"You have Blue Paddle on tap?" I asked the girl behind the bar, who has been a friend of mine for many years. "This isn't a joke?"

"Yep," she said, "we're the only ones in Southern California who have it."

I believed her. I have never seen it on tap in Southern California; I don't believe I have ever seen it in bottles here. From New Belgium - the makers of Sunshine Wheat, my favorite beer in America - Blue Paddle is a Czech-style pilsner with a slightly toasted flavor. 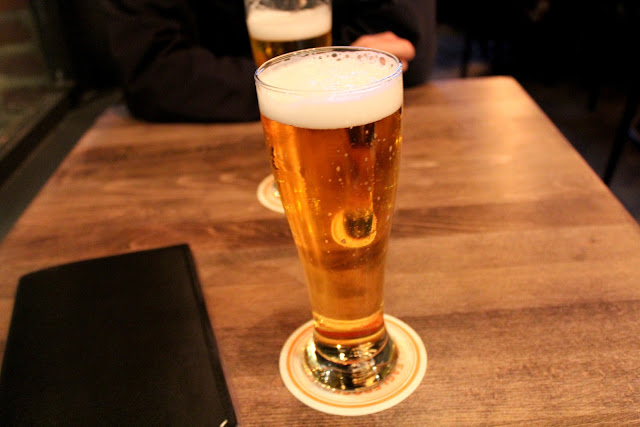 Bryce and I each had one, and he agreed with me it was delicious. We ended up having more than one. We'd already decided to hit up Musha for dinner, but we still wanted to browse the food menu. 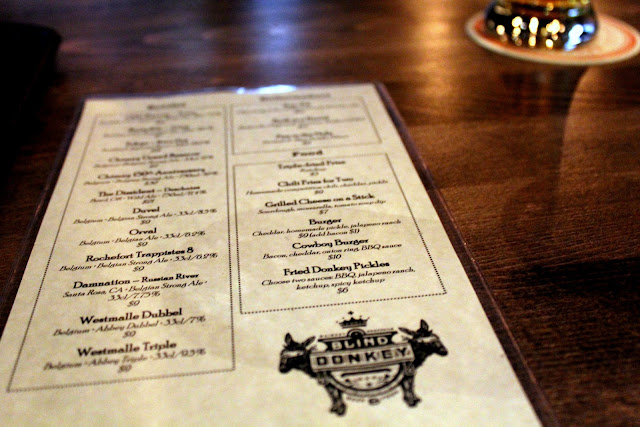 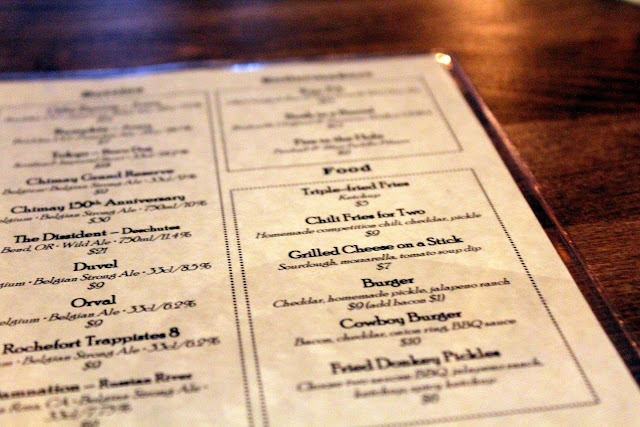 There were plenty of things that looked good and I made a note to return and have food at some point.

Eventually, a few nights later, Tracie and I were out watching basketball and our thoughts turned to dinner. 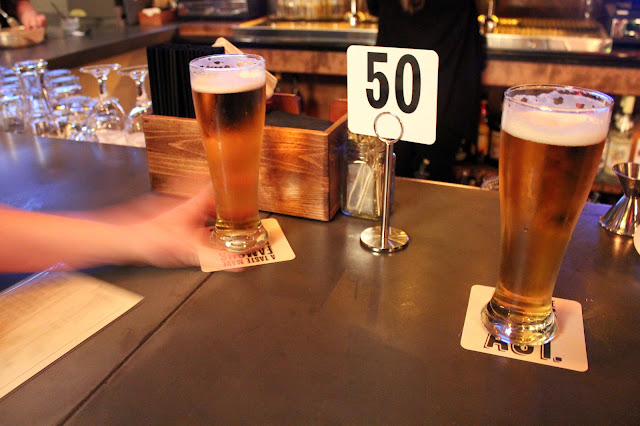 Well, somebody was too thirsty to wait for me to take a picture... Whatever. I have no one to blame but myself: I created many Blue Paddle fans during the trip. 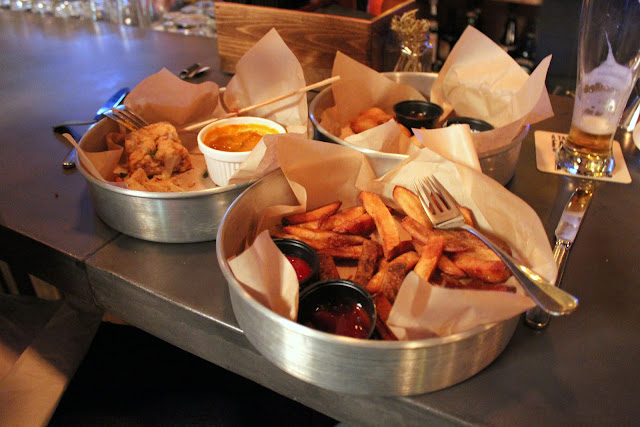 We ordered fries, the grilled cheese on a stick, and fried pickles. (Tracie said she'd never had fried pickles before, so that had to be done, although to be honest I probably would have ordered them even if I'd been alone.)

It's pretty dark in Blind Donkey, which gives it a wonderful atmosphere, but it was also crowded and I wasn't going to use the flash, so these pics aren't great. Hopefully they get the job done. 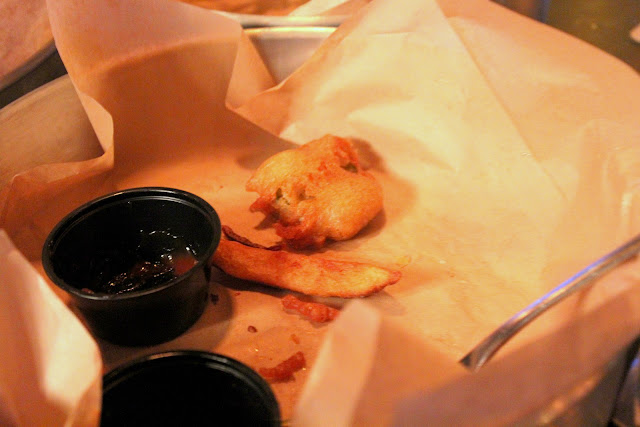 I won't bloviate: these were the best fried pickles I have ever had. The pickles were encapsulated by the crunchy beer batter yet I could still taste the pickle inside. 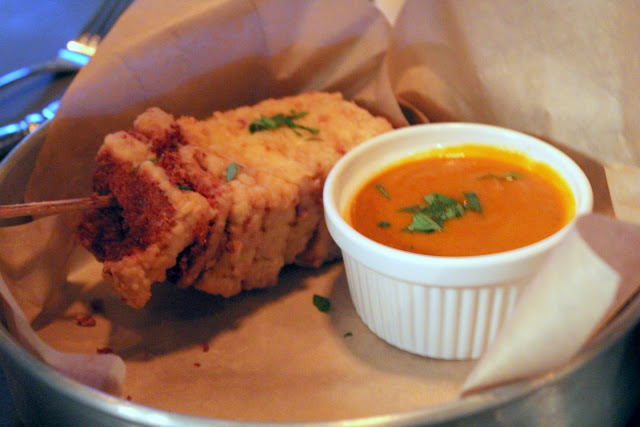 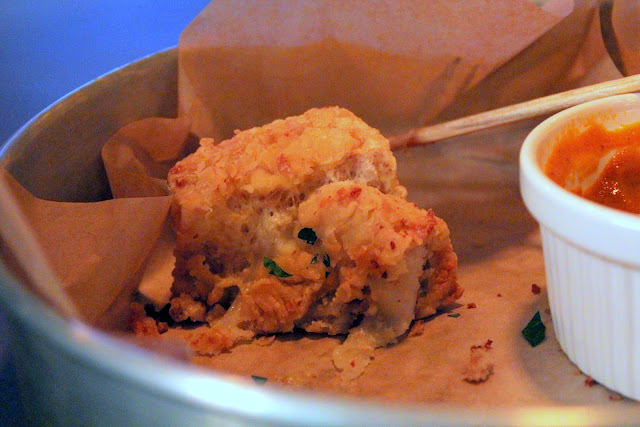 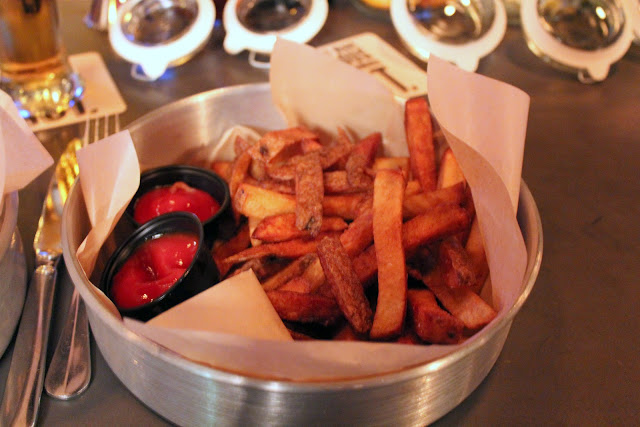 And then there were the fries. As my friend explained (I hope I get this right, I was a little tipsy), they are blanched then frozen, fried a second time and stored in the walk-in, then fried a third time when ordered. If we don't count Pommes Frites here in New York City, these might well be the best fries I have had in many years. Most of them were crispy on the outside and soft inside.

They deserve a better dip than regular ketchup - an aioli or herbed mustard would be the perfect complement - but that's a secondary complaint. My favorite fries of my entire life were the Belgian fries at Dive! in Century City, gone now these 14 years. No other fries I have eaten have come as close to Dive!'s fries as these potatoes at Blind Donkey.

I am kicking myself for not eating here until the penultimate night of my trip. But I'm guessing Blind Donkey will be here longer than the previous establishments and I'll have the chance again some day.
Posted by JustinM at 10:00 AM

I was so hoping you ordered the Grilled Cheese on a Stick. It sounded so intriguing. Sorry it was a disappointment.

Hey, have you ever heard of this book called Even More Top Secret Recipes: More Amazing Kitchen Clones of America's Favorite Brand-Name Foods? It has recipes for a bunch of fast food items, including McDonalds hot mustard.

Yes I have, although I have never bought one of those books; usually you can find the recipes online somewhere for free