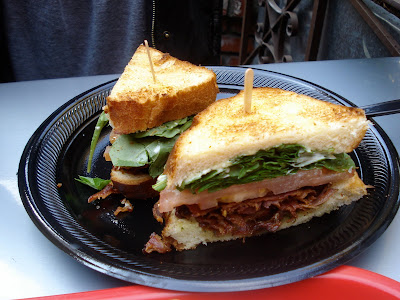 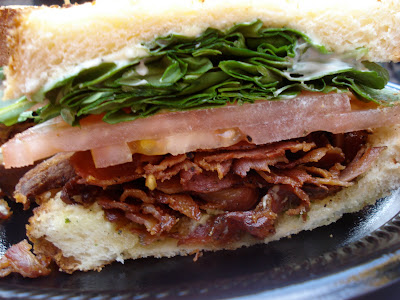 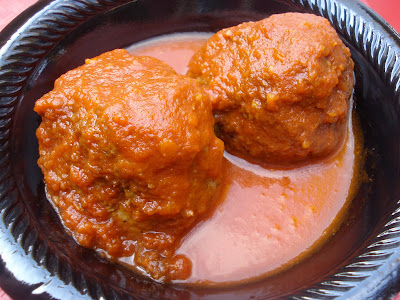 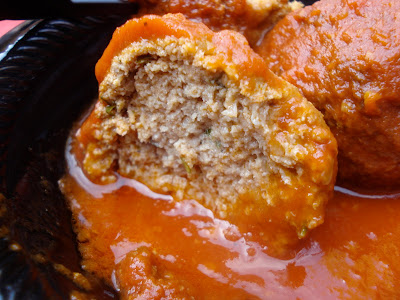 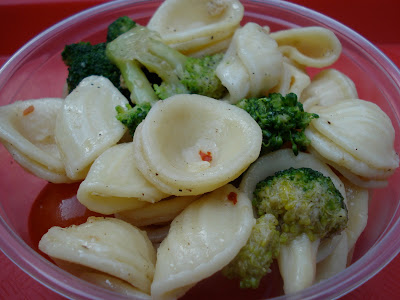 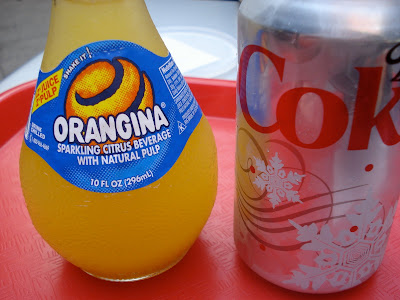 I've written about Porta Via twice before - once about their take-and-bake pizzas, and once when I ate there with Elizabeth's sisters. The other day, a slightly overcast autumn day, Elizabeth and I had lunch on their patio. It was busy - we both agreed it was as busy as we had ever seen it - but it did not take very long to get our food.
Elizabeth ordered the BLT and I had two turkey meatballs, and we split a small container of pasta with broccoli. My meatballs were good, but not as good as their regular meatballs. Obviously, the turkey contains less fat, and consequently they were a little on the dry side. I was asked if I wanted marinara sauce on top, which I did, and that helped, but then the dominant flavor of the bowl was mostly the sauce. I would not complain if I ate these again, but from now on I will stick to the regular meatballs. They are much better.
The BLT, on the other hand, was phenomenal. "This is the best BLT I have ever had," Elizabeth said. I would not go that far, but it was indeed great. (I had several bites of it.) The pancetta was cooked perfectly. I use that word literally; there is no way it could have been improved. I would have liked some more of the basil aioli on the sandwich, but overall I loved it and I see many more of these in my future on chilly days. (By "chilly," of course, I mean anything colder than 75 degrees.)
The pasta was good but not remarkable. It was just a complement to our food, though, so it was fine. To drink I had a Diet Coke and Elizabeth had an Orangina. It has been years since I have had a sip of that - orange is not one of my favorite flavors - and I tried some of hers. I still do not like it very much.
I do not know why we don't eat at Porta Via more frequently. It is cheaper and the food is better quality than most restaurants around, certainly much better than restaurants of comparable price. Maybe one day we will get around to eating there more often. From what I can tell, they are in no danger of going out of business anytime soon, and that is a very good thing.
Posted by JustinM at 11:27 AM

The Italian sub is awesome. Also the marshmallows, but they are pricey.

Murphamania - I have never been to the Cheese Shop. Remember a couple years ago we stopped at that deli in Montecito? That was pretty good.

Anonymous - I bought those marshmallows once and put them in my mom's Christmas stocking. They were good but I didn't think they were that much better than cheaper, store-bought marshmallows.

Yes I forgot about the Montecito Grinder at Montecito Deli. Freshest roast beef I have ever had in my life. That would be my 3rd favorite sandwich of all time.

I had the rosemary chicken. It was a little on the dry side. Your sandwich looked much better. But then we had Mai Tais at Longboard's on the wharf and the waitress laughed as us and everything was better. Also I met Elizabeth that night for the first time. Yes, brother, quite a day.

Are you aware that the T in BLT stands for tomato? You had several bites? I am amazed.

Don't be ridiculous. Of course I removed the tomato. Just be happy that I am willing to try a sandwich that even had tomato in it.