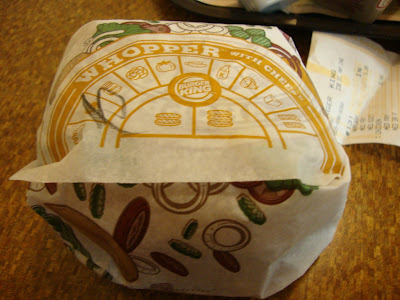 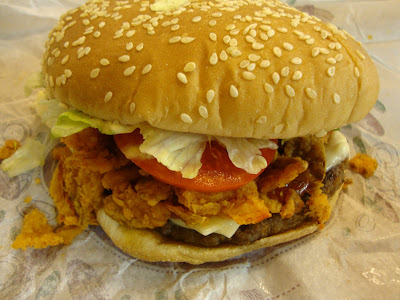 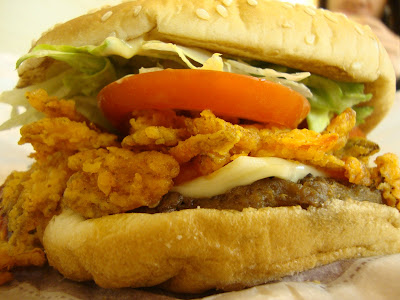 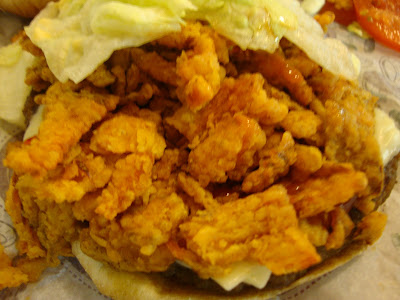 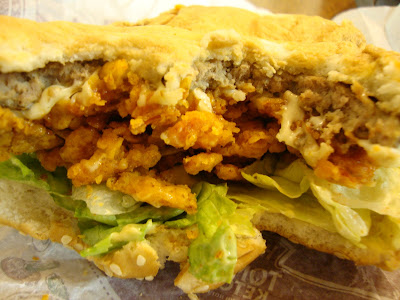 When I first heard of the "Whiplash Whopper," I immediately thought Well, there's something I'll never try. A new burger from my least favorite fast food restaurant, named after a Mickey Rourke character in Iron Man 2 (I haven't seen Iron Man 2; apparently I'm the only person in America who didn't like the first one), and one that isn't even being promoted since Burger King is so busy pushing their fast food ribs? No thanks.

Then a funny thing happened the other night. Well, it's probably only funny to me, so I will spare you the details. At any rate, Elizabeth and I were on the Central Coast at the start of a wine-tasting weekend and our original dinner plans fell through; we found ourselves on a street with three food options: an Italian restaurant that looked as if it hadn't had a customer in a few years, Carl's Jr., and Burger King. I decided to try BK.

The Whiplash Whopper sounded suspiciously like the Angry Whopper: spicy sauce, crispy onions, spicy cheese. I tried the Angry Whopper twice last year and thought it was terrible and, unforgivably, bland. Even the jalapenos on the thing were bland, which I did not think was possible. So while waiting the fifteen minutes for my food (seriously, it takes a quarter of an hour to get a Whopper ready?) my expectations were pretty low.

The first thing I noticed when I got the sandwich was the heft of it. It felt like a shot put in my hands. I unwrapped it and removed the tomato and noticed how many fried onions and fried red pepper pieces were on it. I took a bite.

Here's the part I didn't expect: it was really good. The meat tasted like a fresh beef patty just grilled up at a backyard barbecue. I cannot remember ever having a BK patty that did not taste freezer-burned and dry. Until now. And it was actually spicy. It was, unquestionably, the best thing I have ever had from Burger King.

So I'm a little torn. I would like to eat one of these again, but I want to eat this exact burger. I could see myself ordering another one and having it be terrible. So maybe I should just let it remain my one great experience at BK. (However, I would certainly try this again before I ever try those ridiculous ribs.)
Posted by JustinM at 8:37 AM

Creepy. I was driving past BK a couple of hours ago and saw the sign for this new burger. Then I thought, "I should recommend this to the Immovable Feast blog and see if he'll consider eating another BK burger!"

Haha... you are dedicated; I wouldn't have tried the Angry Whopper twice if the first one was crappy.

The burger you got was probably good because it came right out of their oven I would guess isn't always the case.

That's a nice amount of onions they gave you!

I actually looked forward to the Angry Whopper for a long time. I know someone who does voiceover work, and he had done a commercial for it and mentioned it to me several weeks before it came out. Then I tried it and was shocked at how bland it was. I mean, even the jalapenos were bland. So I figured I HAD to try it again just to make sure the first burger was a fluke.

But the second "Angry" Whopper was just as bland. Just one more reason why I hate BK. They can't even make jalapenos spicy. That's why I was so surprised that this burger was spicy and tasty.

I was hung over on Friday when I read this post and immediately upon seeing the pictures, my hangover became stomach-twistingly worse. That situation had nothing to do with your photography skills. That burger doesn't look much better today. You are a brave man.

It was pathetic, practically no heat at all.
No fast food place knows how to make a spicy beef/chicken burger.