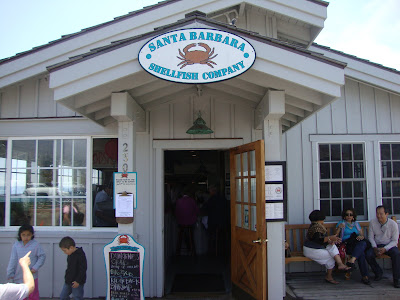 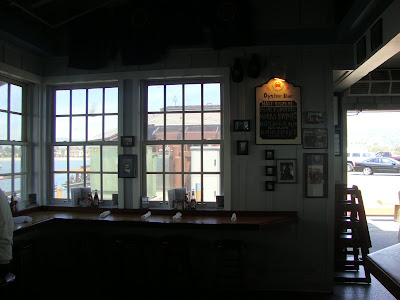 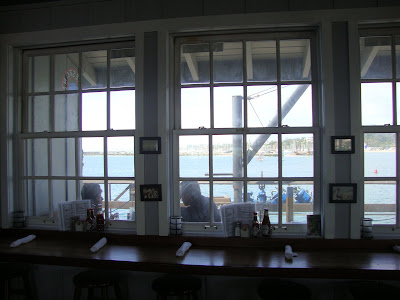 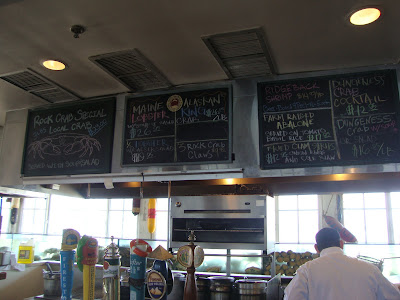 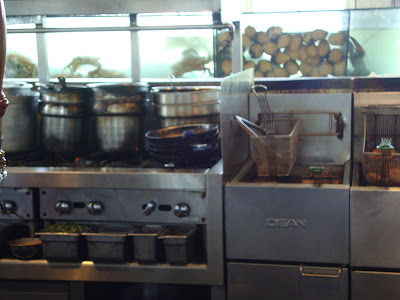 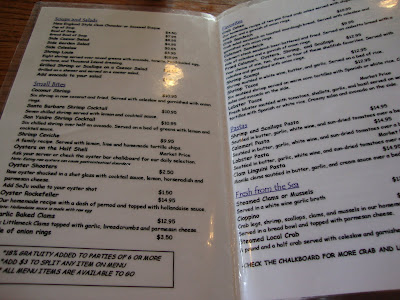 For a long time I have passed by the Santa Barbara Shellfish Company, on Stearns Wharf in Santa Barbara. But I never went there. I don't have any good reason why; I have certainly eaten a couple times at another restaurant on the wharf that I found to be average in every way. Perhaps I never felt the Shellfish Co. would justify the wait time: I have never seen there not be a waiting list.
A few years ago I saw it featured on Rachael Ray's $40 a Day - that hyper-annoying show where she ventures to places like the Hamptons and Aspen and drops thousands of dollars on shopping sprees but then shows us how to eat three meals for only $40, a task usually accomplished by some combination of antithetical-to-vacation ideas like eating early bird dinners at 4:30 PM and leaving the server an 8% tip.

But there was one thing about the episode that caught my eye: some of the food they were showing looked damn good. My ideas about the place became a little less harsh. Then, in the last two years, two different groups of people I know went to the Shellfish Co. and sent me pictures. The food looked awesome. Last week, at a happy hour, a man overheard some friends and I talking about possibly going by the Shellfish Co. this past weekend and he enthusiastically said "Aw man, you gots to go there and get some chowda and shrimps." I love it when people talk like TV characters. The die was cast. We were going there.
Sunday morning, on the way back from Buellton (and yes, for the several people who have asked me, we stayed at "the Windmill" from Sideways) we stopped on the wharf. We were having an early lunch because we still had plans to go to the California Strawberry Festival in Oxnard later in the day. (I had planned to do a blog post on that as well, but it was a gigantic mess; thousands of people waiting in long lines everywhere.)

Since it was early - a little after 11 - we were able to take two seats at the bar. (By the time we left, about 45 minutes later, the place had filled up and there were a dozen people waiting outside.) The inside of the restaurant is fantastic, resembling fish shacks I have visited on the East Coast. There are several signs advertising specials above the stoves and fryers in the open kitchen. I was trying to decide if I could handle a Maine lobster or bucket of crabs before noon. 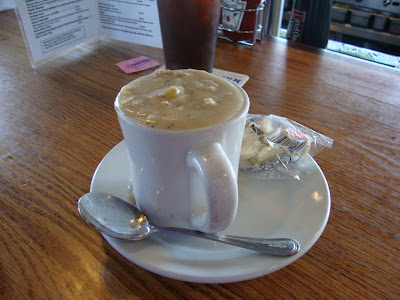 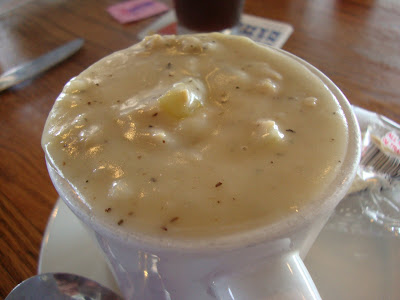 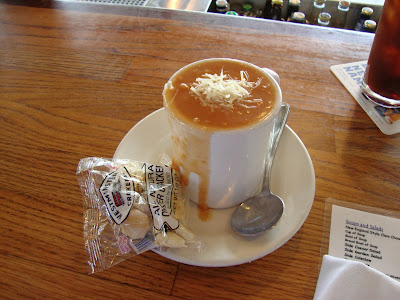 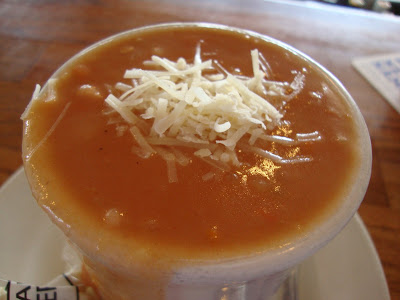 Elizabeth ordered a cup of clam chowder to start. I asked for some bisque. The latter was nothing special at all, very bland. It was not bad by any means, but it was no better than the bisque from Whole Foods or Fish King (both of which are great). The chowder, however, was fantastic. I am not a big fan of clam chowder and I never order it, but I always try it if Elizabeth says it's good. This was the best I have ever had. 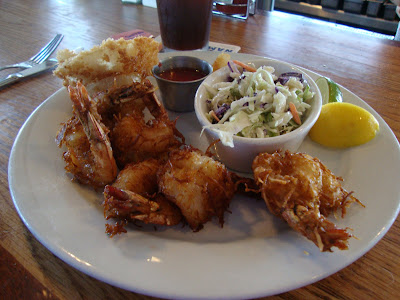 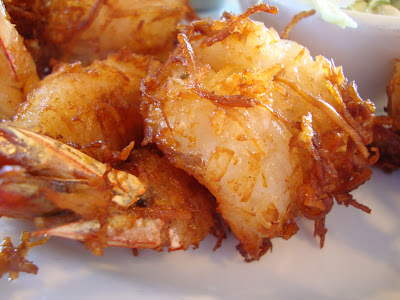 Elizabeth ordered the coconut shrimp. It is listed under the "smaller bites" section of their menu, which gave us a good laugh: it was a pretty large amount of food. She loved them. I do not like coconut shrimp but I tried one. The breading was full of coconut flavor (so I did not care for it) but the shrimp were amazing: huge pieces that were remarkably tender and juicy. 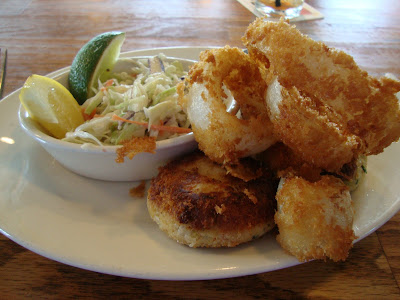 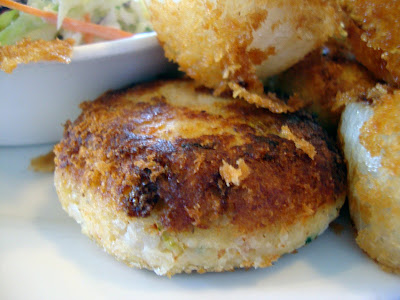 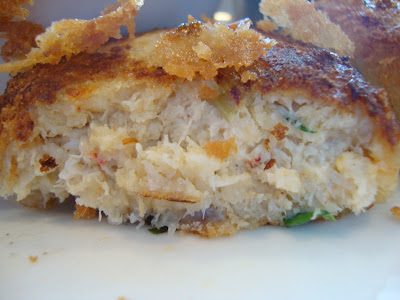 I had the crab cakes. It was a toss-up between ordering those or the crab melt, but I asked the waitress's opinion and she said that while both are very popular, the crab cakes are slightly more so, and they are her favorite. They were outstanding, full of fresh crab meat and lightly fried. Everyone who likes crab cakes knows the frustration of getting an order where the breading is fried to a dark crisp and the taste of crab takes a backseat to the burnt breading. These were fried golden and the crab meat was the star of the show.

The onion rings were somewhat of an afterthought, but they were still really good: giant pieces of sweet onion, loosely battered and fried. The cole slaw wasn't my favorite - it was much too sweet - but that's about as minor a complaint as I could possibly make about this meal.

I look forward to returning to the Shellfish Co. at some point and having their crab or lobster. I may even order a cup of clam chowder for the first time in my life.
Posted by JustinM at 11:09 AM

I wouldnt have been able to pass up the Dungeness crab cocktail!

YUM YUM YUM! This looks like my kind of place! You know I am a suck for all things clam chowder and crab cake!

Yum those crab cakes look good, I tried making crab cakes from scratch once...now I stick to just buying them!

What kind of camera do you use? I am in the market for a new one and I like how your pics come out

I use a Sony Cyber-Shot. I love it and it was a ridiculously good value, about $150 on sale. (I think it's about $175 normally.) My previous camera was a Canon Powershot that cost about three times that much and, while very user-friendly, did not take pictures as well in low light.

There is a bit of discussion about this in the comments section of a post I did in March.

Thanks I will check it out, if I can keep in under $300 my bf wont yell at me since I technically don't really need a new one but women never really need to much of an excuse to shop.

I cannot think of any good that would come from me responding to that.