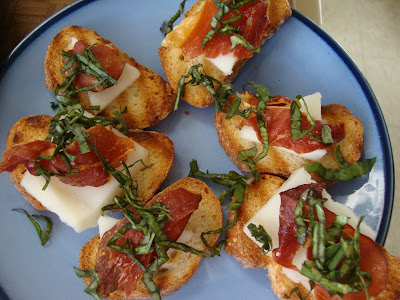 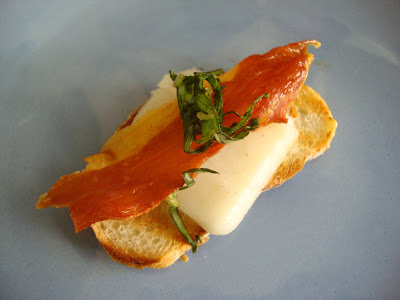 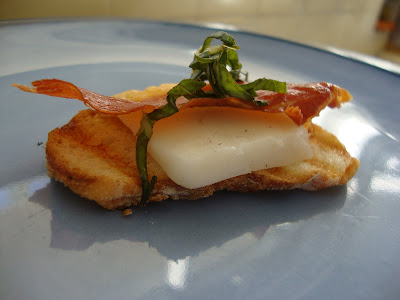 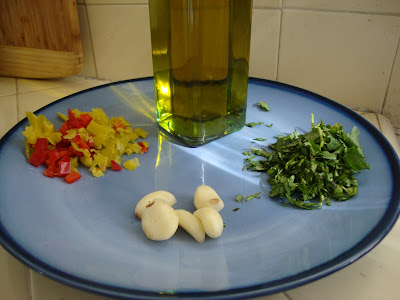 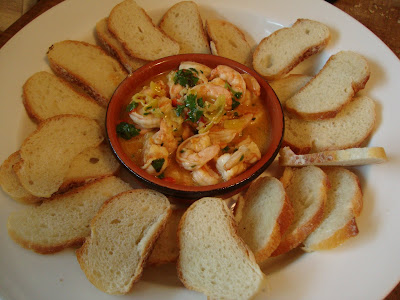 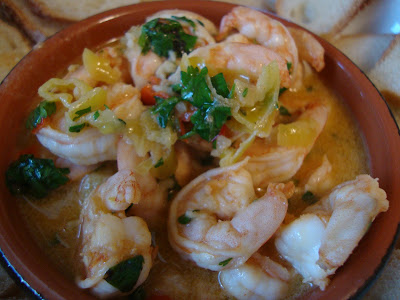 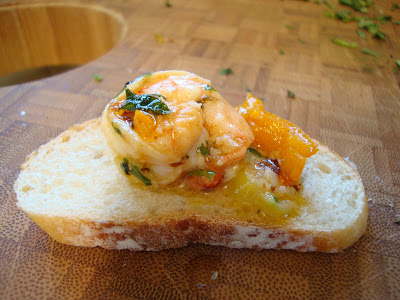 Last week my friend Mick returned from a month-long vacation in Europe. Several of my friends have gotten in the habit of emailing me pictures of food from their vacations when they find something particularly good. Mick sent me a picture of a dish he had in Spain that he referred to as "shrimp pil-pil." I had never heard of such a thing but it looked amazing, so I went online to find out exactly what it is.

It's very similar to gambas al ajillo (shrimp with garlic): it's shrimp with garlic, oil, and peppers, usually served in an ceramic dish and accompanied with crusty bread. I immediately made plans to make it soon, reading different recipes and gathering ideas. Last night seemed like a good time to experiment.

As an appetizer, I toasted some crostini and topped it with Drunken Goat. I have written of this cheese many times so a brief description is all that is necessary: a Spanish goat cheese submerged in red wine for 72 hours. To offset the mild, fruity nature of the cheese I baked some prosciutto in the oven for twenty minutes, crisping it up. I then sprinkled some basil over the pieces.

For the shrimp, I sauteed chopped garlic in olive oil and butter until it was golden, then added two kinds of peppers - pepperoncini and sweet peppers - for a couple minutes, turning up the heat. I coated the shrimp with paprika and added them; they cooked quickly, no more than three minutes. Most pil-pil recipes call for a dusting of parsley, which I love but Elizabeth does not. So I used cilantro instead, along with a few sprinkles of red chili flakes.

I poured the shrimp into a ceramic container (a Trader Joe's fan might recognize it as one of the vessels the TJ's creme brulee comes in) and served it with slices of bread. It was fantastic. I will absolutely make this again, although next time I will add some more sweet peppers and also a few drops of sherry.
Posted by JustinM at 11:43 AM

This is another one of your "screen licking" entries - where I try to lick my computer screen at my desk.

That's a pretty sweet cutting board. Where did you get it?

It was a gift from someone several years ago. I think she bought it at Sur La Table. I love it, although it's pretty big so I can't keep it on a counter in the kitchen; I have to put it away and bring it out for use. It's bamboo so it's very smooth to work on and easy to clean.

OMG I seem to be drawn to your blog more when I am dieting, right now I am trying to avoid carbs to make up for a trip to Ireland we just got back from....I want to go buy a loaf of bread now and try to make this.

This dish would probably go good over some type of pasta as well it looks like.

I should email you a picture of some fishcakes we had in Dingle in a thai chili sauce, it was divine and unexpected.

Where can you get that cheese from...cheese with wine in it sounds like a complete winner to me.

As an FYI my friend was telling me about a small wine festival in a few weeks in Calabasas you guys might like. I'm going to try to volunteer for it so I can get in for free. :-)

Well, the shrimp portion of it is definitely low carb. You could eat that by itself. Or get some kind of low carb wrap and put it in that. It probably wouldn't be as good as crusty bread - that soaks up the juices perfectly - but it would still be good.

You can get the cheese at Whole Foods or Bristol Farms... or Fresh & Easy for half the price.

This shrimp dish was so good! Such a nice flavoring.