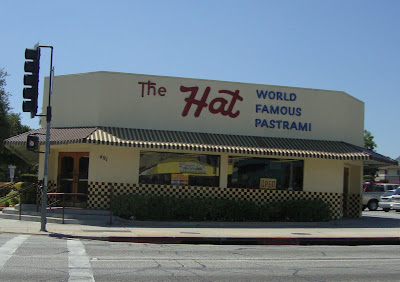 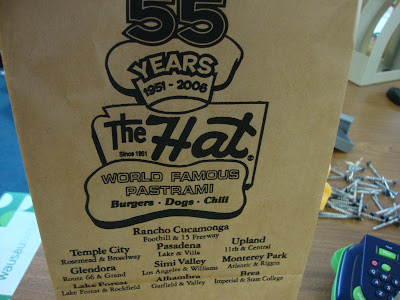 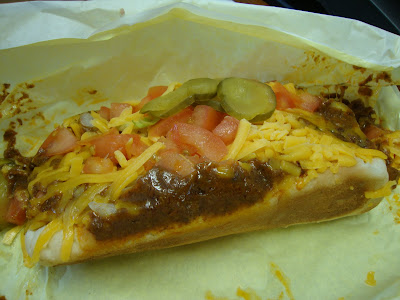 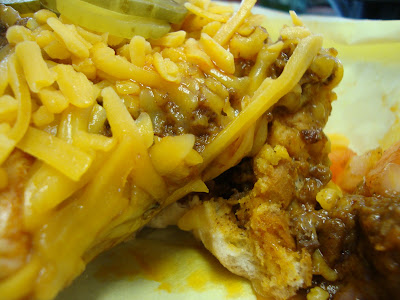 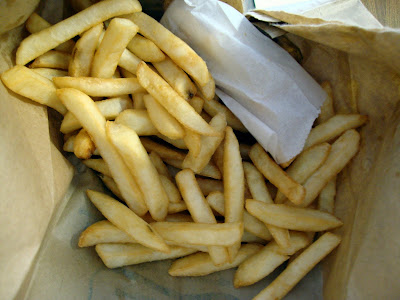 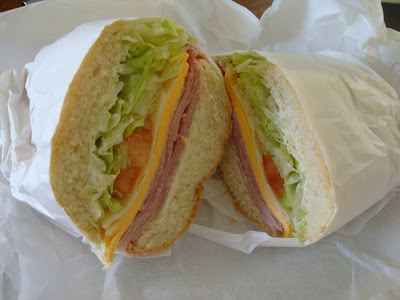 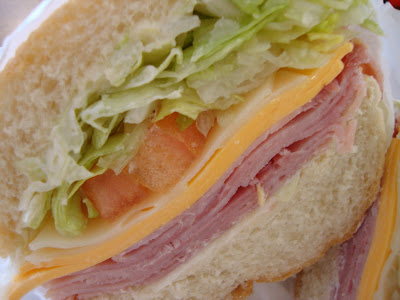 I had yesterday off so I worked for a couple hours (which was probably 90 minutes longer than necessary, but that's a whole other story) hanging cabinets at my mom's work up on Lake Ave. It was a very warm day and I worked up an appetite. The nice thing about the location is the plethora of restaurants within walking distance: The Slaw Dogs, El Taquito, Tonny's, Cabrera's, etc. But I was sweating and probably not smelling great so I chose the closest place, The Hat, so that I could get the food and take it to go.

I wrote about The Hat back in December, my first visit in many, many years. I had a pastrami burger then, and I loved it, but I wasn't in a burger mood yesterday. I chose a chili cheese dog. I ordered a ham and cheese sandwich for my mom (I knew they had a selection of cold sandwiches, but to be honest, I have never once heard anyone talk about them). Last time I got a large order of fries and found them to be perhaps the largest order I have ever seen. So this time I got a small order for my mom and I to split.

Unwrapping the hot dog a couple minutes later was a little scary: it was big. I picked off the tomatoes (I still don't like chopped tomatoes) and did my best to eat the thing without it falling apart. I did a pretty good job; it wasn't until the last couple bites that the thing became impossible to eat with my hands. It wasn't as good as the pastrami burger, but I would definitely get this again.

My mom really liked the ham sandwich, although she said she preferred it on sourdough. (I hadn't realized there was a choice of bread and so when asked I just said "French roll," figuring that was a pretty innocuous choice.) The small order of fries was still too large for the two of us to share.

Once again I had a very good meal at The Hat. It's not the best of the neighborhood choices but it was perfect for the occasion and inexpensive for the amount of food you get.
Posted by JustinM at 1:10 PM

The Hat's "regular size" fries is eclipsed only by Tops. Both places have a single serving size that is a gut buster.

Yesterday I spied that Big City Hot Dogs is open. And I got a package from Denmark recently with some remoulade and a bag of dried onions. I have a feeling that it's going to be a hot-dog full couple of weeks.

Their ham sandwich looks pretty good! I've never tried their non-cooked items. I like how their tomatoes and lettuce are always fresh somehow.

Yes, I was surprised by how good it looked. I was expecting a "Lucky Boy" ham sandwich. (That's a pic I don't think will ever make it onto the blog; it's one of the grossest things I have seen.)

My mom only ate half the sandwich and was offering it to anyone else, although no one took her up on it. But I don't see any reason why it wouldn't be delicious the next day.