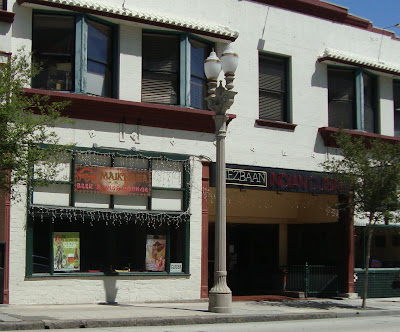 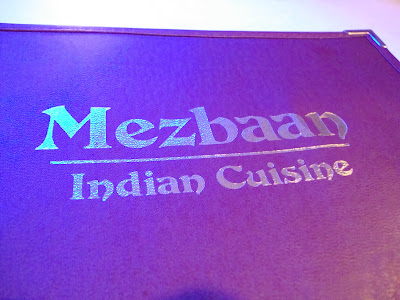 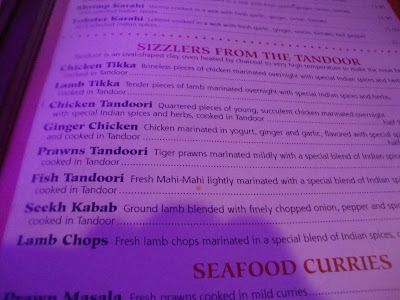 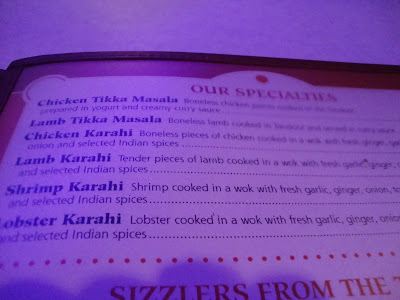 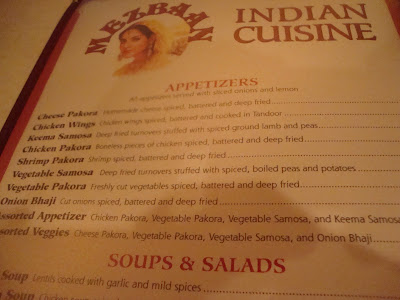 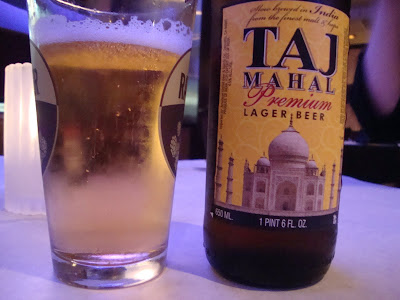 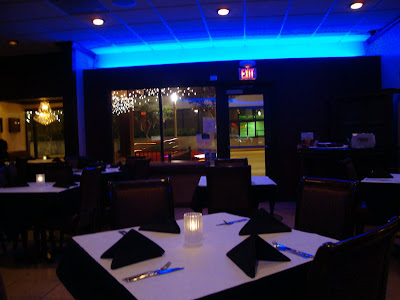 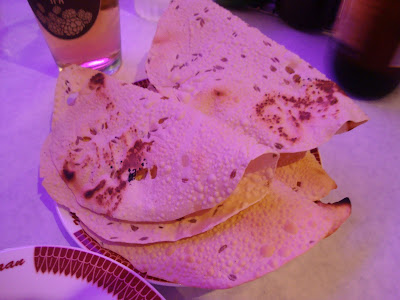 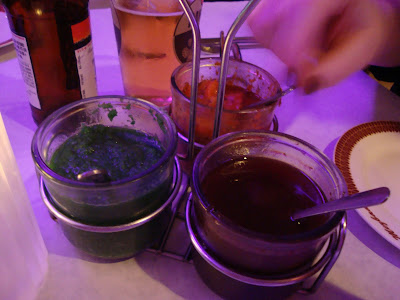 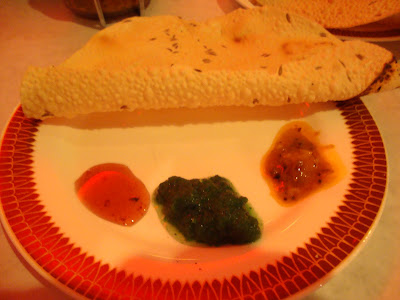 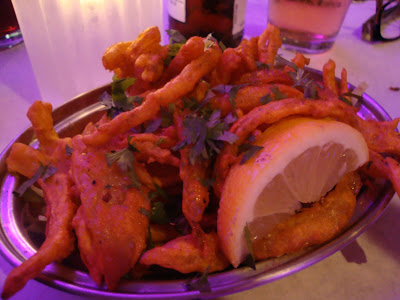 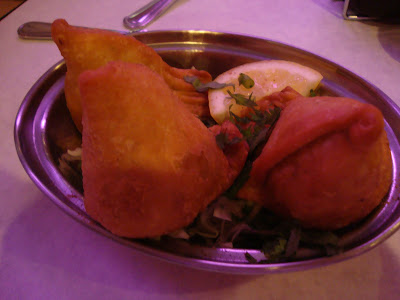 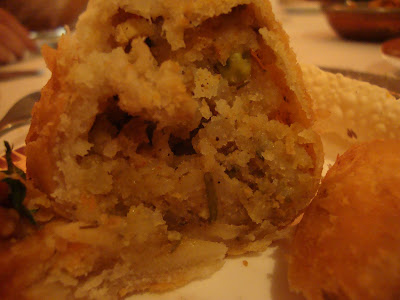 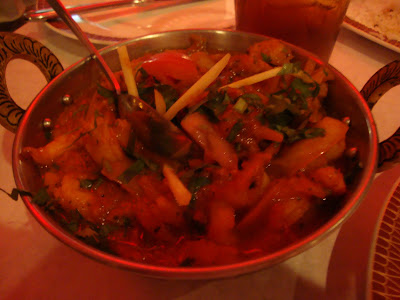 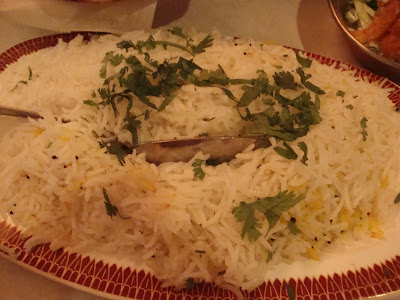 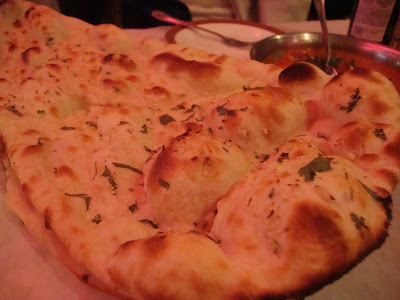 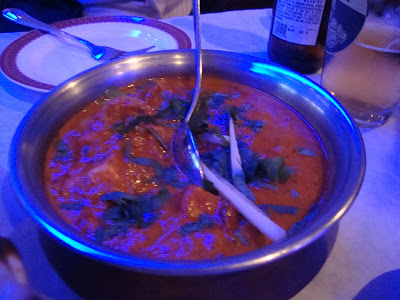 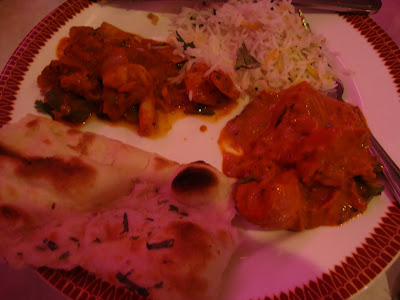 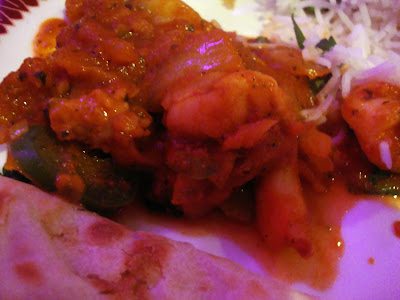 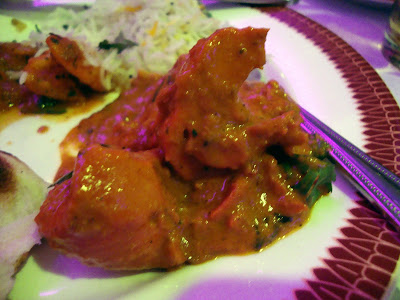 I have eaten at restaurants in Pasadena thousands of times over my 31 years. Picking the best meal would be harder than picking my favorite Van Morrison song or my least favorite Angels game of this season. But picking the most fun meal is much easier: a surprise birthday party for my friend Carla at Mezbaan at few years ago would be impossible to beat.

I had been told about the party the night before, although my friends Dave and Dave neglected to tell me it was a suprise, so I was mentioning it right in front of Carla. It's possible when I left that night I said something along the lines of: "Goodbye, Carla, see you tomorrow for dinner at Mezbaan," but she still didn't know about it. The next night she came into Mezbaan and was shocked to see 15 people waiting there for her.

The dinner lasted more than three hours. I was using disposable cameras to document the evening and I kept running out, so my friend Kevin and I had to keep ducking out to the little store around the corner (now gone) and buying more. We could have purchased several at once but we had another motivation for our frequent missions: each time we went out we ducked into McMurphy's next door and did a shot of Hypnotiq, a liqueur that is a blue color not of this world. Why we chose this I have no idea. There must have been a reason, although I cannot possibly think of one now.

After dinner we all did a shot of it, then ventured to Sorriso, where a friend of ours worked. Kevin had a martini that did not agree with the Hypnotiq and Indian beers. We lost him a while later and were able to follow the trail of blue vomit to where he'd caught a cab. I don't see any scenario in which a night like this would happen all these years later - nor would I particularly want it to - but at the time it was exciting. There was a girl in those days who was an important part of my life - the most important, perhaps - and although I could not have known it that night, it would be the last time I would ever see her. I suppose I could remember that night in any number of ways, but I remember it as the most fun meal of my life.

The interior of Mezbaan has changed a lot since then and the large alcove where we ate does not look the same, but the echo of that night seven years ago still rings whenever I walk in. There are very few restaurants that smell as welcoming the moment you enter. Saturday night, Elizabeth, Carla and I stopped in for dinner.

Mezbaan is dark and the light system changes from blue to purple to yellow to red. I will never take pictures with a flash inside a dark restaurant so the light in each picture here is a different hue, and they're definitely not my best pictures. But if that's the price I have to pay not to disturb my fellow diners, I am okay with that. If you understand this then you're all right with me. I ordered a Taj Mahal lager and opened the menu, although the first appetizer is immutable here: onion bhaji.

Onion bhaji - a mix of battered and fried onion pieces - are always good, but Mezbaan's might be my favorite, spiced perfectly and always fried golden brown. I dip them in the chutneys that comes with the papadums - Indian flatbread served at the start of the meal without fail, the same way Red Lobster serves their cheddar biscuits. (Except papadums don't suck, they're delicious.) Our friend Murph stopped by and had a Coke while we were eating. He's not the most adventurous of eaters but we got him to try some bhaji and he was impressed.

Next up we had vegetable samosas - turnovers filled with spiced peas and potatoes. They come two to an order but, like most Indian restaurants, Mezbaan has no problem serving you the number you want (in this case three) and adjusting the price accordingly. These were outstanding. Of the three Indian restaurants in Old Pasadena I have my favorite dishes at each, which is why I can't say that I truly like one more than the others. The samosas at Mezbaan are definitely my favorite.

The first of our two entrees was chicken tikka masala. We'd requested it spicy. (I believe we'd said "3/4 of the spiciest possible," although in retrospect that seems like a curious way of defining it.) It was almost the perfect amount of heat: not overpowering, but enough to make me reach for my Taj Mahal after every couple bites. We had basmati rice and garlic naan with it as well, which are both great and help temper the heat.

(If you're thinking we got a lot of food, you are correct. Indian food is perfect for a large group where people can share family-style. It gets more difficult when it's just two or three people and you want to try a lot of food. At any rate, we took the leftovers home and I had naan and shrimp for breakfast the next morning, as bizarre as it was delicious.)

We also had my favorite entree at Mezbaan, perhaps my favorite Indian entree anywhere - shrimp karahi. These are cooked in a wok with garlic, ginger, onion, tomato and Indian spices. When done perfectly - which Mezbaan always seems to accomplish - this is as good a dish as I have eaten in Old Town since Kuala Lumpur closed and their mee goreng (always ordered "extra-spicy") left my life.

No matter how many entrees are on the table, these will go first. I once had an Indian meal in Manhattan with a dozen people and twice that many dishes on the table, and the shrimp karahi, which I introduced all of the people to, was the first to go.

We were all full when we finished, and extremely satisfied. This was only Elizabeth's second Indian meal, her first being All India Cafe last fall, and she mentioned more than once over the next 24 hours how good it was. And I agree. I may not be able to choose between the three Indian restaurants in Old Town, but I will say this: Mezbaan is the only one at which I have never had a disappointing meal.
Posted by JustinM at 12:25 PM

I've read hundreds of your posts and this is one of my five favorites.

I love Mezbaan, although we usually go for the lunch buffet. I think it's really fascinating that they have New Belgium's Ranger IPA glasses on the table... interesting.

Anon: Thanks. Although I bitch about how my favorite restaurants in OT too often disappear (while places like Cheesecake and Buca pack in the crowds), there are still a few places that I truly love.

Ben: I have a few friends who love the lunch buffet, but I have never been. Your baby girl probably isn't ready for Indian food yet, but someday...

Akbar & All India are my fav Pasadena Indian joints.

There was a girl in those days who was an important part of my life - the most important, perhaps - and although I could not have known it that night, it would be the last time I would ever see her. I suppose I could remember that night in any number of ways, but I remember it as the most fun meal of my life.

Keep on writing like that Pulled Porker and you'll be a paid writer!

The first meal I ever had at Akbar, in 2003, was perhaps the best Indian meal I have ever had. The second time, a few months later, was without question the worst. The rubber match, about a year later, was somewhere inbetween the two, but the service was terrible.

So now I stick to All India or Mezbaan. It depends on the mood. If I want to go the festive route with several beers and the Bollywood movies playing on the TV screen, I go All India. If I want quieter or romantic, I go Mezbaan. I am going to introduce Elizabeth to Akbar, though, to get her opinion.