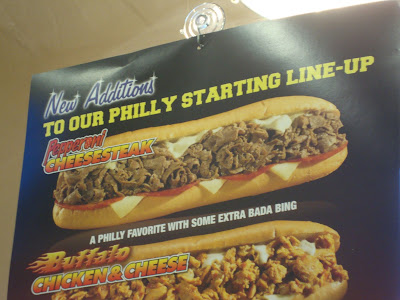 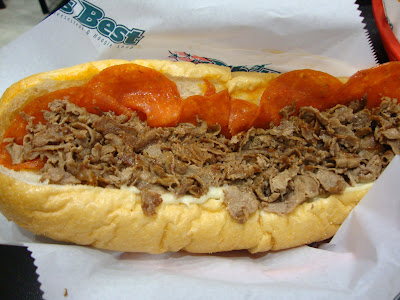 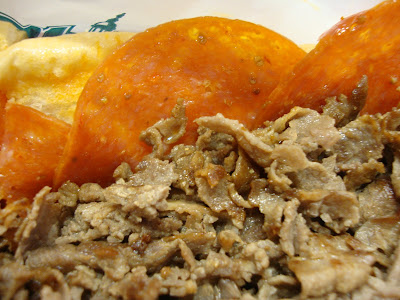 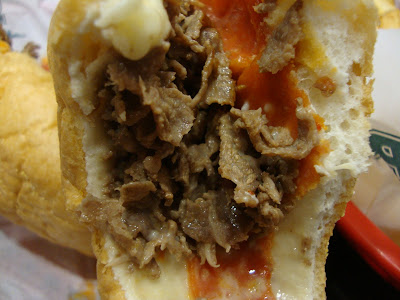 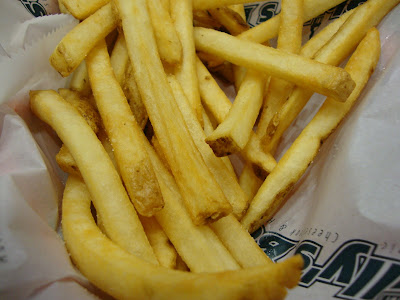 I was at Vroman's last night, looking for the new issues of Lucky magazine and Teen Vogue. Just another typical Wednesday night for me. They did not have either and my thoughts turned to dinner. I was planning to go home and make something out of the fridge.

"Do you know what sounds good to me?" Elizabeth asked. (Oh, by the way, Elizabeth was with me. You didn't really think I was the one looking for those magazines, did you? Okay, maybe Teen Vogue.)

"The Crab Cooker?" This is a bit of an inside joke; a couple weeks ago she asked me the same question and I guessed Crab Cooker, which turned out to be completely right, although we did not go.

So we went to Philly's Best. On the way there I was trying to think if they had anything new that I have yet to try. I don't know why I concern myself with that: every time I try something new I think This is good, but I should have just gotten the pepper steak with cheese. It's hard to beat one of their regular cheesesteaks.

As it turns out, they did have something which, if not new, I had never had before - a "Pepperoni Cheesesteak." Not surprisingly, it was a regular cheesesteak with a layer of pepperoni. I ordered one. Elizabeth oredered the only thing she has ever ordered: a cheesesteak with American cheese.

Upon first bite, I did not see much difference between what I'd ordered and the regular cheesesteak. It simply tasted a little saltier. But with subsequent bites I began to taste the pepperoni and it was actually quite good. But, I have to admit, the pepperoni really doesn't add anything to the sandwich. I don't think I will ever order this again.

So, now that I have eaten pretty much everything they have come out with (except the meatball, which I've tried to order twice and they were out of), I have to say my order of preference is this:

I am an admitted Cheesesteak novice, having tried my first one just over a year ago. Being a native Californian, I still don't know the difference between a Cheesesteak and a Hoagie (sp?). I'd heard a lot about them all my life but had never had the experience.

My first experience with the Cheesesteak was totally underwhelming as I expected a LOT more flavor. It turned out to be dissapointingly subtle. At the time I thought I would never have another one.

But it's not that easy - later a craving hit me; not a craving for the flavor but for the texture. There was a haunting, lingreing desire for the finely chopped beef blended with the melted cheese. I also came to appreciate the understated flavors. It really is yummy.

I have no idea where to find a "great" one; I've only tried a couple of places. Luigi Ortega's (across from PCC) is very good in my opinion. I would love some suggestions for other spots!

My first experience was in Philadelphia. The idea of a cheesesteak was not something that I'd ever really considered. Then, after a night of drinking with some friends, one of the girls with whom I was staying took us to a cheesesteak joint. It was one of the 5 most amazing culinary moments of my life.

I tried a few places after that, but nothing lived up to that one in Philly. This is not surprising: context is often everything in these matters and perfection is usually something that occurs to me ex post facto. Rarely in the moment do I realize something is perfect. So I gave up on Cheesesteaks.

Then, a year and a half ago, I was helping my brother build a set for a TV show at Sepulveda Dam. One of the producers of the show went out and got lunch for us from Philly's Best. He was from Philly and claimed they were the best he has ever had in California. It certainly was for me.

I have gone to Philly's Best quite a few times since then. Sometimes they have fallen short of greatness, but they have always been good. And every once in a while I have had a cheesesteak from them that was every bit as delicous as that one I had in Philly, although for obvious reasons they have never been as "great," and none probably ever will be again.

J - Have you tried South Street in Burbank?

Yes, many years ago, just after another visit to Philly (just for the afternoon while driving a friend up to Boston; I stopped in Philly because I wanted to take a sightseeing tour).

I wasn't impressed. Although they had the Amoroso rolls, the one I got was stale, which surprised me since they were pretty busy. And the meat was really greasy. But I would give them another try now that I've had so many Philly's Best sandwiches, if you think I should.

Philly's Best is the best I've had in the Southland. I was just there today and they have a $5 dollar subway-like cheesesteak special now except, you know, they actually cook your food to order.

My favorite still has to be The Cheesesteak Shop up in the SF Bay area though.

That looks so good. If you ever get a chance. I would recommend you try Stacked Sandwiches in Arcadia. I would love to read your review about them.

I'll try to do it this week, Thirsty Pig.