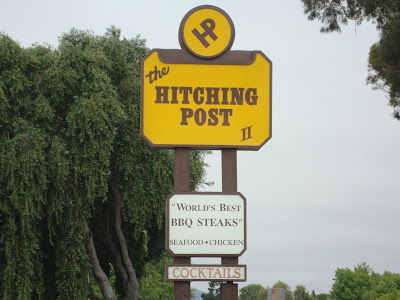 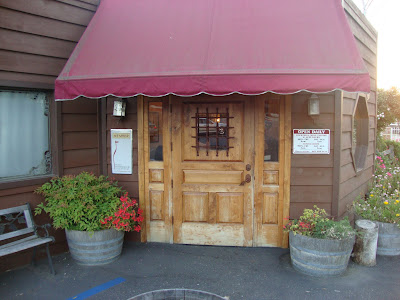 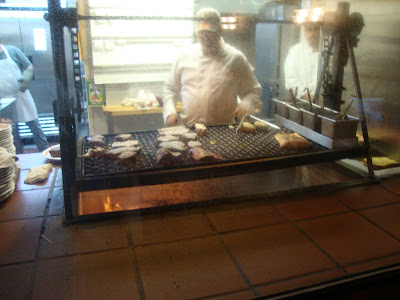 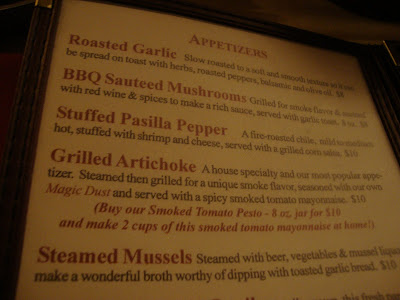 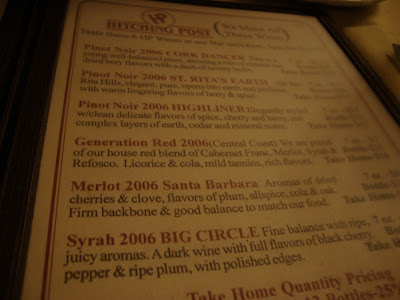 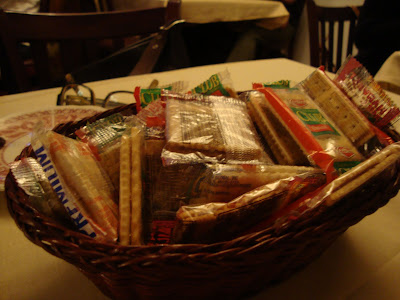 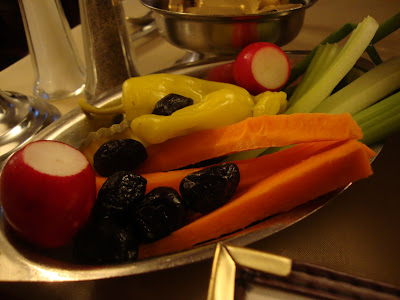 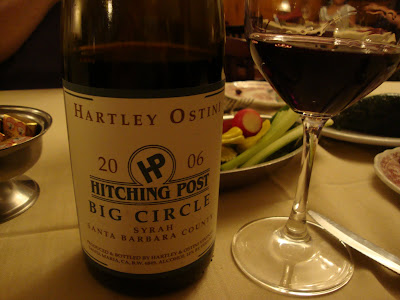 I could not begin to estimate how many times I have driven past the Hitching Post II, on Highway 246 in Buellton. I have been going to the area since 1994. Fifty times seems too low. One hundred might be more accurate. I have no idea. What I do know is that I had never eaten there, nor did I ever feel any strong desire to. Twice I have eaten at AJ Spurs, a steakhouse a short ways down the highway, and both meals were relatively average.

It always seemed like the Hitching Post II would be something of a tourist trap, the kind of place tourists would love after a day of wine tasting. These were thoughts I formed long before the movie Sideways prominently featured the restaurant as, well, the place the main character frequents after long days of wine tasting. Despite several such trips in the last few years, some even intentionally mimicking the movie, I still never had been to the Hitching Post II. Far better, I always reasoned, to venture to the Far Western Tavern in Guadalupe, or perhaps the Cracked Crab up in Pismo.

But this past weekend was Elizabeth's 30th birthday celebration, and we both wanted to try the Hitching Post II, so that is where we made reservations. We walked down to the restaurant from our hotel, gave our name, and waited a few minutes to be seated. It is dark inside, darker than I expected, although too busy to be accurately called "intimate." Still, there is a fun vibe to the place.

I paused to take a picture of the Santa Maria-style grill. Very few things in life are prettier than steaks cooking over a fire of red oak. I thought back to a wedding rehearsal dinner I attended a year ago, a couple miles from here. The cooks had grilled steaks on a similar grill; it was the best wedding-related food I have ever had, by a long shot, as well as one of the most enjoyable meals I have ever eaten. My anticipation was growing by the moment.

First things first, before sampling the crudités and crackers on the table: selecting the wine. A few hours earlier, in Los Olivos, I had sampled my favorite wine of the day: a 2004 Syrah. So I ordered the Hitching Post's "Big Circle" Syrah. At first drink the flavors were too intense; the taste of dark berries needed to mellow. Which it did after a while. 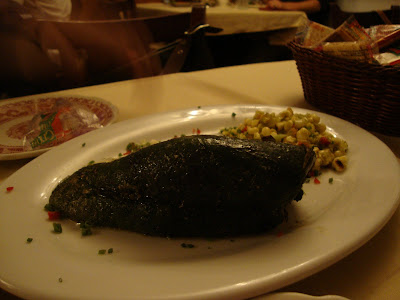 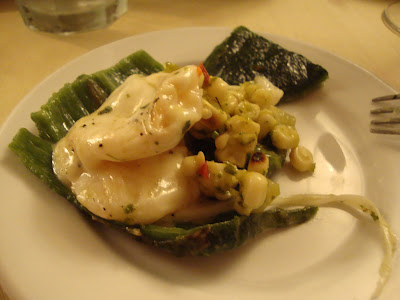 As an appetizer we ordered the "Stuffed Pasilla Pepper" - a roasted chili pepper filled with shrimp and cheese, with a corn salsa on the side. The pepper was delicious, the shrimp was cooked perfectly, and the corn salsa was probably the best I have ever had, including any I have made. Strangely, the cheese was a rubbery, melted mess, similar to string cheese. It was not bad by any means - it was still cheese, after all - but it seemed out of place in the dish. It was distracting to think how great this could have been with an higher quality cheese. Regardless, I would not hesitate to have this again. 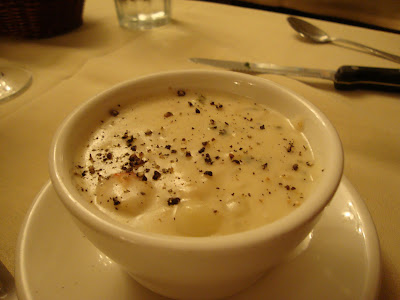 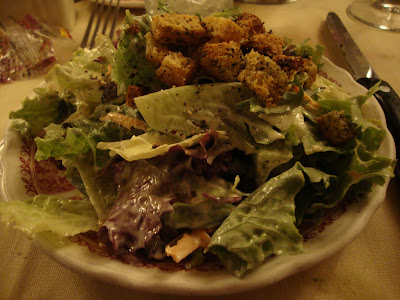 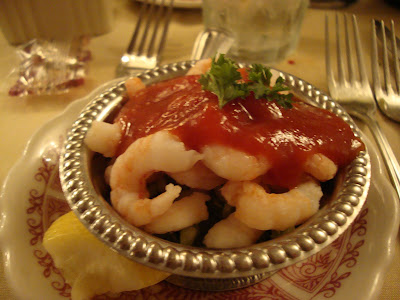 With our entrees we had a choice of soup or salad, as well as a shrimp cocktail and choice of potato or rice. Elizabeth ordered the clam chowder and I had a salad with blue cheese dressing. Neither of them were particularly good. The chowder was bland and my salad was very oily. Not inedible - I cleaned my plate - but nothing more than a basic dinner salad.

Elizabeth did not like the shrimp cocktail at all. While I did not love it, I certainly liked it, and I ate all of mine. And all of hers. The cocktail sauce only had the slightest touch of spice; it was too much like ketchup. But I love shrimp so much that even if had been a bowl of shrimp with actual ketchup on it, I probably still would have eaten it. 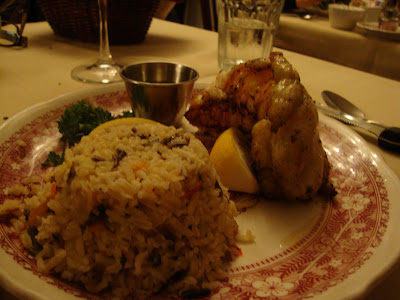 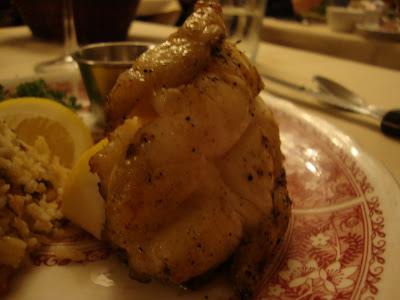 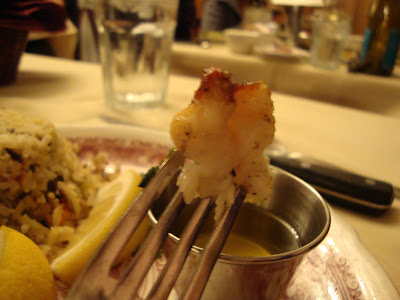 Elizabeth had the Australian lobster tail with rice pilaf. It was outstanding. She was nice enough to give me two bites. The meat was firm and buttery and tasted slightly of the grill, which is certainly a good thing, I could have eaten an entire tail in addition to my dinner. 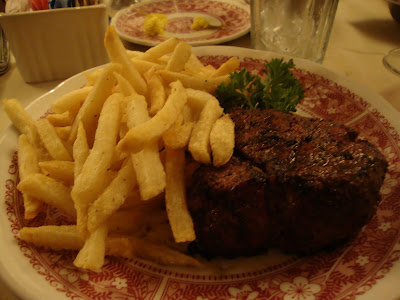 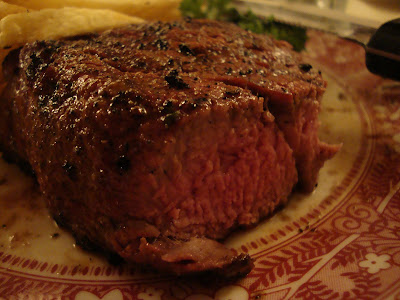 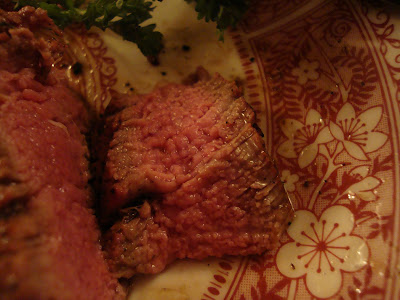 I selected the 8 oz. filet mignon with fries. (There are also 5 oz. and 12 oz. cuts available.) The Hitching Post II seasons the meat with a blend of spices (called "Magic Dust") before cooking them on the grill over oak. I cut into the steak with my knife - although my fork would have undoubtedly worked. It was the perfect medium-rare that I had requested.

I may have had a better steak at some point in my life, but I do not remember when. This was simply spectacular. I repaid Elizabeth for the taste of her lobster by giving her two pieces of my steak, and she agreed. I was expecting the Magic Dust to be too salty, but it was not. I took my time with the steak, savoring each bite. Part of me wished I'd ordered the 12 oz., but part of me was glad that I had this exact steak in front of me, because I cannot imagine anything else being as good.

It almost seems absurd to write about the fries - I mean, who really cares what the fries are like when you have a steak this good? - but I have to: they were fantastic. I'd expected some kind of steak fries or potato wedges, but these were freshly-cut potatoes, I believe twice-fried in the classic Belgian manner. I wanted some steak sauce to add to them, but I was afraid that request would be interpreted as my needing steak sauce for my steak. (This was the only steak of my life that I would not have even thought about putting A.1. sauce on.) So I asked for some steak sauce and pointed out that I needed it for my fries, not the steak. I am sure this amused the waitress - or maybe she just thought I'd had too much drink. At any rate, I was glad I'd made the distinction.

I am not sure my initial assumption about the Hitching Post II was incorrect. It is something of a tourist trap, and several aspects of the meal were below-average. The wine was acceptable, but on a day during which I'd had Foxen wines, as well as the best Syrah I've ever tried, it was something of a letdown. Some of the side dishes would not have been out of place in a Coco's. But the centerpiece of the meal was, of course, the filet mignon cooked on the Santa Maria grill. And it was the best I've ever had.
Posted by JustinM at 10:04 AM

Damn I can almost taste the steak.

That steak looked so good! I want Elizabeth's lobster though! Yum yum! I want to try the Cracked Crab, now I am researching!!

You can read my thoughts and see pics on the Cracked Crab right here.

The prices have certainly gone WAY up over the last 9 years that I have been going there, and the portions have gone down, but the quality is still great.

This was certainly one of the best meals I've had. The all around experience was fun and the food was just phenomenal.

youre the bomb, PP. and happy birthday elizabeth!

OK the photo of the steak is enough to make us do the drive....

Good to hear! I've been missing The Two Guys...