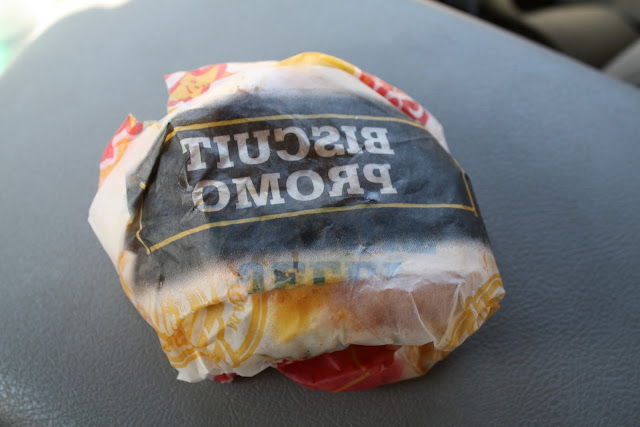 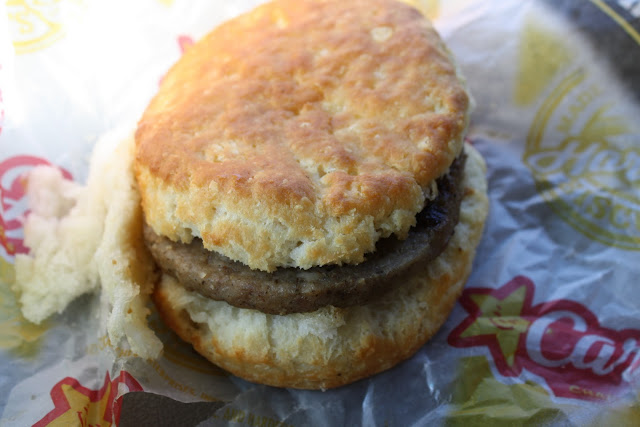 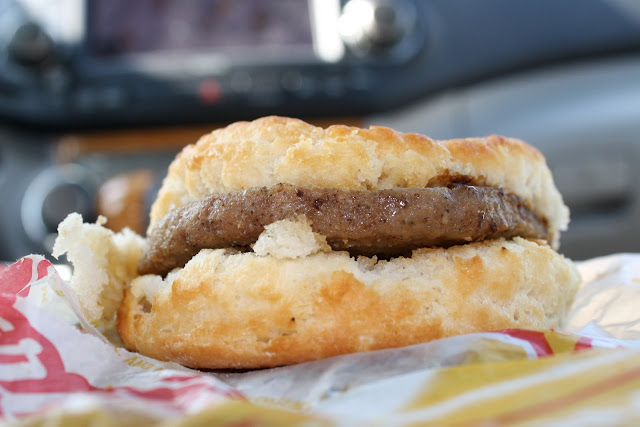 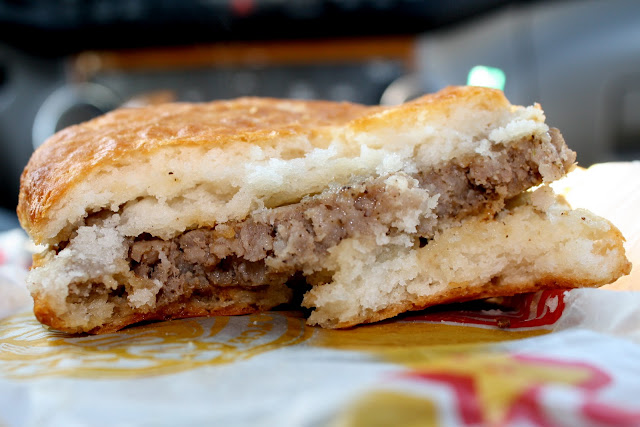 "I'd love to try the sausage biscuit" I said to the woman behind the counter.

I told her no thanks, she made a couple of motions at a lightning speed, and next thing I knew she was handing me a wrapped biscuit in a paper sack. I took it out to the car.

It was barely warm, but I'm not complaining. I'm sure they made a bunch of them ahead of time and left them under heat lamps. They couldn't be expected to make free biscuits to order.

It was still good - or rather, the buttermilk biscuit was good. It was flaky and tasty. The sausage was merely okay. The only other fast food sausage biscuit I have ever had is McDonald's, and this was about the same: surprisingly little flavor considering the amount of fat.

Would I rather have this sausage biscuit than the McDonald's version? Sure. But I live three blocks from McDonald's and the nearest Carl's is three miles away. And, to be honest, I prefer the frozen Jimmy Dean turkey sausage biscuits over either. So I don't think I'll ever be trying one of these again. But it was better than I was expecting. And, of course, it was free.
Posted by JustinM at 10:04 AM

If the nearest Carl's is 3 miles away and you were walking, how did you get home and come back to Carl's by 10:30 am?

just sausage and biscuit? well maybe they are looking for a cage free supplier now that mcd is going that way.

You could put anything on that biscuit and I'd eat it. It's making me salivate!

I will make you one with dill and El Cholo's watery salsa.

Bastardo! You tricked me!

Not bad but does seem a little dry. Needs some kind of sauce or cheese. I got 2 for $1.00 using a coupon. Found an interesting article on qsrweb.com "Carl's Jr. adds Hardee's Made from Scratch Biscuits in SoCal".

I agree. If I had paid for it I would have asked for some kind of sauce, but being that it was free, I didn't want to.

The average person walks at about 3 miles an hour. That would make your 3 mile walk aprox. 40 min without stopping. You say you picked up a car AND a camera,which would add a few MORE minutes To your total time. My guess, according to your story, is that this would have taken you 45-50 minutes minimum to get back to CJ.This story does not add up. I hereby call your bluff and say that none of the above events ever took place. I will day however CJ biscuits are moist and delicious and worth every penny. Well played mickey D's ,Well played.

Any time you try to analyze my behavior by starting out "The average person..." your methodology is flawed. I walk at least 50% faster than that, about 4.5 miles per hour.

However, as I mentioned in the above comment - that you probably didn't read - this was not the Carl's Jr. closest to my home, it was the one closest to my parents', my childhood home.