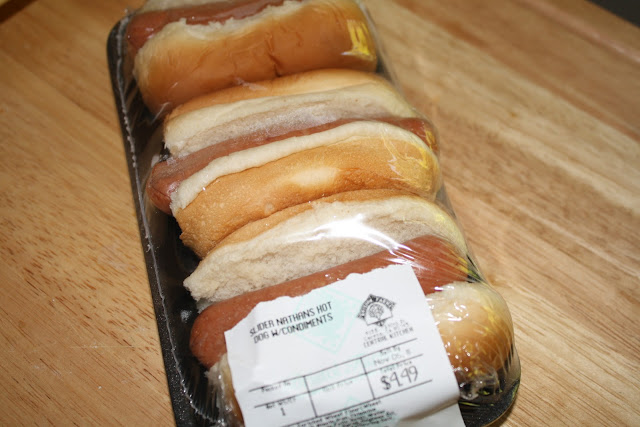 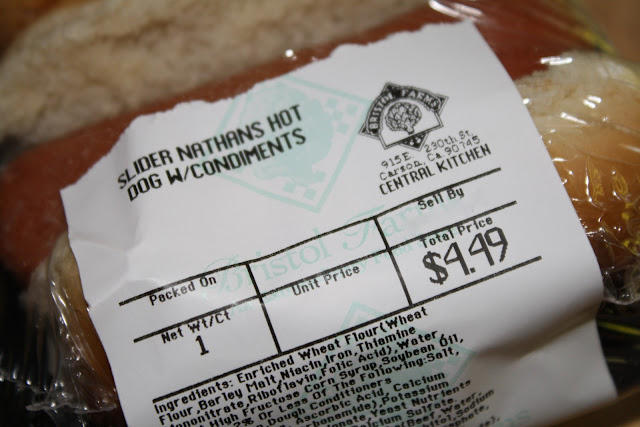 I saw these miniature Nathan's hot dogs at Bristol Farms and had to give them a try. 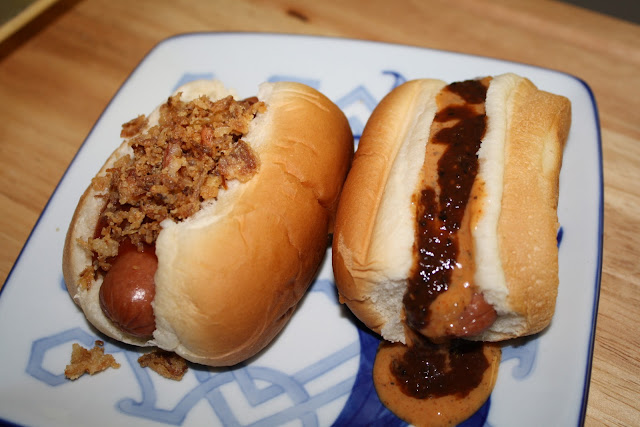 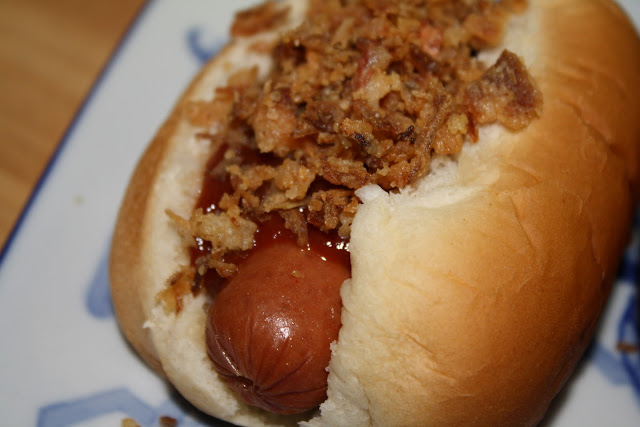 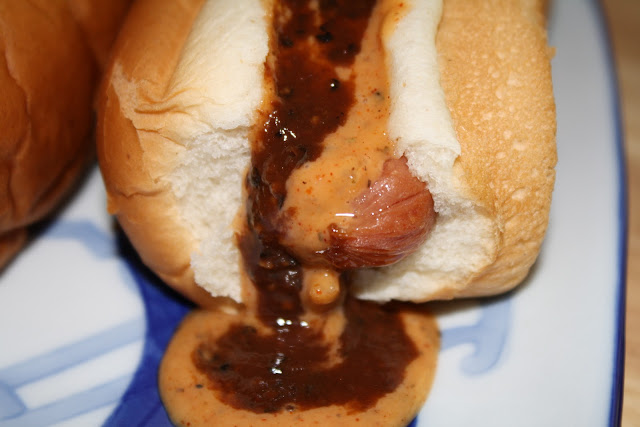 I cooked two of them at first and topped one with Gate's barbecue sauce and fried onion pieces and the other with A.1. cracked peppercorn sauce and remoulade. Damn they were both delicious. I have always liked Nathan's hot dogs but never thought they were anything special. But I loved these. So I cooked the third. 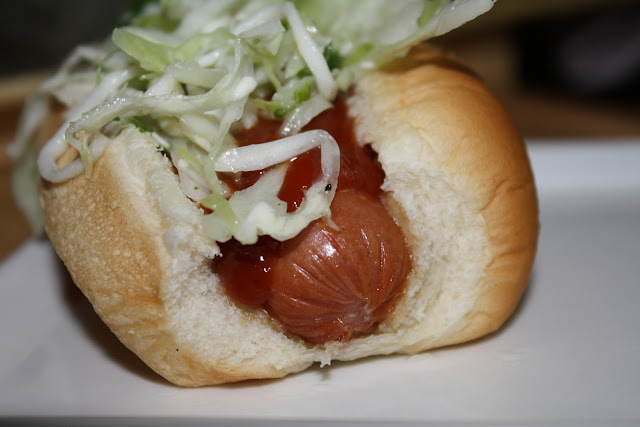 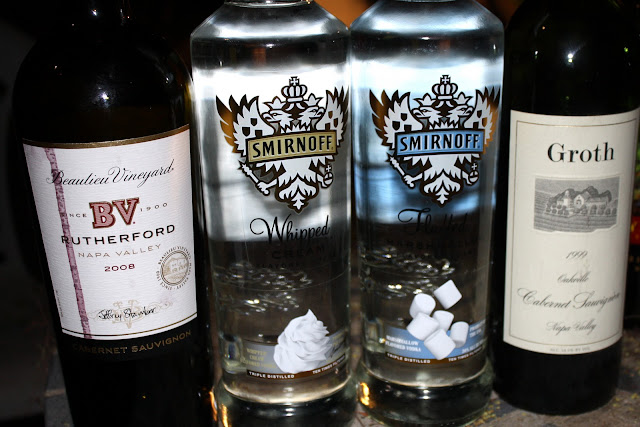 The most recent BV Rutherfod cab, a '99 Groth cab, Smirnoff whipped cream vodka and Smirnoff fluffed marshmallow vodka. Feel free to guess which two I tried on Friday evening and which two I would not try under any circumstances. 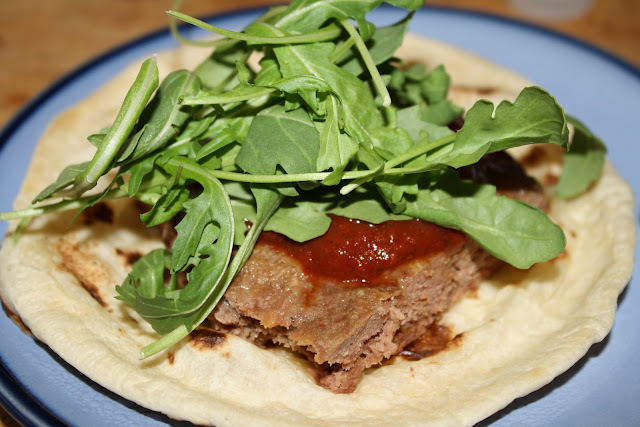 After the vodka wine drinking, I made myself a snack: the last piece of leftover meatloaf, with the last bit of Sir Kensington's ketchup, with arugula on pita bread. This hit the spot perfectly. 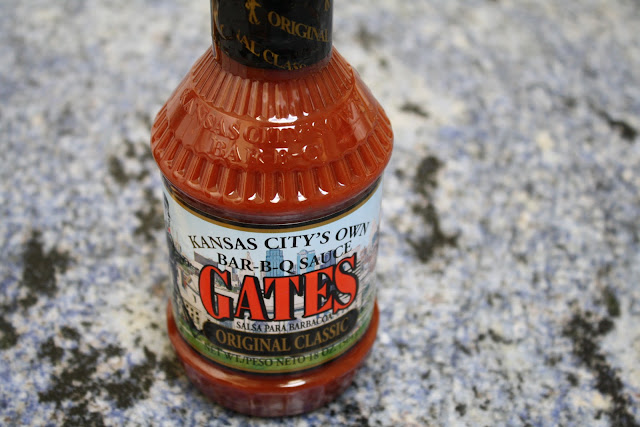 Here is a picture of my beloved Gate's barbecue sauce. I don't love it as much as Rudy's sauce, but it is my second-favorite tomato-based sauce in the country. 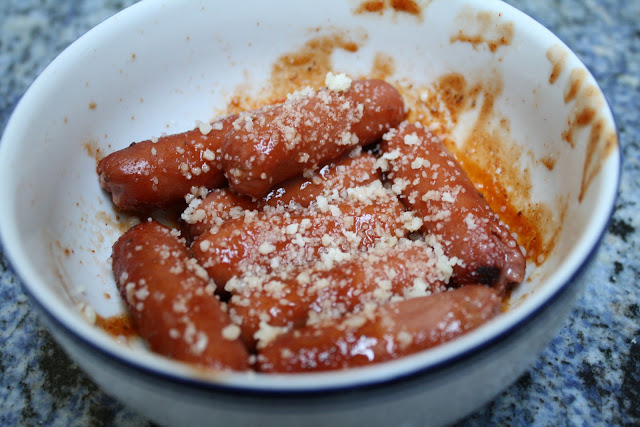 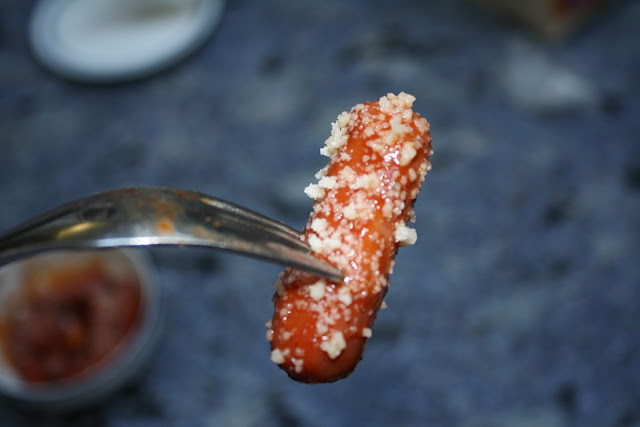 And Gate's is an integral part of a snack I've been making since high school (although I wasn't away of Gate's at the time and just used Bull's Eye, which kind of makes me queasy to think about): cocktail wieners in barbecue sauce, dusted with Parmesan cheese. Sometimes I still get a craving for these as a snack. 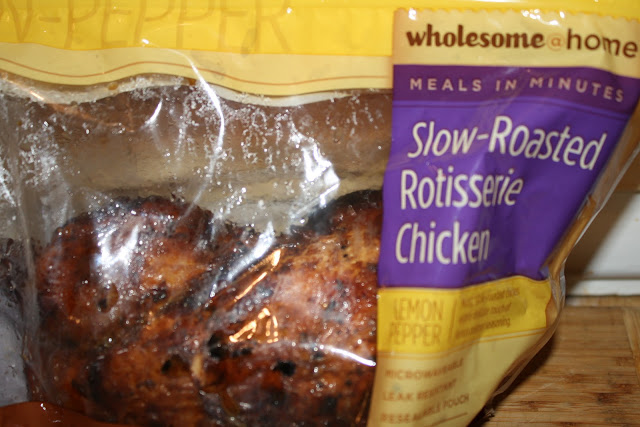 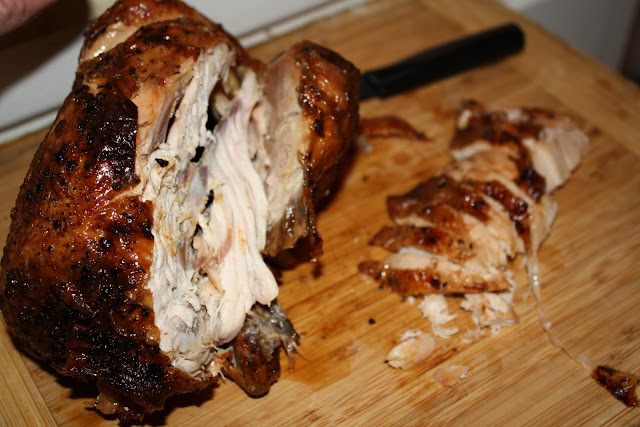 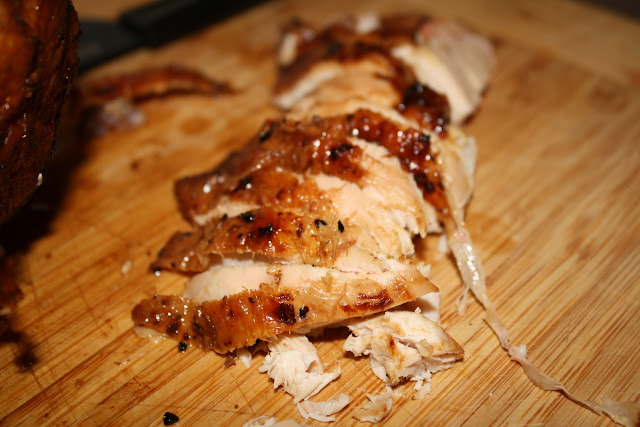 Because man cannot live entirely on mini wieners, we picked up a rotisserie chicken at Ralphs - only five bucks with a club card - in lemon pepper flavor. It's not the best roast chicken you'll ever have (there really is no way of knowing how long these things have been sitting out) but it is still good, and super easy, as it requires no work beyond carving it up. 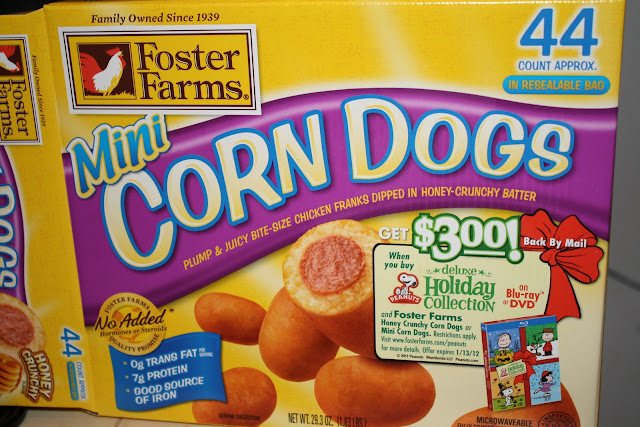 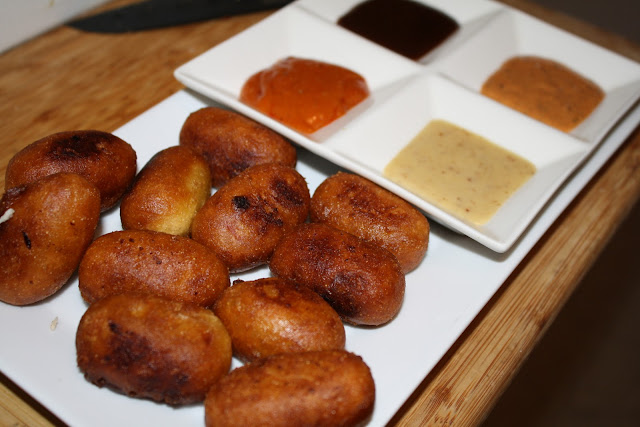 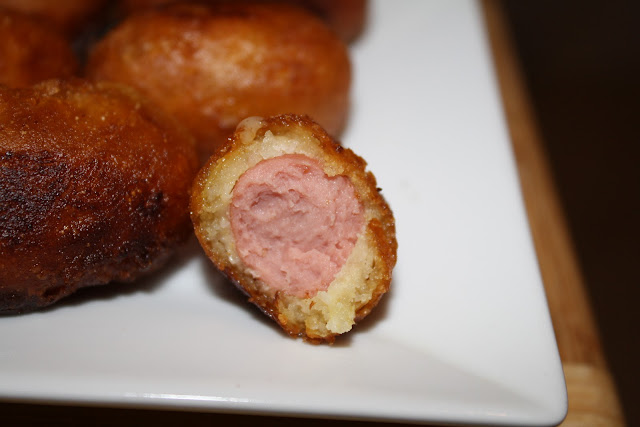 But I still had to return to some little wieners for watching football on Saturday evening, and I was craving a corn dog. (BTW, my dad has been calling Rick Neuheisel the "Steve Lavin of the gridiron" for the last two years; this was confirmed by the fact that both my friend Bryce and I said the other day "Since UCLA won their best game in years last Saturday, they will get killed by a mediocre Utah team this coming weekend." Final score: 31-6, Utah.)

I pan-fried the mini corn dogs and served them with four sauces: Thick Worcestershire, honey mustard, spicy garlic sauce and remoulade. The spicy garlic (from Buffalo Wild Wings) was the best. These were definitely a good football-watching snack. I heard my first Christmas song on the radio in October. I went to the mall on Halloween, entered through Macy's and was greeted with Christmas decorations everywhere. So, a Christmas-themed cookie before Thanksgiving? Why not, I guess. I've given up hope of actually being able to enjoy Thanksgiving without having Christmas crammed down my throat at the same time. 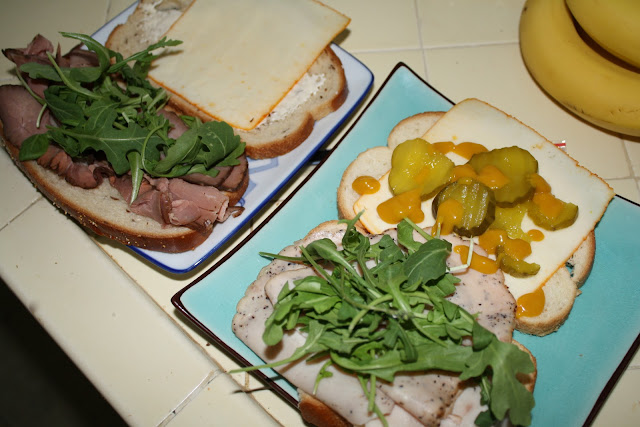 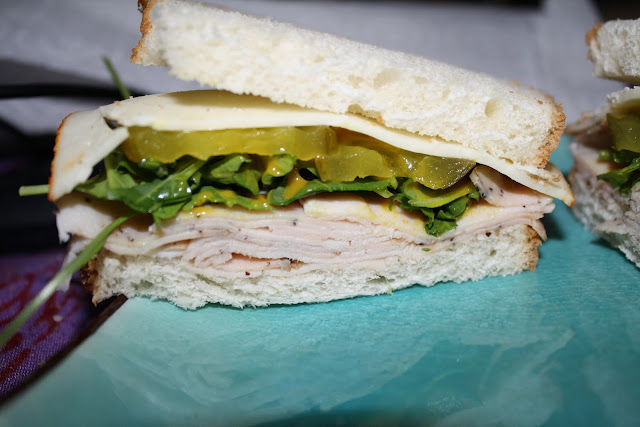 Sometimes a simple sandwich sounds satisfactory, so Sunday I made two. For myself: peppered turkey breast,  Muenster cheese, pickles, hot mustard and arugula on sourdough. For Elizabeth: roast beef, Muenster, mayonnaise and arugula on rye. 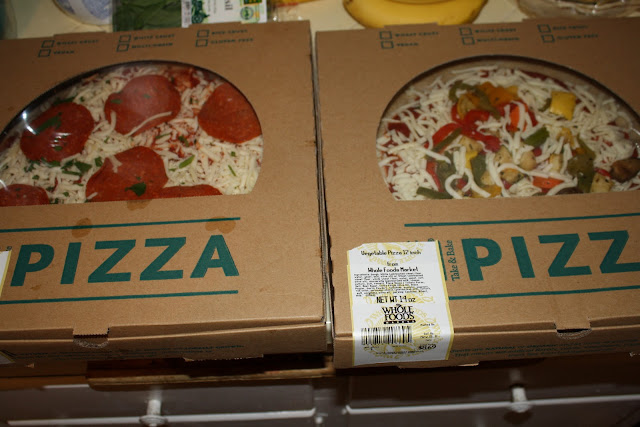 I've never been a fan of Whole Foods pizzas. I mean, they're still pizzas, so they're not bad... it's just that I don't find them to be very good. And at $8.99 each, they are not worth it. But on Sundays lately, Whole Foods has been offering a "buy one get one free" deal on their take-and-bake pizzas. Now two pies for $8.99... that's more like it; that's about what these are worth. So yesterday we picked up two pizzas: pepperoni and vegetable. 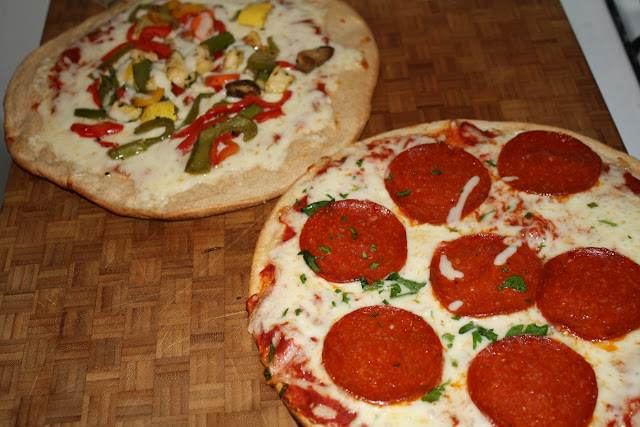 In a preheated oven, they cooked in just a few minutes. And, as is the case with every Whole Foods pizza I have ever had, it was acceptable. No more, no less. However, I was prepared: 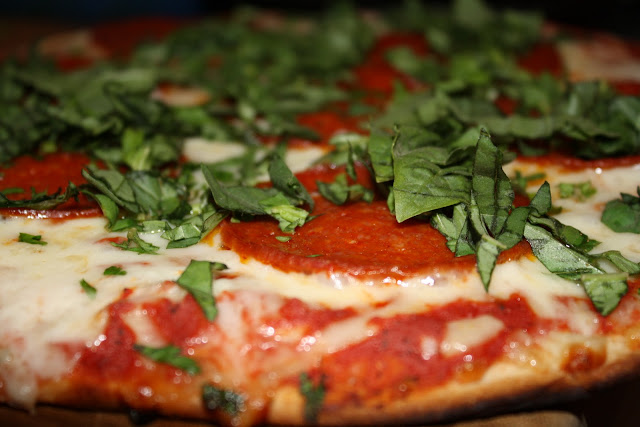 I put plenty of fresh basil on the pepperoni pie. Fresh herbs can rescue pretty much any pizza. 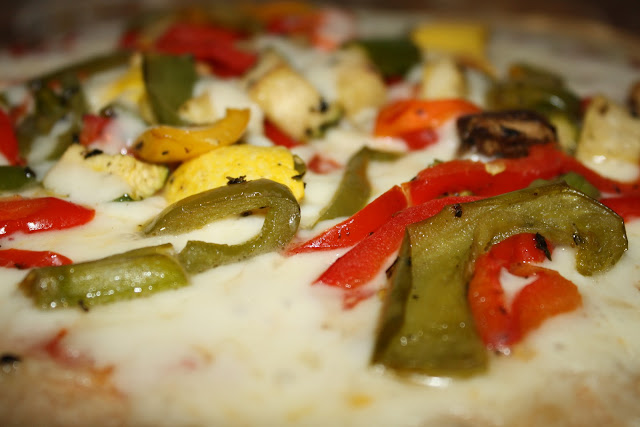 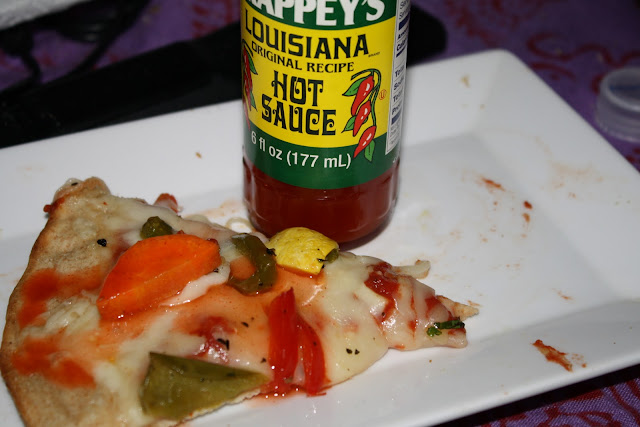 The vegetable pizza got carpet-bombed with Trappey's hot sauce. I still can't get over the fact that I made it through more than three decades in this world without discovering Trappey's.

And as with the last four Sundays, there was a sampling of Tim's beer. But more on that later in the week.
Posted by JustinM at 10:00 AM

You can enjoy Thanksgiving just as much. Christmas themed cookies are a delicious snack.

I have to say the Whole Foods pizzas were not my favorite. I prefer Trader Joe's. I also don't understand why they put carrot on the vegetable pizza. Just weird.

I started to write that I'd never had carrots on a pizza before, but then I remember that I have... shredded carrots. These were chunks and, while I love carrots, they were distracting.

I'd love to try the Gate's as a dip - for some very high-quality rippled potato chips with maybe some Parmesan dust as well.

If you're going make jokes like that, at least make the effort to spell her name correctly.

Me too. I sometimes make it myself, but since I won that raffle and the gift card I figured I might as well buy the sauce.

There is something special about a simple sandwich and you really do make a good-looking Jurgensen’s replica. I’ll take two… and a glass from that bottle with the lovely drip down the label… and a glass from ’99, too.

And Hilary can try the flavored vodkas to go with that Bud Lite Lime stuff.

JustinM, all I got to say, is that too bad/ or thank god you are not a woman because god knows what kinds of pregnancy cravings you would have.