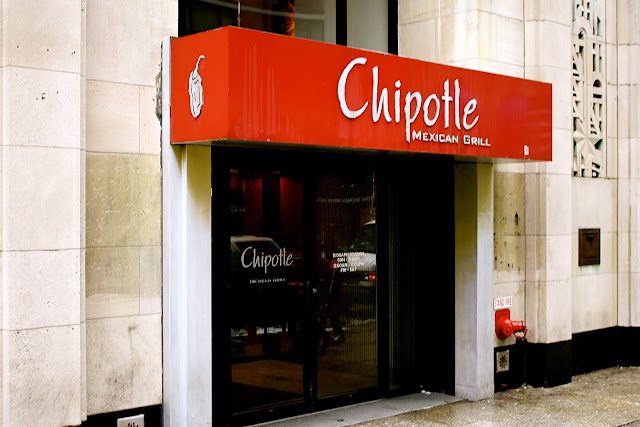 Remember Ralph Fiennes last words in In Bruges? "You've got to stick to your principles."

I don't much care for Chipotle. I won't be going into any reasons save one: every item I have ever had from there has been bland. It has not mattered whether I received a just-put-out batch of meat, or whether I doused whatever item I ordered in salsa. I've had tacos and burritos and never once enjoyed my food.

But Elizabeth likes the place. (Actually, quite a few of my friends like the place.) A couple of years ago we received a buy-one-get-one-free coupon (which we seemed to get every two or three months) and I said we could go. But the nearest Chipotle was a few miles away and there were many closer restaurants that I preferred - to say nothing of two taco trucks serving food on a completely different level than Chipotle  - so we never got around to it and the coupon expired. And I announced that I had no intention of visiting Chipotle and paying full price.

"Aw, man," Elizabeth said. "You were just waiting for the coupon to expire!"

I couldn't really argue with her, because she was probably right. So I made a promise: "Next time we get one of these coupons, we will definitely go."

Until the other day.

We live in Brooklyn now and there is a Chipotle down the street. And just like in Pasadena, there are still many restaurants I prefer between our home and Chipotle, even though the distance is now two blocks instead of three miles. So we've haven't visited it in the 10 months we've been here. 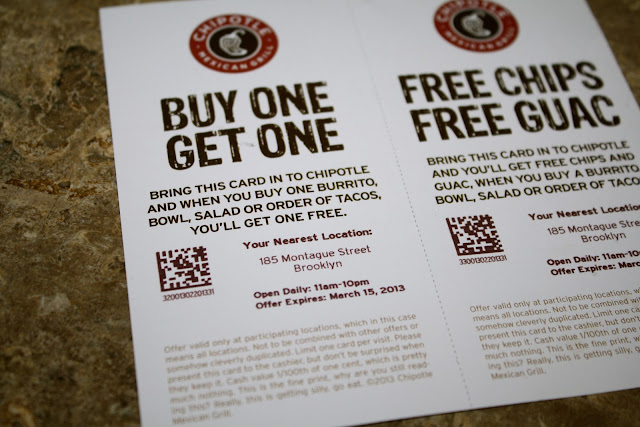 But then that coupon arrived and was sitting on the table, almost challenging me. I don't think Elizabeth even remembered my promise from 2011 but that didn't matter: I did. You've got to stick to your principles. So the other night I told her I would meet her at the subway station and buy her Chipotle for dinner.

There was a long line inside but I have to give them their due, they sped things along very well. I thought we were looking at a 20-minute wait; it took about seven. 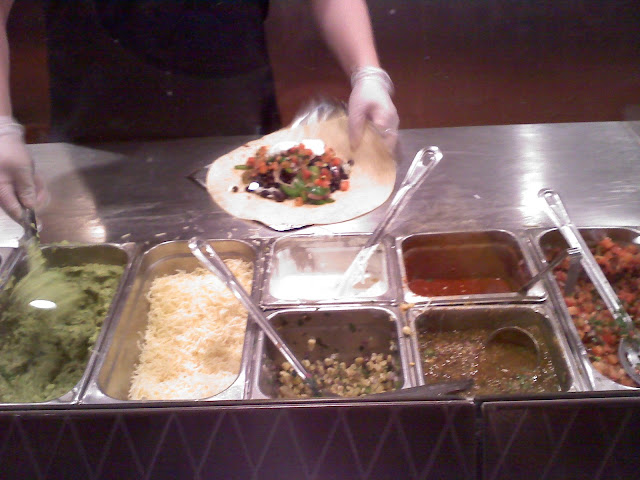 I used my cell phone to snap a picture of the man assembling Elizabeth's burrito. If you've never been to a Chipotle, you can get the idea from this: all the ingredients are in a line in front of you; you instruct the employee what you want on your burrito/taco/salad.

With the coupon, the total for two burritos and chips & salsa was $8.50. Not too shabby. 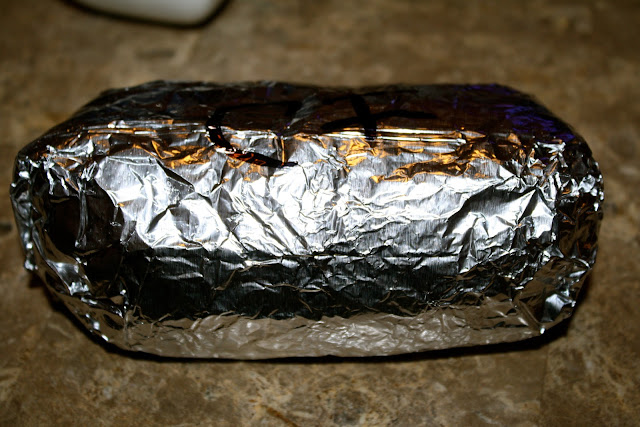 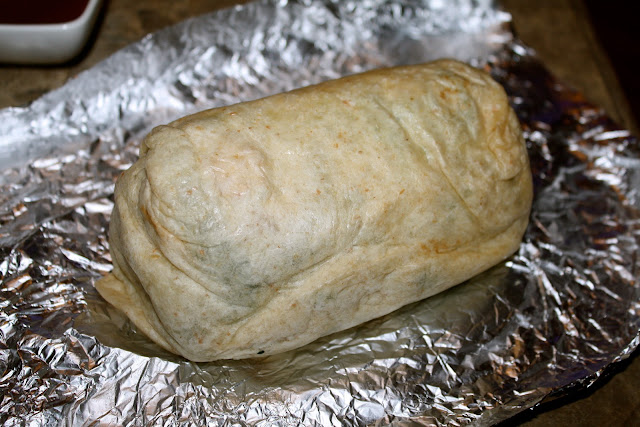 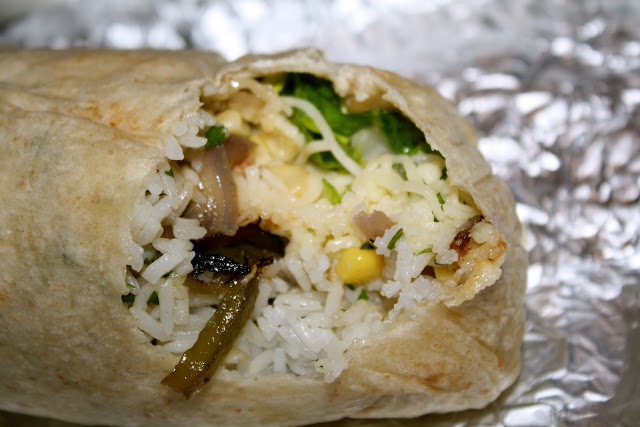 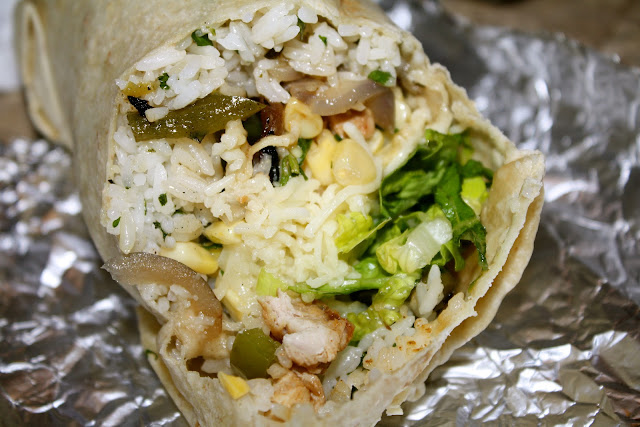 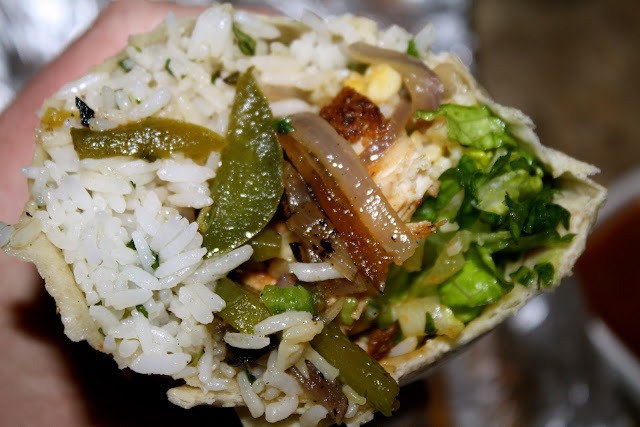 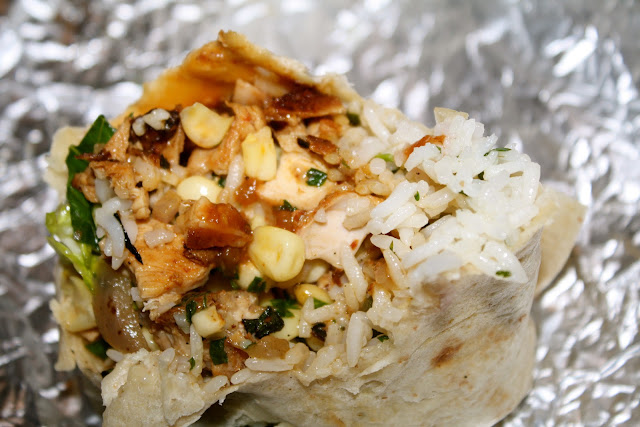 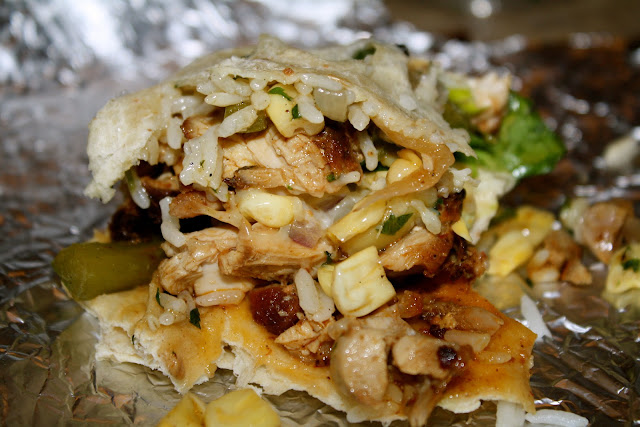 Back at home I unwrapped my burrito and dug in. I selected chicken, fajita vegetables, cilantro-lime rice, cheese, lettuce, and roasted chili-corn salsa.

I had not eaten anything from Chipotle since 2000 (when I was 21 and visited Chipotle simply because they serve alcohol). It was better than I remembered, the ingredients were fresher, but it was still completely bland. The chicken, which claims to be marinated overnight in "smoky, spicy chipotle pepper adobo" was neither smoky nor spicy. I detected no chipotle flavor.

The cilantro-lime rice was delicious. I was impressed with how moist and flavorful it was, though I laughed at the fact that the ingredient in my burrito most likely to be flavorless was instead the best.

I shook Trappey's hot sauce over each bite, which made it palatable, but nothing I ever plan to get again. I can understand the appeal of getting something like this on a lunch break (if Chipotle is close by and there is no better taco/burrito joint), but there is just no reason for me to ever visit the place for dinner. At full price this meal would have been about fifteen bucks: not expensive by any means, but for less money and perhaps twenty minutes of effort I can make a much better burrito at home. 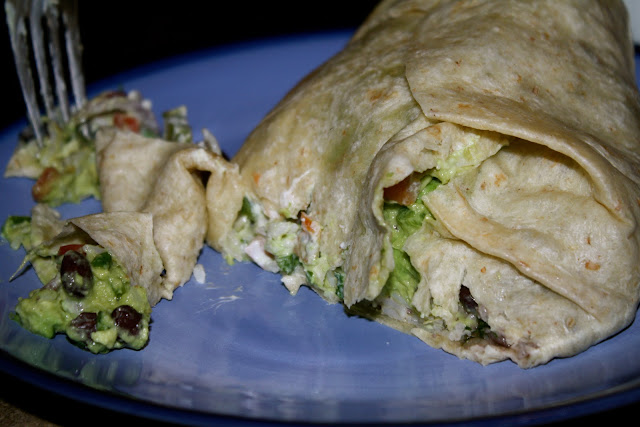 Fortunately, Elizabeth liked her burrito much more than I did: she got a veggie burrito with beans, guacamole, lettuce, sour cream and salsa. 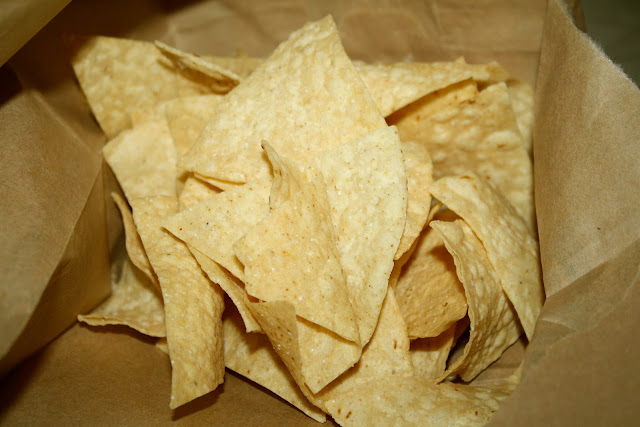 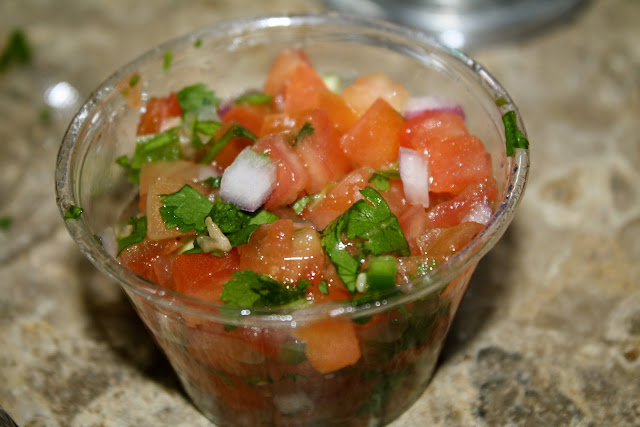 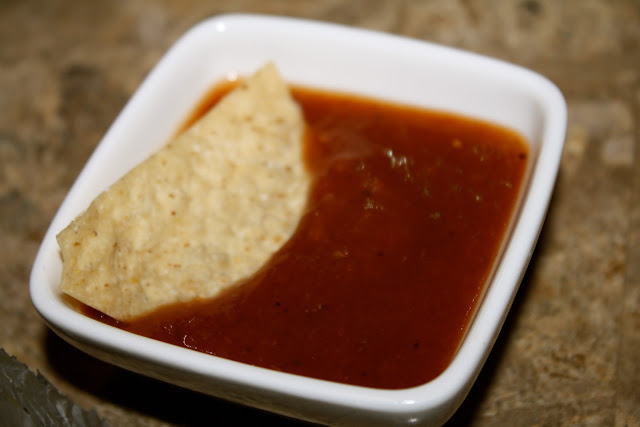 The chips were quite good: crispy, light and salty. I did not enjoy the salsa - that probably doesn't surprise you if you know how much I dislike tomato chunks - so I used that Trader Joe's tomatillo and roasted chili salsa that I wrote about the other day. 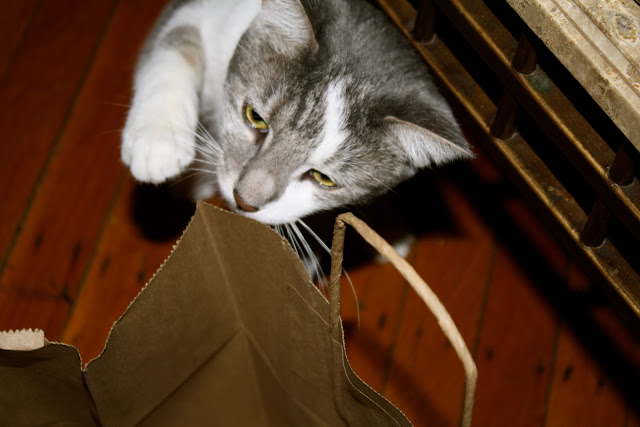 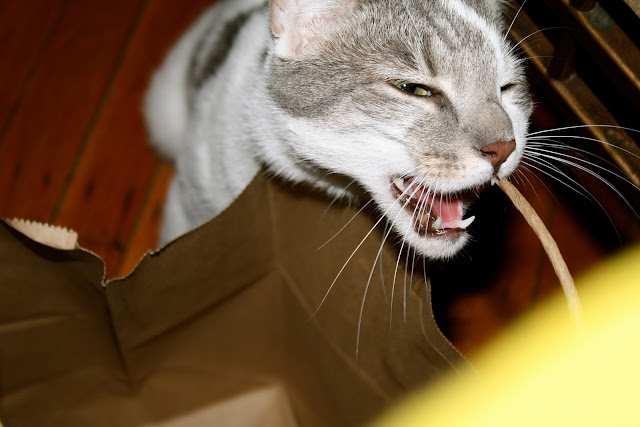 Hawkeye loves all bags with handles - he tries to chew them off. The heavy-duty paper sacks from Chipotle provided him with plenty of entertainment, though he got tired when he realized he couldn't chew off the twine handle and eventually he knocked it onto its side and crawled inside.

I can't think of any place in Brooklyn where we have gotten dinner for two and received change back from a ten, so I can't really complain too much about this meal. And to be honest, if we get another one of those coupons one day and Elizabeth wants to return to Chipotle, I will do it. There are a lot of chains I hate, and upon returning after all these years, I realize that Chipotle isn't one of them. But I don't like it very much either and if I never eat there again, that will be just fine with me.
Posted by JustinM at 10:00 AM

I agree with your take on Chipotle.

On the few times I have eaten there, I am always surprised how bland the food is.

For what it's worth, per the Serious Eats article, only the braised meats (the carnitas and barbacoa) are cooked offsite. The chicken and steak are cooked on a flat top in-house.

That's a great catch, Gabrielle. I will remove that sentence as I don't want to mislead anyone as to why the chicken wasn't good. (Although that doesn't make me feel any better about it: if it's cooked in-house, there is even less reason for it to be so bland.)

Agreed, chicken that's "marinated overnight" and then cooked fresh should be somewhat tasty. Most of the people I know (myself included) like Chipotle for their guacamole, so if I didn't like avocado, I don't think I'd see the appeal either.

A Chipotle went in across the street from my office about a year ago. I still haven't been. The line is always out the door. I just don't get it the draw. It's like Subway for burritos.

Bekah, it sounds to me like you get the draw perfectly. It is inexpensive, inoffensive, unchallenging food. If there is a halfway decent taco stand/sandwich shop nearby, you will most likely get better tacos/sandwiches. But you also might get worse. With Chipotle/Subway, you know exactly what you're getting.

During his totalitarian reign, Justin would offer the occasional concession to the proletariat; "The next time we have a coupon, we can go," he declared, thereby appeasing the serfs, peasants, and wenches.

Try a Burrito Bowl with Barbacoa if there is a next time….the tortilla kills it for me at these make your own burrito line-up restaurants…also Subway is to Moes what Chipotle is to …..I'll finish this later

True, you do know exactly what you are getting.

I'll stick with a truck down the street. Doubt they have lengua at Chipolte. ;)

The burritos look nice and plump, at least.

Hawkeye should be in all your posts.

I'll only include him when he does something related to the food that I think is funny. Most of the time he's just trying to steal our food, sometimes right off our plates.

what a cool cat!

For a while, a few years ago, I was a semi-regular Chipotle customer.
I would get the chicken burrito bowl (I'd ask for a bean-heavy mix with rice) and douse it with Tabasco jalapeno sauce which they always had on hand.
I found it very satisfying in its own way.
I haven't had one in about two years now and don't feel that it has left a big hole in my life. (My new obsession - El Arco Iris in Highland Park).

Sounds like you're still in 6th grade. At least you write at the appropriate level.

Do you know how you got on the mailing list for the coupons? I've never seen one of those before and I'd like to get one, if possible.