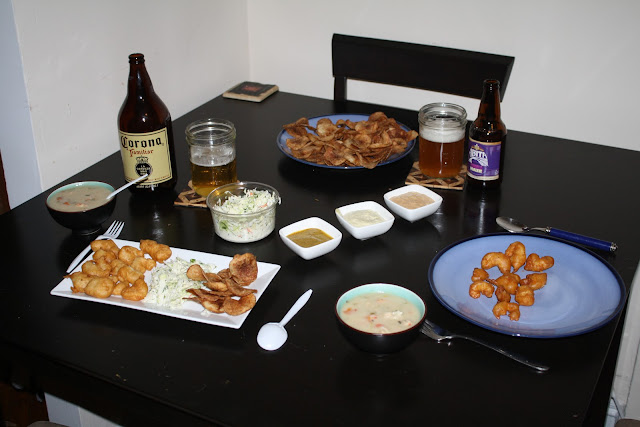 Elizabeth and I don't do anything fancy for Valentine's Day and we have never once gone out for dinner. If you enjoy going out on that day, more power to you. But it's not for us. Last year I got us cheesesteaks from Philly's Best. Two years ago we went to Olvera Street for churros. Four years ago we got McDonald's and watched The Princess Bride. You get the idea.

And we decided we're not doing anything this year, too. But yesterday was Mardi Gras and I had an idea: why not take 100% of the effort that might normally go towards Valentine's Day (which, as I pointed out, isn't really all that much) and direct it towards a Mardi Gras dinner? Beer, fried seafood, trading beads for flashes. Doesn't that sound better? 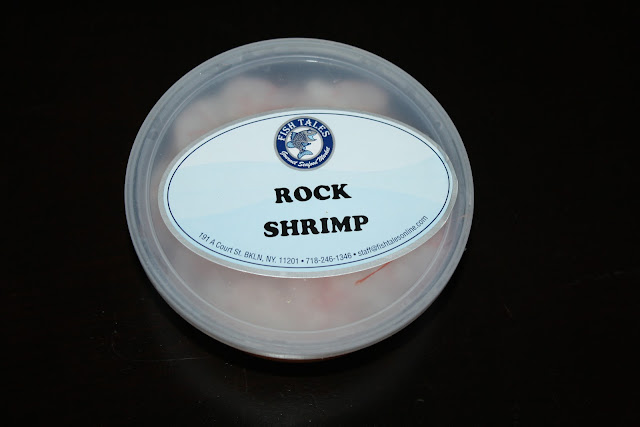 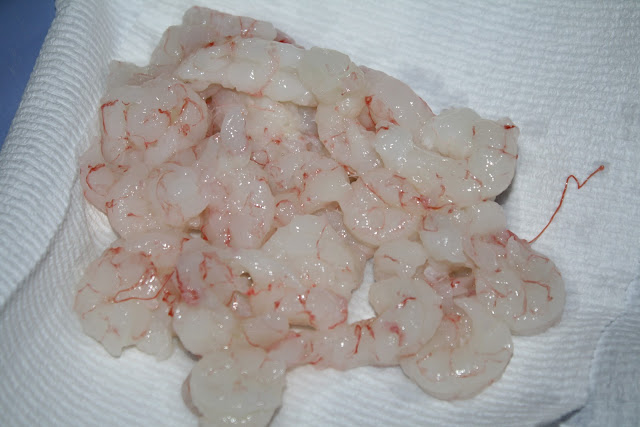 I got some rock shrimp at Fish Tales and defrosted them. 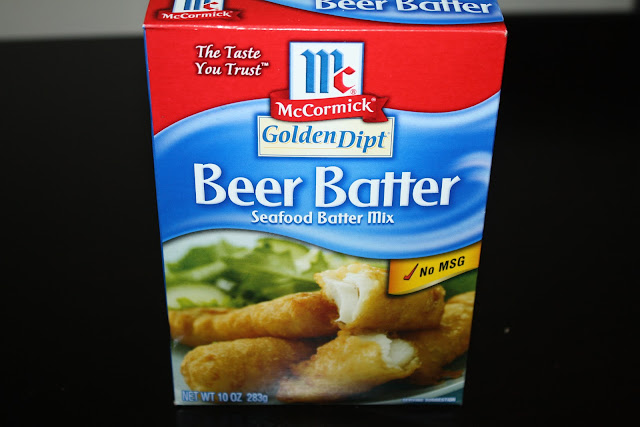 And some beer batter. 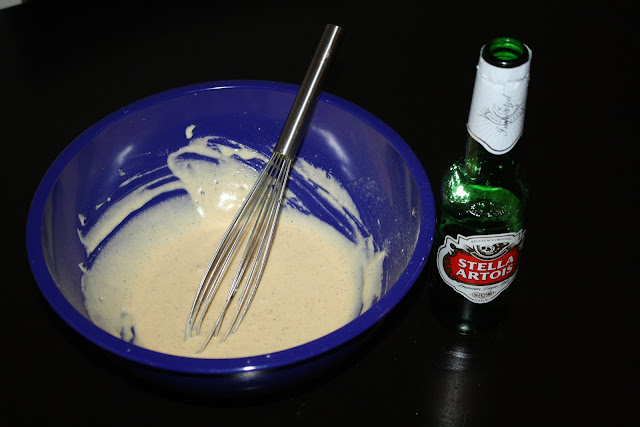 Elizabeth's parents gave me one of those "Beers of the World" packs for Christmas, and I drank most of them, but I'm not a fan of Stella. So it's been sitting in our fridge for six weeks. I decided this would be a good use for it. I coated the rock shrimp with a pinch of excess batter, dipped them into the beer batter, then dunked them in the fryer. 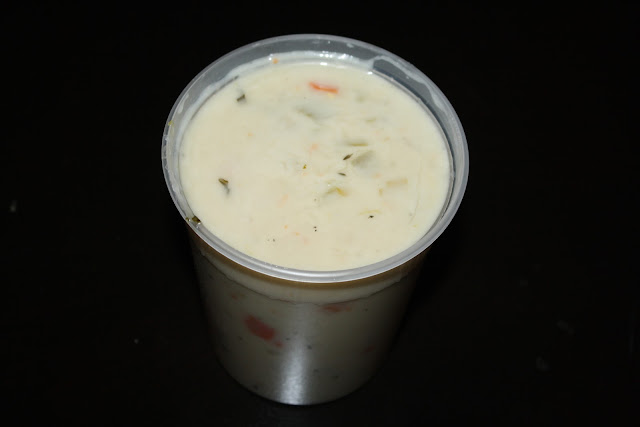 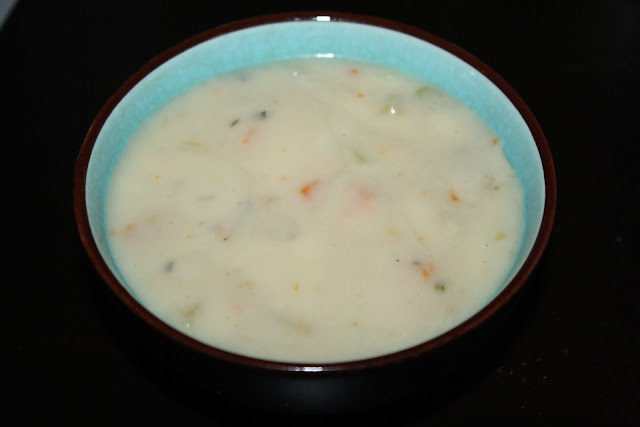 I got shrimp and corn chowder from the deli across the street. 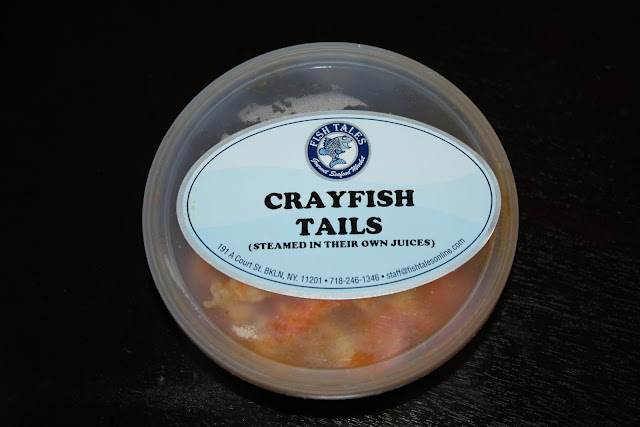 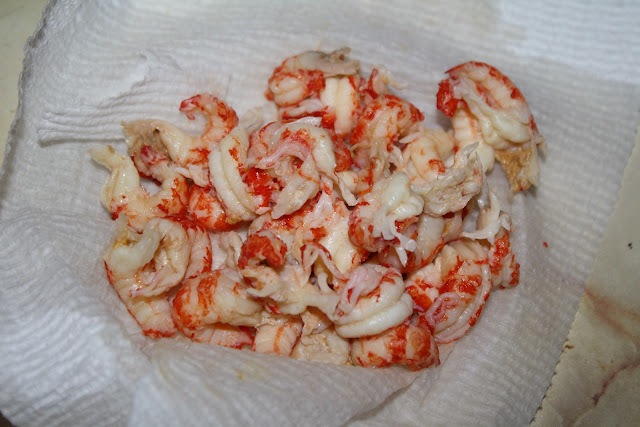 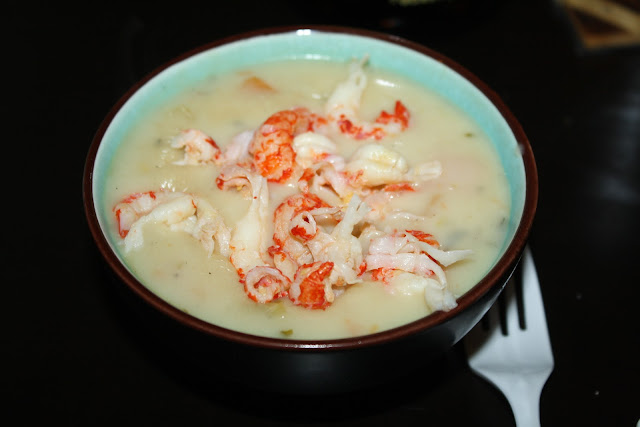 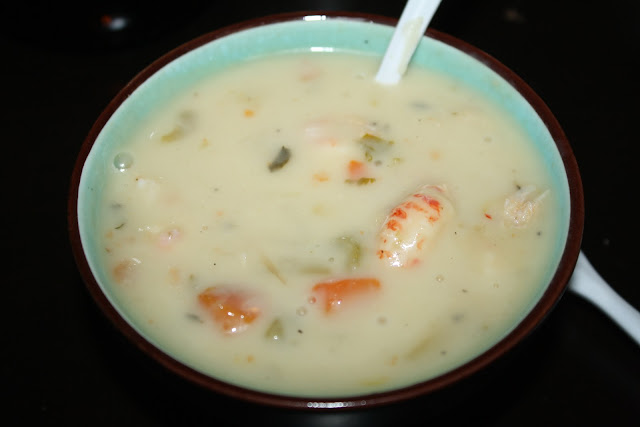 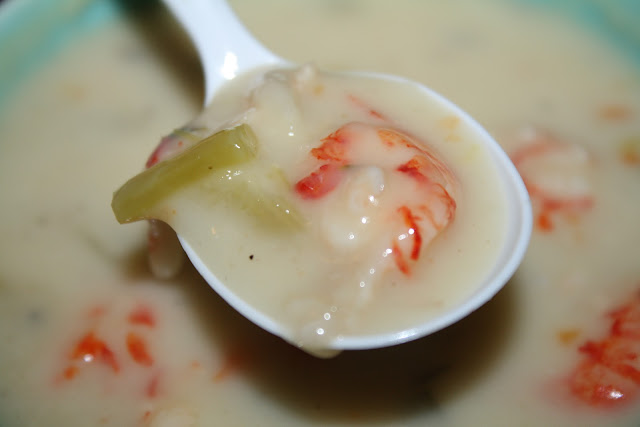 I added them to the soup to create my own shrimp & crawfish corn chowder. This was outstanding. There are plenty of leftovers and I'm probably going to eat them for breakfast this morning once I finish writing this. 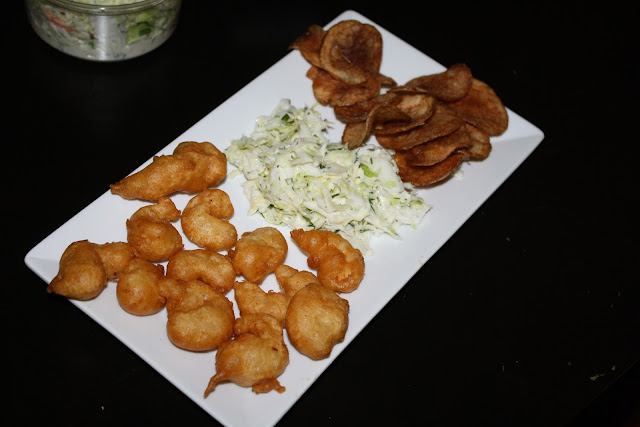 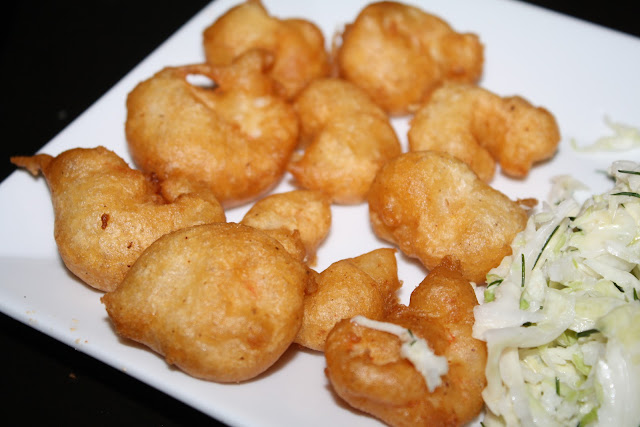 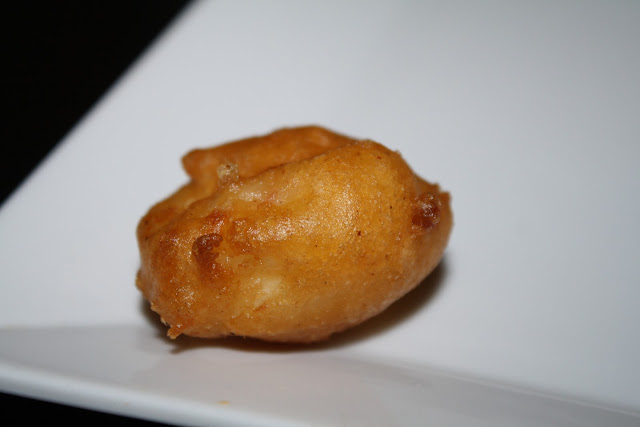 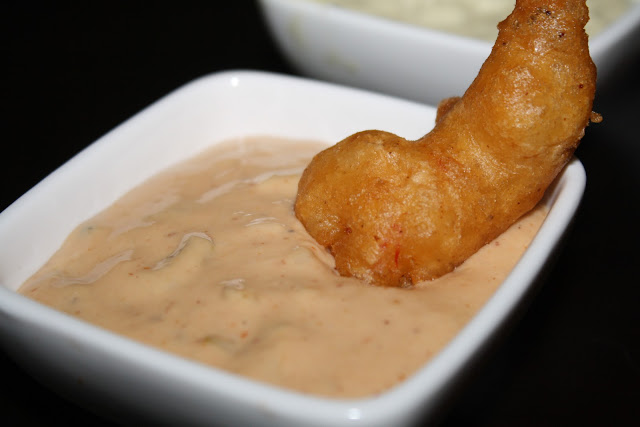 The shrimp fried up a beautiful golden brown, crispy on the exterior with juicy, meaty shrimp inside. I don't use rock shrimp very frequently - actually, I don't know if I've ever made a recipe with them on this blog. I am usually satisfied with Trader Joe's Red Argentinian Shrimp, which are delicious and about half the price of most rock shrimp. But damn, I have to admit, rock shrimp are a little better. 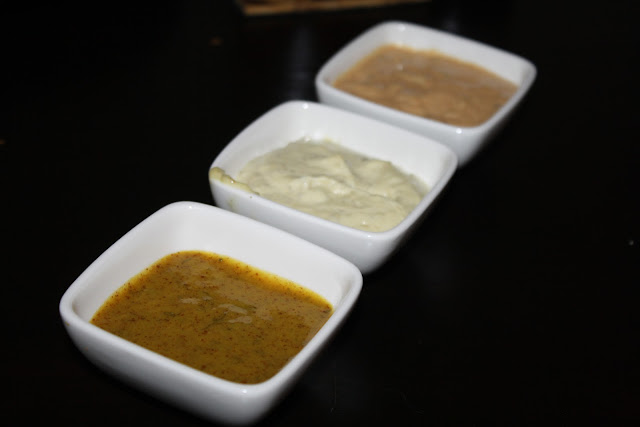 Wanna know what kind of sauces I used? Okay. 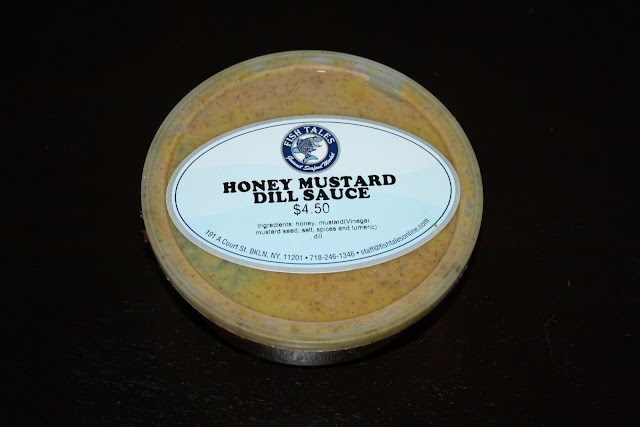 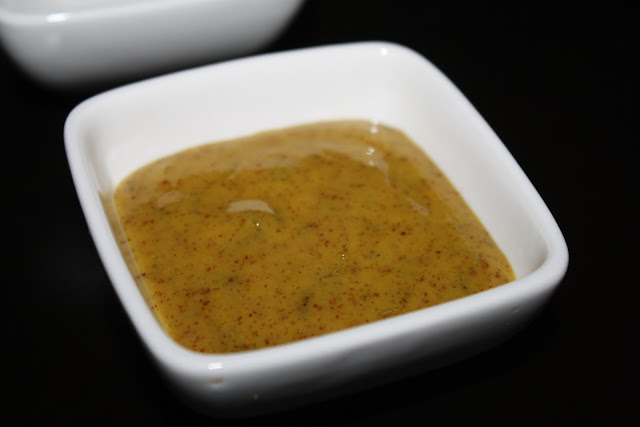 This Honey Mustard Dill Sauce was fantastic. Do you ever taste something and think Wow, this reminds me of something I've had before in my life.... only you can't quite remember what? I've definitely eaten a honey mustard sauce like this before. I can remember tasting it on chicken tenders. I just don't know where. I keep thinking of The Only Place In Town in Sierra Madre, or the Pearl Street Pub in Boulder - both places where once upon a time I consumed lots of chicken tenders - but I can't be sure.

Like most things at Fish Tales, this sauce ain't cheap - $4.50 for a small container that was only about 3/4 full. But I am probably going to keep buying these until I remember where I tasted this flavor. (Or, more likely, until I get sick of it.) 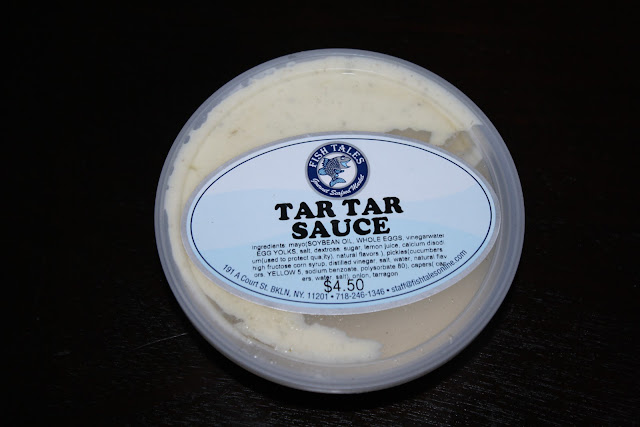 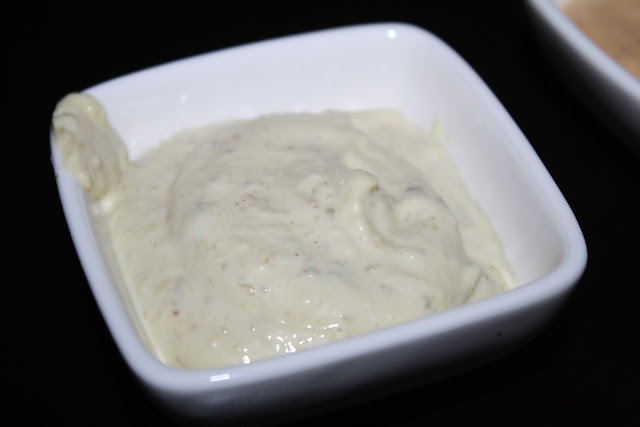 Fish Tales tartar sauce is good, but it's not great. I've picked up tartar sauce from a few places in NYC over the last year, trying to find the definitive one for when I make seafood, but I have not found any as good as the tartar sauce I love at the Crab Cooker in Newport Beach. But I will keep looking. 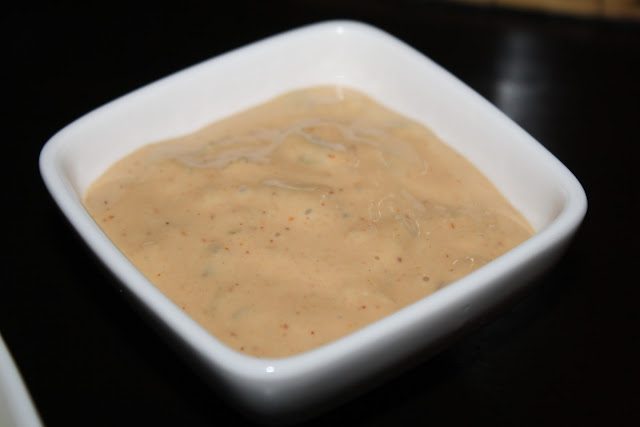 I made a simple remoulade: mustard, mayo, relish, hot sauce, lemon juice, horseradish. It was just okay, but then again I didn't put much effort into it. 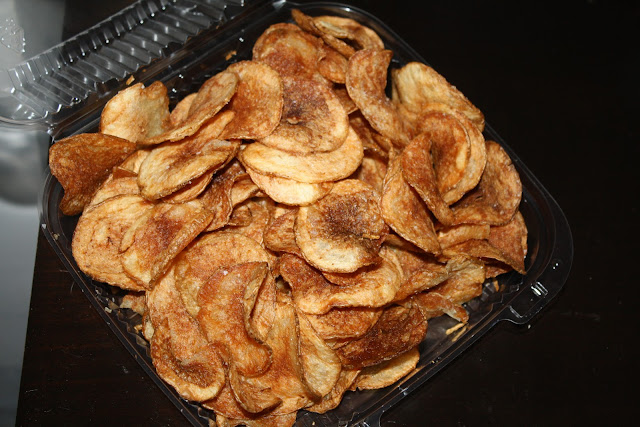 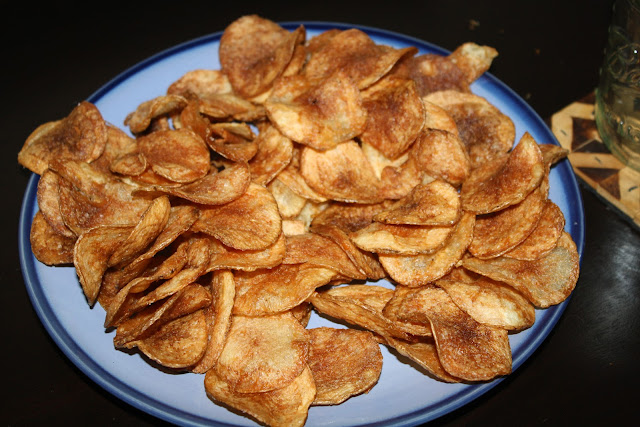 Potato chips sounded better than fries, so I got some of those awesome homemade chips from Cobblestone foods and heated them in the oven for five minutes right before serving. They went perfectly with the honey mustard/dill sauce. 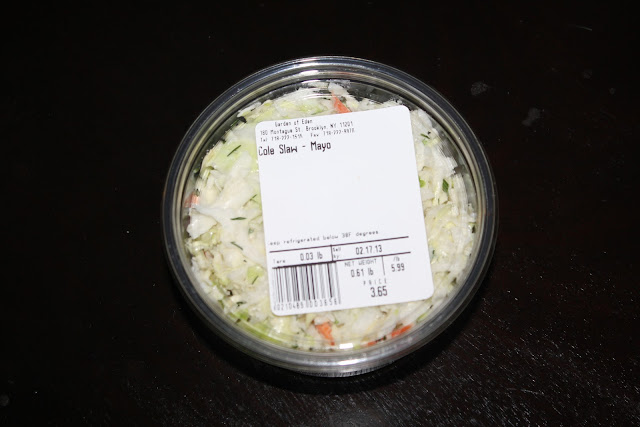 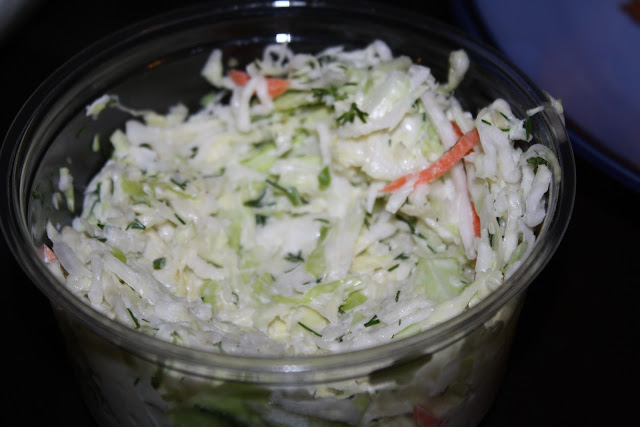 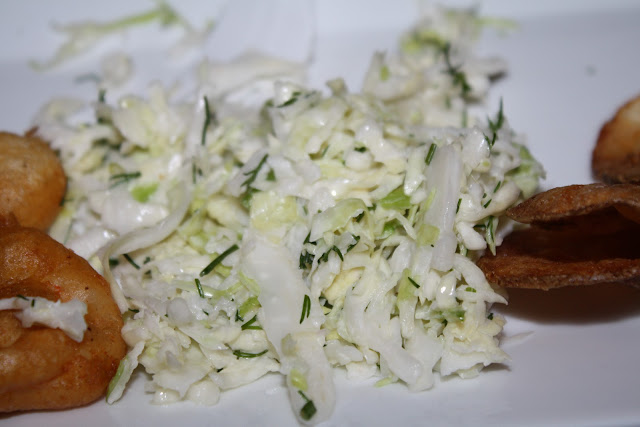 I got slaw at the market down the street. I enjoy this slaw because they add dill and go light on the mayo. (Fish Tales has slaw that is sometimes good, but sometimes so heavy with anise that it's impossible for me to eat, so I rarely get it there.) 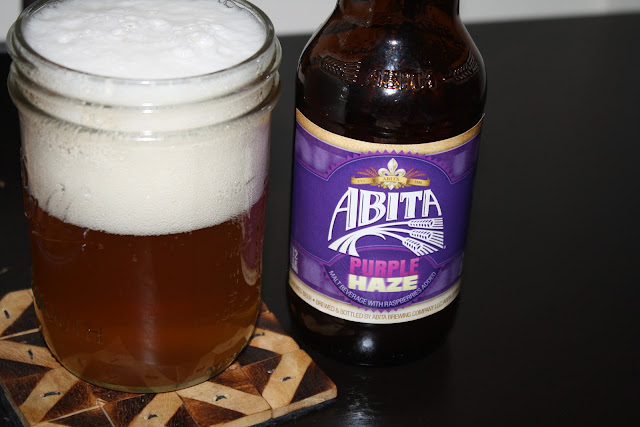 I got an Abita Purple Haze for Elizabeth. 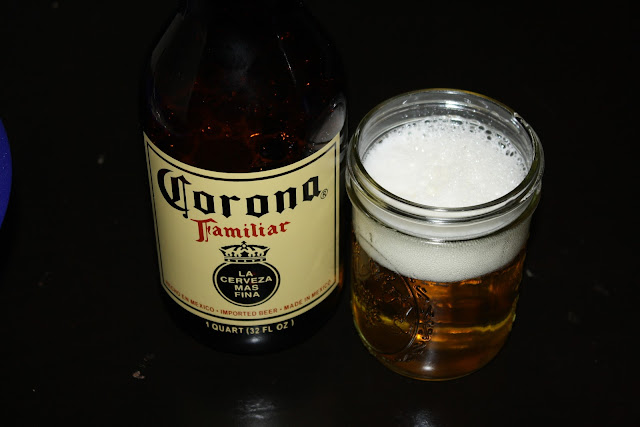 I wanted an Abita Turbodog but, despite looking in half a dozen different places, I could not find any. Three places carried Abita beers, but none of them had Turbodog. One place claimed that they carry it normally but sold out for the Super Bowl. (I guess they don't get their stock replenished more than every ten days?)

So I got a 32 ounce bottle of Corona Familiar. It doesn't really have anything to do with Mardi Gras other than excessiveness. Which was cool with me.

This whole dinner was great. And now tomorrow for Valentine's Day we can just get McDonald's again.
Posted by JustinM at 10:35 AM

im a str8 dude pp but damn id marry u

Unfortunately, unless you're Mike Trout, that does nothing for me.