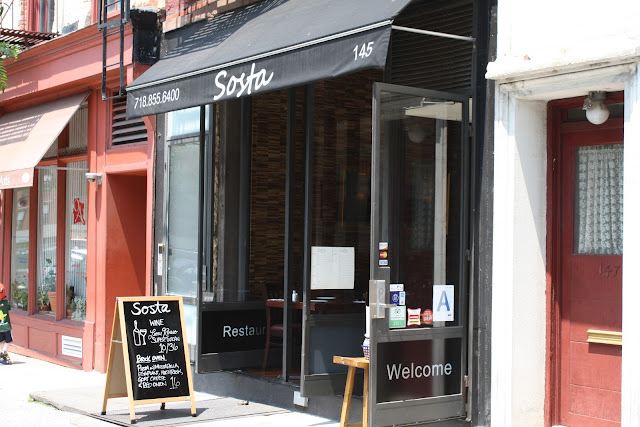 Do you ever visit a place that you really want to like but just can't? I love the way Sosta looks from the outside, with big windows, a dark interior, and in the back of the house a flame dancing in a pizza oven. Elizabeth and I stopped in for dinner one night, hoping the inviting appearance would carry over to the rest of the experience. 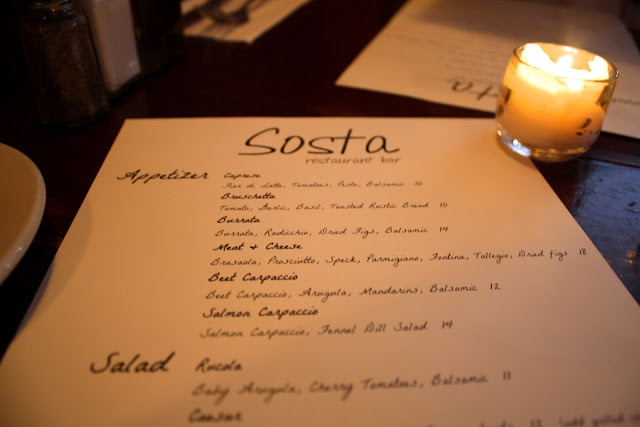 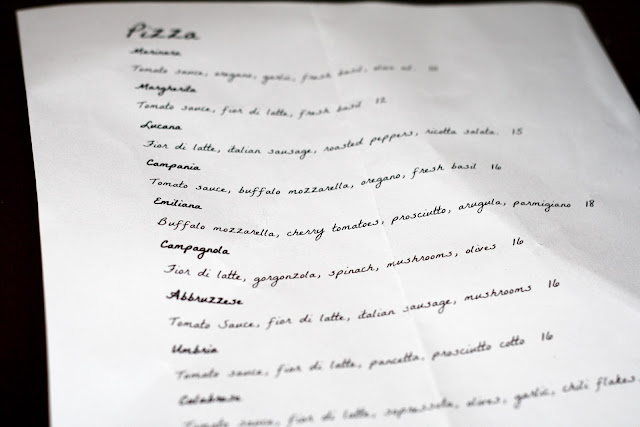 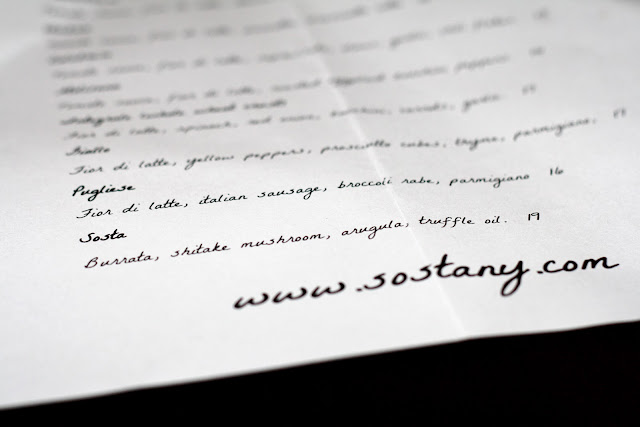 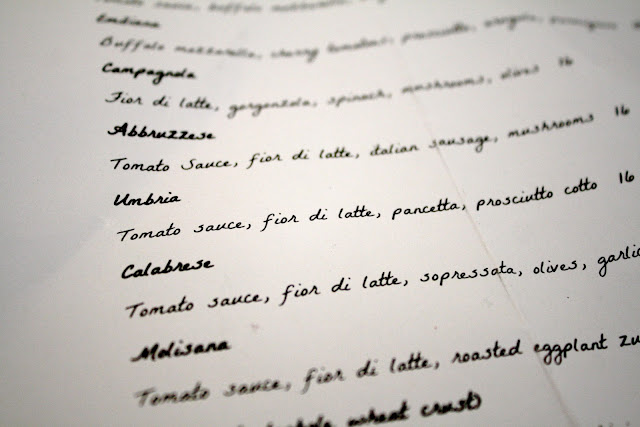 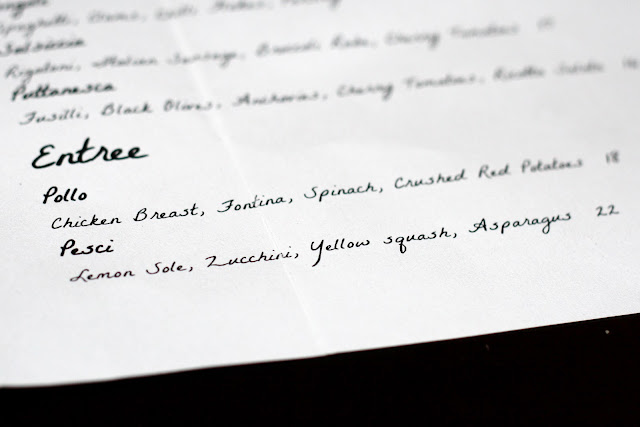 There were three things on the menu that looked good to me, but I'd seen the pizza oven and that's what my body was wanting. 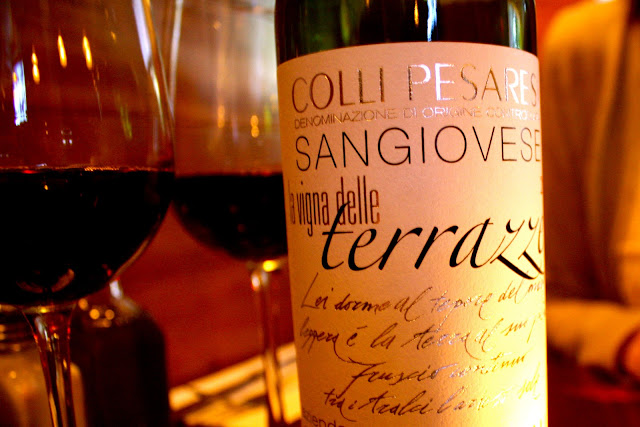 We got a bottle of Sangiovese. It was okay. It wasn't too expensive so I can't really complain, but I should have gone for the Super Tuscan instead. I considered getting a glass of that after we finished the Sangiovese, but... well, more on that in a minute. 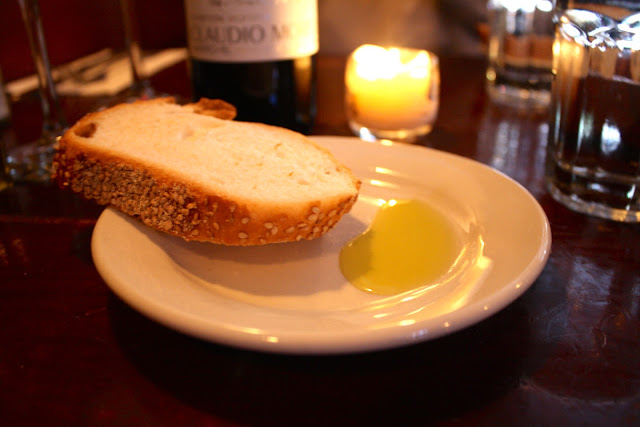 The bread was good and the olive oil was very good. I would have liked more of it, but... well, more on that in a minute, too. 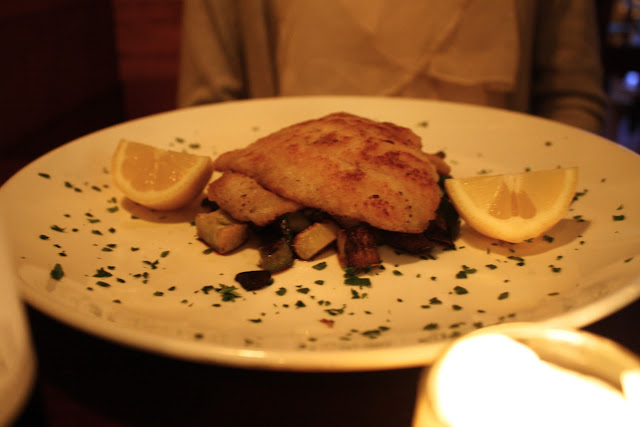 Elizabeth had the lemon sole on a bed of vegetables. She gave me a taste and I thought it was decent if a little dry. But this was her dish and she was pleased with it. 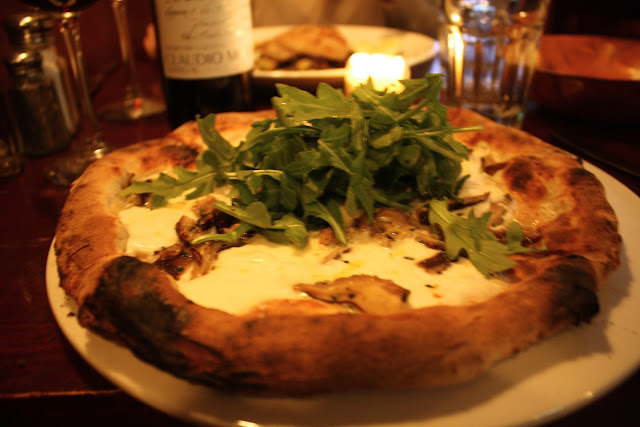 I had the eponymous pizza: burrata, shitake mushrooms, and arugula and truffle oil. It was very tasty, the creamy burrata playing off of the peppery greens and savory oil. I would have liked a slightly larger pie (I guess I assumed it would be when I saw the $19 price tag) but this was very good.

What was not good, what was in fact downright lousy, was the service. We saw our server twice: when she took our order and when she brought our check. (Our other encounters were with the busboy, who delivered our food and refilled our water.) I would have liked another glass of wine and some additional bread, as I mentioned, but there was no one to ask.

"Sorry I've been ignoring you," the server said when she dropped off the check. I never know what to do with such apologies. Should I be grateful that she acknowledged she gave us poor service and apologized? Or should I get annoyed at the fact that she was aware that she was "ignoring" (her word) us throughout our meal and still made no further effort?

I took the third option: go have an after-dinner drink somewhere else and make a mental note never to return to Sosta. The food was good but there are plenty of other places where we can have an equally good dinner for the same price (almost $100) and also receive good service.
Posted by JustinM at 10:30 AM

Hey Man, I just found your blog and I love it (is that weird). Just sayin'. Best, cupie

I recently found your blog and I lovee it too ! Not to be a creep but ..I read back threw allll your reviews! We have a very similar taste in food, you should do more fast food reviews/junk though, because I live in Canada so a lot of the stuff you review I cant try.

Do you read Grub Grade and Impulsive Buy? Those are great websites with multiple writers; they get around to almost all the fast food items.

I'm just one guy and this is more a journal of the things I eat than a review website. Sometimes there is fast food, but not nearly as much as there used to be when I lived in California.

Grub Grade brought me here. I've been an avid food blog browser (lol?) for a few years now. I'm from the poverty belt in the midwest so I can only compare my mid-upper class restaurant experiences with what St. Louis has to offer.

I mainly return here because I love cooking at home much the same way you do. I've actually used a few of your recipes and enjoyed them. Chicken breast in the crock pot has become a favorite of mine since I started reading the blog.

I think it's your laid back approach which is so appealing. I read the other blogs you mentioned, and other types of blogs, but yours is the most soothing and enjoyable to me. There's no element of trying too hard or competition (except between hot sauces maybe) which makes for relaxing reading. Thanks!

Good review, good pics. As always. One thing: I would've had to have asked to see a manager, especially after her little "apology". Also? My tip would've automatically shrunk from my standard 20%+ down to a flat 10%.

Thanks. (Although the pics kind of sucked, but I appreciate the compliment.)

Both fair points. The "manager" - or maybe owner - was busy showing off and glad-handing people. It's possible - not certain, but possible - that had he actually been helping out, the waitress would have been able to provide better service.

What I like to do when the server neglects us and the busboy does most of the work is give money directly to him (or her) and say "Keep this for yourself." Whether they do or not, I have no idea, but they are the ones who have earned it.