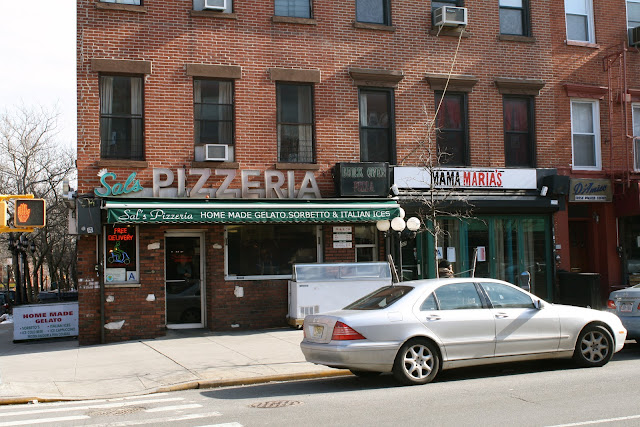 When we arrived in Brooklyn last spring, I started going for walks almost every day, usually in a different direction. I figured that was the best way to get to know the neighborhoods, specifically to see what restaurants looked good, even more specifically the pizzerias. I only ate at about 10% of the joints I entered; I just wanted to get a look.

On one of my walks, I ducked into Sal's Pizzeria. I can count on one hand the number of places that looked worse. There were only two different pies out that day and they looked like they might have been sitting out for a day or two. I was pretty sure I would never eat there.

A few months later I saw the exterior of Sal's on Blue Bloods. (They had turned it into a pizza restaurant called "Salducci's," and Henry called it the best slice in the city. But of course this had nothing to do with the actual Sal's Pizzeria, and it did nothing to change my desire to never eat there.)

And then, a couple months after that, the restaurant next door - Mama Maria's - was on Kitchen Nightmares. The same person owns both. I don't pretend that reality TV has all that much to do with reality - it's pretty obvious that a lot if not most of Kitchen Nightmares is staged - but it still reinforced my opinion from my first visit that those slices of not-fresh-looking pizza had probably been sitting out for a long time.

After seeings Sal's twice on TV, I became curious. And hey, it's still pizza. As I have written before, of the thousands of slices I have ever eaten in my life, there are only two that I would call bad.

So I went by the other day.

There were three pizzas on display but only one that looked edible. The white pizza looked as dry as any I have ever seen; the "grandma's" (or something like that) looked overcooked. The Margherita looked okay, though, so that's what I requested. The guy slid it into the oven and left it there for several minutes. I thought for sure it would be overcooked.

When I received my slice and was asked if I wanted to stay or go, I said go. I actually wanted to stay but, even though half the tables were empty, they were covered with used plates and napkins and empty soda glasses. I guess Sal's doesn't care much about bussing the tables. Whatever. It was a nice day so I took my slice outside and placed it on a wall. 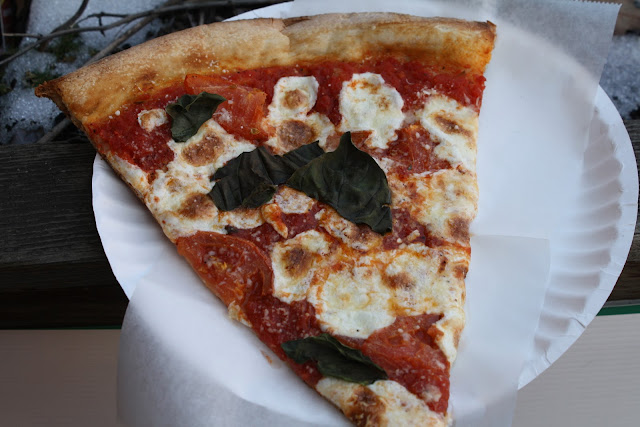 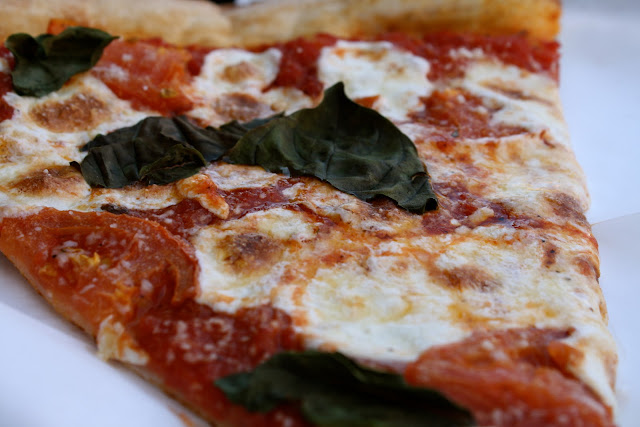 The pizza wasn't overcooked at all. It actually wasn't even that hot. Apparently Sal's doesn't crank up their ovens very high. (If My Little Pizzeria left a slice in their oven for the four or five minutes that my slice sat there, it would not only be scorching hot, it would be burnt.)

There were two things that stood out to me: the cheese, which was tasty, and the sauce, which was terrible. There was a nice amount of cheese on this slice (sometimes I've received slices of Margherita with barely any cheese on them) and it tasted fresh. But the sauce was sickly sweet, like room-temperature tomato paste out of can. 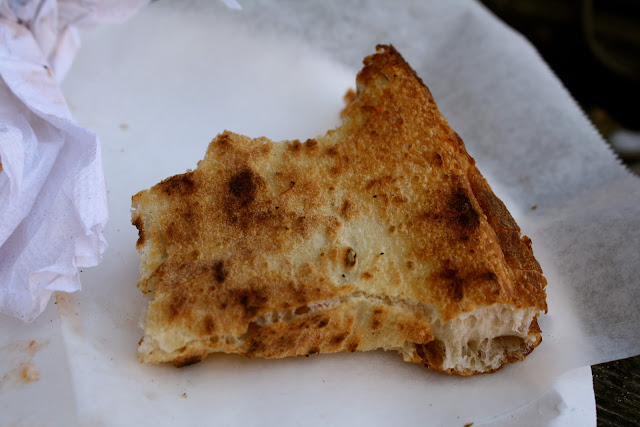 The crust was pretty crisp. If you like slices that can fold, this might not be your best bet, as it broke in two when I tried to fold it. But I don't mind crispy crust, so I was okay with this.

My initial reaction to Sal's last April or May was correct: this is pizza I should have avoided. Now, it's nowhere near as bad as the two slices I mentioned earlier that I refused to finish, but it is not a slice I will ever get again and it's not one I can recommend to anyone. If Sal's existed in a town somewhere with only a Pizza Hut as competition, I could see the appeal. In a neighborhood where you can't walk more than a couple of blocks without coming across a pizza joint, there is no point in ever returning.
Posted by JustinM at 10:00 AM

Cobble Hill is definitely not the area in "Do The Right Thing."

I liked Kitchen Nightmares when it premiered years ago, but there are only so many times I can see the same show: food is crap, restaurant is dirty and/or dated, owner doesn't care, Gordon "fixes" him or her, we see the results in the final two minutes of the episode, it's over.

You are now forcing me to remind you again of Sal & Carmines in Manhattan, best slice in NYC (my humble opinion);)

I have not forgotten Amy. I just don't enjoy visiting Manhattan, so I doubt I will be going there.

I tried sal & carmines and found it way too salty and expensive for what it is.