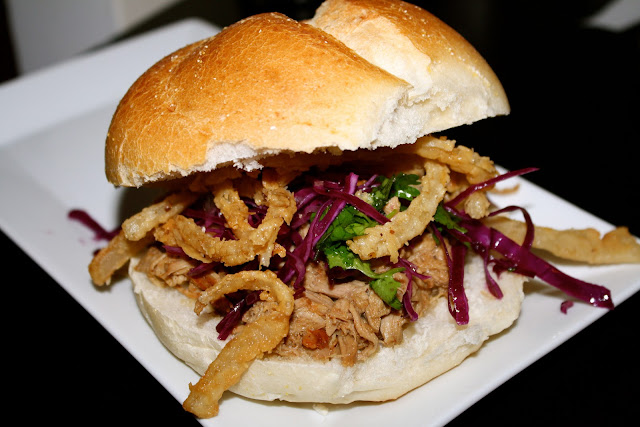 I'll get right to the point: this might well have been the best sandwich I have ever made.

I didn't intend to make anything special here. I knew a big storm was on its way and I liked the idea of hanging out in front of the TV with something warm to eat, watching snow pile up outside the living room windows. So of course I decided to use the slow cooker. I was just going to make carnitas. But then each step of the way I had a different - dare I say better - idea. Here's how it unfolded. 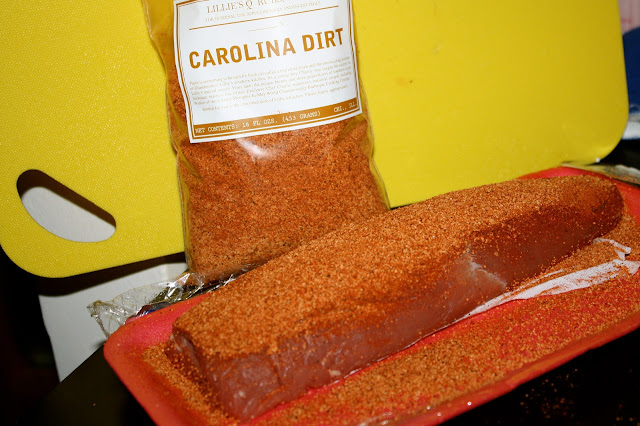 I got a pork tenderloin, just under two pounds, and rubbed it with my Carolina Dirt. Pork shoulder works better in a slow cooker, there is more fat to melt away and bathe the swine, but there were no shoulders at the store. So I got the tenderloin and decided to use plenty of liquid in the cooking process. 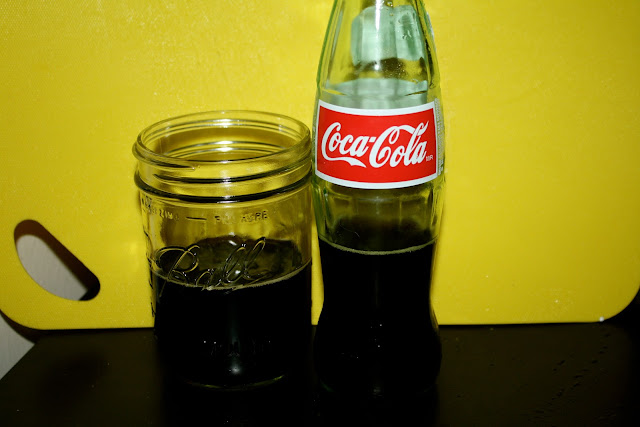 Mexican Coke. The sugar in this will almost caramelize as it cooks. 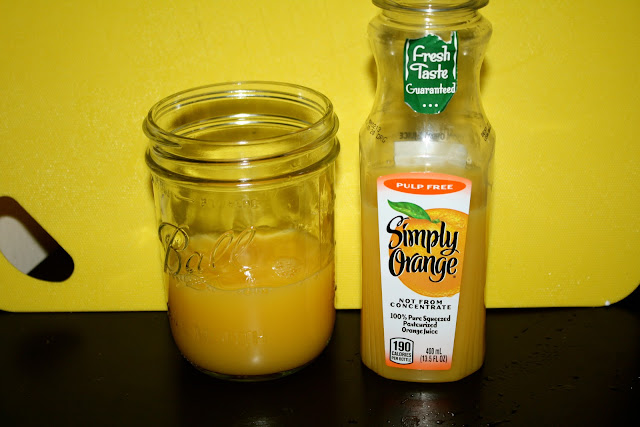 And some orange juice, a sour liquid to balance the sweetness of the Coke. Both went into the slow cooker with the pork.

Right about this time, I decided that instead of carnitas, I wanted a sandwich. I went through a few ideas for how to top it. 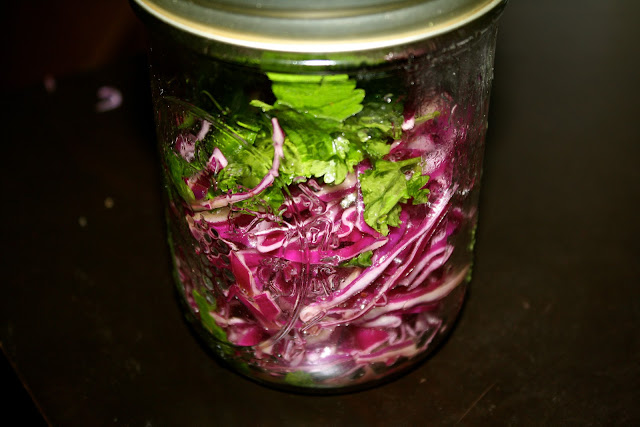 I put some shredded red cabbage in a jar with chopped cilantro and drizzled in some olive oil, vinegar, and a splash of the orange juice. I put the lid on, shook it up, and placed it in the fridge. 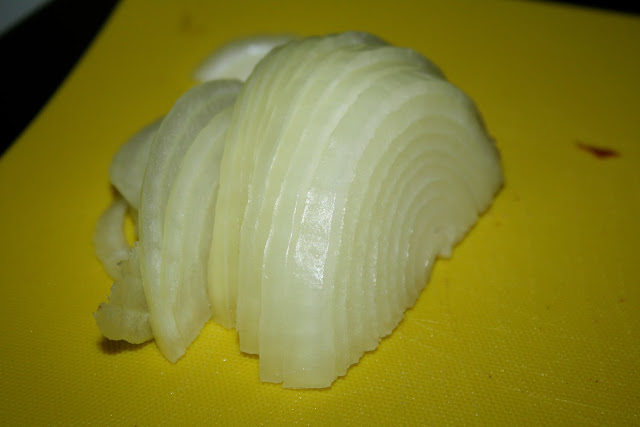 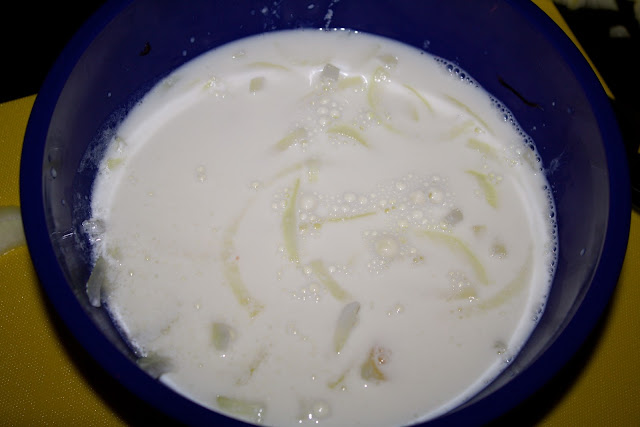 I thinly sliced an onion and soaked it in a bowl of buttermilk. This also went into the fridge while the pork was cooking. 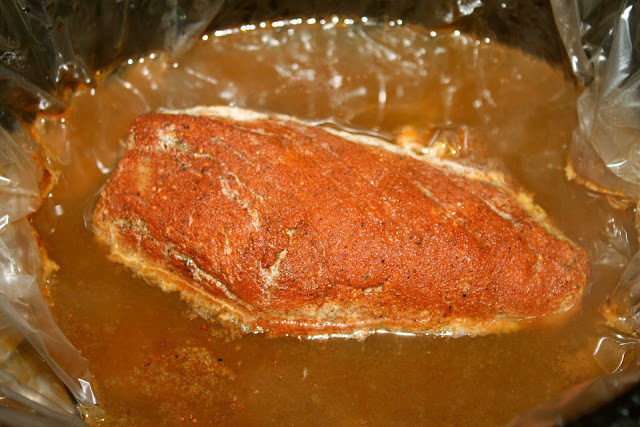 Here's what the pork looked like after four hours. Not quite there. 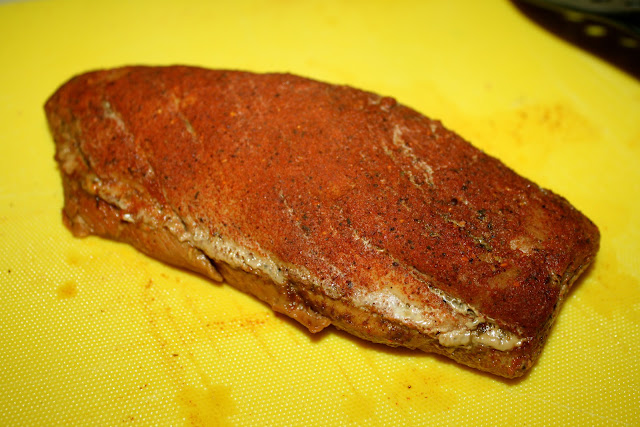 After five hours, I removed the tenderloin. 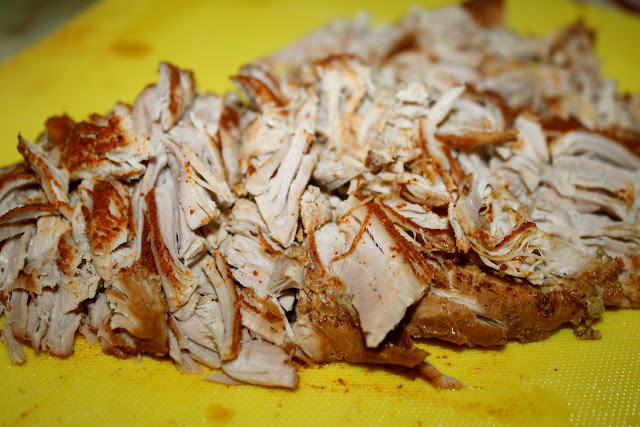 As usually happens, it only needed some gentle prodding to fall apart. 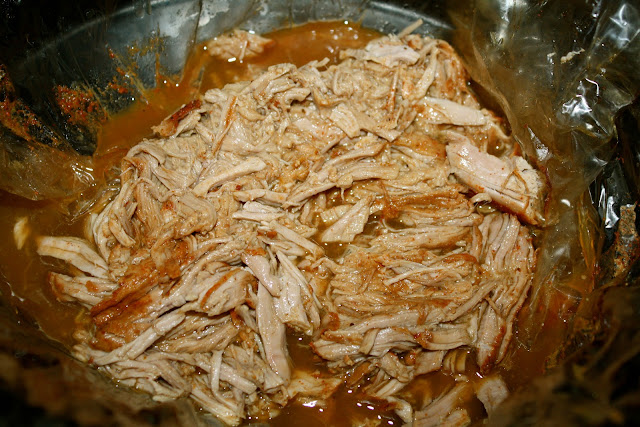 I skimmed out the few small pieces of fat that were floating in the sauce, then took half of the shredded pork (Elizabeth still wanted carnitas so I cut away half of it for that purpose) and returned it to the sauce for one hour. 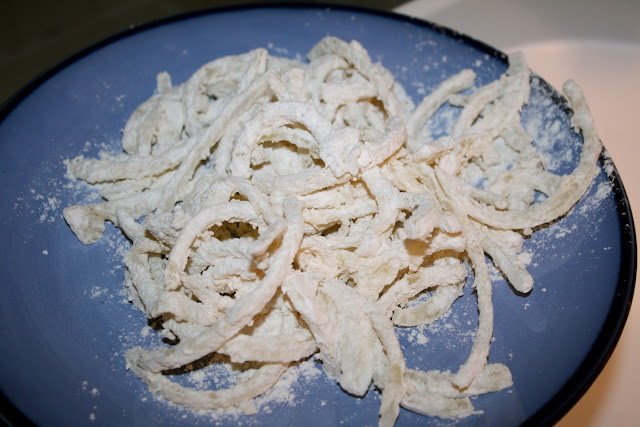 Remember the sliced onions? I removed them from the buttermilk, tossed them in flour, and quickly fried them. 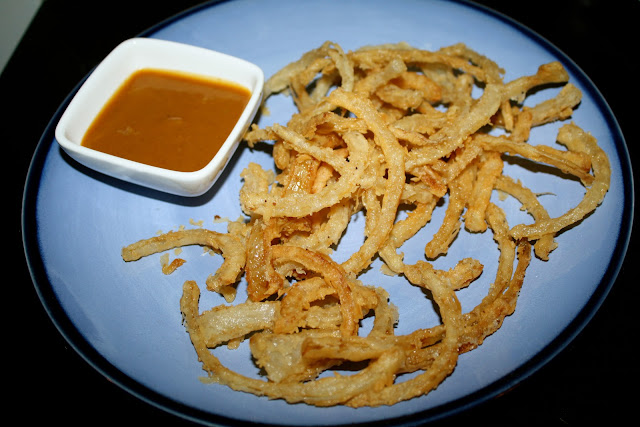 I only needed a handful for my sandwich, so the rest went on a plate with some Carolina mustard sauce for dipping. 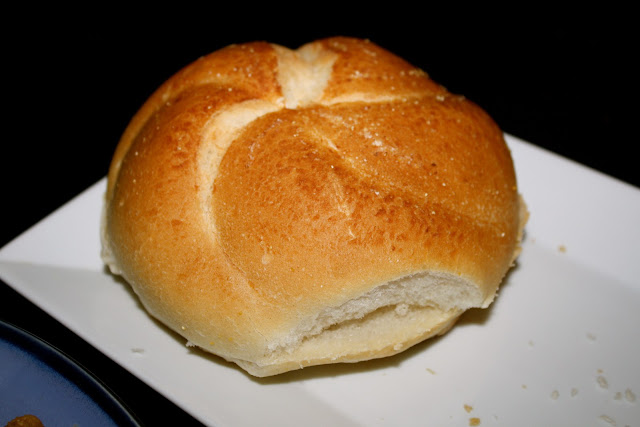 I picked up a fresh Kaiser roll at the bakery. 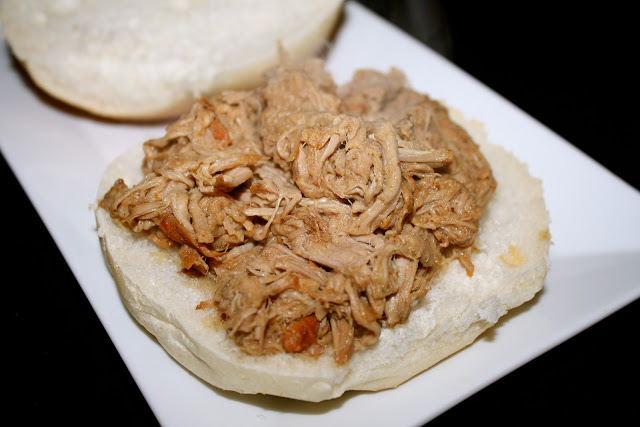 My sweet, sour, slow-cooked swine went onto the roll. 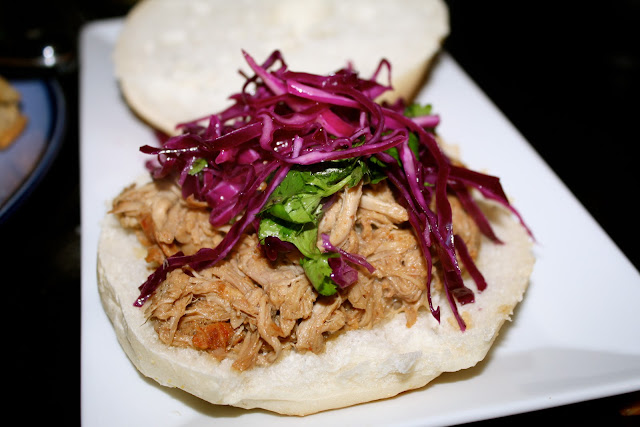 With some of the red cabbage salad on top. 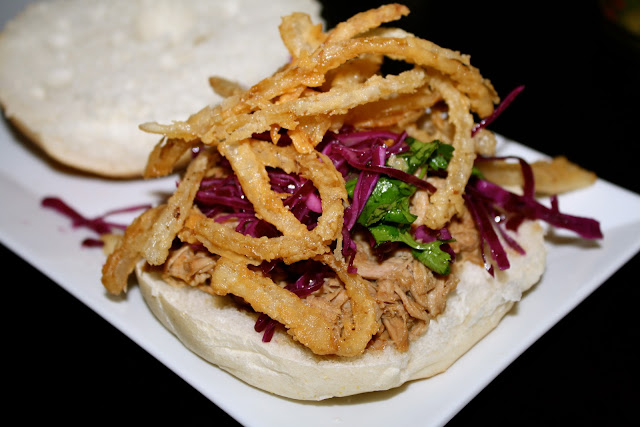 And then a handful of my crunchy fried onions. 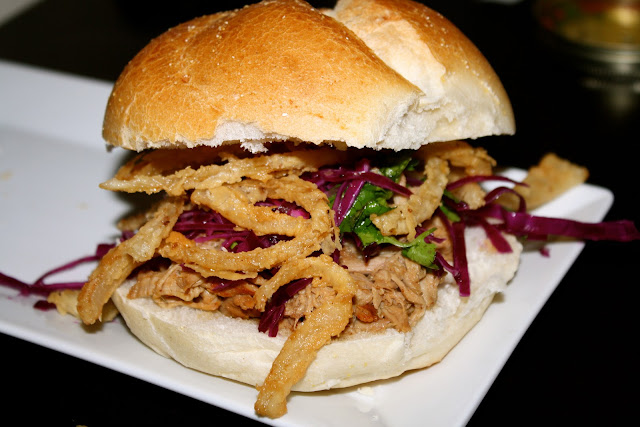 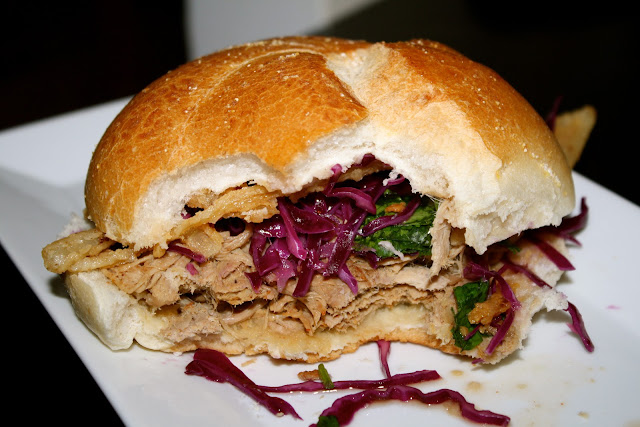 I could have eaten the pork all by itself - it was a juicy, sweet & sour pig candy. But it worked great in the sandwich, too, balanced by the tang of the slaw. And the crispy onions, in addition to being tasty, added a great contrast of textures. I could have eaten two or three of these.

Usually when I make sandwiches - especially using the slow cooker - I think of ways that I can improve upon them next time. Next time I make this sandwich, I will be making it the exact same way.
Posted by JustinM at 9:00 AM

Your first sentence gave me chills! I can't wait to try this! Thank you for your blog, I look forward to it daily.
Karee

It is not a good idea for me to read your blog when I have very little food in the house and can't run to the store. Our car is buried. I'm salivating!

Look good, I just had a question. Is that cling film? or a plastic bag that you put the pork and sauce in which then goes in the slow quicker? I thought all the wet ingredients had to touch the sow cooker surface?

Hi Sean. I use these. Back in California I only brought out the slow cooker once every couple of weeks or less. Sometimes more than a month would go by without me using it. But here in NYC where the weather is cold, I use it at least twice a week. It gets tiring always scrubbing it. These work wonderfully.

you're a real man, pp