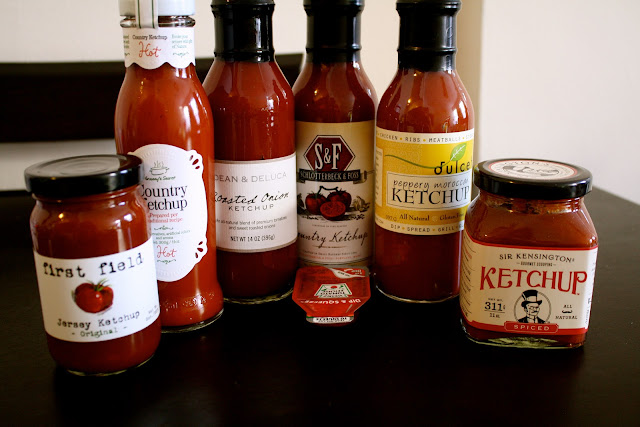 I always enjoy a condiment tasting. A couple years back I did a tasting of all my favorite fast food condiments, probably one of the 10 most popular posts I've ever done. That inspired a tasting of hot sauces. Just a few weeks ago I tasted ten Carolina-style barbecue sauces.

And now we've come to ketchup. Ketchup is not one of my favorite condiments. I am much more likely to use mustard, more likely hot sauce, and slightly more likely mayonnaise. For years, I did not use ketchup on anything except eggs.

And then I discovered Sir Kensington's, and I started adding ketchup to things with more frequency. The other day I bought a "Country Ketchup" at Whole Foods and thought it was quite tasty, too. So the idea to do a ketchup tasting was born. I rounded up a few more bottles, fried up some crinkle-cut fries, and began. 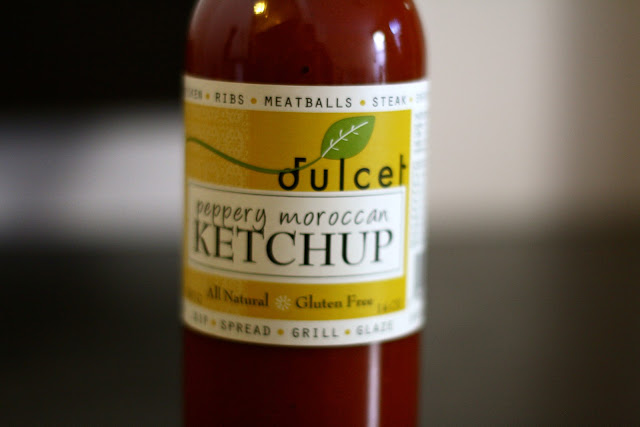 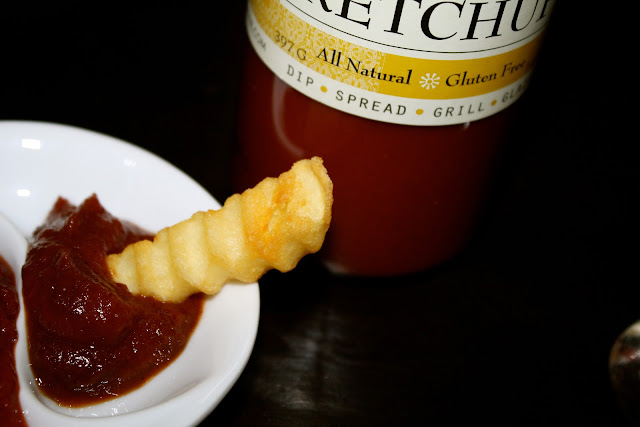 With the name "Peppery Moroccan," I was expecting, you know, pepper flavor. I could not detect any. And sure enough, none was listed in the ingredients. Bizarre. However, the flavor was still pretty good - it tasted of cumin (which wasn't listed) and smelled of cinnamon. In addition to tomatoes, I also tasted orange, and indeed orange juice is a part of this.

I liked the grainy texture - it reminded me of the cheaper ketchup I used to slather on my fries every Friday in high school (when the Junior class sold burgers and fries for a prom fundraiser). I've tried to find that ketchup for years - I imagine it was a cheap, restaurant-supply ketchup - though I admit I probably wouldn't enjoy it were I to try it now. Anyway, I loved the texture of that ketchup and I loved the texture of this. 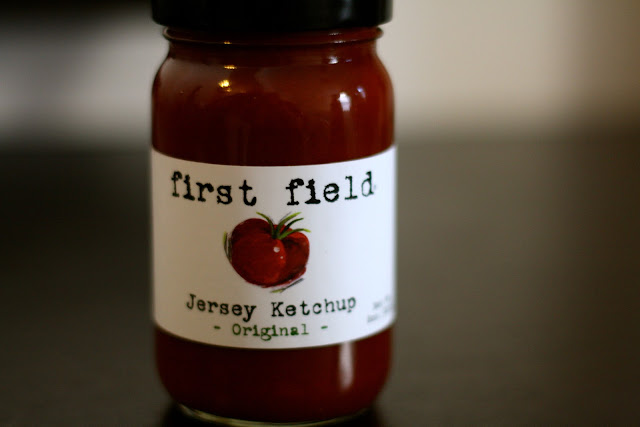 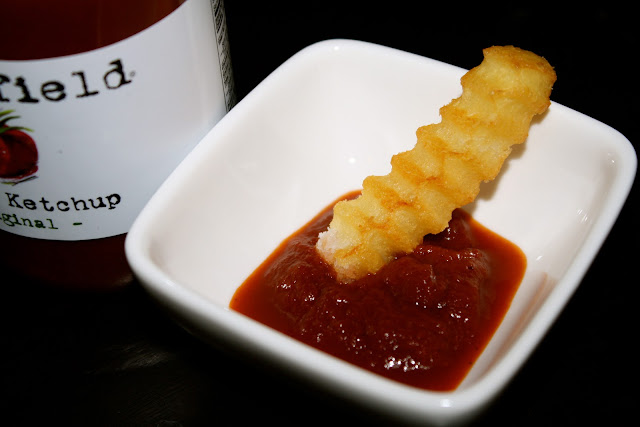 A few months ago, someone from First Field contacted me and asked if I would be interested in a sample of their Jersey Ketchup. I said definitely. It never arrived. I will not hold that against them, though - there is definitely a chance it was snagged by someone at the post office. (It's remarkable how many things never show up in our mailbox here.)

The first taste was not good, a slightly acrid, intensely tomato-flavored bite reminding me of stale brown sugar. But I could not believe that is how this ketchup is supposed to taste, so I left it alone for ten minutes before returning to it. The flavor mellowed considerably. This actually ended up being the first ramekin of ketchup that I finished.

My only complaint (after the initial taste) is that First Field is sweeter than I would like. It would be great if they were to offer a spicier version like Sir Kensington's does. 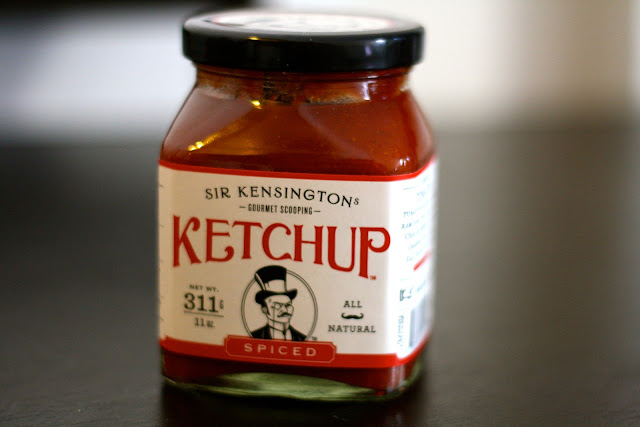 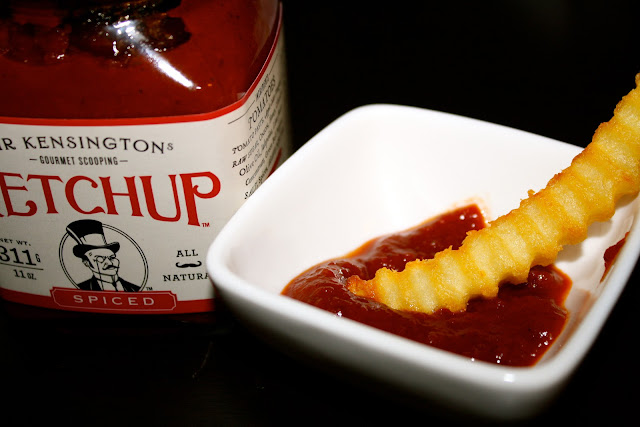 I was curious to see how Sir Kensington's would stack up against the other gourmet ketchups, none of which I'd tried before. Because I have been eating this stuff for a year and a half and I have called it the best ketchup I have ever eaten. It turns out, it stacks up just fine. I have a harder time finding the "Spiced" version around these parts - there is a local market that sells Sir Kensington's for literally half the price of everywhere else, but they always seem to be out of the Spiced - but for this tasting I made sure I acquired a bottle.

If I were only allowed to eat one of these ketchups for the rest of my life, it would be Sir Kensington's. I love the mellow sweetness of the tomatoes, the tang of the apple cider vinegar, and the not-too-strong-but-enough-to-know-it's-there bite of the jalapeños in the Spiced version. 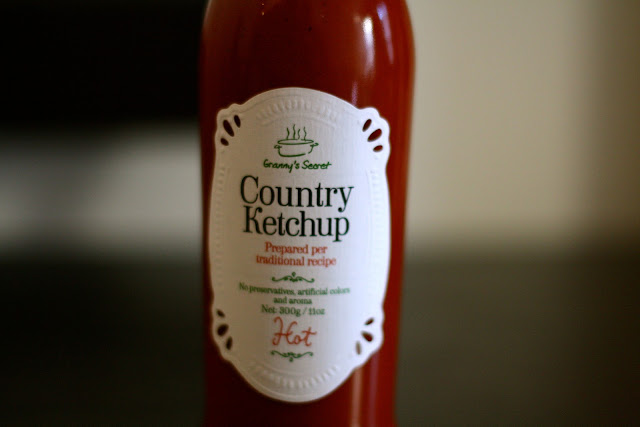 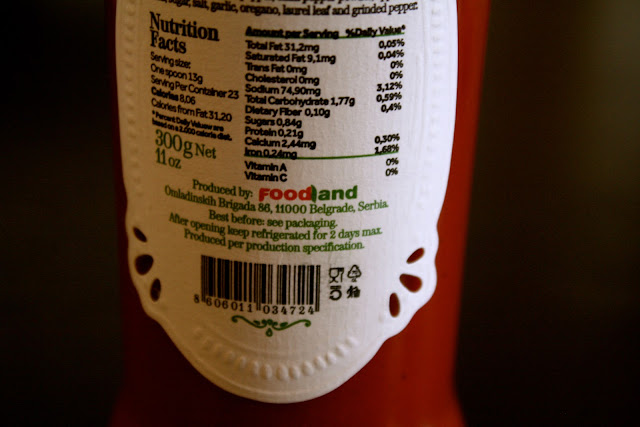 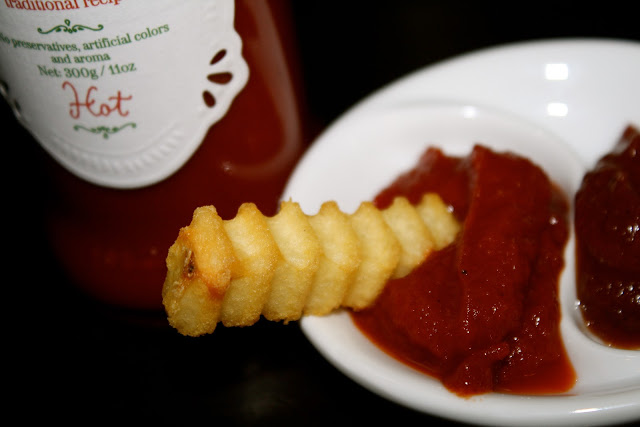 When picking up each bottle at the store, deciding whether I should try it, I just assumed they would all be made in the Northeast. Certainly in the United States. What I never would have guessed is that this Country Ketchup is made in Belgrade, Serbia. I almost put it back, but then I realized 'Wait, I'm huge in Serbia.'

Okay, maybe not huge, maybe it's just marinko, but still. So I bought it. At first taste there was a flavor I could just not place. And I still can't. But within a few seconds I had forgotten about it, as a noticeable heat crept up. I tasted garlic and oregano and the pepper, possibly white. This was the spiciest of the ketchups I tried, and that is definitely a good thing.

The label says something curious: "After opening keep refrigerated 2 two days max." How literal do you think this is? It's been three days since I tried it; will it kill me? Was it really able to survive the trip from Serbia and sit on the store shelf at room temperature for who knows how long, but has expired in the 60 refrigerated hours since I opened it? I guess we'll see. 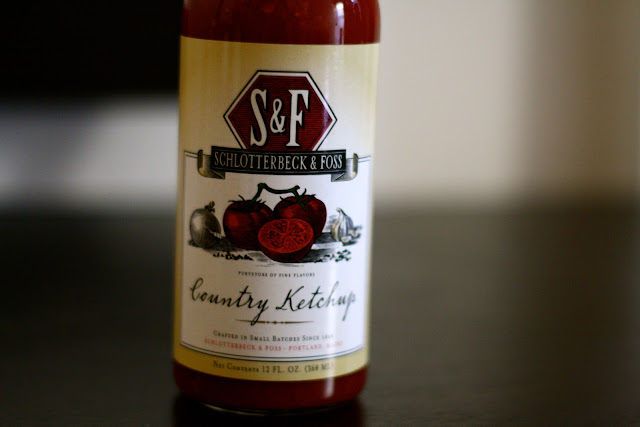 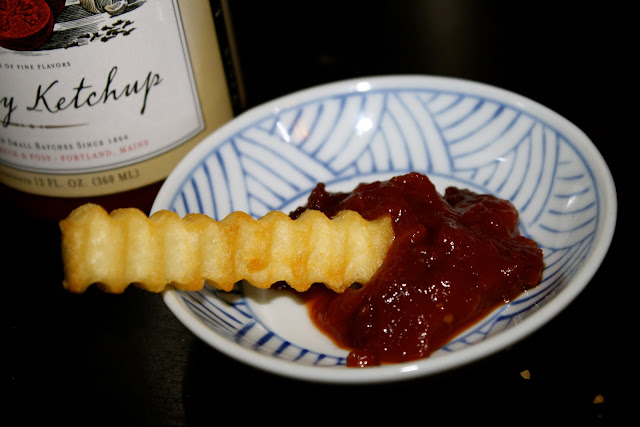 This is the ketchup that started this all. It was on sale at Whole Foods and it looked good. Of all of these   ketchups, this was the sweetest, tasting more like a chili sauce. That's not a knock; I like chili sauce, but the onions and garlic advertised on the label did not show up. The red bell peppers, however, did.

Like I said, not bad at all, but I will probably use the rest of this to make a cocktail sauce or chili; I will not be using it as a ketchup. 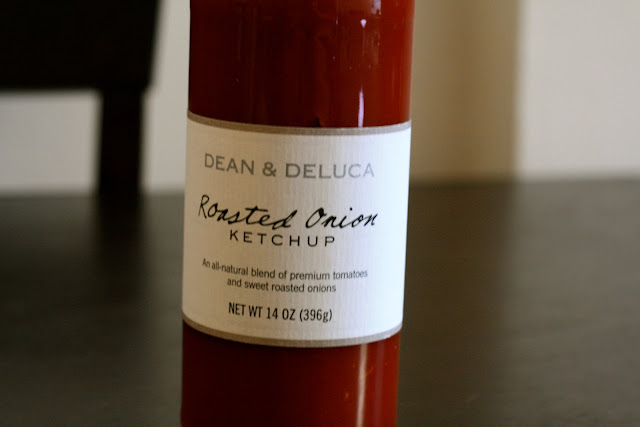 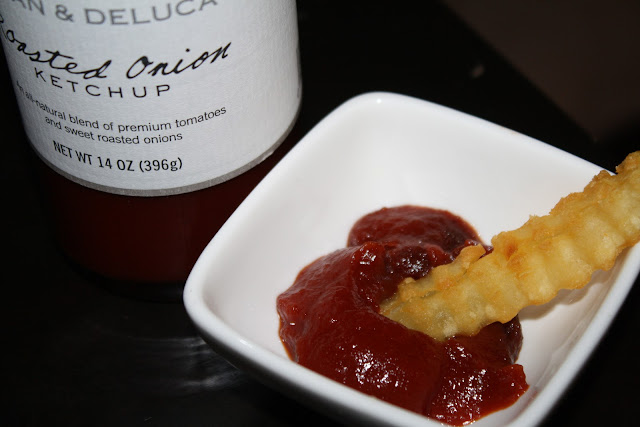 The lack of onions in the previous ketchup was made up for by Dean & Deluca's Roasted Onion ketchup. This thing was bursting with the flavor of roasted onions. There were small (although not that small) pieces of onion in most bites. So you can probably guess what I'm going to say: If you like roasted onion, you'll love this. If not, you'll hate this. (But, as I often point out, if you hate roasted onion you wouldn't buy a roasted onion ketchup in the first place.)

This looks like it's going to be the bottle that disappears the fastest, as my breakfast the last two days has been egg whites scrambled with wild boar sausage and healthy deluge of this ketchup. 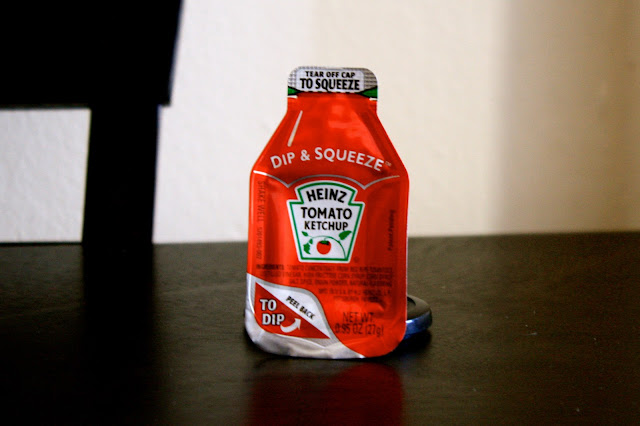 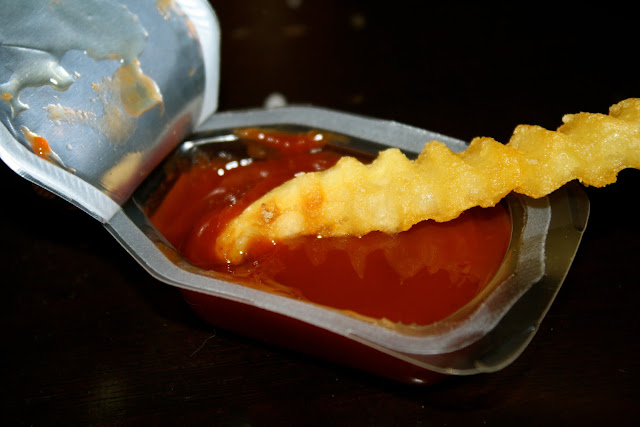 Okay, not exactly gourmet, right? But I tried this for three reasons: A) I had some, 2) There is no denying how incredibly popular Heinz is, and D) I thought it would be funny if somehow I found Heinz better than all the rest. (Like the Judgment of Pasadena we did a couple years ago, when the $3.99 bottle of Blue Fin Pinot from Trader Joe's won.)

Well, it didn't win. It was probably my least favorite of all of these. That's not exactly fair, though. These are all made in relatively small batches; Heinz is mega-produced and full of sugar. (I still didn't mind it, however. I grew up on Heinz ketchup and, though I have no brand loyalty to it these days, I have nothing bad to say about it.)

You probably noticed I didn't do any numerical ratings and I'm not going to be ranking these in any kind of order. Unlike most of my other condiment tastings, there are no ketchups here about which I will claim "I'm never buying this again." I didn't hate any of them. I can't say for certain that I will buy any of them again except for Sir Kensington's, but I probably could have guessed that even before the tasting began.

I hope you enjoyed this and I hope you have a good weekend. I'm off to California in a few days for two weeks - I have a wedding to attend, a job to do, the birthdays of two of my favorite people in the world to celebrate, and March Madness to watch. I will try to put up some posts but don't know if I will get around to it every day.
Posted by JustinM at 9:30 AM

I stumbled across Sir Kensington's at my local store recently and picked some up based on your many praises. However, I couldn't decide between the original and spiced. I ended up with the original but I will pick up the spiced next time I am at that market.

Okay as many times as you've mentioned it, Sir Kensington is going on my list. I already have several bottles of E. Waldo Ward products you recomended on my shelf that I need to try. Welcome back to California. Karee

I also tried Sir Kensington's at your recommendation. I've never seen the spiced variety. I'll have to watch for that one.

Have a good trip.

Have you tried the Heinz "balsamic"?

I too have tried (and liked) the Sir Kensington's ketchup based on your comments. I like it much better than "regular" ketchup. But now I will have to try some of those listed in today's post!

I recently tried Sir Kensington after stumbling across your blog and reading about it. I will probably never be able to eat any other ketchup happily again. It isn't sold locally so I actually ordered the spiced and original on Amazon. Pricey, but worth it.

Sir Kensington Ketchup recently showed up at our Safeway. It's $5.99 a jar, but thoughts have convinced me to spend the cash.

I dunno what it is, I aint keen at all on Ketchup with 'bits' in, I much prefer a smooth sauce. Its probably why I prefer Heinz :)

Since you like the spicy stuff, I feel compelled to note that the fine folks who make Tabasco sauce also produce McIlhenny Farms Spicy Ketchup; if you can find it, give it a try...and, no, not the same as Heinz Ketchup w/Tabasco, although that's in my fridge at the moment too.

Have you ever tried K.O. Ketchup? I got a free bottle of it in the mail last year. It's pretty good.

Amy - Yep, I got some of the trip to New York. I liked it but I wished it had more of a balsamic flavor

Andi - You can buy it off their website, though I don't know if Amazon is cheaper

JRussRhodes - I've heard of that, I think I saw it in the gift shops in New Orleans, but I never tried it. If I see it again, I will get some

Anon - I tried K.O. ketchup about two years ago. I hated it: the bottle I tried had a terrible burnt flavor

Really enjoy your reviews. You've mentioned Garlic Sauces in other posts. Please consider doing a comparison. I would love to find a nationally available, flavorful garlic sauce. Thanks!!

So, you liked that Belgrade ketchup? Bakina tajna (Granny's secret), they have some great products. I am a customer. Nice find! Greetz from snowy Belgrade.

I liked the Belgrade ketchup very much - nice and spicy.