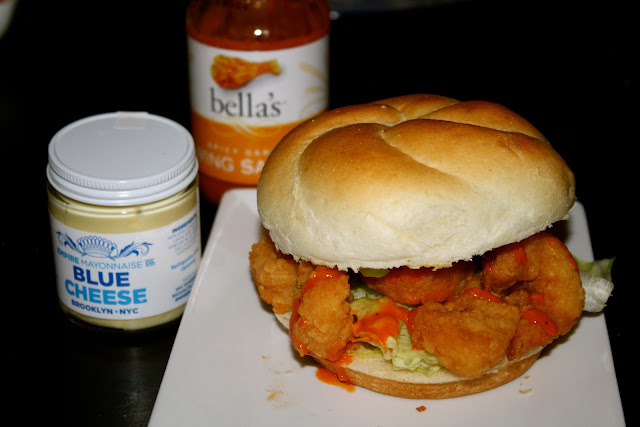 I love fried shrimp sandwiches. I don't like most other seafood on a bun - not fish, not crab cakes, and I don't really like shrimp rolls anymore either (though I still love lobster rolls). But fried shrimp on a bun with hot sauce... damn I love it. 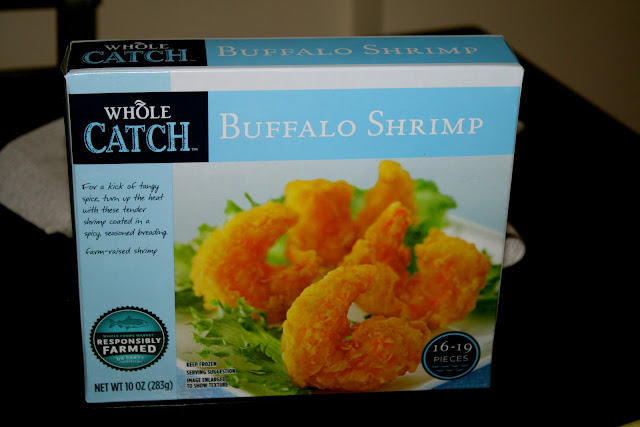 I wrote about these buffalo shrimp a couple of months ago, a sandwich relatively similar to this, though there was a new wrinkle to this sandwich that I will bring up in a few seconds. 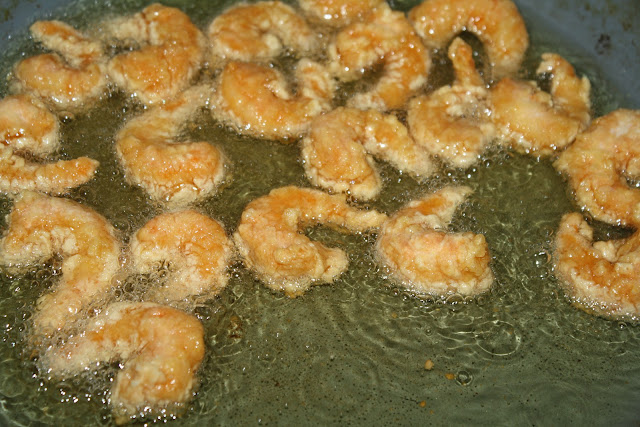 They fried up in less than four minutes. 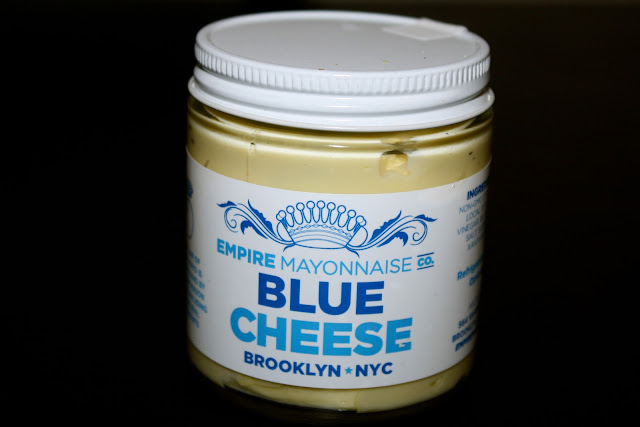 And here is the new wrinkle: Empire Mayonnaise Co.'s blue cheese mayo. I've written of several other of their mayos: black garlic, vadouvan, smoked paprika, lime pickle, rosemary... I've loved all of them. So the blue cheese version was an easy call.

Unfortunately, it was the only one I've had so far that I did not love. I could not detect any blue cheese. Not in the aroma, not in the flavor. I implored Elizabeth to take a taste, as she has the best sense of smell of anyone I have ever met and one of the best palates.

"It doesn't taste like anything except mayonnaise," she said, confirming my thoughts.

It took a lot of the wind out of my sails; I'd specifically decided to make this sandwich with the blue cheese mayo as the centerpiece. But, oh well. It wasn't bad by any means, so I still did everything the way I'd planned. 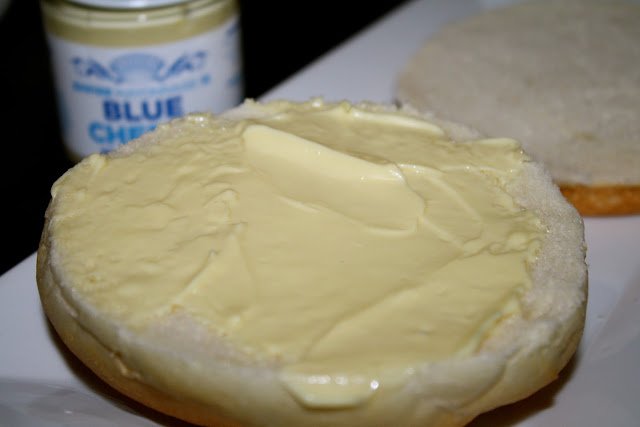 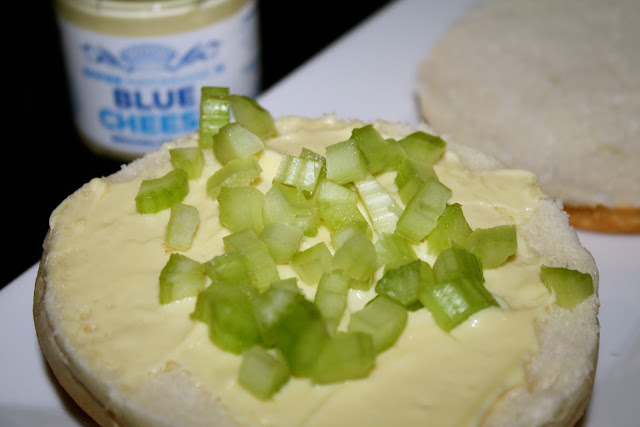 I slathered the mayo across a bun and added diced celery. 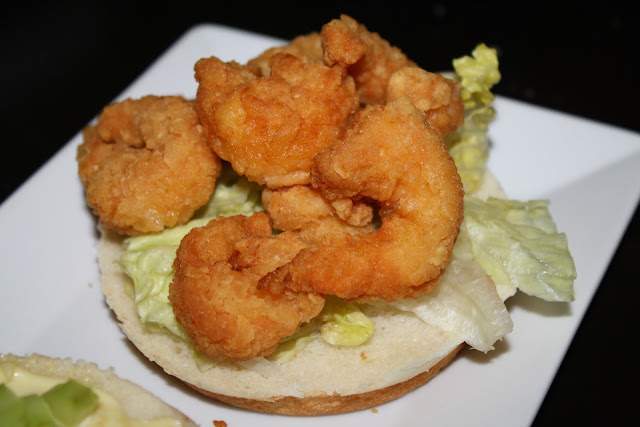 I layered a few of the shrimp on a bed of lettuce on the roll . 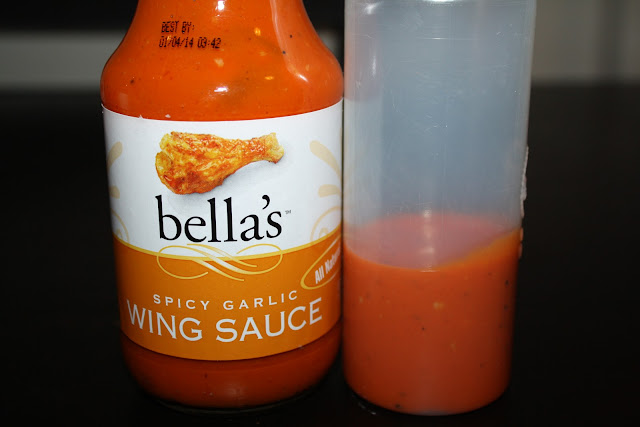 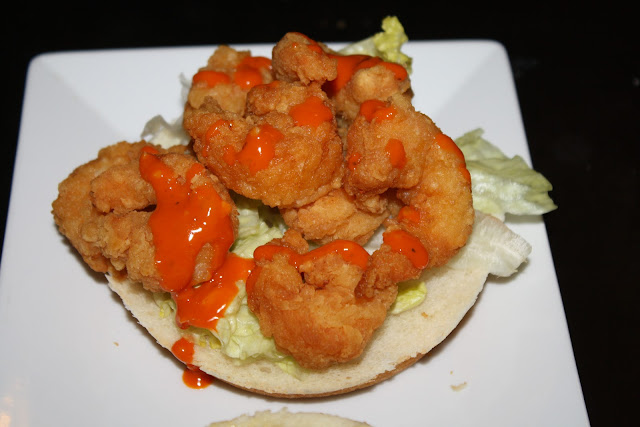 This spicy garlic wing sauce, also from Whole Foods, has been a favorite of mine for a few months now. It's got plenty of heat (though nothing overpowering) and quite a noticeable garlic punch. I squirted it all over the shrimp for some extra flavor. 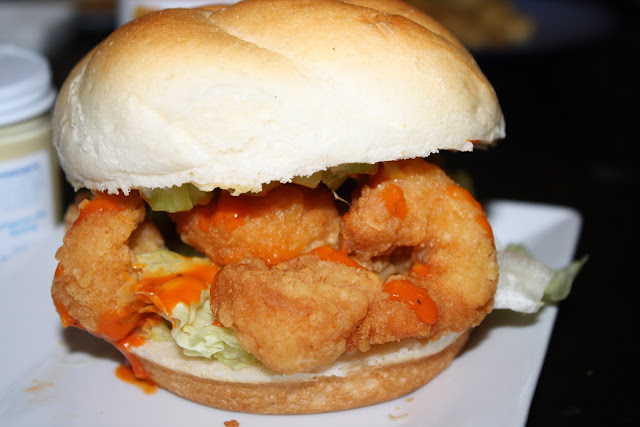 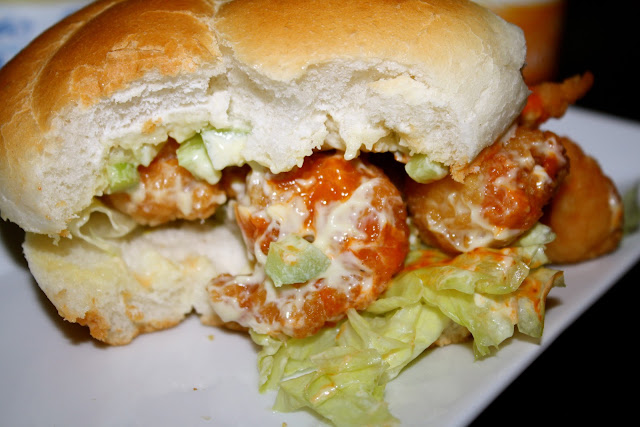 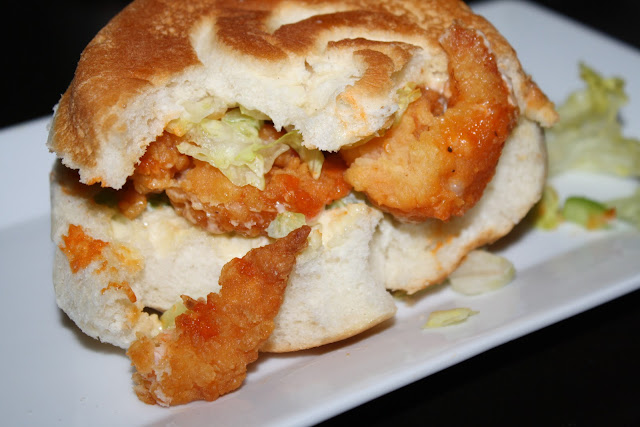 Even without the blue cheese flavor, the sandwich was still awesome. I don't know what it is about the combination of fried shrimp, buffalo sauce, and celery that I love so much, but it pretty much never fails to make me happy.
Posted by JustinM at 10:00 AM

Sure looks like the mayonnaise people put plain mayonnaise in the blue cheese mayo jar.

I like to toss the fried shrimp (or other fried delicacy) in a bowl of the sauce to get a full coating.

When I use cheaper, tiny breaded shrimp (like Gorton's popcorn shrimp), I definitely do that, too. But these were larger, meaty shrimp that had buffalo flavor in the breading, so I just wanted a little extra sauce, not a full drenching.