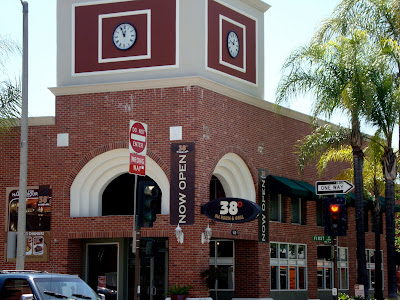 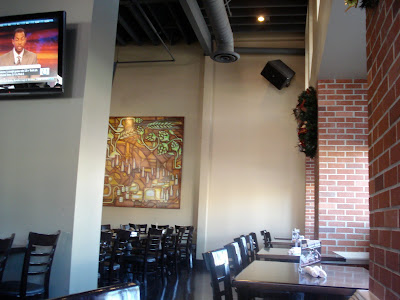 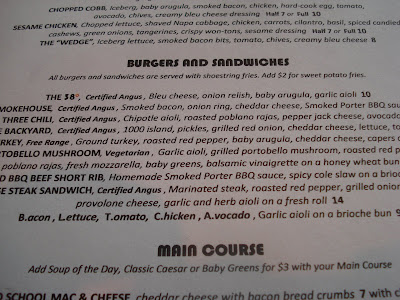 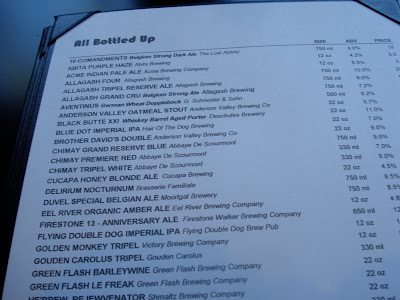 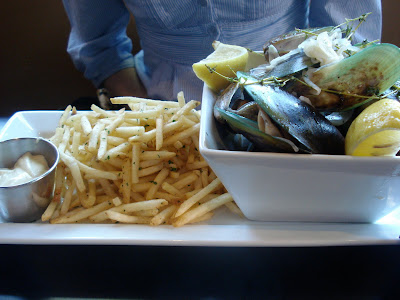 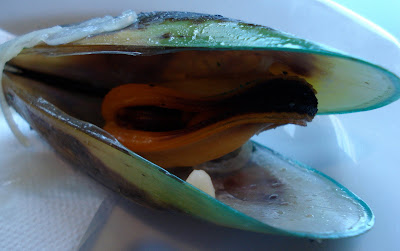 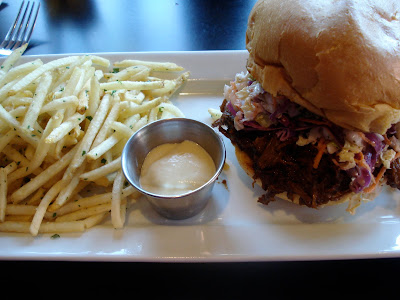 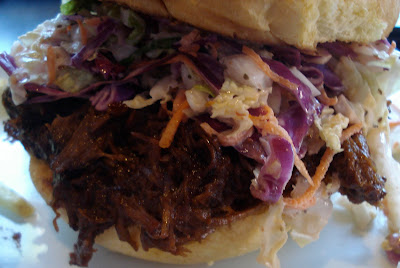 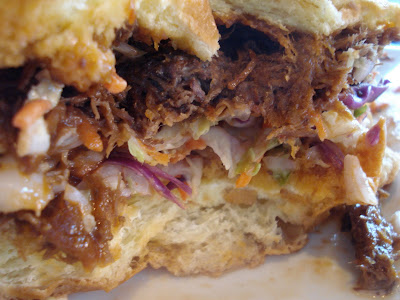 While driving to Arby's a few months ago to try a new fast food promotion with my friend Zach, I noticed 38° Ale House. A few days later I looked it up. It seemed like a place I would like. They have dozens of different kinds of beer available, and a menu that reminded me of Gordon Biersch. But I usually only eat fast food in Alhambra; if I'm going out to a sit-down establishment I stay around Pasadena or South Pas.
The other day Elizabeth took the day off work to go to the DMV and I went with her so that she wouldn't be completely bored. (You know something is boring if someone wants me to accompany them for entertainment's sake.) We were there a little over two hours - although we felt lucky that it only took that long - and afterwards she offered to buy me lunch anywhere I wanted. ("But let's not get too crazy," she added. I wasn't sure if this meant I shouldn't suggest someplace really expensive or I shouldn't suggest something that actually is crazy, like a lunch buffet at a strip club. But I did not ask for clarification.)
It was a beautiful day and we both felt like going somewhere more than a few blocks from our place, so I suggested 38°. We got there a little after noon. We were greeted by a friendly hostess and and even friendlier guy behind the bar. There were only a couple other tables occupied in the place, and they sat us next to one of them: two businessmen, one of whom did not stop talking the whole time we were there, even when he had food in his mouth. (About how great an athlete he was in high school, about how much beer he drinks, about all the people he knows at other companies. Just a complete jackass. His dining companion may have uttered ten words in 35 minutes.)
I was impressed with the beer list: several Belgians, Deschutes Black Butte Porter, Abita Purple Haze, etc. Of course, I ordered an iced tea. There was a time when I loved having a beer or two at lunch. Now it just makes me want to take a nap. Getting older sucks.
I had seen several pictures of their burgers, both on the internet and the weekly ads we get in the mail from the restaurant, and they look great. I fully intended to order one, until I saw the "BBQ Beef Short Rib" sandwich, with a homemade smoked porter barbecue sauce and spicy cole slaw. There was no question I had to try that. Elizabeth ordered the mussels and fries.
I laughed when my sandwich arrived. I'm not sure if I have ever been served a taller sandwich. This thing might have been seven inches high, at least half of that being the top bun. I prepared myself for the possibility that I would just be eating the meat. Fortunately, it was a very soft brioche bun, and just by holding it in my hands it decreased in height by quite a bit. It was very tasty. I have ordered short ribs and short ribs sandwiches at places for twice the cost of this and they have been full of fat or salt. This was neither. The homemade barbecue sauce was interesting, an almost burnt-coffee taste (but in a good way, if that makes sense). I liked it, although it couldn't compare to the Black Butte Porter barbecue sauce I had at the Deschutes Brewery in Portland a year ago.
The fries were really good, too. A little more time in the fryer would not have hurt, but overall I really liked them, spiced with garlic and served with aioli. Elizabeth loved her mussels. I didn't try any but I did have several tastes of the broth, and it was great. Much better than I make, I fully admit.
I really liked 38°. The food was good and the service was very good. The bar area has plenty of seats and flat screens TVs. I don't know if I will be back for a meal - there are always new restaurants to try - but I could see myself grabbing a beer and watching a game here sometime.
Posted by JustinM at 9:58 AM

Amy and I went there about a month ago and liked it as well. The sliders I got were so-so, but everything else was pretty good.

A good place to stop on your way over to Costco.

Yeah, that does sound bad. (Better than Bud Light though.) Lemme change that.

What did the baby have? Onion rings or fish & chips?

Haha. I knew what you meant. It's one of those typos that spell check will not correct.

Aw, back when I got to hang out with you! The good days. (Only messing with you.)

Random question: What's your opinion regarding all these fancy, practically couture burgers that have popped up everywhere lately? Would you rather have to eat those forever or just a plain old good burger with a condiment or two?

I wouldn't call that a random question - this is a food blog and I was just writing about burgers. But it is a good question. I am a huge fan of the concept of the gourmet burger craze; I love burgers as a new frontier of cooking, because they are often every bit as good - if not better - than steaks that cost three times as much. (Last night I had a "Philly Cheeseburger" at Firefly Bistro, with sauteed peppers, onions and A.1. aioli- it was one of the best things I have eaten all year.)

However, not surprisingly, there is a snobbery that comes along with the burger craze. Sang Yoon, the jackass behind Father's Office, can actually make a comment comparing his burger to the Mona Lisa. A restaurant in Pasadena, whose name I will not mention because I like several people who work there, serves a Kobe burger that is four times the price of the "Kobe Bistro Burger" at Tops, and not half as good. Many of the people who have jumped on the gourmet burger craze are taking license to charge exorbitant amounts for average burgers simply by invoking words that sound fancy.

So, to answer your question (finally), if forced to choose between the two forever, I would absolutely choose simple backyard burgers over the fancy burgers. Not only will you save yourself a ton of money, but the simple burgers, even grilled and overcooked, are usually just as good. And there is always a fun ritual involved. Really, has anyone ever had a burger at a backyard BBQ for a birthday party or the 4th of July and thought 'Ugh, this burger is no good?' I sure haven't. Food should always be a celebration.

Thanks for your response!
Actually, I did have a burger from the grill at a birthday party once that was disgusting. My friend had a habit of buying in bulk from discount stores (understandably, with 4 children), and I ended up reading the ingredients on the box before her husband fired up the grill. The word "beef hearts" rang through my ears through each bite. It was mushy and not good at all. Needless to say, I don't eat burgers at her cookouts anymore.

Hmm. Would it have been so bad if you hadn't seen the "beef hearts" ingredient? When I was younger there was a Caesar salad I loved, then I saw the waiter make it one time by grinding up fresh anchovies and it suddenly tasted terrible to me. (Of course a couple years later I realized that fresh anchovies are delicious and I started eating it again.)

I'm not sure! I think the burgers themselves were kind of awful to begin with, but I never turn down a burger. The beef hearts definitely changed that.

A couple of these food shots are 2 up close & personal for me!
At least it's good to know where I can get a drink & watch some widescreen HDTV.

38 "Dees Grees"... remember that jackbag? Anywho, I had to come on in to your site and kill a little time on this pre-holiday week and see if you can figure out who I be... 38 is seemed decent the couple of times I wandered in to partake... only major hassle with that place is that having a beer or 4 requires navigating the Alh PD filled streets... no fun at all, not that I'm advocating anything close to driving impaired. Either way, the place seemed a little too tidy for my taste... whay say you Judge?

Well, let's define terms. Is it "too tidy" for me and Liz to grab a quick lunch and have iced teas on a weekday? No, not at all. Would it be too tidy for us to get a group to watch a bowl game and drink excessive amounts of beer? Yeah, definitely. It very much reminds me of Gordon Biersch - a nice place to grab a bite and have a drink and watch some sports for a bit, but not anyplace I'm going to hang out at for more than an hour.