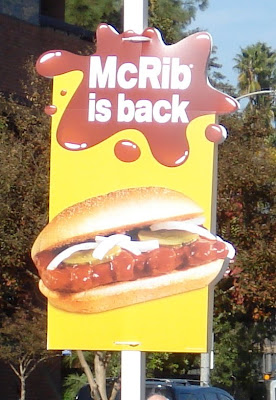 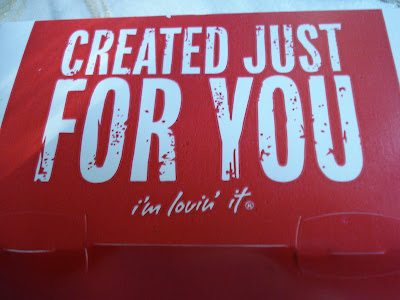 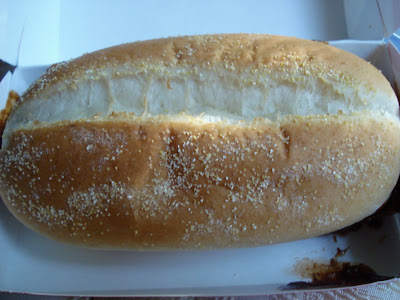 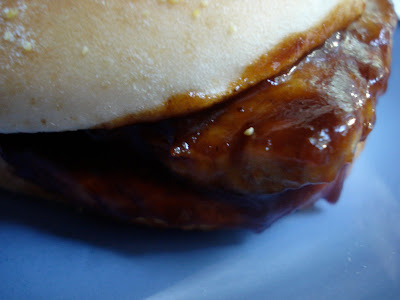 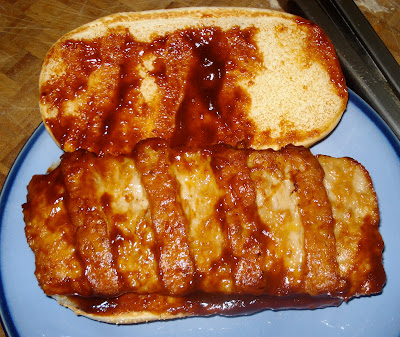 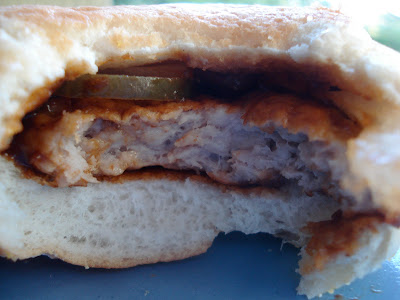 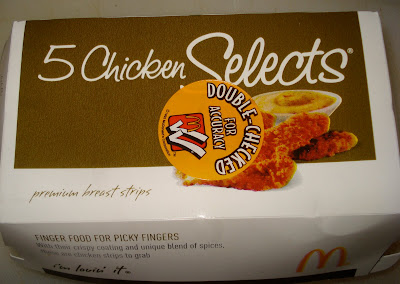 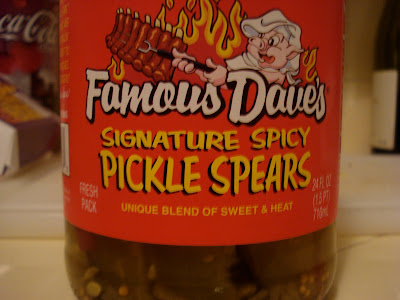 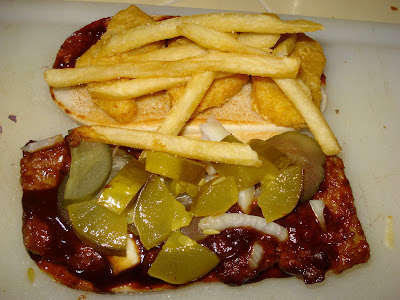 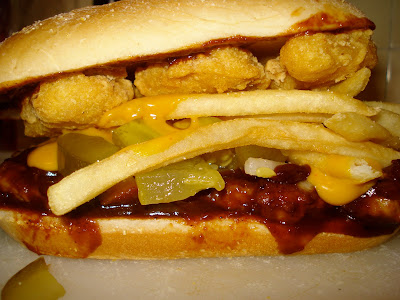 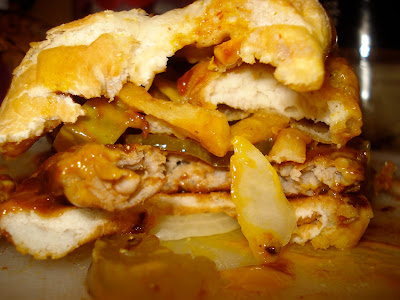 I was driving up Fair Oaks the other day and saw a beautiful sign on a lamppost just south of McDonald's: McRib is back. I excitedly jammed on the brakes and swerved across two lanes of traffic, causing a three car accident and narrowly missing a couple of strollers. (Perhaps that's a bit of an exaggeration. I cautiously changed lanes and, to avoid braking too aggressively, I decided to just drive around the block. I'm not as exciting as I used to be.)
I took the McRib home and starting photographing it. (Even the cat was laughing at me, I think.) It had been many years since I'd had a McRib and I didn't really have fond memories of it, but in recent months I'd been hoping for its return, if only so that I could write about it. Not that it would require much effort; a boneless pork patty formed into the shape of a rack of ribs pretty much writes itself. Some pictures are worth one thousand words, some are worth infinitely more.
It really wasn't very good. The pork  tasted like a cheap pork chop and the sauce was that particular kind of sauce I hate: it tasted like burnt ketchup and sugar. Well, I thought, that was certainly a letdown. I will never get one of these again, that's for sure.
And then a couple nights later Elizabeth sent me a text that she was going to have sushi after work with one of her coworkers. So, having a short term memory and just overall not being terribly bright, I thought Hey, maybe if I get the McRib and put some Carolina-style mustard sauce on it, it will be good.
So I travelled the four blocks to McDonald's and got myself a McRib, a small order of McNuggets, and a small order of fries. Back home, I took my McRib out of the bag. The previous time it was served in a box marked "Created Just For You," which I pretended was actually true, and it made me feel special. This time I had a box labeled "5 Chicken Selects" with a sticker reading "Double-Checked For Accuracy." I desperately wanted it to be chicken strips so that I could point out the irony of that sticker. (I don't really care what I eat anymore, I guess, as long as I can make fun of it.) But it turned out it was the McRib.
Unfortunately, I no longer had any of my Carolina mustard sauce. I must have finished it with some breakfast sausage the other day. Now the sandwich wasn't going to taste like true Southern barbecue. Undeterred, I came up with another plan. A couple weeks ago I bought a jar of Famous Dave's "Signature Spicy Pickle Spears," hoping they would be spicy, as promised. They were not. But they're still somewhat tasty, and Famous Dave's is a barbecue chain, so I sliced some of them up and added them to the sandwich.
I also put on a whole packet of McDonald's hot mustard sauce, which is one of my top three favorite fast food condiments. (The others are Arby's Horsey Sauce and Popeye's Delta Sauce.) Once the mustard and pickles were on, I looked at the sandwich and thought Aw hell, why not? So I added three McNuggets and a handful of fries as well, thinking if I couldn't have a barbecue sandwich, I could at least make the McRib taste better.
As soon as I bit into it I saw the error in my logic. I don't think anything can complement the McRib patty. It's just not good. All I could think was Hey, I'm eating some tasty McNuggets and fries and something nasty. What is that? Oh, right, the McRib.
I don't think I'll ever eat one of these again.
Posted by JustinM at 12:26 PM

My brother loved these when he was younger. He would become sad when the promtion ended and they would be off the menu. I wonder if he tried one today, would he still like it?

My guess would be no.

Is McD's really real Rib meat?
And, if it is, I might not wanna know whose rib I might be eating.

I don't know, but my guess is no to that question, too. Their commercials claim "real pork" which I find amusing.

Happy to have you be the cannery in the mine. Mental note...stick to the Mac