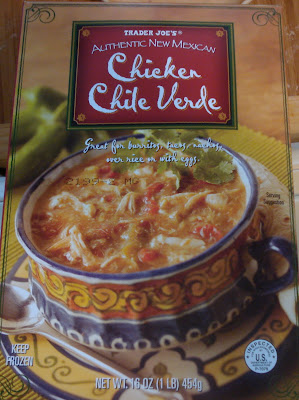 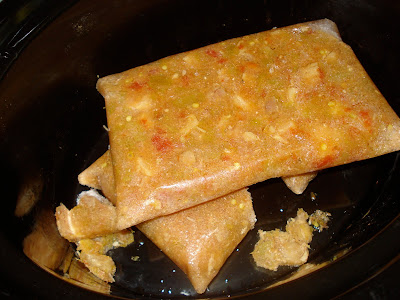 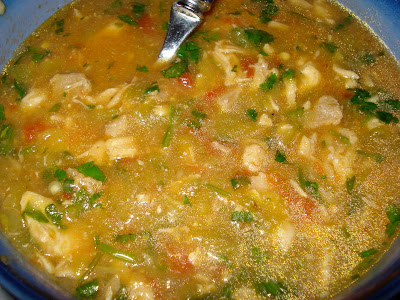 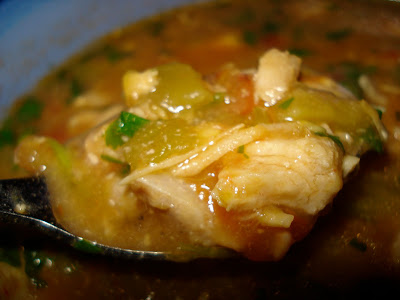 Friday night I kept dinner simple - a box of Trader Joe's chicken chile verde. This is one of my favorite items from TJ's, although lately they've been out of it frequently. I asked an employee if that means it's on its way out (the constant running-out was what happened to two of my favorite products ever from TJ's, the goat cheese empanadas and the chimichurri sauce, before they disappeared forever.) He assured me that they would not get rid of the chile verde, that it is one of their best sellers. I hope that's correct because it's delicious, simple and cheap.
I usually cook a couple boxes of it in the slow cooker for a few hours and then add a handful of fresh cilantro to it. Sometimes the pieces of chicken are inferior and I add hot sauce and sour cream to the stew, but most of the time it is very good. Friday night it did not require any extra condiments. 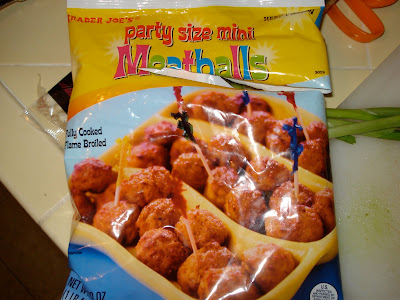 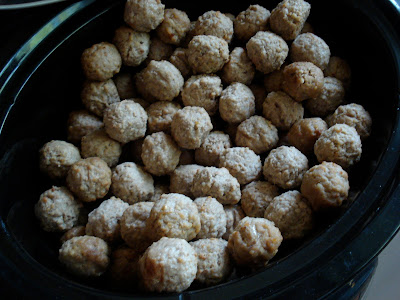 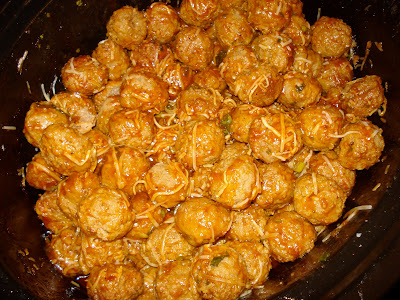 Saturday, in preparation for our friends Jim and Rachel's annual "Hot Buttered Rum" party, Elizabeth and I prepared some foods, which we snacked on for lunch. I cooked several bags of Trader Joe's "party size" meatballs. I have a method of preparation that makes these meatballs very popular at parties. It's a secret, though, so I can't tell you. Nah, I'm just kidding. I reduce a can of Draught Guinness with some balsamic vinegar and honey to about a cup, then cook the meatballs and reduction in the slow cooker for a few hours. When they are done I chop up some green onions and add them, along with some parmesan cheese. 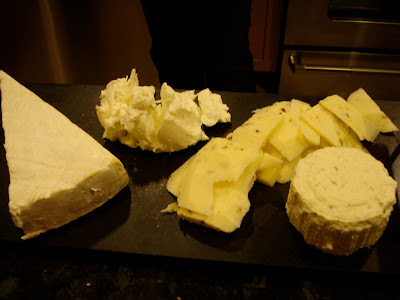 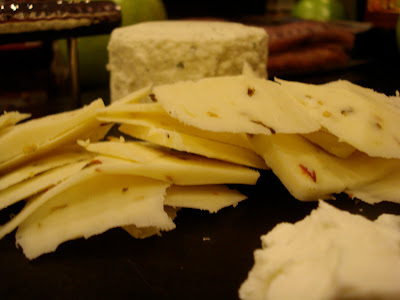 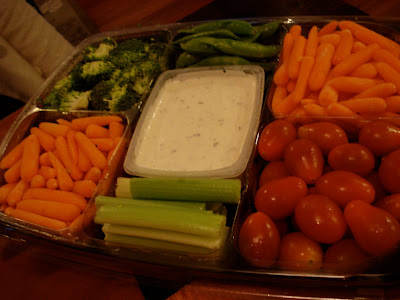 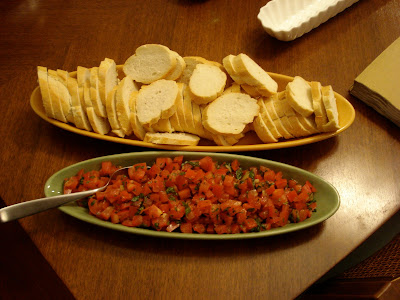 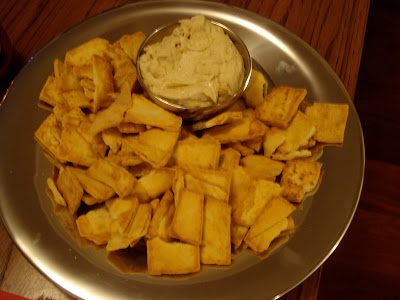 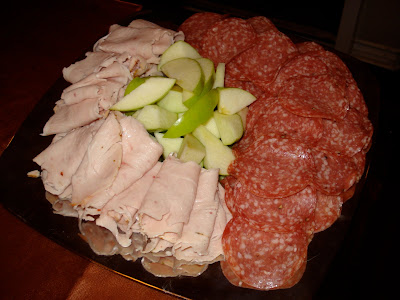 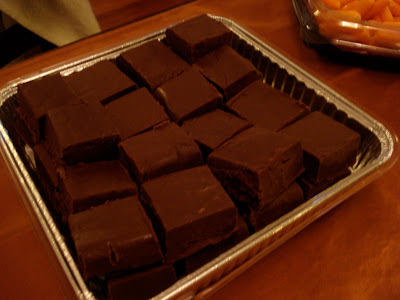 This is a sampling of the foods we had at the party: the usual selection of cheeses and crudites, a bruschetta that Eizabeth made with some sliced bread, pita chips with hummus, a platter of turkey, apple and salami, and fudge. I had some of all of these (well, not the fudge) but mostly I ate turkey and salami. They are very few food combinations I enjoy more than turkey and salami. 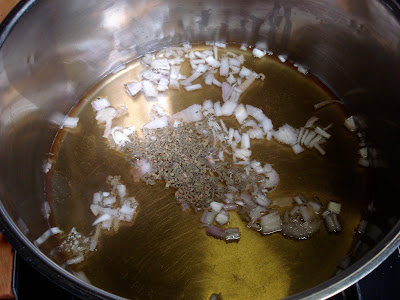 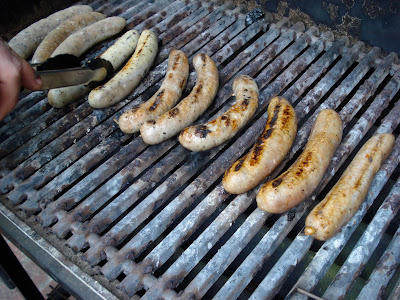 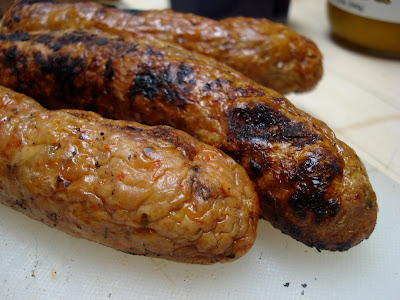 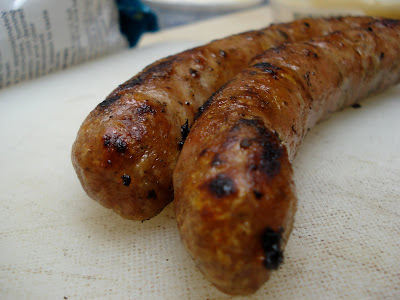 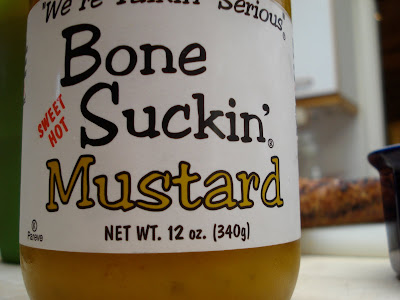 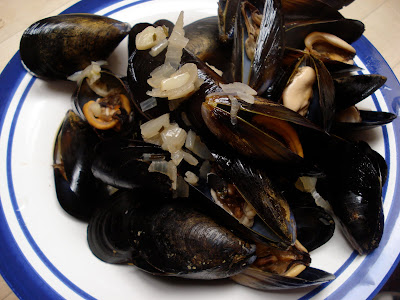 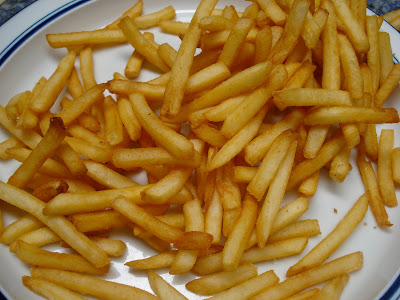 Sunday was my dad's birthday, so Elizabeth and I went over to my parents' house for lunch. I cooked mussels for my dad and Elizabeth (it's one of their favorite foods)  and my brother grilled sausages for himself, me, and our mom. The sausages were from Whole Foods and there were three different kinds: garlic and basil chicken, pork bratwurst, and hot Italian.
The flavors of the sausages were okay, but overall I was extremely disappointed in them. They all were very dry and much too salty. I had to use a lot of spicy mustard on the sausage. I do not plan to ever get Whole Foods sausage again. It's too expensive and low quality. From now on I will go up to Schreiner's in Montrose and get sausages, or stop by their stand at the South Pas farmers market.
The mussels were much better. (I had wanted to get about four pounds but they only had about two and a half pounds of mussels left in the entire store.) I boiled a wheat beer with shallots, garlic and thyme. (I forgot to add butter to the broth like I always do, because I am a moron.) I steamed the mussels in the pot for about six minutes, then emptied them in a couple of bowls.
I fried some shoestring fries in a pot of oil, and they were good, but really I enjoyed dipping crostini from Nicole's into the beer broth more than eating fries. 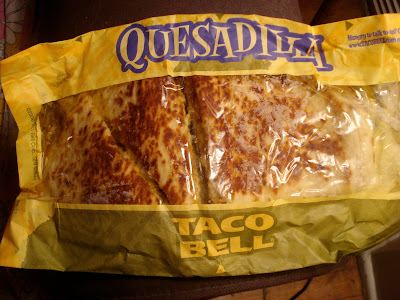 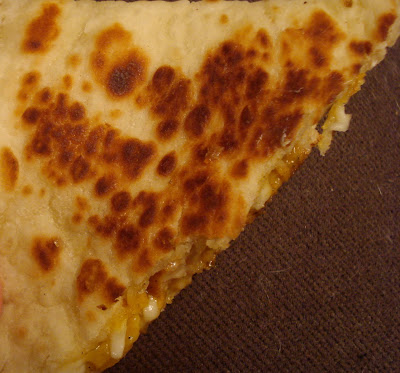 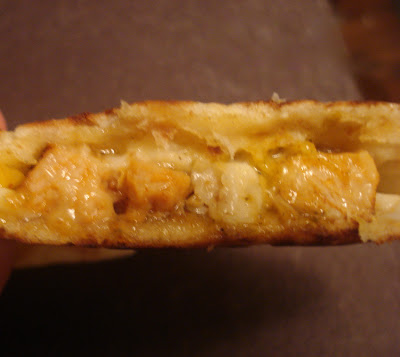 Sunday night, Elizabeth and I bought a Christmas tree at Home Depot and decided to get some fast food and decorate the tree. We went by Taco Bell. I've only been to this Taco Bell once before and it was a lousy experience. This time was worse. We waited in the drive-through for about twenty minutes. I hate doing this, but we both felt like just getting food and going home.
I could barely hear the guy over the speaker box and he could barely hear me, so we had to yell at each other and repeat ourselves four times. I asked if they still had Volcano Tacos and he said yes, so I ordered three. Elizabeth ordered two soft taco supremes and I ordered a chicken quesadilla just because it was new and I wanted to try it.
We got up to to the window and the guy said "I was wrong, we don't have Volcano Tacos anymore." (I mean... they have maybe ten items on the menu. It's not like he has to remember a 200 item wine list.) So I just took my quesadilla and Elizabeth's tacos.
Well, actually, I took Elizabeth's taco. Even though I had ordered two and he repeated it four times, he still only gave us one taco. (Remember Joe Peschi in Lethal Weapon 2?... "They f**k you at the drive-through!") So neither of us had gotten what we wanted. So we went to Wendy's, too. 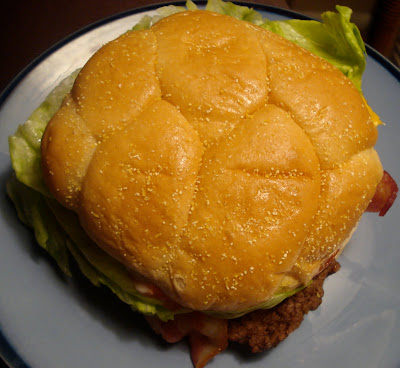 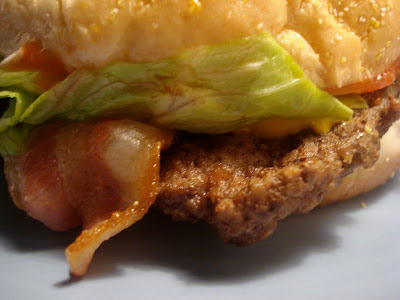 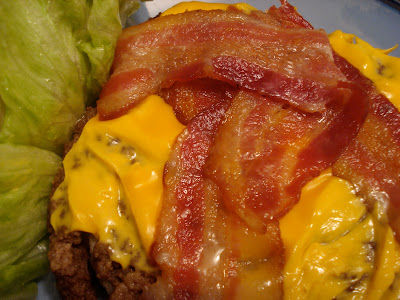 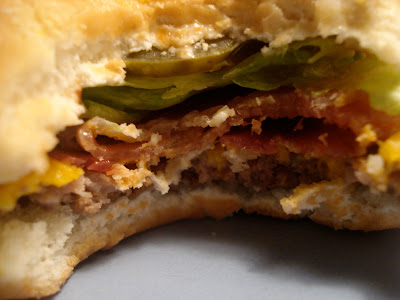 I've been thinking about trying Wendy's Baconator since I first heard of it. I hate almost all fast food bacon - because it's usually cheap, disgusting, fatty meat. (Arby's is pretty much the only fast food place that has edible bacon.) But Wendy's makes a big deal about their "applewood smoked bacon," so I figured I should give it a try.
I wasn't very impressed with it when I saw it. Yes, it looked a little less fatty than the bacon on most fast food burgers, but that's like saying Striptease is a slightly better movie than Showgirls. It's not saying much. And indeed it was better than most fast food burgers, but I didn't like it very much and I did not eat all of it. It certainly does not compare to Arby's bacon and I will never order this burger again.
Posted by JustinM at 6:14 PM

Good to know about the Chicken Chile Verde at TJ's. I will have to try it sometime because I love Chile Verde! Slow cooking it sounds fun too, it would make me felt like I slaved on it for hours ;)

Definitely give it a try. I think it's $3.29 for a box. You can cook it in a pan and it's ready in ten minutes, but in the slow cooker the flavors meld together much better.

By itself a box doesn't quite serve two, but when you put it over rice or tortilla chips, one box is an ample amount.

Funny how some of their frozen stuff is so good and some is awful.

Definitely. Some things - the tempura chicken, chicken chile verde, frozen pizzas, almost all seafood, and the feta bites with caramelized onion are all really good. But so many things - the orange chicken, the different types of fries, and the chilaquiles (which were the worst thing I have ever had from Trader Joe's, bar none) are all pretty bad.

Aw, man, I thought this was one of my healthier weekends! Oh well. (I met a woman at a party over the weekend who expressed surprise that I am "not 500 pounds.")

I would cry bitter tears of sadness if they ever discontinued the Chicken Chile Verde. Over rice with some fried eggs on top and a crusty baguette to soak up the yolky-brothy-goodness is one of my favorite weekend breakfasts.

The Chicken Chile Verde has become one of my absolute favorites too!

Hahahahaha... Taco Bell. You must have been REALLY hungry and desperate!

The last time I went to Taco Bell was with you. You know, way back when. We ate in your car before doing our weird version of Rain Man/The Color of Money. Remember that? What was that place called? Shithole comes to mind, but I'm pretty sure that's not the 'official' name.

Yes, I remember, the 2004 MLB playoffs. I think it was game 7 of the NLDS. And the Taco Bell commercial came on and we both thought it looked good. You said you would go if I drove. I said I would drive but if we went all the way up to north Lake Ave we had to go the the Rancho. You agreed and then held serve on the pool table for 2 or 3 hours. Then I took you back home and got a text message a while later that Amy was asleep so you weren't in trouble at all.

Ahhh...The Rancho. I don't know why, but I always think that place is called the Buccaneer.