A Child's Christmas in Pasadena 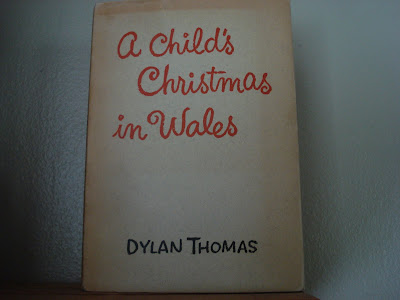 Ok, I'm not really a child anymore, but it gives me a chance to borrow the title of one of my favorite pieces of writing: Dylan Thomas's A Child's Christmas in Wales. Two years ago, for Christmas, Elizabeth gave me a first edition copy of it, which I keep on a shelf in our living room and read every Christmas Eve. 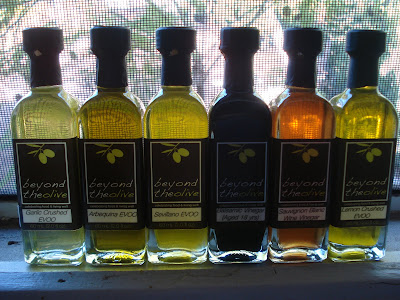 On December 23rd., I went to dinner at Gale's with Elizabeth, my parents, and my brother. My parents gave us a set of olive oils and vinegars from Beyond the Olive. 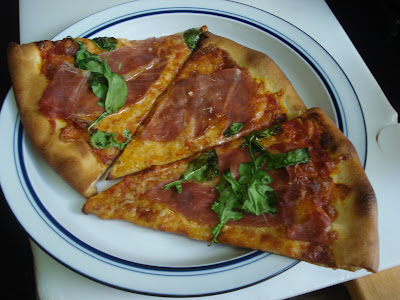 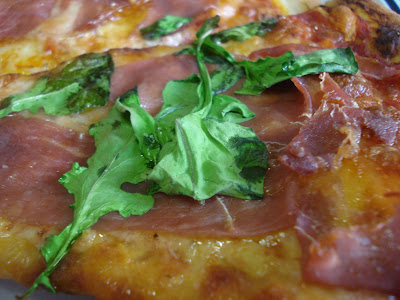 On the morning of Christmas Eve I dropped Elizabeth off at the airport and went over to my parents' house. There wasn't anything for breakfast, so I reheated my leftover pizza from Gale's: prosciutto and arugula. The night before, both my dad and I had ordered pizza, and we both agreed the dough wasn't cooked long enough. But after reheating it in the oven, it was perfect. 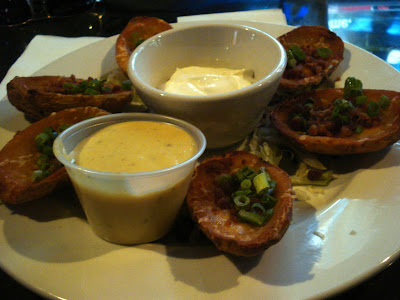 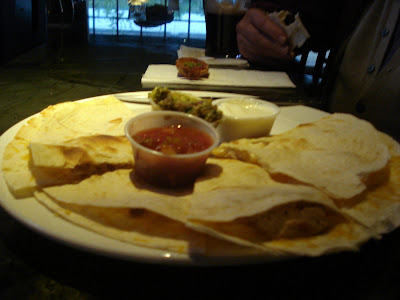 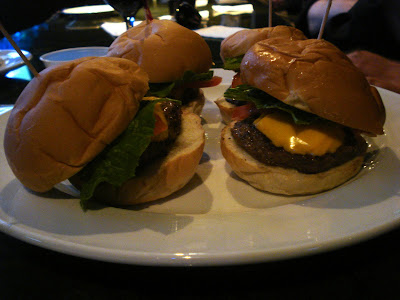 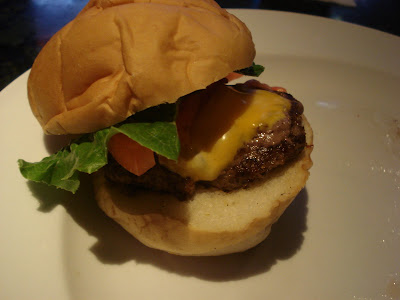 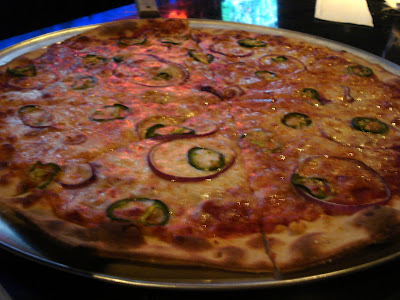 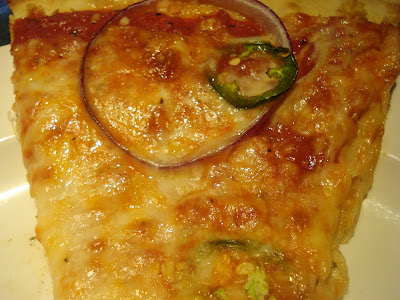 After watching one of the worst movies I have ever seen (Angels & Demons; Ron Howard should get a special prize for somehow managing to make a movie even worse than The Da Vinci Code)- I headed over to Old Pasadena to hang out with some friends on Christmas Eve. We started out at 72 North. I got a snack of potato skins and my friend Carla got a chicken quesadilla. The skins were pretty dried out, although the honey mustard was great. The quesadilla was good but nothing special.
-
Eventually my friends Dave and Min, who had to cancel their trip to the east coast at the last minute, came by. They got an order of sliders and a large pizza with red onion, garlic, and jalapeno. I have had the sliders before and did not think they were very good, but these are a new and much improved version. The buns were fresh and the beef actually tasted like beef. The pizza was, unbelievably, the best pizza I have had in a long time. I never would have expected a bar - in Old Town, no less - to have such great pizza. Min proclaimed it the best she's ever had. Dave and I weren't ready to go that far, but we did agree it was the closest to authentic New York style pizza that we have had in a long time. 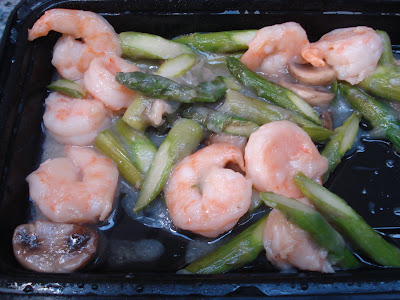 On Christmas morning I went back over to my parents' house and discovered they had had Panda Inn the night before. (We don't have the traditional Christmas celebrations in my family, if you hadn't already guessed.) I had a couple bites of leftover shrimp and vegetables before I started making breakfast for everyone. 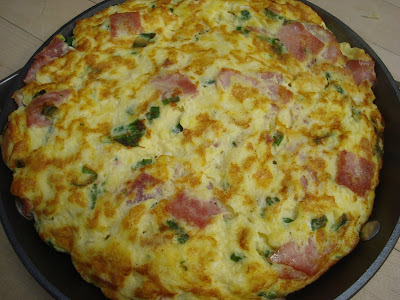 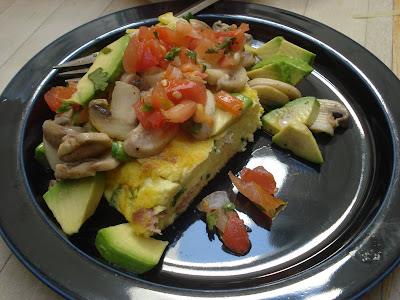 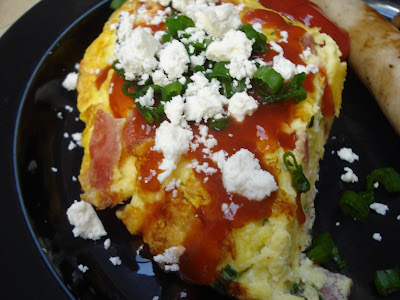 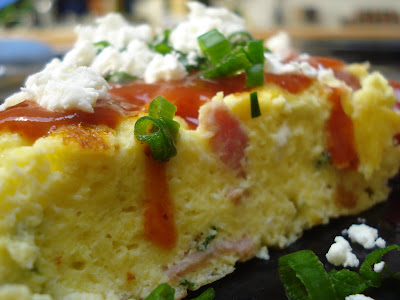 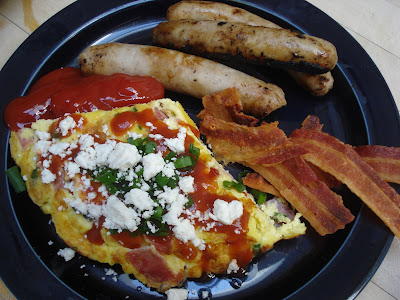 For Mother's Day, my brother and I got my mom a frittata pan at Williams Sonoma. So that's what I made for everyone for breakfast. I beat some eggs with plenty of cheddar cheese, jarlsberg cheese, green onions and ham, then cooked it in the pan.
My mom added avocado, salsa and mushrooms to her piece of frittata. It looked like one of the worst things I have ever seen, but she told me I had to take a picture of it because "other people will love it." So I did. My piece was much more to my liking: hot sauce and Humboldt Fog. I am not a big fan of breakfast, but I loved this. I would gladly eat this every day if it didn't take so much effort to make. 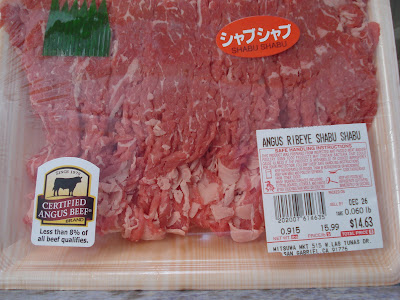 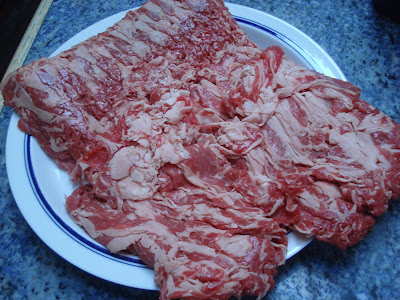 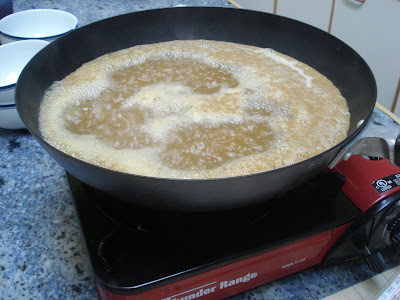 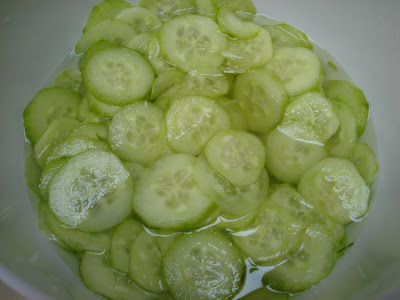 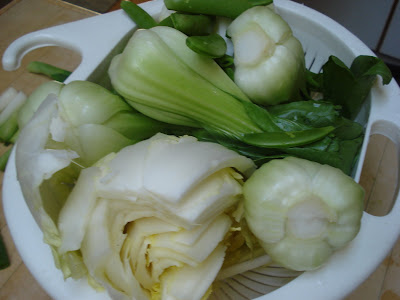 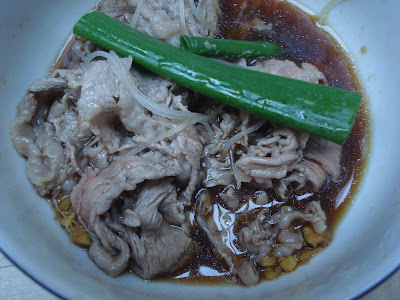 For lunch we made shabu-shabu. I'm not sure who came up with this idea, but it was a good one. We boiled broth and added vegetables and cooked thinly sliced ribeye steak in it. My mom made a dish of sliced cucumbers in vinegar that was probably the only cucumber dish I have ever liked.
-
So those were my Christmas eats. Looking back, it's kind of a strange selection. But, whatever. I had a great Christmas, and I hope you did, too.
Posted by JustinM at 5:27 PM

That pizza looks good. It would probably taste good if the onion and jalapeno were removed (personal preference).

I have a couple of random questions for you:
1. Have you seen movies like Supersize Me and Food Inc.? What do you think about them? If necessary, I fully approve a whole post dedicated to this question.
2. Have you ever had a burrito from Chipotle?
3. What percentage of your eating would you say is done from the grocery store/restaurants? Like maybe 35% restaurant, 65% grocery store? Just curious.

That frittata looks absolutely amazing. Your mom is right, by the way.