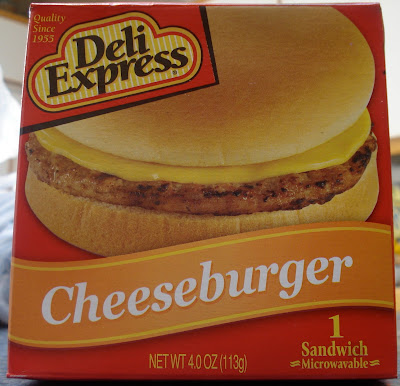 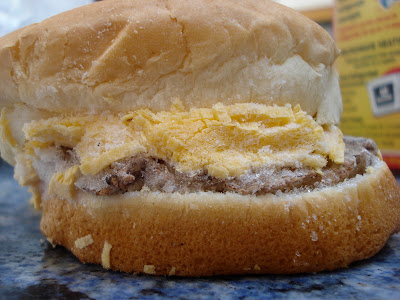 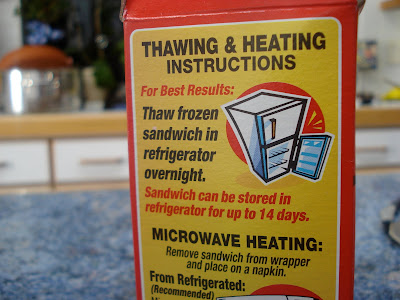 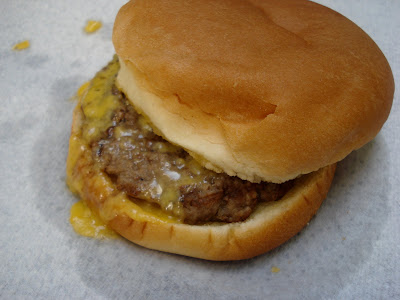 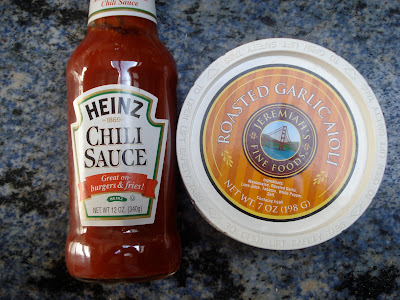 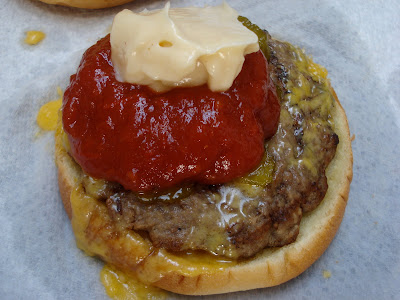 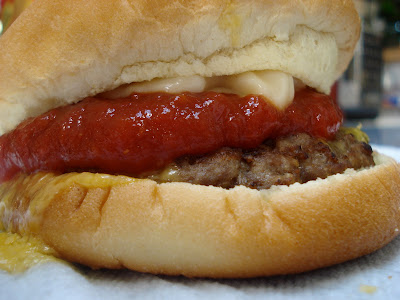 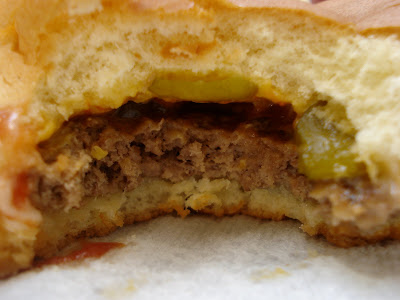 I was at Albertson's and trying to decide what I wanted for lunch. Have you ever been so hungry that you would eat anything, and yet nothing sounds good to you? I picked up a bag of popcorn shrimp then put it back a couple minutes later. I looked at three different kinds of pizza, even putting one of them in my basket, but eventually decided I didn't want pizza. I grabbed a pastrami wrap out of the deli case, took a bite of it, decided I didn't like it and put it back in the case. (Actually that's a lie; I just wanted to see if you were paying attention.)
Eventually I decided to cook some frozen mini corn dogs that were on sale. Then, out of the corner of my eye, I spied a frozen microwavable hamburger, pushed way back on the shelf and in a box that was kind of crushed up. It looked like it might have been sitting there since Bush was President. The first Bush. It was on sale, too, marked down from about three dollars to $1.69. I rarely use the microwave, and I almost never cook entrees in the microwave, but this burger mesmerized me. Maybe it was reminding me of the MicroMagic hamburgers I ate when I was a kid and didn't know any better. Or maybe it was just a bizarre need to try something that I was sure was going to be truly horrendous.
It wouldn't even scan at the checkout. That's always a good sign when buying a product that looks like it's been sitting in the freezer for years: it predates scanning technology. I was half-expecting the clerk to say something along the lines of "Wow, the old-timers tell stories about these, but I've never actually seen one." Instead he said somthing equally amusing: "Do you know how much this is?"
"$1.69," I told him, although I'm guessing I could have said "29 cents" and it wouldn't have mattered.
Ten minutes later I unwrapped the package. It looked exactly as I expected: a frozen rock of bread and something that might have once been cheese, all covered with a quarter-inch of ice crystals. I suppose it's not really possible to feel ripped off by something that cost $1.69, but this is probably as close as you can get.
On the side of the box was this advice: "For Best Results: Thaw frozen sandwich in refrigerator overnight." I loved this. Yeah, I'm sure thawing this sandwich overnight before microwaving it is going to make a big difference. (I immediately pictured the end of the night at The French Laundry and Thomas Keller yelling at the chefs "Don't forget to put the frozen burgers in the fridge or they won't be ready for tomorrow!")
I put it in the microwave for 90 seconds. Expecting the absolute worst - and really, looking at that burger when it came out of the microwave, how could I not? - I sliced up some gherkin pieces and threw them on the sandwich, covering them with a deluge of Heinz chili sauce and garlic aioli. I closed my eyes and took a bite.
Other than a few sections of the bread that were rock-hard, it wasn't terrible. It tasted like a slightly inferior, larger version of frozen White Castle burgers. In other words, it did not have much taste at all, just that of the condiments I had added. Will I ever eat one of these again? No. Am I glad I did? Well... no, not really. But it felt like something I needed to do, some desire to be a canary in the coal mine for anyone who might be thinking about eating frozen $1.69 cheeseburgers. (Admittedly, there probably aren't many of you.)
Posted by JustinM at 9:39 AM

Was there an expiration date on the box? I like that it says "Quality Since 1955" as it makes me think that the burger was packaged in 1962 or so. Also, is that grease or water surrounding the burger on the paper towel?

Diana: I think it was the melted ice (which I guess is more accurately called water) from the burger, but who knows? I kind of gave up asking questions as soon as I opened it.

Taqeau: But I could eat 44 of these for the price of my surf & turf from the Chop House!

Does any of the stuff you eat ever make you sick?

Luckily, I have a pretty iron stomach. I can only remember getting sick a couple of times as an adult, once from a seafood chain, and another time when I ate the "shrimp special" at a cafe in Montana (which, let's be honest, is my fault for ordering.)

Years ago, when I used to go out to bars much more frequently than I do now, I would often go to Hooters during PAC 10 basketball season, because they were one of the few places in Old Town capable of getting more than 2 games at once. Sometimes I would order food, and I almost always had an upset stomach afterwards, but I never actually got sick.

They sell Deli Express sandwiches (not frozen, just refrigerated) at the gas station up the street. They are different from this, they are wrapped in paper and don't come in a box. I can bring it home and nuke it, still in the paper wrap, for 75 seconds.

It's actually pretty decent in a pinch, but I try not to get them that often because the "meat" is mostly soy and it costs $3.39 for a damn burger. That's pretty expensive for something that makes a $1.50 double cheeseburger at McDonald's seem like a homemade delicacy.

By the way, ProTip: when microwaving something like a burger, flip it over about half-way through cooking to prevent rock-hard sections of bun.

We have these deli express burgers at the mom and pop grocery store where i work. We employees eat these if we are broke, short on time for lunch, or otherwise hungry as heck. We joke about the content of the meat that makes up the "100% beef", and all-in-all its a quick bite to it that isnt half bad in a pinch. Just check you cholesterol after. I believe it may have spiked a few points.

That's awesome. Where are you located? (City/State?) I have not had one since 2009. I like getting White Castle there days when they're on sale, stocking the freezer, and adding toppings to them. Usually when drunk.