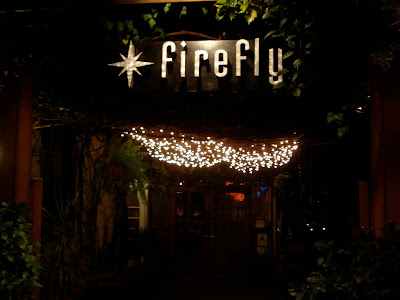 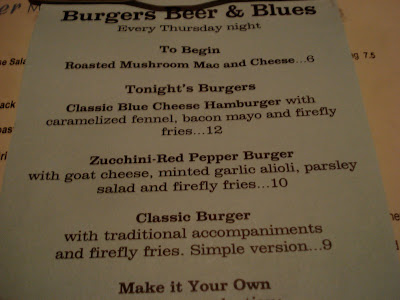 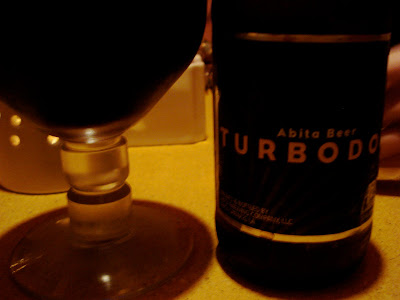 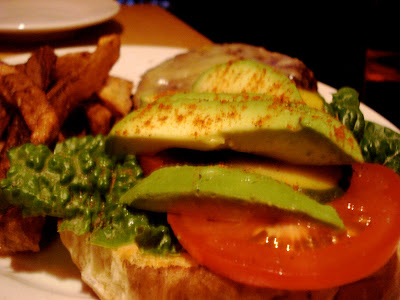 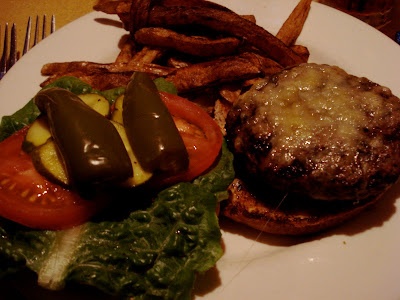 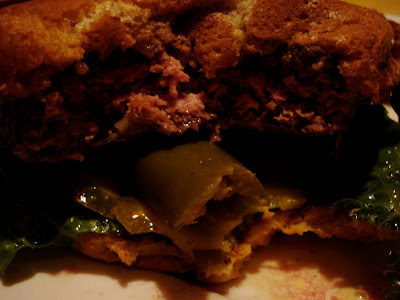 "You know I fed you when you hungry baby, held you when you're sad
I gave you everything, mama, that I ever had
You know I did, you never helped me at all
Give me back that wig I bought you, let your goddamn head go bald"
-  "Statesboro Blues"
I wrote about Firefly Bistro one year ago, when I went to the Sunday "Blues Brunch." It was a great time, but I don't think I have been back. The other day I checked out Firefly's website to see what their winter menu looks like, and I noticed they are doing Thursday night "Burgers, Beer and Blues." I knew Elizabeth was leaving work an hour earlier than usual on Thursday, and I knew my parents had never been to the South Pasadena farmers market and wanted to go, so I suggested we all go to Firefly for dinner. My dad is almost surely the person most responsible for me loving the blues. When I was 15, and my CD collection consisted mostly of Snoop Dogg and Dr. Dre, I put on one of his Muddy Waters CDs one night just for the hell of it. I have never looked at music the same.
The farmers market was as slow as I have ever seen it, perhaps one-tenth the number of people who would be there on a summer evening at the same time. Still, we bought a few things and sat down for dinner. My parents and Elizabeth all ordered iced teas, and I did as well, but then saw Abita Turbodog on the menu and quickly ordered one. There aren't many things I love more than a proper pint of Guinness, but Turbodog is one of them. We all ordered burgers: my mom, Elizabeth and I ordered the classic burger (adding different toppings to it); my dad ordered the burger special of the night: blue cheese with caramelized fennel and bacon mayo (two things I have never heard of and did not sound good, but it was his burger.)
We listened to the blues while we waited for our food. I'd forgotten how much I enjoy Barry Brenner. He played several rock & roll songs that he rearranged into a blues format ("The Weight," "Willin'" ), he did a beautiful version of "Statesboro Blues," and he did a version of "Just Like Tom Thumb's Blues" that was probably  the second-best version I have ever heard. (The best version, unquestionably, was Dylan & the Hawks on their 1966 tour. Check out this youtube clip if you want to hear what rock sounded like once upon a time. It's possible that better rock has been made since then, but I haven't heard it.)
All our burgers arrived after just a few minutes. Curiously, although we had requested them cooked three different ways, they all appeared to be medium-rare. That's how I ordered mine, though, so I'm not complaining. (Nobody else did either; the meat at Firefly is very high quality.) I only took pictures of my burger and Elizabeth's. Hers, the first pictured, came with gruyere cheese and avocado slices dusted with red chili. My burger had gruyere as well, with pickled jalapeno peppers.  It was fantastic: spicy, juicy, cheesy... it was one of those burgers you get on occasion that needs no condiments.
The fries that came with burgers were worthless: limp, soggy pieces of potato that served no purpose other than sweating oil onto the plate. But the burger was so good I didn't really care. (And, to be honest, I ate all my fries and a couple of Elizabeth's.) Barry finished his penultimate set of the evening just as we finished our dinner, and, although it was tempting to have a couple more Turbodogs and listen to his last set, we left.
I can highly recommend checking out Firefly for some Burgers and Blues on a Thursday night.
Posted by JustinM at 5:44 PM

It was a lovely winter evening. The burger was absolutely delicious. I want to do this again and again. Cotton candy for dessert; cheese and pate from Nicole's for the next day; and an evening with part of my family -- perfect.

Wow, those are the least expensive dinner items I have ever seen at Firefly.

Seriously. I think the four of us ate there (four burgers, four iced teas, one beer) for less than my entree at the Chop House last week. Not a bad deal, even before you factor in hearing great music.

Yum! Those burgers look great! I use a Canon Powershot and then kind of play with the photos with my photo editing program :)

I had their Burgers & Beer. Then, it gave me the Blues?

There has to be a better ad line for a restaurant.

Then you are now qualified to sing the blues. Like Ralph Macchio in Crossroads when Jami Gertz leaves him.

(By the way, Ralphie outdueling the Devil's handpicked guitarist has got to be one of the most unrealistic movie scenes ever, right up there with Al Pacino beating up Henry Rollins in Heat and the plot of any M. Night Shaymalan movie.)