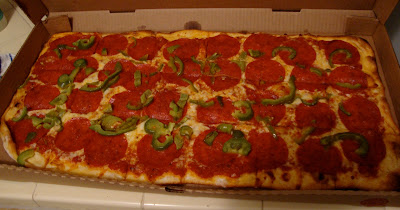 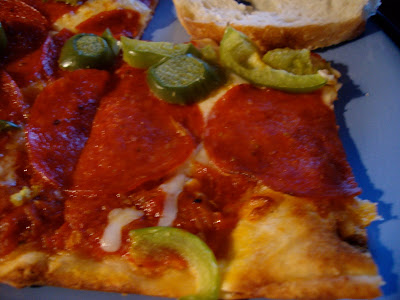 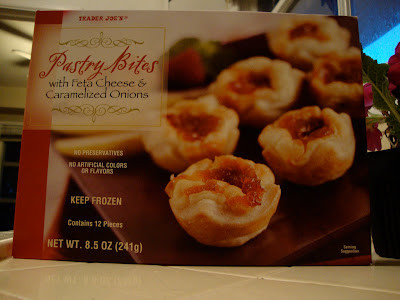 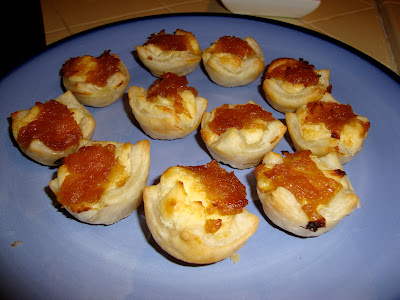 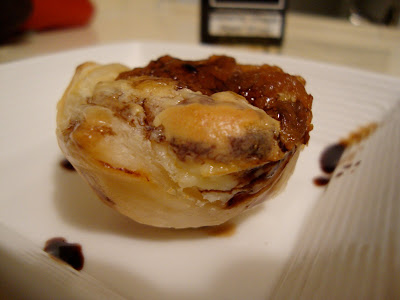 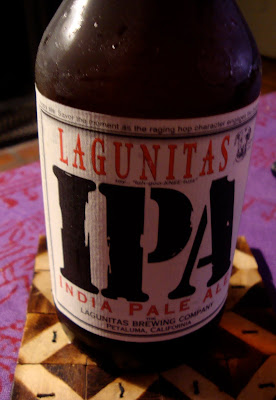 I have a friend - I'm not writing his name but anyone who knows him will know exactly who I'm talking about in a few seconds - who gets completely bored being at home. He lives in a beautiful loft with high ceilings and a couple of big screen TVs, the kind of place most people would love to relax on a Sunday evening. But he was going out of his mind with boredom last night and eventually sent me a text asking if he could bring over some pizza and beer and hang out with me and Elizabeth.
"Sure," I said.
He lives very close to Buca di Beppo and asked if that was okay to get. I have said some very harsh things about Buca in the past, and I hope I don't ever have to eat there again, but pizza happens to be the only thing I have ever had from there that I did not think was terrible. Plus, if someone offers to buy you pizza and beer, you can't really complain about what kind, you know?
I cooked some Trader Joe's "feta cheese and caramelized onion bites" as an appetizer. I have always loved these, especially drizzled with a little balsamic vinegar. (I added the last drops of the 18 year balsamic that was part of the set my parents' gave us for Christmas.) The beer for the evening was Lagunitas IPA, an extremely hoppy IPA from Marin County. I have not had one of these in years - although I believe stashed in a drawer somewhere I have a t shirt with the old Lagunitas IPA logo on it - and I'd forgotten how good it is.
The pizza was pepperoni and bell pepper, at least two feet long. The three of us could only eat about two-thirds of it. The crust was insubstantial but the sauce was delicious. The toppings were neither better nor worse than any pizza chain would provide. At any rate, I had five slices and was happy.
Huell Howser turned out to be a fourteen-year old episode of him visiting Havana, Cuba (he asked a hotel employee who claimed to be a Lakers fan if the guy had heard that "Magic is back") so we only watched a few minutes of it and I spent most of the evening flipping channels.
Posted by JustinM at 12:46 PM

The 3 of you couldn't finish a 2foot Pizza??
It mustn't have been good or y'all weren't hungry, cuz I could've finished that on my own! Seriously.

If I've ever met a pizza I didn't like, it's been only one. And, I can't even recall it.

Bucca di Beppo, hehe. After my first (and last) visit I decided that the name Bucca di Beppo must be Italian for "Creepy Clown" or something like that. I later discovered that it meant "Joe's Basement". Who knew that Italians call guys named Joe "Beppo"? No weirder than girls named Margeret being called "Peg". Anyway, as I recall, the food was the most severe of "landfill" Italian, all starch and garlic - thoroughly disgusting. That pizza looks alright though...good call loft guy.