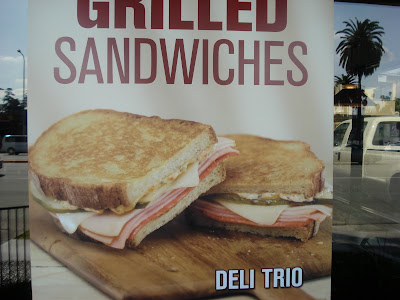 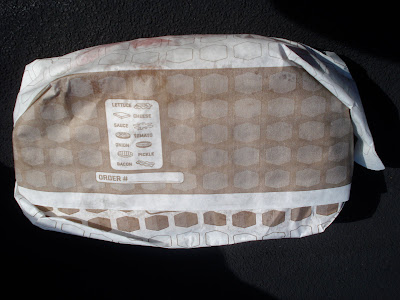 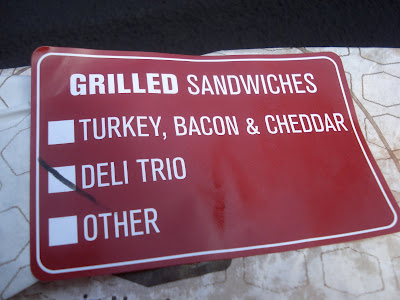 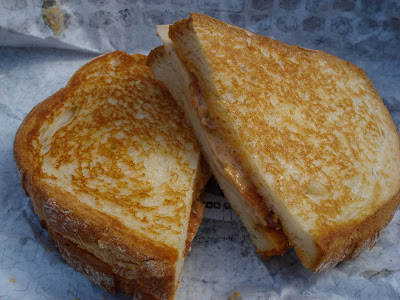 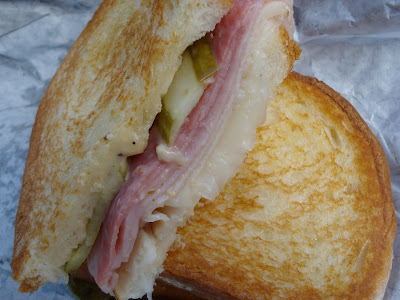 My first real grilled sandwich - not grilled cheese my mom made me when I was a kid or the godawful smashed chicken sandwiches I sometimes ate from the junior high cafeteria - was a streetcart panini in Italy, a gorgeous, pressed sandwich, bread with symmetrical grill lines that inspired at least a minute of uninterrupted eye contact. It would have been longer but I had a hangover and needed food. The interior of the sandwich was a revelation: like fondue with pancetta and basil. The insides dripped onto the ground like a Jackson Pollock painting and stained the soccer jersey I'd bought the day before.
A couple days later I ordered a similar looking panini in Rome and found it was full of tomatoes; I gave it to a kid and ate at the McDonald's by the Spanish Steps.
In the years that followed, I made many sandwiches that were better-than-grilled-cheese-but-less-than-panini, thanks in no small part to my George Foreman Grill. Eventually my brother turned me on to the Santa Fe Turkey panini at Bristol Farms and I ate them frequently. A few years ago on Halloween I bought a panini press at Sur La Table, one of the best purchases I have ever made. Porta Via makes very nice panini, but by the time they opened I was already a bit of an expert and have not felt the need to pay someone else to make them for me.
When Jack in the Box announced earlier this month that they would be selling grilled sandwiches, I did not think much of it. This is, after all, Jack in the Box. While they have come out with some tasty items over the years, it's still fast food. But recently my friend Zach and I were cruising around on a nice day and decided to stop in and give the sandwiches a try.
There are two varieties: the turkey, bacon and cheddar, and the deli trio. I ordered the latter. Zach requested the former with no cheese. (He is a lover of wine and good food but does not like cheese. I've never understood this.) It took at least ten minutes to get our sandwiches - the manager apologized - and we took them and sat in the back of Zach's truck.
I did not try any of Zach's, but the ingredients in my deli trio - Genoa salami, roasted turkey and ham - were surprisingly good, as was the bread. Unfortunately, the "creamy Italian dressing" was disgusting: a sweet, oily mix of corn syrup and soybean oil that I think was supposed to contain a cheese flavor, although I can't be sure. It pretty much ruined the sandwich.
I am sure I will never get one of these again - I can't see any conceivable scenario in which I would - but, without the dressing, it would actually be a good sandwich. (I ate this several days ago; today, February 23rd, Jack in the Box is giving away a free grilled sandwich with the purchase of a large drink.)
Posted by JustinM at 9:41 AM

I have been without Jack for the last four months, and not once have I missed it. Personally, I think they've been going downhill since they got rid of the toasted raviolis 15 years ago.