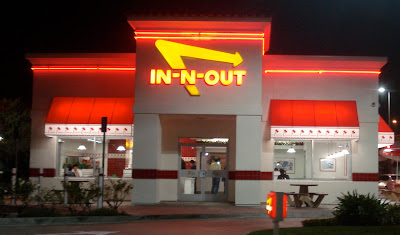 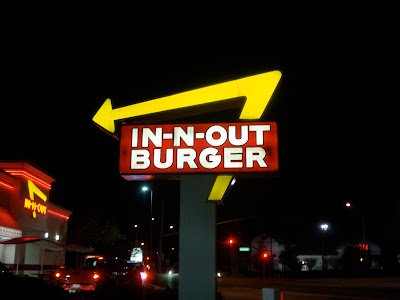 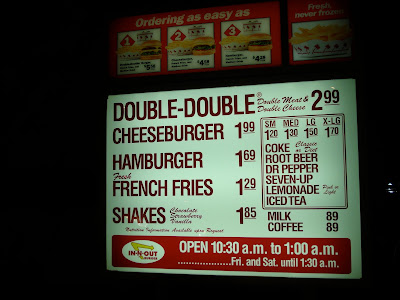 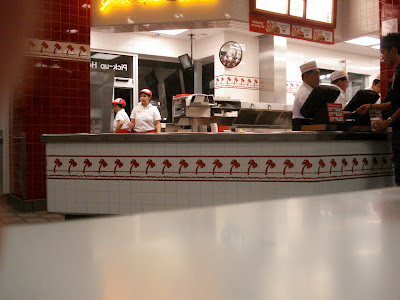 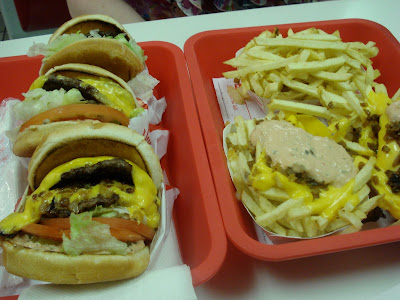 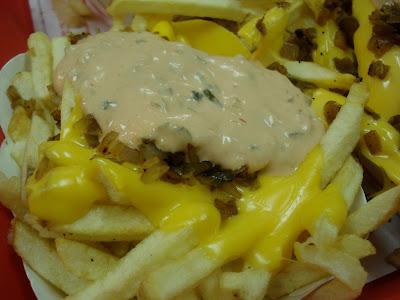 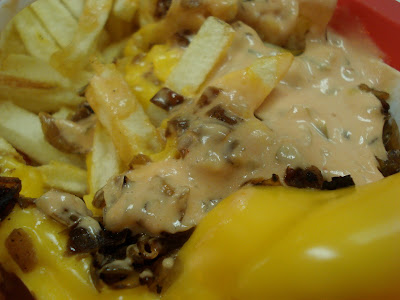 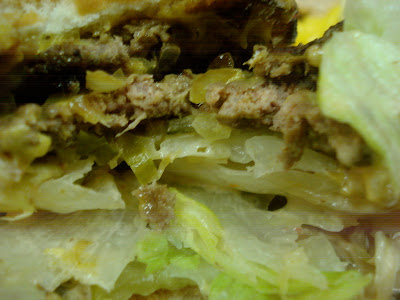 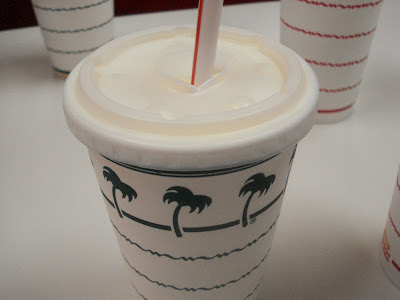 Writing about In-N-Out, for anyone who grew up in Southern California, is basically memoir writing. I don't know a single person who cannot tell countless anecdotes about the place. There are very few friends of mine with whom I do not share at least one In-N-Out adventure.
My grandmother frequently picked up my brother and me from elementary school and took us by the In-N-Out a couple blocks away. Our order was always the same: two pink lemonades and two orders of fries, in separate sacks. We had both learned the hard way that was the only chance of not fighting over splitting the fries. I was stronger but my Nana favored my brother; I always won the battle but lost the war.
There was an In-N-Out a few miles from my high school. We couldn't always make it there and back on our lunch break and sometimes we got in trouble for being late, but I don't recall anyone ever saying it wasn't worth it. There was an In-N-Out three blocks from my college freshman year - I don't remember if this was the sole reason I chose that college, but it's possible - and I frequently ate two meals a day there.
My friend Tom and I saw The Big Lebowski in a theater in Boston one ice cold February night, literally the coldest I have ever been in my life. When the characters talked about In-N-Out burgers I suddenly wanted very badly to have one in front of me, and I realized why people who have moved to the East Coast long for those burgers so much.
When Elizabeth moved out here, almost two years ago to the day, her dad accompanied her and we all went to In-N-Out for lunch, his first time. (She already loved the place from previous visits.) He shook his head after a couple bites of his Double-Double and said "Oh man, this place would make a killing in New York."
The first car accident I was ever in was pulling out of an In-N-Out parking lot. The first drive-through I visited after I got my license at 16 was In-N-Out. My first kiss was... well, when it happens, I will go to In-N-Out afterwards.
OK, you get the point. These stories could go on for thousands of words. Norman Maclean wrote in his masterful A River Runs Through It: "Eventually, all things merge into one, and a river runs through it." I could make a similar statement about memories from the last twenty years of my life and how In-N-Out runs through them. (Admittedly, the prose would not be as elegant.)
And I'm not even one of In-N-Out's legendarily devoted fans. My friend Zach, however, is. He went to college in New York and I picked him up at the airport during Christmas and spring breaks our freshman year, and both times, before going home to see his family, we stopped at In-N-Out. Sophomore year, I helped him write a paper on symbols in advertising; he chose In-N-Out and it's palm-tree-and-hot-rod advertisements. He got an A, my one and only brush with Ivy League greatness.
So when Zach wrote a comment on my last post, about craving an In-N-Out burger, I felt it was time for a new post on In-N-Out. Everyone around here knows all about In-N-Out, so I will only touch on it briefly for the two of my seven readers - that's you folks in Rhode Island and Cincinnati - who might not be fully aware. Although even if you're not, you probably know something about it through cultural osmosis. Mikey wore an In-N-Out t-shirt in Swingers. When those three soldiers were captured in Kosovo in 1999 and Jesse Jackson helped with their release, the one from Southern California said he was anxious to get home and have a Double-Double. Gordon Ramsay and Sean Hannity both swear by their burgers, perhaps the only thing they have in common other than the fact that I can always get my friend Tracie riled up by mentioning their names.
Everything at In-N-Out is fresh; they have no freezers. They only offer burgers and fries. And there is a "secret" menu that once upon a time actually was kind of secret but is now all but listed on their menu board. (And, in fact, is listed on their website.)
Elizabeth - always one to join me in a food adventure, but even more so when it's In-N-Out - and I headed down to the In-N-Out in Alhambra for dinner with another friend of ours. It was Friday night and the drive-through line stretched down the block. Newer locations like this one, however, have inside dining, so that's where we sat. We got three Double-Doubles: two animal-style and one regular. We got three orders of fries the same way and sat down to wait, surrounded by the typical assortment of In-N-Out customers: high school kids, families, couples on dates, and three CHP officers. Nobody looked unhappy. Our food was up in about ten minutes.
In-N-Out's fries are not great. They are freshly cut potatoes, but they are always limp and sometimes undercooked. You can order them well done, and that does make them slightly better, but I prefer them animal style, with grilled onions, cheese and sauce. At any rate, the burger here is the main attraction: two patties, cheese, sauce, grilled onions, pickles, and some of the freshest lettuce you will ever have. This burger was great, just like it has been every one of the hundreds, possibly thousands of times I have eaten one.

After we finished, our friend remarked that she felt like a milkshake, so we all got them. Mine was vanilla. It had been a long time since I had had one of these. Damn, I forgot how good they are. I kind of wish I didn't rediscover that, because I could drink a couple of these every night.
I've written many times about the concept of a "good value." This dinner for the three of us cost just over twenty dollars; it would have been worth it at twice the price.
And the weekend ended the only way it possibly could: with an hour long episode of Huell Howser about In-N-Out. We had just eaten dinner a short while earlier but I said to Elizabeth: "I'm not gonna lie, I kinda want a Double-Double now." But I was stuffed, so after watching The Simpsons we headed back to In-N-Out only to get milkshakes.  But since we were there I figured well, you might as well at least get a hamburger. So I did. It was great. And I let my little buddy share my milkshake with me. (He loves In-N-Out, too.) 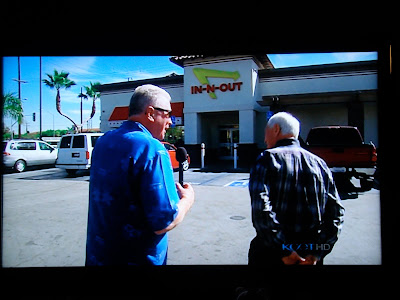 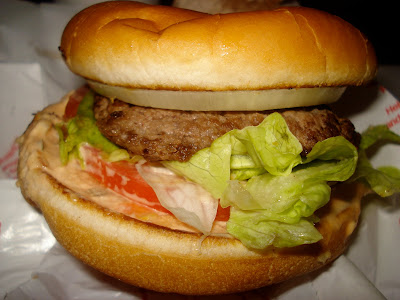 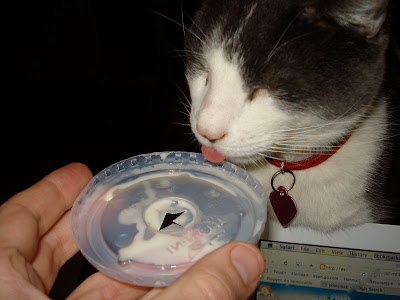 I thought for sure the story of In-N-Out in Temecula was coming out... Of course, that's more of a Paradise Lost kind of story.

This is a family blog. That story dies with you, Tyler, me, and Elizabeth.

I still remember that car accident. But, I remember it moreso because my lemonade spilled during the crash and my french fries landed on the floor. I felt betrayed when they expanded out of state- especially to Utah...

Ben and I once stopped at a Wendy's in Utah. It was bizarre. I won't go into all the details but every single person was putting "fry sauce" on everything they were eating.

You have made me so hungry for an In-N-Out! Can't we open one on North Lake?

Ya their fries suck but that still looks good

Mom: No, apparently you did not watch Huell last night (which does not surprise me; you've never understood his brilliance). "We" cannot open an In-N-Out anywhere, because they do not grant franchises.

Smith: I know many people who share your opinion. I would not go so far as to say they "suck" - I mean, they are freshly cut potatoes, I prefer that to most standard, frozen, sugar-and-salt-dusted fast food fries. But considering how good their burgers are, I don't understand why they don't make their fries better.

Myself, I'm partial to the bible verses printed on the cups and burger wrappers. Burgers are so much tastier with a little Jesus on the side.

I agree with Taco Bell about In n Out's Biblical reference. I think their food must be blessed somehow.
Btw, I like their Fries. They don't suck. They just tasted like Fresh Frys as opposed to French fries.

In-N-Out is always great. I've enjoyed it since my first visit to California. Apparently everyone loves In-N-Out, even kitties!