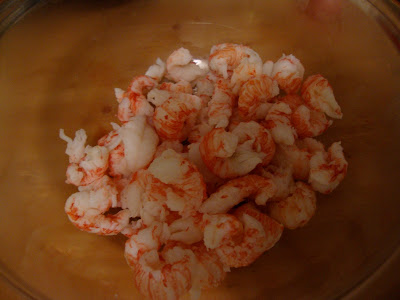 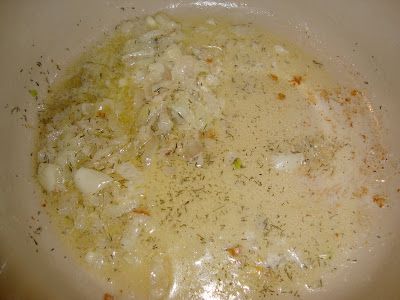 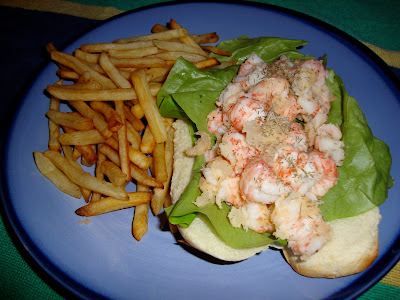 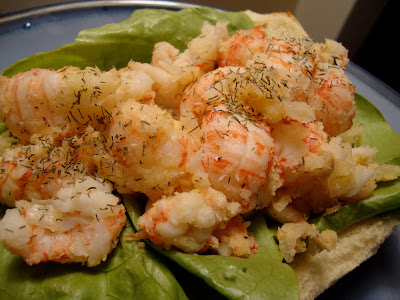 I wrote about langostino lobster rolls over a year ago, but I'm making them slightly different (not to mention taking better pictures) so I'm doing it again. Lobster rolls are pretty close to my favorite food. If I had to choose between eating pulled pork sandwiches or lobster rolls for the rest of my life... I would still choose pulled pork, but I would have to think about it for a minute.
But they're not the most affordable of meals on this side of the country. Less than seven years ago I used to buy one pound packages of frozen lobster at Whole Foods for $12.99; they're now over 20 bucks. Bristol Farms has very good lobster meat, unfortunately it's close to $60 per pound. (I only purchase that on the rarest of occasions, like Valentine's Day or UCLA basketball victories.)
But Trader Joe's - which in the last few years has climbed more than a few rungs on the ladder of indispensable things in my life - sells bags of langostino for $8.99. Do they taste exactly the same as lobster? No. Do they taste good? Yes. Are they a good value? Hell yes. I can make about four "lobster rolls" out of one bag for less than the price of one lobster roll at a restaurant - which, in California, is most likely using langostino meat anyway.
The previous time I posted about these, I mixed the langostino with diced celery and mayonnaise. It was delicious (although I went a little too heavy on the mayo) but this time I wanted to try something a little different. I thought I had a shallot -  the first picture on my new camera is of one. But after looking for a couple minutes I realized the picture was taken at my friend Tracie's house. Luckily she only lives one hundred yards away, so I was able to steal borrow a shallot from her.
I chopped up the shallot and sauteed it in a small Le Creuset pot (also Tracie's, although she is the one who brought it over here and has just never taken it back, so that's not theft) with some butter. I stirred in some thyme and dill as well. After simmering for a few minutes I spooned it over the langostino.
I toasted hot dog buns in the oven for just a minute, enough to get them slightly warm, then placed a couple pieces of butter lettuce in each and topped it with a big handful of langostino. They were great. I actually liked it more this way than with mayonnaise; the texture and flavor of the shallots were a nice contrast to the langostino.
I may not make the rolls exactly this way from now on, but definitely some variation of it. I already have some ideas.
Posted by JustinM at 10:31 AM

Those look awesome! I'm too scared to cook expensive stuff. Last night I embarrassed myself and cooked $3.50 Walmart ribs for my friends and they came out pretty horrible. I guess I'll just stick to Jack in the Box.

Talk to you soon man.